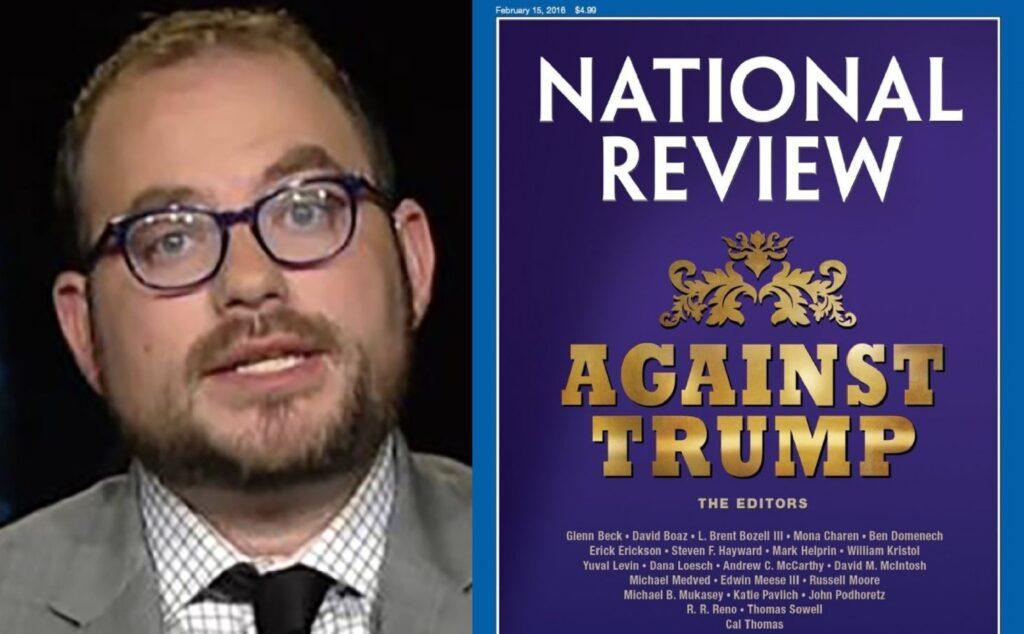 The low-status “Never Trump” legacy paper National Review has egg all over its face after it attempted to earn some brownie points by defending Matt Yglesias, a left-wing blogger for Vox Media. Yglesias had come under attack from colleagues for supporting a letter in Harper’s Magazine decrying “cancel culture.”

The letter itself, signed by such bland figures as J.K. Rowling and Stephen Pinker, might have been a bit ridiculous, but it does serve as a sign that the well-behaved and slightly less crazy left are finally worried the cancellation mobs are coming after them.

Of course they’d never lift a finger for anyone who actually gets cancelled for genuinely challenging the system.

The Venn diagram of people who just signed that Against Cancel Culture letter and those who will mention Stefan Molyneux being banned will be two wholly non-intersecting circles.

As ineffectual and disingenuous as the Harper’s letter was, it was still too much for Yglesias’s boss Ezra Klein, head of the rambling, sub-intellectual leftist blog, Vox. Klein made it very clear that he disapproved of Yglesias, and gave him a not so-subtle reminder who is in charge. The National Review predictably rushed to the aid of the damsel in distress, mewling:

We can think of a dozen reasons to criticize Yglesias, but the Vox writer currently is under fire for signing a letter critical of “cancel culture.” For criticizing cancel culture, Yglesias might very well end up being canceled. [National Review]

Several other colleagues of Yglesias disapproved with his signing the Harper’s letter. Yglesias’ colleagues took offense, but the “conservatives” of the National Review saw opportunity. Here a leftist was being attacked for being slightly less hostile to free-speech than his radical colleagues.

This expression of solidarity on National Review’s part would presumably have the effect of winning the approval of their cultural superior, and perhaps even earn them a seat at the coveted table of leftist blogger “thought leaders.”

In the National Review’s dreams, they would be chummy with Yglesias, who would accept them as the “good conservatives” as they joined together arm-in-arm in support of the cancelling of people who actually threaten the corrupt ruling class.

Not only was Yglesias not thankful for the National Review’s display of generosity, he actively denounced and disavowed them!

You see, in its letter defending Yglesias, the National Review made the mistake of “dead naming” one of Yglesias’ disapproving colleagues at Vox. For the uninformed, dead-naming refers to the (now serious) offense of calling a transgendered person by his/her pre-transition name. From an outraged observer:

So Rich Lowry of National Review defends Matt Yglesias and in the process misgenders (purposefully, to be an asshole)@emilyvdw, one of my most treasured friends in this profession. Just one more bit of proof of how ostentatiously shitty modern conservatism has become.

Rather than side with the National Review for defending him, Yglesias spurns their gesture of help as “gross”, and comes to the defense of the transgendered colleague who earlier tried to throw him under the bus.

National Review “conservatism” is so repulsively low-status that a leftist blogger like Yglesias can’t even bring himself to positively acknowledge their defense of him.

Instead of earning brownie points for brown nosing Yglesias, the National Review is derided as “gross” for referring to a man who decided to identify as a “woman” by his actual, original man’s name!

But it isn’t really the dead-naming that’s gross to Yglesias. The idea that the National Review even thought they could get a positive pat on the head truly repulses Yglesias.

National Review thinks of culturally dominant leftists the way that a socially awkward nerd thinks of an attractive woman, and the “attractive woman” in this case was offended that the cloying nerd even thought he had a chance! This damsel-in-distress is what National Review conservatives consider “elite”

National Review’s damsel-in-distress happens to be a leftist blog slob who enjoys a bit of status because his allegiance is to the corrupt ruling class that presently runs the United States.

There is nothing elite about him or people like him, which makes the efforts of “conservatives” to suck up to them for a chance at the big boys table all the more obscenely contemptuous.

There could be volumes written about the near total failure of legacy “conservative” institutions to prevent or counteract the cultural ascendancy of the left.

Such institutions and those who work for them have completely internalized the moral framework of the left, and can’t seem to break the disastrous habit of arguing on the enemy’s terms.

Someone on the right accused of “racism” will never gain the upper hand with the “clever” trick of turning the accusation around and arguing that the “democrats are the real racists.”

It isn’t effective and only serves to reinforce the legitimacy and moral valence of the term that exists to demonize and demoralize Americans who stand in the way of the left and the ruling class that controls them.

A second, and related problem is the manner in which those who work as professional “conservatives” have completely internalized their inferior cultural and social status in relation to their counterparts on the left. By design, institutional conservatism is meant to play second fiddle to the dominant culture.

The role of “professional conservative” attracts mediocrities afflicted with severe status anxiety, always eager for little scraps of approval from their counterparts on the “other side.”

President Donald Trump’s rise to the Oval Office offers conservatives a departure from such pathetic forms of engagement with the left. Rather than suck up to the apparatchiks of the corrupt ruling class, Trump mocked them and treated them with the contempt that they so richly deserved.

This, of course, is why the geldings at organizations like the National Review became Never Trump. In mocking the ruling-class apparatchik media, Trump was by extension mocking the fecklessness of the low-status “conservative” suck ups.

People like Yglesias and the corrupt ruling class he supports do not need to be pandered to, they need to be mocked. These people are dumber, uglier, and weaker than those on the right resisting them.

The only thing more pathetic than the dumb, ugly, and weak defenders of our corrupt ruling class are the establishment “conservatives” desperately angling for their respect.

Do not do that. Do not be the National Review.

One response to “Never Trump Magazine Sucks Up to Left-Wing Journo, Gets Abjectly Humiliated”