In 2008, disastrous policies by America’s political and financial elite caused the worst financial calamity since the Great Depression. Ever since that crash, the American middle and working classes have been in decline. But the plutocrat class came out of the disaster richer and more powerful than ever. So it’s hardly surprising that right now, they’re laying the groundwork for another housing bubble, and another disastrous crash. And Joe Biden’s presidential campaign is egging it on.

The New York bank said it is committing $30 billion over the next five years toward programs that include earmarking more money for getting Black and Latino families into homeownership and providing additional financing to build affordable rental housing units.

“Systemic racism is a tragic part of America’s history,” said JPMorgan Chase CEO Jamie Dimon in a statement. “We can do more and do better to break down systems that have propagated racism and widespread economic inequality.” [AP]

Specifically, JPMorgan’s plan is to create thousands of new mortgages based not on creditworthiness but on skin color:

As part of our commitment to promote and expand affordable housing and homeownership for underserved communities, we will take actions to increase equity, affordability and access to housing by:

JPMorgan’s new loan pledges are based on the idea that its lending practices have been racist, and that it has so far refused to provide profitable home loans to minority communities for no other reason besides prejudice. Its solution is to lower standards to provide loans it previously would not have, in the name of greater equality.

JPMorgan isn’t just pledging its own money to this foolish cause. In the company’s announcement, it vows to lobby Congress for changes to the law it says will generate another $500 billion in mortgages for those whose credit is currently too poor to obtain one.

It is no exaggeration to say that this is the exact recipe for another calamitous housing crash and economic disaster for all Americans. And we know this because it’s the same strategy used prior to the 2008 housing crash.

For decades, both political parties have sought higher home ownership rates in America. This isn’t a bad thing. People who own their own homes are more invested in their communities, have a stake in society, and have something to be proud of. But home ownership can only be effectively increased by keeping houses affordable, and by providing the wages and economic stability people need to make payments on them.

Instead, JPMorgan is pushing more debt and lower standards for favored races and acting like this magically will not result in a cascade of defaults by borrowers.

In a 2002 speech at St. Paul AME Church in Atlanta, President Bush outlined his plan for increasing minority home ownership in America:

It is stunning how much overlap there is between Bush’s plan and JPMorgan’s. Bush blasted down payments as a “barrier” to buying a home, as though they are an arbitrary obstacle rather than a critical sign of a borrower’s ability to save money and build wealth. Now, 18 years later, JPMorgan is promising a new “down payment and closing cost assistance fund.”

Just like JPMorgan, Bush explicitly racialized his push for greater home ownership. “By the year 2010, we must increase minority home owners by at least 5.5 million,” he said in his 2002 speech. Companies were urged to cut standards to achieve Bush’s mission, and cut standards they did. In one infamous case, a California strawberry picker earning $15,000 a year was handed a $720,000 mortgage. By 2006, almost a quarter of all new mortgages were subprime, higher-interest loans given to individuals who didn’t meet conventional lending standards.  Nearly half of all black and Hispanic borrowers assumed subprime mortgages.

For a while, Bush’s magical thinking worked. Millions of easy loans were handed out to people who previously wouldn’t have received them. The home ownership rate reached a record high of 69.2% in 2006:

As subprime loans piled up, a few voices warned that banks were courting calamity. They were met with derision and mockery. In 2007, economist and University of Chicago professor Austan Goolsbee wrote a smug New York Times op-ed ridiculing critics of the sub-prime lending craze and suggesting they were racist:

[T]he mortgage market has become more perfect, not more irresponsible. … As Professor Rosen explains, “The main thing that innovations in the mortgage market have done over the past 30 years is to let in the excluded: the young, the discriminated against, the people without a lot of money in the bank to use for a down payment.” It has allowed them access to mortgages whereas lenders would have once just turned them away.

The Center for Responsible Lending estimated that in 2005, a majority of home loans to African-Americans and 40 percent of home loans to Hispanics were subprime loans. The existence and spread of subprime lending helps explain the drastic growth of homeownership for these same groups. [New York Times]

It took just a few months to expose Goolsbee’s idiocy. Housing prices peaked in 2006, and as they declined, millions of Americans were underwater on their mortgages. Americans unable to make payments were also unable to pay off their mortgages by selling their houses. The housing bubble popped and unleashed a global economic calamity.

The maze of collateralized debt obligations and credit-default swaps on Wall Street obscures the heart of the 2008 crisis: Americans given home loans they were unable to afford. No matter how much idiots shriek about racism, it turns out that the main reason low-income households of any race don’t get loans is that they are much less likely to repay them. According to the Chicago Federal Reserve, by 2006 fully 20% of subprime loans were going into default within a year of being issued. 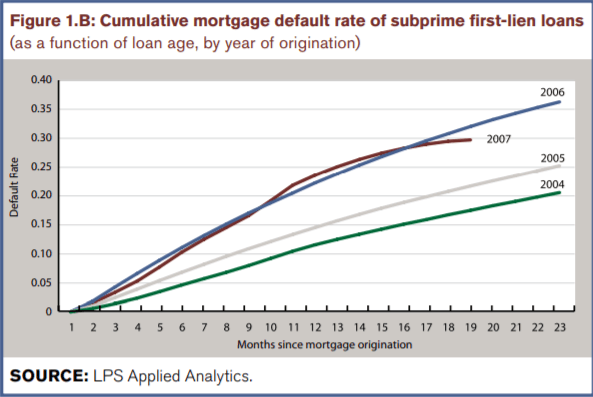 These underwater loans were heavily concentrated among the minority homeowners President Bush was obsessed with helping. Among Americans who received home mortgages between 2004 and 2007, by 2013, 31% of Hispanic borrowers were delinquent or had been foreclosed on. For black borrowers, the figure was 28.2%. For Asian and white borrowers, the delinquency rates during these crisis years were just 14.7% and 12.1%, respectively. It wasn’t racism that caused different home ownership rates. It was credit-worthiness. When banks and the federal government made the politically-motivated decision to ignore reality, everyone paid the price.

And what about Austan Goolsbee, who cheered on this calamity? Just like the architects of Bush’s Iraq War, Goolsbee was rewarded with tremendous professional success for pushing one of the worst policies in American history. He chaired President Obama’s Council of Economic Advisors, and afterwards returned to his cushy position at the University of Chicago. Now, he’s a top advisor to the Biden campaign on how to close the racial wealth gap. When terrible ideas with catastrophic consequences aren’t punished, they return with a vengeance.

By itself, JPMorgan’s newfangled idiocy is not enough to bring the economy to its knees. But the company’s action is reflective of the political winds. Kamala Harris’s presidential campaign (using Joe Biden as a puppet) promises to federalize credit reporting — not to improve accuracy, but to remove racial “disparities:”

Today’s credit reports, which are issued by just three large private companies, are rife with problems: they often contain errors, they leave many “credit invisible” due to the sources used to generate a credit score, and they contribute to racial disparities, widening the African American homeownership gap. Biden will create a new public credit reporting agency within the Consumer Financial Protection Bureau to provide consumers with a government option that seeks to minimize racial disparities, for example by ensuring the algorithms used for credit scoring don’t have a discriminatory impact. [JoeBiden.com]

The Harris campaign also vows to expand the Community Reinvestment Act to require more lending in low-income areas, while at the same time pressuring banks not to raise standards — even in response to the COVID-19 economic downturn.

JPMorgan isn’t blazing a new trail. It’s merely getting out ahead of what the Democratic Party will be demanding of it anyway. And it knows that as a “too big to fail” institution, responsible Americans will be handed the bill when the jig is up.

There is nothing charitable about any of this. There is a reason so many religions put usurers in the deepest bowels of Hell. Giving people loans they can’t afford is destructive and evil. Recipients either default and lose their homes, or they suffer for years trying to pay off burdensome debts. When too many borrowers default, banks falter (until taxpayers bail them out), and the economy fails.

There are only two ethical and sustainable ways to increase black and Hispanic home ownership. Either houses must be made cheaper, so more can afford them, or blacks and Hispanics must be economically elevated so they can more reliably pay off their loans. Ignoring reality helps nobody. In the long run, it will bring ruin to the entire country.

It’s tempting to ascribe JPMorgan’s stunt to simply forgetting the past. But another, more sinister possibility is worth considering. After the 2008 mortgage implosion, the federal government bailed out the financial industry to the tune of $634 billion. JPMorgan received $25 billion of that, and its executives got to keep all the bonuses they made blowing the bubble. The company may simply have concluded that, as long as it remains in Washington’s political graces, it will always be eligible for another bailout. In America’s increasingly corrupt  version of “capitalism,” political connections and support from fellow globalists matter far more than honest success on the free market. After all, a few billion in bad loans is a tiny price to pay to secure a permanent spot in America’s oligarchy.