More than a year has passed, but Kyle Rittenhouse still isn’t home free. The Illinois teenager is still in danger of spending the rest of his life in prison, if convicted on two homicide charges brought by the state of Wisconsin.

In a Friday court hearing, prosecutors revealed their strategy for putting Rittenhouse away forever: Tar him as a thought criminal.

Prosecutors in the Rittenhouse case asked the judge allow them to admit evidence of Rittenhouse’s meetings with members of the Proud Boys — including photos taken at a Mount Pleasant tavern showing him posing with members of the group, a right-wing organization that has been involved in violent protests and counter protests round the United States.

The government’s strategy to destroy Kyle Rittenhouse’s life doesn’t just matter for his own case. It matters because these same strategies will be used to systematically strip the right to a fair trial from any American targeted by the ruling regime.

A few core facts, to jog your memory: On August 23 of the Summer of Floyd, Kenosha police shot Jacob Blake as he resisted arrest and attempted to drive away with children the police believed he was kidnapping. Though Blake survived, Kenosha erupted into “fiery but mostly peaceful protests” that left the downtown scorched. 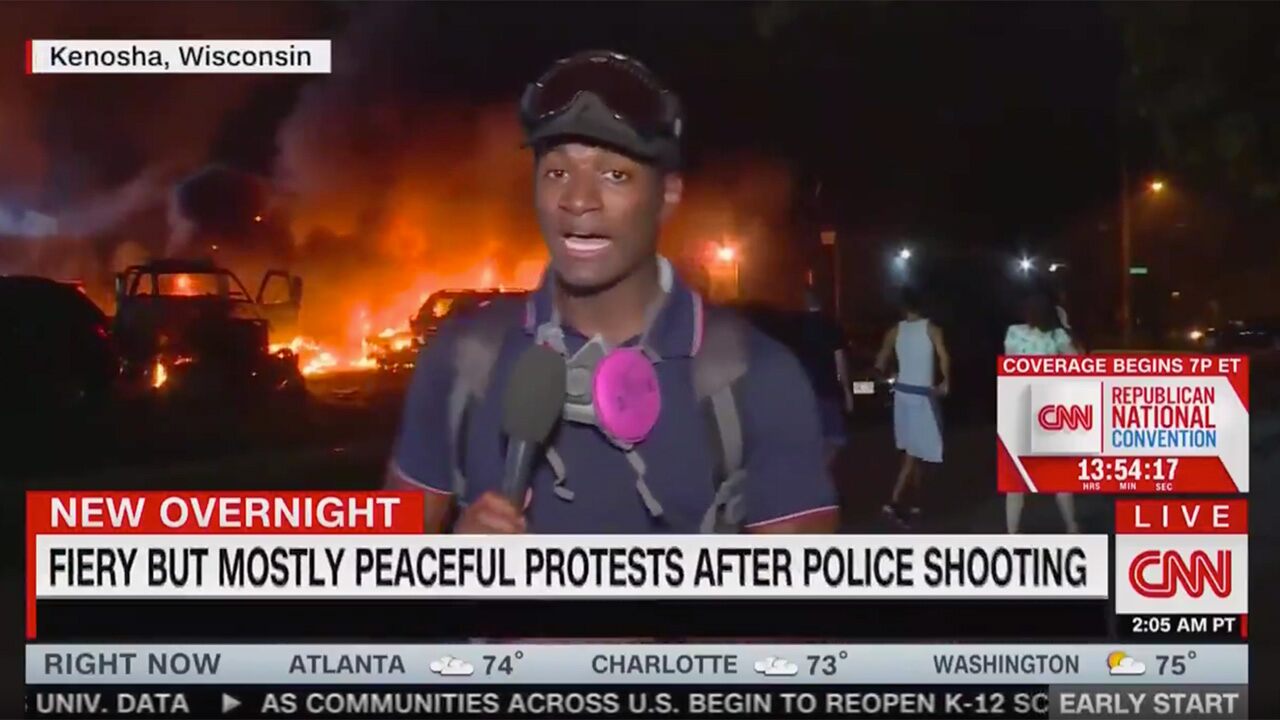 On the third night of the riots, Rittenhouse, who turned out to protect local businesses and clean up vandalism, shot and killed two people amid the carnage.

Eyewitness accounts and video footage are clear about what happened. One of the rioters, an unstable man named Joseph Rosenbaum, began pursuing Rittenhouse. As Rittenhouse fled, he heard shots fired behind him (by whom remains unclear). Rittenhouse turned around and saw Rosenbaum lunging toward him (and toward his gun). Rittenhouse shot and killed Rosenbaum.

Then, as Rittenhouse continued attempting to flee the scene, several more people attacked him. After tripping to the ground, Rittenhouse shot and killed Anthony Huber after Huber hit him with a skateboard and tried to grab his rifle. He wounded Gaige Grosskreutz after Grosskreutz lunged for him holding a handgun.

The video footage in both shootings is crystal clear. The three people Rittenhouse shot were all attacking him. Revolver News was one of the first media outlets to unequivocally argue that Rittenhouse acted in self-defense. Eventually, other media outlets came around and even the New York Times conceded that Revolver’s analysis was in essence correct.

It is simply indefensible to criminally charge Rittenhouse in light of the actual facts of his case. But charged he was, with two counts of first degree murder (and a bevy of lesser charges).

So what was the government’s plan? Simple — use a relentless character assassination campaign to make the clear fact of Rittenhouse’s self-defense irrelevant.

The government revealed its strategy in detail on Friday, during a preliminary hearing on the evidence that will be allowed during the November trial. Law and Crime reporter Colin Kalmbacher  described the hearing at length on Twitter.

Phase 1 of the prosecution’s plan is to link Rittenhouse to the Proud Boys, and accuse him of racism for making the “okay” sign in a photo.

Binger says Rittenhouse's ideology aligns with the Proud Boys–particularly the intent to use violent means to secure political outcomes. Says he was out in Kenosha that night because of his political beliefs. Repeatedly tying Rittenhouse to the Proud Boys' violent beliefs.

“Most everyone there was there because of their beliefs, one way or the other, in regards to the shooting of Jacob Blake,” prosecutor Thomas Binger argued. “Chaos tourists like the defendant were drawn like a moth to the flame to our community. He was drawn to this incident because of his beliefs, which align with the Proud Boys. They take pride in using violence to achieve their means.”

That is the argument Wisconsin prosecutors wants to make against Rittenhouse. If Rittenhouse sympathizes with the Proud Boys, if he is politically opposed to wanton looting, then he doesn’t have the right to defend his community or himself. If he wants to defend innocent people and their property from a rampaging mob, he is a “chaos tourist.”

“If this organization embraces the defendant after the fact because he’s lionized because of his behavior, that is not something that the jury can make anything out of that would be lawful,” Schroeder said.

But dubious Proud Boys connections aren’t Wisconsin’s only attempt to smear Rittenhouse. Prosecutors also want to introduce video from several weeks earlier, which captures Rittenhouse’s response to what he believed to be armed robbery.

To any sane person, Rittenhouse is just expressing the wish that the criminals who were casually pillaging and terrorizing cities and small businesses might be brought to justice. Tens of millions of Americans likely agree. Rittenhouse simply expressed this wish in a visceral way as a 17-year-old casually chatting in his car.

But in a filing last month, prosecutors spun this brief video clip in an absurd direction.

The defendant saw something, jumped to a conclusion based on exactly zero facts, and threatened to kill someone based on baseless assumption and wrongful interpretation. … The video also demonstrates that the defendant fervently sought to insert himself as an armed vigilante into situations that had nothing to do with him. [Fox 6]

Of course, Rittenhouse didn’t “threaten” to kill anybody. This is a malicious lie. But on Friday, the government took an even more deranged position. From Kalmbacher’s thread:

“Not even the police would be justified” killing people in such circumstances. Binger brings it back to the night of the killings. “He’s running around and trying to stop people from doing things because he thinks they’re illegal. Maybe they are, maybe they’re not. Eventually he gets into a confrontation with Mr. Rosenbaum.” Binger: “That’s not his job. He’s 17.”

… “They are identical,” the government says–saying the CVS desire to kill assumed lawbreakers was basically the same as the night he actually killed two people. “Running around in all this, taking all this responsibility which he had no lawful authority to do and making assumptions,” Binger says, “it’s exactly the same fact scenario” as the night at the CVS because it goes to “motive and intent” to “be a vigilante that night” and… …”to use deadly force that no one is authorized to use in those circumstances.”

Binger says Rittenhouse went “even beyond what the police” are allowed to do. “It shows he is the type of person who takes the law into his own hands.”

“Maybe it’s illegal, maybe it’s not.” That’s the government’s preferred take on the mass rioting that turned downtown Kenosha into a burnt-out shell. It was none of Kyle’s business. When police stand down and let a mob rampage, it’s every good citizen’s job to do the same thing. People who prefer to stop criminals lose the right to self-defense if they are attacked. At one point on Friday, Binger even vilified Rittenhouse simply for calling 911 when he thought he saw a crime.

The prosecution even hoped to introduce evidence that Rittenhouse’s gun was purchased with coronavirus stimulus funds. What could be the purpose of this? None, except to hope that it somehow tars Rittenhouse with jurors. Once again, Schroeder scuttled the attempt, though he postponed a final ruling until the actual trial.

Even in this very trial, the government isn’t just interested in taking down Rittenhouse. In a move that is so extreme it is almost diabolical, Wisconsin prosecutors are demanding the names of everyone who donated money to support Rittenhouse’s bail fund.

How is a list of people who donated to Rittenhouse after the shooting relevant to whether he was committing a crime during the shooting? It isn’t, of course. What is relevant is that, if disclosed at trial, this list of donors would inevitably be leaked and donors hounded from their jobs, as already happened to Virginia police officer William Kelley.

Once again, Judge Schroeder has (for now) blocked the attempt, but the threat isn’t eliminated. Schroeder suggested that the government subpoena Rittenhouse’s mother for a list of donors. If the prosecution goes forward with the subpoena, the Judge will issue a final determination.

American patriots must not become complacent simply because, this time, a judge appears to be making the right decisions. Instead, it is essential to speculate what the result might be if this had happened just a few miles to the south, in Illinois, where the local judge might be vastly more hostile? What if this trial was taking place in California, or New York, or really any deep blue jurisdiction in any state of the country? Kyle Rittenhouse could easily be on his way to enduring the railroading of the century.

Eventually, somebody will experience that railroading. And when this happens, we can’t say that we weren’t warned.

In effect, Wisconsin’s case against Rittenhouse is both a reversal and an expansion of the now-widespread idea of “hate crimes.” Originally, the concept of a “hate crime” made relatively less severe crimes (such as assault or vandalism) into more severe ones, based solely on the supposed thoughts and beliefs of the perpetrator.

But now, the concept has expanded. Based solely on one’s alleged personal beliefs, actions that aren’t criminal at all now become the most severe crimes imaginable. The treatment of Kyle Rittenhouse portends a near-future in which those who don’t profess Regime-approved opinions effectively lose the right to self-defense entirely.

Patriots now face a future in which they’re not only treated as potential domestic terrorists by the Globalist American Empire’s national security apparatus, but they are demoted to second class citizen status in the fundamental sense that they cannot expect to enjoy equal protection under the law.

Yet instead of standing up for Kyle Rittenhouse, much of institutional conservatism prefers to forget about him. The National Rifle Association in particular has studiously avoided Rittenhouse’s case. It hasn’t fundraised for him, it hasn’t agitated on his behalf. This is a grievous mistake, just as it was a mistake for the NRA to ignore the McCloskeys, who ended up pleading guilty to minor charges for defending their own home from a braying mob.

What is the point of the Second Amendment if only the politically correct are able to use their firearms in self-defense?

If the Second Amendment only protects the right of overweight fifty-something men to stockpile AR-15s and playact Rambo in their basements, it means very little. For the Second Amendment to mean anything at all, it must protect the right to defend oneself, one’s property, and one’s community. In Wisconsin right now, prosecutors are trying to destroy that right. We ignore their attempt at our peril.