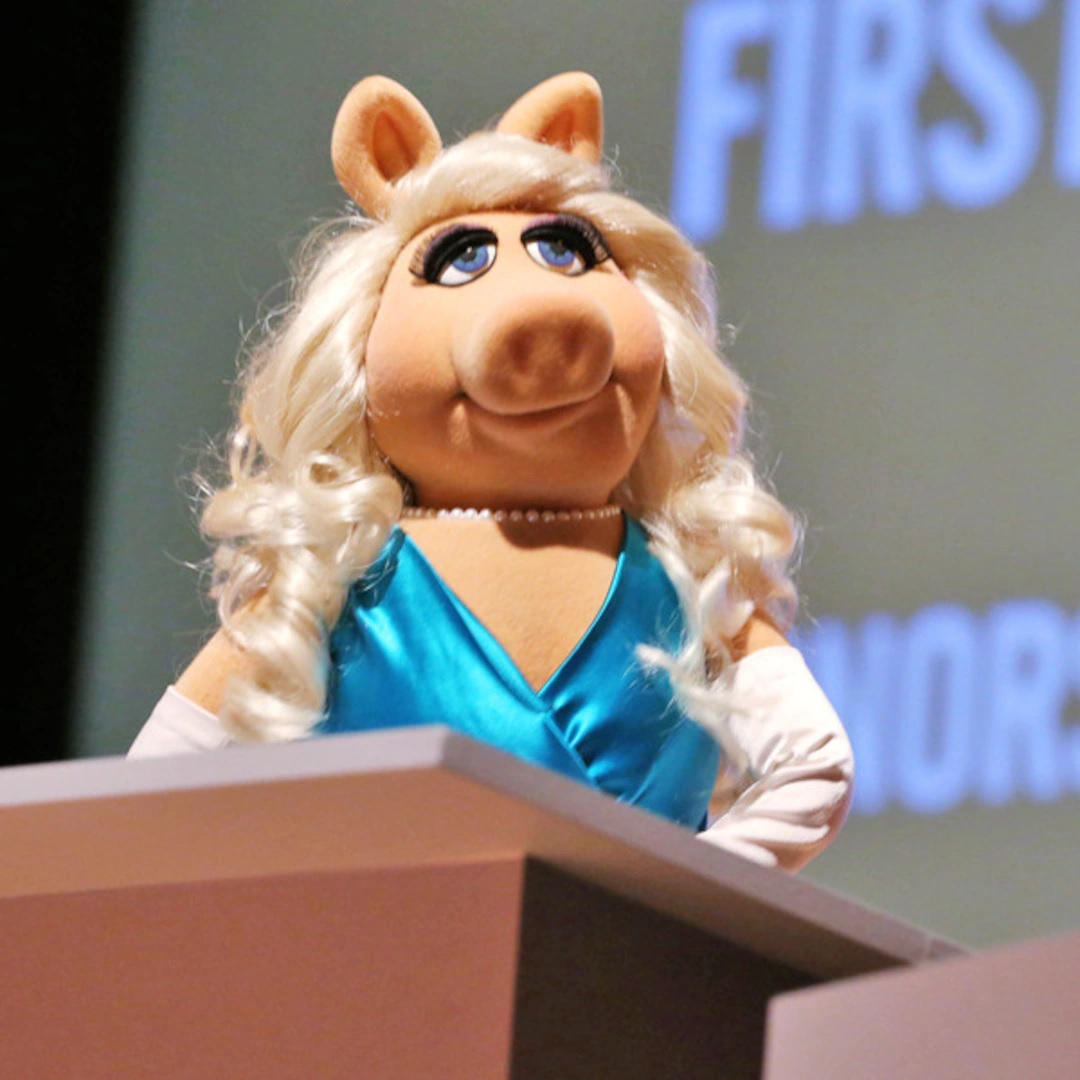 Liz Cheney should be ashamed of herself! pic.twitter.com/msNiznDBx7

Here’s a sound bite for you: Bring it. pic.twitter.com/VmET1JUs12

Ah. If only Twitter likes from liberals were votes, Liz would already be the first female president.

It was not just a victory for Hageman against Liz, it was a shellacking. There will be absolutely zero room for the crooked mainstream media to claim a moral victory.

Though obviously those press liars will try.

With nearly the entire vote counted, Liz Cheney Liz Cheney is now down by an astonishing 37.4 points. See here from NBC News.

At one point, Dave Wasserman thought that perhaps a 40-point shellacking was in the cards.

As badly as Cheney is getting clobbered now, her deficit is on track to approach 40 pts and she's poised to lose every county except Teton (Jackson Hole). #WYAL

Wasserman poured cold water all over the idea that Liz Cheney could be a serious contender for president that would harm Trump’s ability to crush the nomination.

The idea that Cheney could be a serious factor in a 2024 GOP primary or would siphon votes from Trump as an independent remains as preposterous as the idea this #WYAL primary would be competitive.

Looks like the extremist liberal LinkedIn co-founder Reid Hoffman’s pipe dream is up in smoke, although we’d love to see him waste his money.

Reid Hoffman's political adviser, Dmitri Mehlhorn, "said he and the donors he works with would consider funding a Cheney presidential bid."

Says they would "take seriously" a $10m to $20m campaign to weaken Trump in a GOP primary in 2024.@pkcapitolhttps://t.co/MRo0LBZxH6 pic.twitter.com/VlvqvLI5zR

More from the Washington Post on this harebrained idea:

Traditional conservatives opposed to Trump have already discussed the possibility of Cheney running for the White House. “That chatter was very strong even before that Dick Cheney commercial,” Dmitri Mehlhorn said, referring to a campaign ad that ran nationwide on Fox News and featured the former vice president denouncing Trump.

Mehlhorn advises several donors across the political spectrum who are opposed to Trump, including the billionaire co-founder of LinkedIn, Reid Hoffman. He said he and the donors he works with would consider funding a Cheney presidential bid.

In that regard, Cheney will spend the months after the committee concludes its work later this year figuring out her next steps. That might be launching a political organization that focuses on Trump, or some think-tank work matched with media appearances.

But, for certain, Cheney and a small but influential bloc of anti-Trump Republicans have decided that there must be a 2024 candidate who will run as an unabashed opponent of both the ex-president and other contenders who spew his mistruths about the 2020 election.

This anti-Trump group fears a repeat of the 2016 campaign, in which rivals refrained from attacking Trump’s unorthodox behavior and positions until it was too late. The emerging 2024 Republican presidential field consists of the former president, his allies looking to emulate him and a collection of other Republicans courting non-Trump voters but without forcefully denouncing Trump.
Cheney and her crowd want a candidate who would serve merely as a political kamikaze, blowing up his or her candidacy but also taking down Trump.

“You need that. I think it’s got to be somebody that’s willing to take the boos, take the yells,” Rep. Adam Kinzinger (Ill.), the only other Republican on the Jan. 6 committee, said in a recent interview. “Somebody [who] can stand on the stage and just tell people the truth, I think that would have a huge impact.”

Mehlhorn, the adviser to anti-Trump donors, said that if Cheney were to approach them “and say, you know, with an extra 10 million, I can make sure that Republican voters are reminded of how bad Trump is in a way that might allow someone else to emerge from the primary or might weaken him for the general, but I need another $10 or $20 million — look, we would take that seriously.”’

Lol. Perhaps she can do better than 2 Percent Jeb?

“I’m an America First candidate,” Hageman told me in a June interview, explaining why she would have voted against the $40 billion aid package to Ukraine that Cheney supported. Wyomingites, she says, care about border security, inflation, and protecting energy jobs. “I think about what Americans need. Liz Cheney thinks, What does Lockheed Martin need?”

When asked recently about the biggest challenge facing Wyoming, Cheney gives three answers. The first plays to her original brand as a foreign policy hawk: She refers to “threats” from an updated Axis of Evil, “Russia, North Korea, China, and Iran.” The second challenge is the battery of issues that ordinary Wyomingites actually care about: Biden’s economic, energy, and tax policies, which are “hurting our families and hurting our communities.” Cheney’s final answer is an appeal to her new brand: the “toxicity and vitriol […] tearing our country apart” and a lack of “serious leaders,” which is to say, Donald J. Trump, and all his works, and all his empty promises. Cheney doesn’t name Wyoming in her answer.

Harriet Hageman, by contrast, claims that Wyoming citizens are most concerned with “inflation, the open border/illegal immigration, and the protection of our fossil fuel industries.” She said that these issues are interrelated: “the government’s role in our lives is to secure our rights and interests,” but the federal government—not just the Biden Administration—has adopted policies that “increase the cost of food, housing and energy.” Which is to say, according to Hageman, “our challenge” is the fact that we’ve lost “the basic understanding that government is of, for, and by the people.”

Read the rest here from the American Conservative…

Good riddance to Liz Cheney, a carpetbagger who never even took a paycheck in Wyoming, and is obsessed with the Sunday Talk Shows and whatever the D.C. elite is currently chattering about.

Of course, we haven’t heard the last from Liz. The establishment’s regime media outlets are running endless ad nauseaum thinkpieces reminding us that Liz Cheney’s career is not over. 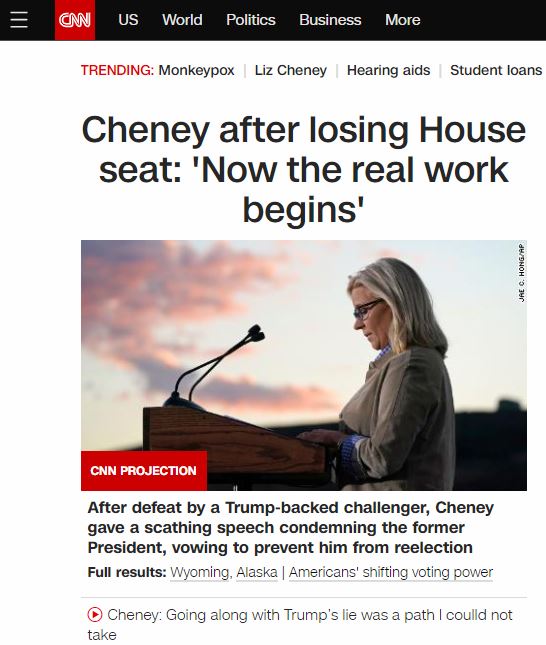 Of course, shameless Liz is currently taking a moral victory lap. Her ambition knows no bounds.

Folks, @RepLizCheney / @Liz_Cheney, in one of the most delusional acts ever showcased by a politician, compared herself to Abraham Lincoln and Ulysses S. Grant in a speech delivered after losing an election by 30 points (current).

What a fucking delusional idiot.

But who cares? No patriotic American is going to listen to her forthcoming (probably) podcast with Adam Kinzinger, or watch her babble on Joy Reid’s MSNBC show.

Good riddance Liz! One more Bushie down the drain…