A bunch of Elon Musk’s text messages hit the docket today in Twitter v. Musk. Most of them identify sender & recipient, but this one, apparently about reinstating Trump, does not. pic.twitter.com/GqOWBsYDJE

Okay, now let’s check and see what Revolver wrote just last April in an article entitled, “The Battle of the Century: Here’s What Happens if Elon Musk Buys Twitter”:

[Elon] Musk should simply buy a controlling stake in Twitter itself. He could certainly afford it. At $31 billion, Twitter’s market cap is less than 15 percent of Musk’s current net worth. Even if one regards Twitter stock as entirely worthless, Musk could theoretically buy a controlling stake in it and still be the world’s richest man by fifty billion dollars, and free speech would be restored to the “land of the free.”

But in practice, it’s not that easy. In fact, one would be hard pressed to imagine a project more dangerous and difficult than restoring free speech to a major tech platform like Twitter. At the same time, it’s hard to imagine a more worthwhile project. Restoring genuine free speech would do more for patriotic Americans than the GOP taking back the White House in 2024, and it would pose a greater threat to the ruling Regime than anything Russia, China, or Iran might plausibly do.

Free speech online is what enabled the Trump revolution in 2016. If the Internet had been as free in 2020 as it was four years before, Trump would have cruised to reelection. Massive censorship and suppression are the tools needed to prop up Covid tyranny, the Ukraine war fever, and the idea that Lia Thomas is a “woman.” America’s decrepit and illegitimate ruling class intuitively understand this: Absolute freedom of speech, or even the speech norms that prevailed a mere decade ago, would instantly cause the American regime as we know it to crumble.

In short, transforming Twitter back into a real free speech platform would represent nothing less than a declaration of war against the Globalist American Empire.

None of the above is meant to dissuade Elon musk or any other brave billionaire from purchasing Twitter and liberating America’s digital public square. The path above is not certain, and while the American security state is powerful, it is also incompetent, and anything but invincible. The Globalist American Empire will never be brought down unless people like Elon Musk are ready to step up to the plate with genuinely bold, risky, and meaningful moves like buying and liberating Twitter.

But it will not be easy. It will be a war. Let the battle begin. 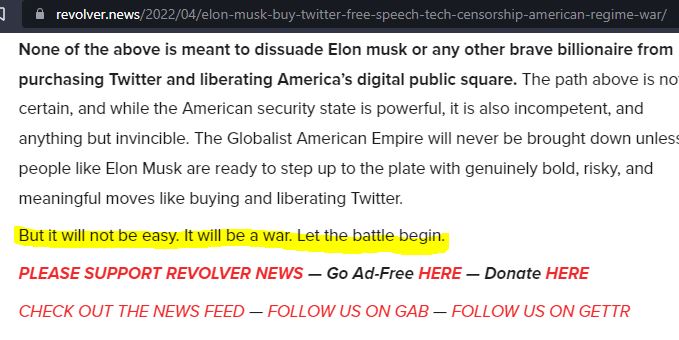 There you have it. Elon Musk a confirmed Revolver reader.

Darren Beattie expounded on our article on a great segment on Tucker’s show back in mid-April:

While it is encouraging that Elon Musk and his close confidants are paying attention to Revolver’s reporting, in the months since, it appears he might have bit off more than he can chew.

Sadly, it looks like Elon Musk did not take our advice, and that he is backing away from the hostile takeover of twitter entirely. As we said in our piece linked above, a serious effort to restore free speech on Big Tech communications platforms like Twitter amounts to a declaration of war on our corrupt, illegitimate regime. With these stakes involved, its a dangerous game, and apparently above the paygrade of one of the richest men in the world.

As Revolver’s Darren Beattie has repeatedly emphasized lately, it’s extremely daunting for any single man, no matter how powerful and rich, to go up against the full force of the Globalist American Empire and its media, bureaucratic, academic, NGO/nonprofit, and military-intelligence arms.

To be an American patriot in support of the founding American virtues, like freedom of speech, one almost has to become a hated exile in his own country.

READ MORE: Darren Beattie challenges American patriots: can one be a nationalist in the Globalist American Empire?

Elon dipped his toes in the arena, felt the heat, and backed out, and will likely go back to his comfortable position as glorified IT support for the regime. Who knows, maybe the slight taste of glory he felt when he for a brief moment dared to attempt something truly great will inspire him to put all his chips on the table, play for keeps, and become a man of history. But we’re not holding our breath.

Bonus: here’s an interesting exchange between Elon Musk and Jack Dorsey, who also got in way over his head and had his company ripped away from him by the Regime: