Nikolai Mushegian is a major crypto developer and contributor to dozens of projects in the crypto world.

CIA and Mossad and pedo elite are running some kind of sex trafficking entrapment blackmail ring out of Puerto Rico and caribbean islands. They are going to frame me with a laptop planted by my ex gf who was a spy. They will torture me to death. 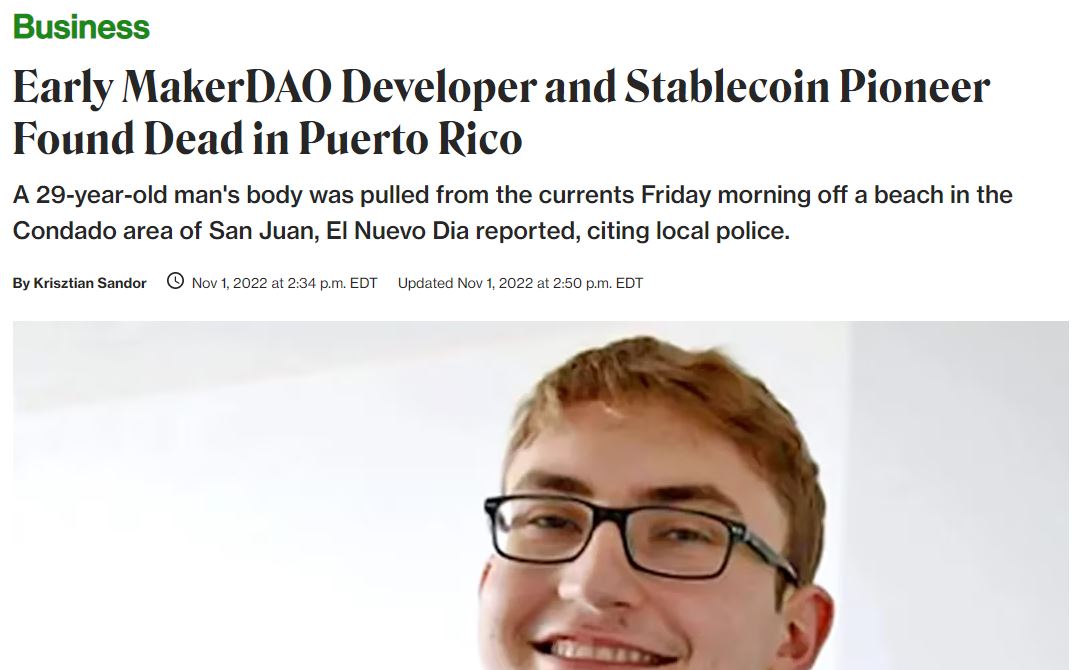 Nikolai Mushegian, an early developer of MakerDAO, the largest decentralized finance protocol, as well as a contributor to multiple crypto projects, was found dead on Friday in San Juan, Puerto Rico, according to local news outlet El Nuevo Dia.

According to the news article, a 29-year-old man identified as “Nicolai Arcadie Muchgian” was dragged by water currents close to Condado Beach. Beach patrols managed to retrieve his body from the ocean but there were no vital signs. The area is known for its dangerous strong oceancurrents that have caused several fatalities, according to the paper. (CoinDesk obtained a copy of a press release from the Puerto Rico Police Department consistent with the details reported by El Nuevo Dia.)

Mushegian contributed to the development of multiple blockchain projects and was heralded as a prolific architect of blockchain-based decentralized financial platforms and stablecoin systems.

Most notably, he was MakerDAO founder Rune Christensen’s original technical partner on the project and worked on the protocol and its decentralized stablecoin DAI between 2015 and 2018, according to his personal website. He was not involved in the protocol’s development lately, a MakerDAO contributor told CoinDesk.

Coindesk goes so far as to write the whole thing off as a “mental health” issue.

Mushegian’s cryptic last tweet posted only a few hours before his death prompted speculation in crypto circles about the circumstances of his death and mental health.

Mental health issue, or something far more strange and disturbing?

Did this guy also have a “mental health crisis”?