The implosion of FTX is about much more than financial mismanagement or even fraud, despite what what we may have been told in an embarrassingly whitewashed account from the NYT—the same paper of record that did a puff piece on Ray Epps. Indeed, the FTX scandal is shaping up to be a money laundering scandal of historic proportions, offering a glimpse into how the Clinton “overworld” infrastructure moves money around in the digital age.

Recently a thread popped up concerning a mysterious figure in the whole saga by the name of Michael Kives. Kives is ultra-connected in the celebrity, technology, and financial world and yet has virtually no online footprint.

WHO IS MICHAEL KIVES?

Connected to SBF, The Clintons, Warren Buffet, Michael Lewis and even Elon…

AND NO WIKIPEDIA PAGE?

Take a look at the full thread for yourself.

Kives’ strange involvement in FTX includes the fact that he was one of the several people apparently trying to involve disgraced FTX founder Samuel Bankman-Fried in Elon’s Twitter purchase deal:

Bankman-Fried and Musk exchanged several messages through April. In one, Bankman-Fried shared a post about how blockchain and Twitter could work. In an April 14 text Michael Kives, the founder and CEO of K5 Global, texted Musk, saying: “It could be cool to do this with Sam Bankman-Fried.” Jared Birchall, a partner and top advisor to Musk, also sent Musk a Bloomberg article referencing Bankman-Fried and his vision for blockchain and social media integration.

Musk was later connected to Morgan Stanley banker Michael Grimes in April, who said that Bankman-Fried would be willing to “shake hands” on up to US$5 billion. “I do believe you will like him,” Grimes texted Musk. “Ultra genius and doer builder like your formula. Built FTX from scratch after MIT physics. Second to Bloomberg in donations to Biden campaign.”

However, Musk turned sour on the idea, saying he didn’t want to “have a laborious blockchain debate” with Bankman-Fried. “Blockchain Twitter isn’t possible, as the bandwidth and latency requirements cannot be supported by a peer-to-peer network, unless those ‘peers’ are absolutely gigantic, thus defeating the purpose of a decentralized network,” Musk told Grimes.

Despite Kives’ mysteriously meagre online footprint, there is one long-forgotten email on which he appeared CC’d that we’re sure he’d rather us forget. The email seems to confirm his role as a kind of fixer for Democrat machine. For context, former Congresswoman Tulsi Gabbard was famously disgusted by the corruption inside the DNC in the 2016 Primary and defied the Clinton machine by pledging her support for Bernie Sanders. This prompted a threatening e-mail from Darnell Strom and Kives, both Clinton operatives-cum-mega-connected talent agents. The message is simple: Tulsi, if you defy the Clinton machine, you’ll never work in this town again: 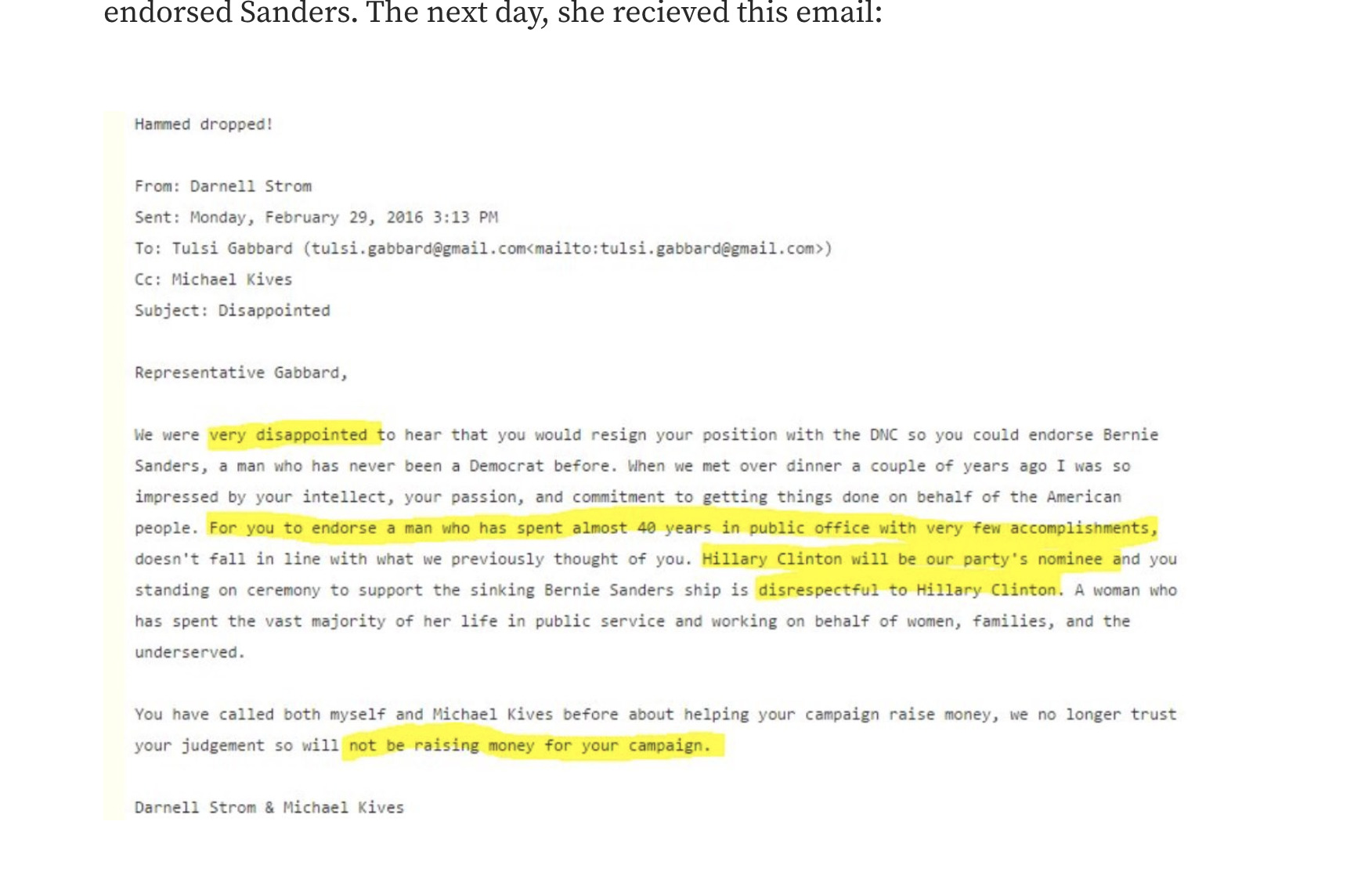 An ominous message to be sure, but as mysterious Hollywood handlers/political fixer threats go, it could have been worse:

Tucker Carlson discusses the threats allegedly sent to Kanye West by his trainer, Harley Pasternak: “The fact that no one’s investigating it tells you a lot.”

Read an in-depth thread about the mysterious Michael Kives.