A Grinch Is Trying to Steal Revolver News… Fight Back Here

Summary: The Grinch is trying to steal Revolver this Christmas. Fortunately, we are supported by many generous Subscribers and Donors, which helps us weather any cancel culture storm. You can now easily give the gift of a Revolver ad-free Subscription. Go to the Subscribe page and check the “gift” option. Don’t be a scrooge and make it an annual subscription. Buy one for yourself and for your friends and family, and anyone who can afford to give more, don’t hesitate to make a recurring monthly donation — whether it’s $1 or $1,000, every bit helps.

Twas the night before Christmas, when all through the house, not a creature was stirring… except for a deranged Soros-funded cancellation queen obsessed with taking Revolver News off of the internet!

That’s right, folks. It turns out there are people whose full time job it is to take sites like Revolver News off of the internet, and if that doesn’t work, they’ll settle with digging through our trash, sniffing our underwear, and harassing us in order to waste our time and give us a headache.

Among the pantheon of Soros-funded lackeys who perform this dirty toilet work (for which this particular subject seems congenitally suited), none stands out as much as a certain Nandini Jammi.

Nandini’s war against Revolver’s readers would be a hilarious case study in stalker-ish obsession if it weren’t so annoying.

Shortly after our launch over two years ago, Revolver collected over 200,000 emails from fans who wanted to receive our content in the mail. Nandini crawled straight out of the sewer and got to work, managing to get Revolver deplatformed from every single company that facilitates mass email sends (don’t worry, we’ve found a work-around).

In the mind of Nandini, it doesn’t matter that hundreds of thousands of Americans want to receive our content — even President Trump declared his support for Revolver News, and Revolver’s Darren Beattie has repeatedly appeared on Tucker Carlson Tonight to talk about the national security state’s war against Trump and his supporters.

Our people have all left Drudge. He is a confused MESS, has no clue what happened. Down 51%. @DRUDGE They like REVOLVER and others!

That is not allowed in contemporary America, apparently.

Wow! It sure looks like after he got kicked off @GoogleAds, Darren Beattie's Revolver(.)News moved onto @simpli_fi.

I don't know about you, but I would love to know how they allowed an outlet that promotes anti-vaxx conspiracies and publishes neo-Nazis into their inventory! pic.twitter.com/s6aJ8eNtgS

If a site like Revolver dares to embarrass the national security state with cutting edge reporting, such as our coverage of January 6, Nandini is sure to step in. There’s a reason George Soros hired Nandini — her aggressive efforts have earned her the appellation of Slumdog Commissar.

When Slumdog Commissar doesn’t get her way, she throws an online tantrum to intimidate advertisers into halting business with conservative websites:

Like they're really telling me that a giant picture I provided them with the name of the website isn't enough for them.

They need me to give them the URL and maybe cook their lunch for them and tuck them into bed at night too. pic.twitter.com/UDgJbr6kc6

This Steve Bannon interview with fellow white nationalist Darren Beattie is brought to you by @BMW @BMWUSA. BMW, check yo ads! pic.twitter.com/hbhKAeQGic

It’s an odd sort of personality that obsesses over depriving those she, or her boss Soros, do not agree with of their livelihoods. The idea of Revolver News having revenue and Revolver News readers having the truth is uniquely abhorrent to the Slumdog Commissar:

There’s a new level of anger & frustration coming from these guys lately.

Not to worry. While the Slumdog Commissar’s efforts have been annoying, they have not slowed us down in the least.

Nandini Jammi’s intimidation racket may well be coming to an end, as the company Spotify essentially told her to screw herself, with none other than noted Revolver News reader Elon Musk cheering on!

Multiple sources have reached out to me with one name: Kaz Nejatian, the COO of @Shopify, who keeps stepping in personally to protect Shopify accounts linked to terrorism & violence.

This is not a principled decision — it’s a political one. https://t.co/AqbiYu5tsk

Nandini Jammi’s boasts of having ruined Revolver News are complete nonsense. Revolver is majority-funded by you, the people, through ad-free subscriptions and donations, and thanks to Jammi’s threats and invective, Revolver experienced massive fundraising success from dedicated readers who want to fight back and send a message.

Who knew that George Soros’ chambermaid would turn out to be our very best fundraiser? 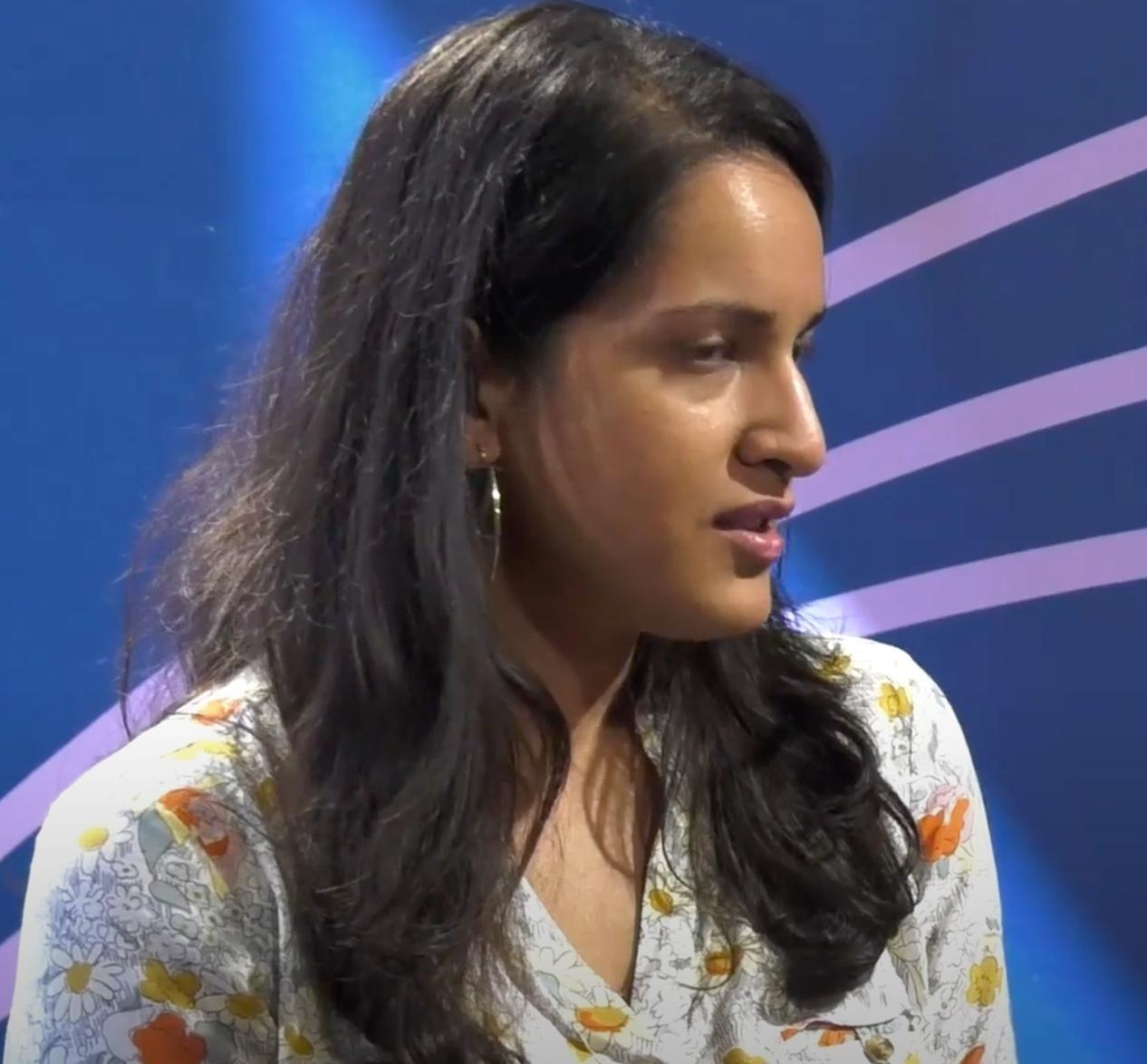 As most anyone working in media knows, ad-funded revenue models are largely a thing of the past. The New York Times itself was finally able to stem its financial bleeding through moving away from a digital advertising model to a digital subscription model.

The good news is that, like the New York Times, Revolver News isn’t going anywhere, and we aren’t planning on going broke anytime soon. That’s largely thanks to you, the reader. Besides ad revenues, we are supported by countless generous Subscribers and Donors, which keeps the Disinformation-Intelligence-Military-Industrial-Complex at bay.

This Christmas season, there’s an option to purchase a subscription to Revolver News as a gift to someone else. Simply click here to give the gift of an annual Revolver subscription to a friends or family member, then click check the “This is a gift” box. 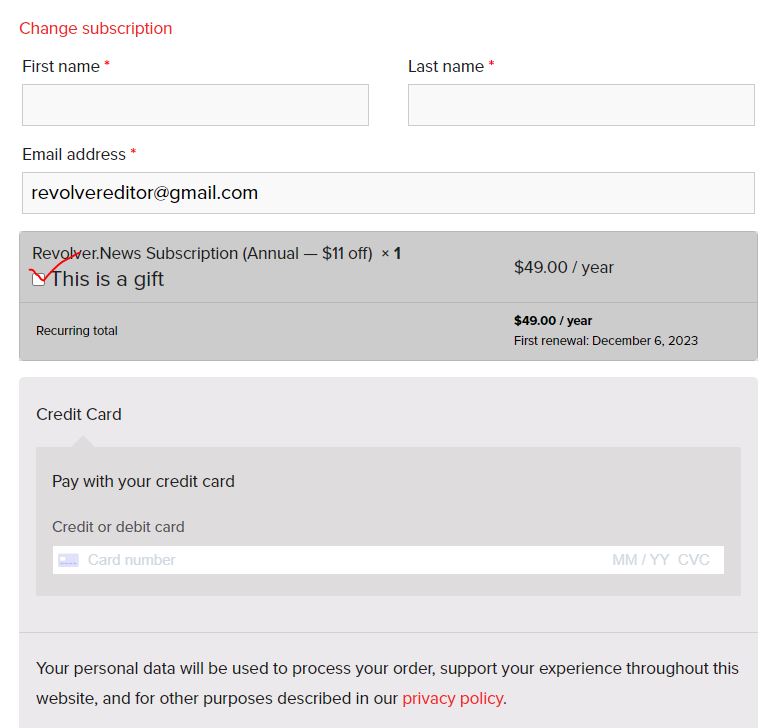 If you subscribe to the annual version of our ad-free subscription model, you will save $11 per year, and if you can afford more, please don’t hesitate to sign up for a recurring monthly donation. Whether you donate $1 or $1,000 every month, every bit helps fund our work to bring you the truth.