← Front page /
Revolver Exclusive: There’s a Sinister “Bush Connection” to Trump’s Recent DACA Remarks That You Need to Know About
July 12, 2020 (8mo ago) 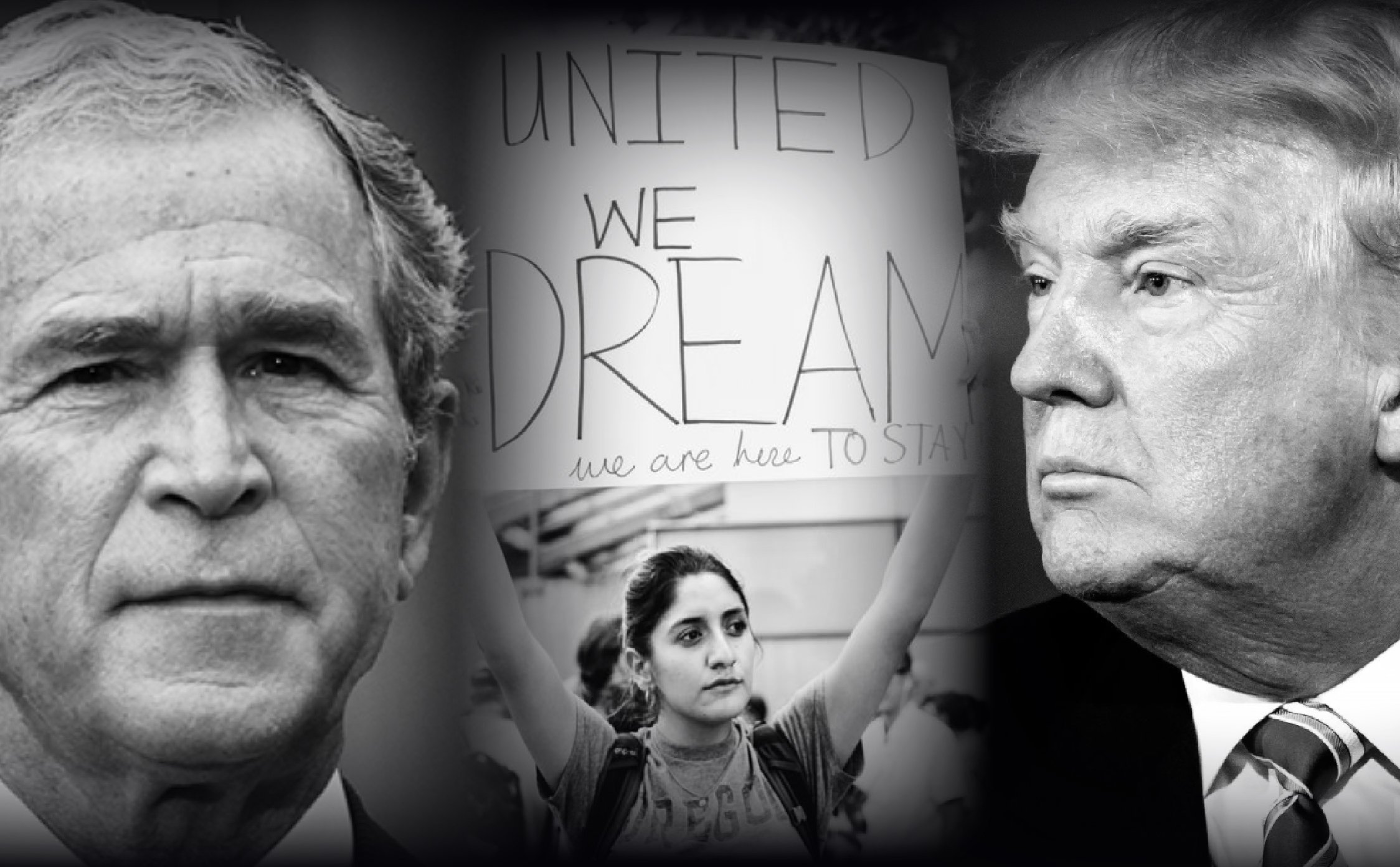 In an interview last Friday with Telemundo Anchor Jorge Diaz Balart, President Donald Trump expressed his intention to sign an executive order on immigration that would include a “path to citizenship,” also known as amnesty, for recipients of the Deferred Action for Childhood Arrivals program (DACA).

BREAKING: President Trump tells Telemundo’s @jdbalart he will sign an executive order on immigration that will include DACA in the coming weeks. #mtpdaily

Trump: “One of the aspects of the bill is going to be DACA. We are going to have a road to citizenship.” pic.twitter.com/M926cty8A1

These troubling statements arrived to the surprise and disappointment of many in the president’s base.

The president himself led with a strong position opposing amnesty and open borders during the 2016 campaign, and his instincts still lean in this direction.

According to one former White House official, “the President’s instincts and center of gravity are generally excellent and in tune with the American people. The problem is the last person who spoke with him, who can temporarily disrupt the gravitational pull of his good instincts. When you hear bizarre remarks that do not comport with the America First agenda, this is generally the story.”

One senior administration official commented on the President’s use of the language “pathway to citizenship,” noting that this is not a phrase that would occur naturally to the President in conversation, suggesting that the President had been briefed to promote amnesty prior to his Hispanic outreach video.

Another unusual issue is the notion that the president could establish such a “pathway to citizenship” via executive order, rather than through Congress. There have been rumors out of the White House for weeks that the President’s son-in-law Jared Kushner was promoting this approach.

A senior administration official suggested that a major contributing factor to the president’s language and executive order approach could have been a piece by Berkeley Law Professor and arch-neoconservative former George W. Bush official John Yoo.

Indeed, the senior official in question told Revolver.news that someone handed the president a recent piece by Yoo, and suggested to the president that Yoo’s piece justified the executive order approach to a DACA amnesty.

Yoo’s piece is almost a parody of the George W. Bush style neoconservatism that Trump defeated in 2016, with the title “How Trump Can Weaponize DACA decision and Cut Taxes.” Indeed, for a Bush-league conservative like John Yoo, tax cuts are the only issue that might remotely rival Middle East wars in importance.

The piece essentially argues that, in light of the recent supreme court decision Department of Homeland Security v. Regents of the University of California, the president has virtually no limits on discretionary executive authority. The piece goes on to argue that the president should use this authority to pass an enormous tax cut by simply declining to enforce tax laws.

According to Regents, presidents can now stop enforcing laws they dislike, hand out permits or benefits that run contrary to acts of Congress and prevent their successors from repealing their policies for several years. This gives Trump the opportunity to jump-start an economic recovery by declining to enforce the tax laws and economic regulations—shall we call it an economic deferred action program, EDAP? Just as Obama refused to enforce the immigration laws, Trump can decline to fully enforce the tax laws. [Newsweek]

Although the piece does note Yoo’s strong preference for DACA amnesty, the piece itself is not about promoting amnesty per se, and Yoo, to his credit, acknowledges the illegality of DACA, and is a strong critic of the Regent’s decision itself (though for executive authority reasons).

Still, the piece’s argument could be used to provide legal justification for the president’s authority to grant DACA amnesty via executive order. And our senior administration official source suggests that this was part of the discussion when Yoo’s article was brought to the president’s attention.

That Yoo would be promoted to the president as an authority is disturbing in its own right. Yoo, like the disgraced John Bolton, distinguished himself as one of the most ardent neoconservatives of the George W. Bush Administration.

Yoo’s claim to fame was the infamous “Torture Memos,” a series of legal memos providing support for waterboarding and other controversial interrogation measures. The memos generally take a very robust stand on the issue of executive authority. Although he was a strong critic of President Trump in the 2016 election, he, like many other Never Trumpers, was wise enough to suck up to the President after the election, nominally praising the President and attempting to sell the Never Trump neoconservative agenda packaged in new “MAGA” vocabulary.

Yoo even wrote an entire book defending Trump’s right to exercise robust executive authority, entitled “Defender in Chief: Donald Trump’s Fight for Executive Power.” Of course, with Bush neoconservatives like Yoo, there are always exceptions to the rule. While Yoo is perfectly fine defending extreme interrogation methods under his expansive view of executive authority, that authority evidently does not extend to such basic measures as protecting our borders with a Wall, claiming that the “president has no constitutional authority over border control.”

White House officials have told Revolver.news that John Yoo has been seen at the White House several times. A separate senior administration official commented that Yoo was “horrible” on immigration.

James Ho, it should be noted, was made a federal judge by none other than Donald Trump’s White House Counsel’s Office.

Moral of the story: Trump would do well to follow his America First instincts, and stop listening to old failed Bushies like Bolton, Karl Rove, and now John Yoo. Bush-era neoconservatives will only undermine his agenda and stab him in the back at the first available opportunity.

Revolver.news will have more on this developing story…