“Our people have all left Drudge ... They like REVOLVER and others!”
President Donald J. Trump
“...many of Drudge's long-time readers have fled to Revolver News...”
Tucker Carlson, FOX News
Close No thanks, I don't want breaking news emailed to me
He Almost Got Away With It: The Devious Chris Wallace “Two-Step” that Tried but Failed to Hand the Debate to Biden

← Front page / Exclusive
He Almost Got Away With It: The Devious Chris Wallace “Two-Step” that Tried but Failed to Hand the Debate to Biden
September 30, 2020 (2y ago) 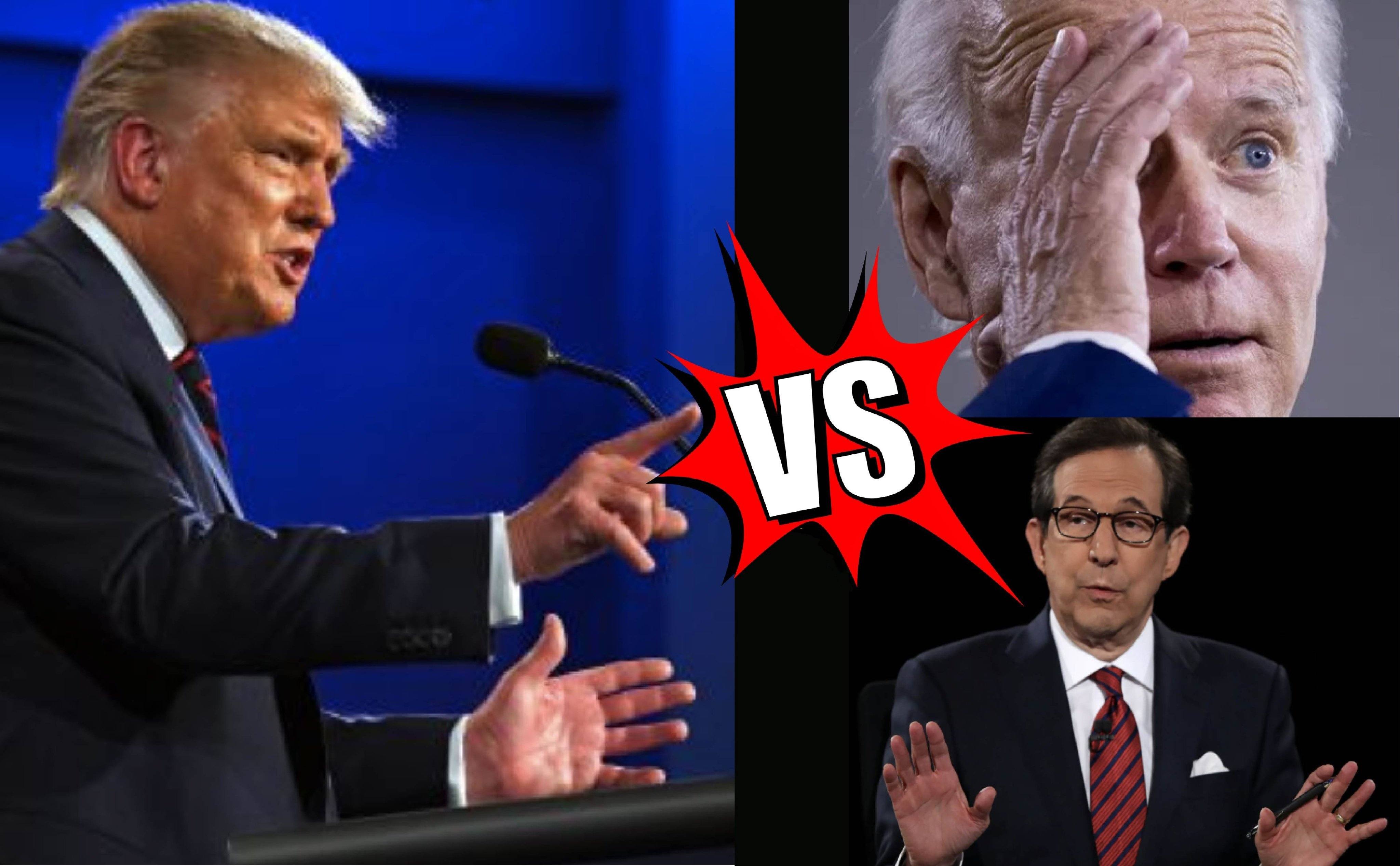 President Trump had an unprecedented debate challenge on Tuesday night: While the president had to debate alone, his opponent had the support of the moderator as well. In fact, Congressman Paul Gosar said it best: Joe Biden wasn’t even the president’s most formidable opponent in Cleveland:

President Trump seems to have realized it too:

Chris Wallace may work for Fox News most of the year, but on Tuesday night he worked a second job propping up Joe Biden’s presidential campaign, mostly by aggressively shutting down the discussion any time Biden seemed to be getting the worst of it. Whenever Trump began to get the better of Biden and force him into a corner, Wallace was prepared to step in, declare the topic over, and try pivoting to a new subject where the vice president might do better.

In short, the Wallace strategy was to step-in and interrupt when Trump was delivering blows to Biden, and to step-aside when Biden was running his rehearsed talking points against Trump.

Every time @realDonaldTrump lands a body blow, the moderator steps in and changes the subject. #Debates2020

"Frankly you've been doing more interrupting than he has."https://t.co/LzsYeJnakX pic.twitter.com/fwmvhOlYnc

A striking example of Wallace’s helpful interruptions came during the discussion of coronavirus, where as Trump ripped apart the case for continued mass national lockdowns, Wallace insisted it was time to move on:

Trump on Biden: "He wants to shut down this country and I want to keep it open…”

“Wait a minute, Joe. Let me shut you down for a second.”pic.twitter.com/5rKlWpsZXB

But Wallace didn’t simply interrupt. Wallace repeatedly worked to rig the debate with biased questions for both candidates.

Wallace’s intentions were clear early. One of his first questions to Joe Biden was among the most important of the entire election cycle: Does Biden agree with Democrats who want to pack the Supreme Court, abolish the filibuster, admit a raft of new states, and otherwise rig the national political scales to remove all checks on their power? Biden disgracefully refused to answer, on the ridiculous grounds that if he did, it might become a campaign issue:

"I'm not going to answer the question… Will you shut up?" Biden said when asked about court packing pic.twitter.com/i4RHShQAIP

A candidate flatly refusing to answer a central question of the campaign is the exact kind of situation where a moderator should be aggressive. They are there to get answers from the candidates. But instead, Wallace did nothing. He probed no further on the matter, and after a brief spat between Biden and the president, forced the debate on to another topic.

That was Wallace’s worst moment of the debate, but he was little better when the topic turned to America’s ruling class imposed “racial reckoning.” Wallace’s questions were repeatedly set up to tar the president as a so called “racist,” while ignoring the obvious reality that the left has ignited dozens of racially charged riots across the country.

First, Wallace suggested that the president’s recent ban on critical race theory, which teaches absurd doctrines about America being a racist country, white people being fundamentally racist, and more, was a total ban on all “sensitivity training.” When Trump started to accurately describe the anti-American nature of this race-baiting propaganda, Wallace repeated the deception.

And when Trump responds that it's radical, Wallace says, "What's radical about racial sensitivity training?" Insane.

Then, when the topic turned to riots, Wallace initially ignored the massive riots that have gutted huge swaths of Minneapolis, Chicago, and other cities, and instead invoked Charlottesville, a much smaller incident from three years ago. Wallace even spoonfed Biden the lie that Trump referred to white supremacists as “very fine people.” The president never did so, which is easily deduced by simply watching video from the time:

But it didn’t matter. Wallace repeated the lie to set up a favorable question for Biden.

Then, when Wallace finally decided to mention the riots ripping through American cities, riots almost exclusively instigated, perpetrated, and defended by the American left, he absurdly suggested it was right-wing groups “adding to the violence” in cities like Kenosha:

When moderator Chris Wallace asked, “Are you willing to condemn white supremacists and militia groups, and say that they need to stand down and not add to the violence in a number of these cities as we saw in Kenosha… https://t.co/mH0AMQ6DXV

And so it went, for ninety minutes. Wallace was happy to step-in and interrupt where it wasn’t necessary, but when Biden made absurd statements, such as antifa being an “idea” or nobody ever questioning the value of masks for combating coronavirus (in fact, Dr. Anthony Fauci himself did so, in March), instead of stepping-in, Wallace stepped aside.  When Biden contradicted his own campaign website by claiming he doesn’t support the Green New Deal, instead of holding him to account, Wallace helped Biden sustain his new narrative, and quickly moved on:

Oh, Wallace got that out of him?

By the end, Wallace was sharing jokes with with his co-debater, joking that just like Biden, he couldn’t understand what President Trump was saying:

Chris Wallace to Joe Biden: I’ve had a little trouble understanding him myself teehee

It was a sad display, but not a surprising one. Much like Tuesday night’s punching bag Hunter Biden, Wallace owes his career to his father, a legitimately impressive journalist, as well as his stepfather, the president of CBS News. Unlike Hunter Biden, Wallace isn’t handed millions of dollars by foreign oligarchs, so he apparently has to settle for trying to hand a debate to the Democratic candidate.

Despite all the effort thrown against him, though, it’s clear that the fake media in Washington know in their bones that Donald Trump won the debate. The proof of that is in their reaction. Literally from the moment the debate ended, talking heads on the major cable networks began pushing the idea that the next two debates should be canceled.

CANCEL THE REMAINING PRESIDENTIAL DEBATES. It is impossible to have an orderly, productive exchange with Donald Trump. Stop pretending otherwise. #Debate2020

Yes. Cancel them. The debates are now a danger to public safety and a direct threat to Black life. Cancel the debates. https://t.co/e2OUyjW4Na

Is there the slightest chance that the left’s elite class would be pushing this line if they felt the first debate boosted Biden’s odds? Of course not.

Still, Biden’s campaign staff is smarter than most Democrats, and they will know that trying to back out of debates will be seen as an admission of crushing defeat. So more debates are almost certain, and the incredible thing is that as bad as Wallace was, he will likely be the friendliest moderator Trump faces. Nothing immediate can done at this point to fixed a terminally biased press, though. The President can only prepare—and he must prepare as though he will have to debate not only Joe Biden, but the moderator(s) as well. It is a frustrating but fitting reality—after all, a drooling never-has-been like Biden wouldn’t be where he is unless he was propped up by the biased media in the first place. And in the end Trump’s greatest gift to America may well not even be defeating Hillary in 2016, or Biden in 2020—but in overcoming, exposing, and discrediting the enemies of the American people, the fake news media, that make evils like Hillary and embarrassments like Biden possible.