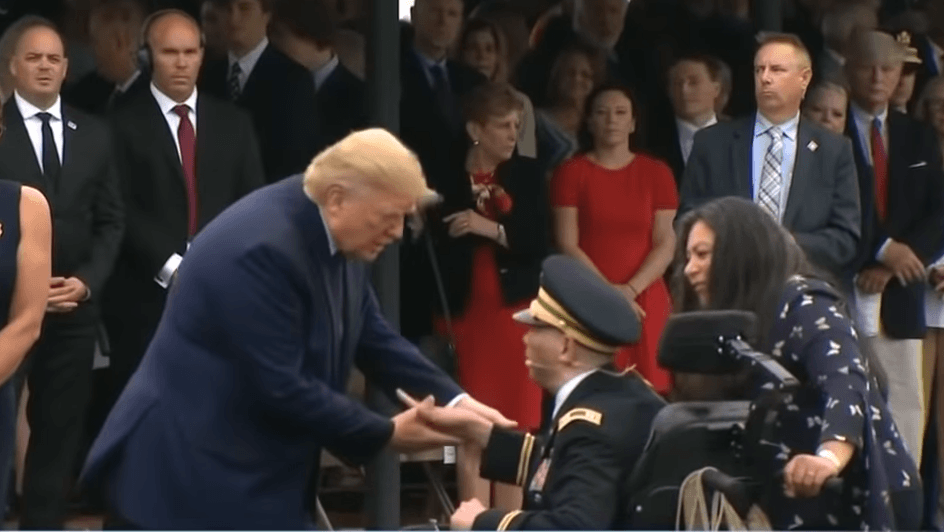 For the past two days, the press and the entire political establishment have crawled out of the fetid swamp to launch one of their most deranged attacks yet on President Trump. They’ve accused him of the grave offense of ridiculing America’s fallen soldiers. This attack has only one goal. They do not want you, dear reader, to actually think deeply about who has really used and abused American’s bravest soldiers. The answer, unambiguously, is our utterly failed ruling class. America’s corrupt ruling class has recklessly sacrificed the precious blood of our brave warriors not for the betterment of America, but for the enrichment of Washington.

The claim, as reported by Jeffrey Goldberg in The Atlantic, is this:

When President Donald Trump canceled a visit to the Aisne-Marne American Cemetery near Paris in 2018, he blamed rain for the last-minute decision, saying that “the helicopter couldn’t fly” and that the Secret Service wouldn’t drive him there. Neither claim was true.

Trump rejected the idea of the visit because he feared his hair would become disheveled in the rain, and because he did not believe it important to honor American war dead, according to four people with firsthand knowledge of the discussion that day. In a conversation with senior staff members on the morning of the scheduled visit, Trump said, “Why should I go to that cemetery? It’s filled with losers.” In a separate conversation on the same trip, Trump referred to the more than 1,800 marines who lost their lives at Belleau Wood as “suckers” for getting killed.

On Memorial Day 2017, Trump visited Arlington National Cemetery, a short drive from the White House. He was accompanied on this visit by John Kelly, who was then the secretary of homeland security, and who would, a short time later, be named the White House chief of staff. The two men were set to visit Section 60, the 14-acre area of the cemetery that is the burial ground for those killed in America’s most recent wars. Kelly’s son Robert is buried in Section 60. A first lieutenant in the Marine Corps, Robert Kelly was killed in 2010 in Afghanistan. He was 29. Trump was meant, on this visit, to join John Kelly in paying respects at his son’s grave, and to comfort the families of other fallen service members. But according to sources with knowledge of this visit, Trump, while standing by Robert Kelly’s grave, turned directly to his father and said, “I don’t get it. What was in it for them?” [The Atlantic]

There is, of course, no evidence that this ever happened. Goldberg cites only unnamed sources who have refused to go on the record. Plenty of on-the-record people deny it. Even Donald Trump’s mortal enemy, John Bolton, denied the charge.

John Bolton Rejects Atlantic Story: 'I Was There'; 'I Didn't Hear That' https://t.co/1QO4NwaPGd

Jeffrey Goldberg, who wants to tar Donald Trump as hostile to the troops, has far more of a claim to be the mortal enemy of the American people. As a major neocon propagandist, Goldberg pushed false claims and false narratives to drag the United States into the disastrous War in Iraq. In 2002, Goldberg published an award-winning article pushing the false narrative that Saddam Hussein was in kahoots with Al Qaeda. In another article, he furthered the false idea that Hezbollah and Saddam Hussein might be aligned, and Hezbollah would act as an Iraqi proxy in the event of war. Hezbollah, as a Shiite militia backed by Iran, actually hated Saddam.

Goldberg was one of the Iraq war’s chief cheerleaders and enablers. Today, it’s obvious that war was a tragic waste. Thousands of our bravest, most patriotic Americans were killed or horrifically maimed. To ask what those soldiers died for is not mockery. It is an essential question, one whose answer should fill all Americans with overwhelming rage against the corrupt, permanent ruling class.

Goldberg also accuses Trump of not wanting veteran amputees to participate in his 4th of July military parade. Aside from the fact that this is almost assuredly vicious calumny, a far more worthy question would be why America has so many veteran amputees (almost 1,700 from Iraq and Afghanistan combined). The answer, of course, is people like Jeffrey Goldberg: Leaders who through vanity, stupidity, and dishonesty drove America into far-off wars that didn’t serve the country’s interests, and then perpetuated them for years with no plan for actual victory.

Trump is fighting to conserve American blood and treasure, while Goldberg and his allies are fighting to throw more of it down the drain in pointless and endless foreign wars. At his perch as chief propagandist at The Atlantic, Goldberg has done nothing but agitate for more endless wars. In 2016, Goldberg helped ignite the Russia hoax, calling Trump a Putin puppet because he didn’t see why U.S. troops should act as human shields for European states that are unwilling to defend themselves. In 2019, Goldberg profiled former Defense Secretary James Mattis in a piece meant to shame Trump for trying to bring U.S. troops home from Syria.

Just this past year the ruling class whose interests Goldberg so assiduously represents pushed a dubious intelligence leak to try to undermine America’s withdrawal from Afghanistan, a withdrawal that arguably should have happened 18 years ago.

The D.C. swamp doesn’t want you thinking about the blood and treasure wasted on these ruinous conflicts. They don’t want you to think about the billions of dollars they have siphoned off of the massive defense contracts necessary to fund these endless foreign conflicts. And they most assuredly don’t want you to think about the countless brave patriots ripped away prematurely from their families and communities. Instead, they’re desperate to distract Americans with ridiculous claims about what the President supposedly said two years ago. The American people will not fall for their dirty tricks in November.