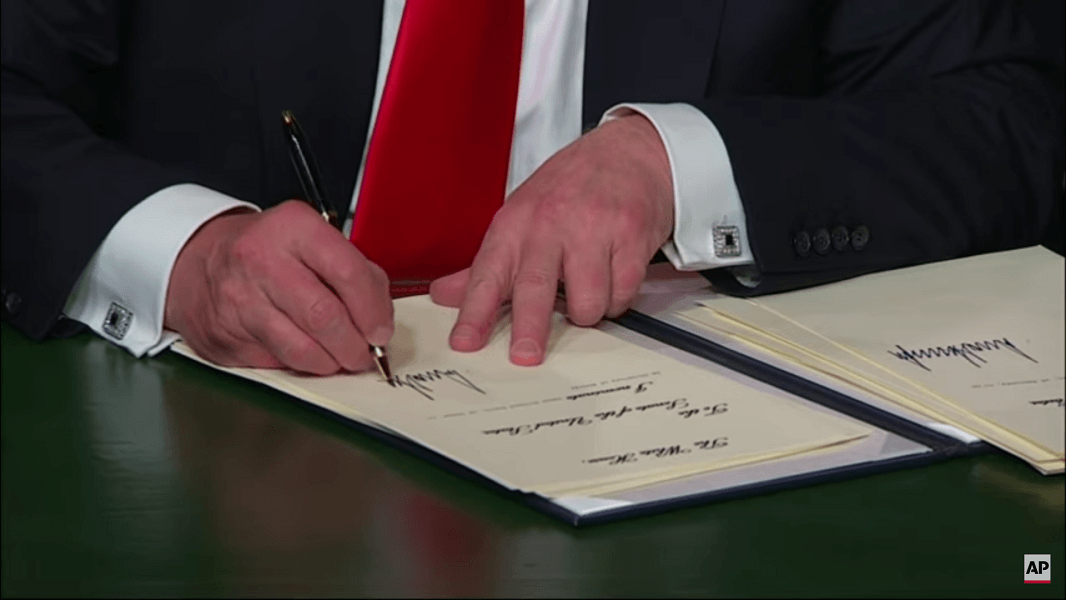 This is a Guest Post. Guest Posts do not necessarily represent the official editorial position of Revolver News.

Recently, President Trump issued a directive requiring the federal government to stop employee training based on “critical race theory.” While this is a good measure, the president can do much more through executive action to prevent the kinds of race-based policies that are harming our economy, contributing to racial tensions and tearing this country apart. By doing so, he can remove the incentives that ultimately lead to these kinds of trainings that exist throughout the private and public sectors.

In 1961, President Kennedy issued the first Executive Order to use the phrase “affirmative action,” requiring the federal government to take positive steps to ensure non-discrimination in hiring. This view of civil rights was greatly expanded in 1965, when President Johnson signed EO 11,246, which mandated affirmative action for any company that did at least $10,000 in business with the federal government.

Two things made this executive order particularly expansive. First, it applied to not only the work a company did for the federal government, but to its entire business. Second, the affirmative action requirement applies to their subcontractors too. Because of executive orders, affirmative action came to be required at most major businesses, as the government has come to play a larger role in our economic life.

From then on, exactly what “affirmative action” has meant has mostly been determined by the civil rights bureaucracy and courts, with little democratic input. In 1971, the Contractors Association of Eastern Pennsylvania sued the Nixon administration over its affirmative action requirements. The Third Circuit rejected the claim that it violated the Civil Rights Act. Bureaucrats and judges began to use the “disparate impact” standard, which said that a practice could violate the law based on statistical reasoning alone even without an explicit intent to discriminate. Utilization analysis allows one to infer discrimination based on the number of people of a certain race or sex working in a job relative to the labor pool, as defined by bureaucrats and courts, of course.

Diversity training is a direct consequence of affirmative action requirements. Under current law, a company can discriminate even with the best intentions; this required full-time human resource staffs to ensure that they comply with laws that are ultimately vague, in a world in which statistical disparities exist everywhere and enforcement is therefore arbitrary. Even if diversity training does no good, at the very least its existence can be taken as evidence that a corporation is making an effort.

In this environment, which company will paint a target on its back by appearing to do less than its competitors to stamp out discrimination, whether conscious or not? Today, according to one Harvard Business Review estimate virtually all Fortune 500 companies offer diversity training to their employees. Once such programs start, it is not enough to simply have such a program. As the media, judges, and bureaucrats expand the definitions of terms like “racism” and “discrimination,” risk-averse businesses that want to avoid lawsuits and federal government scrutiny move with the tide, and this leads to programs that denounce virtually all white people and the American system.

Fortunately, while the courts have played a large role in the development of civil rights law, what was created by executive order can largely be outdone by the same method. In 1986, the Reagan administration sought to weaken the affirmative action requirements in EO 11,246, but was prevented from doing so by congressional resistance. Today, President Trump has no such reason to fear taking action, given that his party controls the Senate and would be behind him on this issue.

The Trump administration has done the right thing by siding with victims of race-based discrimination in college admissions. It is time it did the same throughout the federal government and private sector.

While eliminating critical race theory in government training is an important step, the president’s power to undo some of the harmful racial policies of the last several decades is more expansive than most people realize. In order to achieve equal treatment under the law, the president can, in addition to appointing judges that follow the constitution as written, undo the mistakes of past administrations with a stroke of the pen.

EO 11,246 should be modified to do away with affirmative action in the federal government and among government contractors, by defining discrimination as intentional differential treatment based on protected class status. With the president in a tough reelection bid and polls showing overwhelming opposition to affirmative action, such a move would likely be good politics in addition to undoing the undemocratic shift over the last several decades towards state-sponsored discrimination.