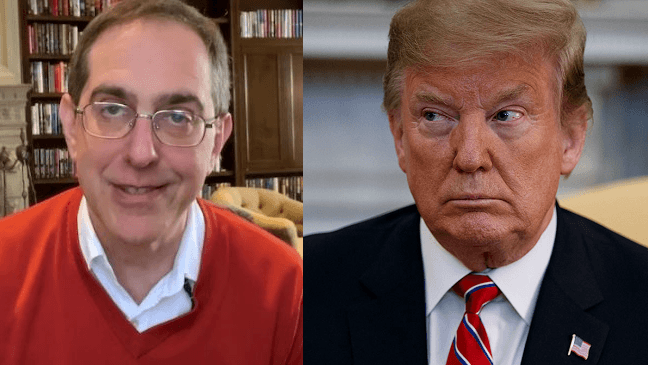 On the left is Christopher L. Eisgruber, President of Princeton.

Credit to the Trump administration: At least one of its lawyers knows how to troll.

The Education Department just informed Princeton that it's under formal investigation following the president's declaration that racism is "embedded" in the university. If true, that would violate the Civil Rights Act, rendering it ineligible for federal $.https://t.co/CIJS0fDzXE

The administration’s recently-announced investigation into Princeton University shouldn’t stop at trolling. President Trump would be wise to use this investigation as an opening salvo in a much wider attack on America’s corrupt, dishonest university establishment.

On Thursday, the Department of Education notified Princeton University that it has opened an investigation into whether the school is practicing racial discrimination in violation of Title VI of the 1964 Civil Rights Act. Title VI states that “no person in the United States shall, on the ground of race, color, or national origin, be excluded from participation in, be denied the benefits of, or be subjected to discrimination under any program or activity receiving Federal financial assistance.”

“Racism and the damage it does to people of color…persist at Princeton as in our society, sometimes by conscious intention,” Eisgruber wrote. “Racist assumptions from the past also remain embedded in structures of the University itself.”

Eisgruber suggested the school could fix the problem with a new diverse hiring initiative, and also by opening an extension school for non-traditional students, like those already in existence at Harvard, Columbia, and other Ivy League schools. In other words, conveniently, the best fix for Princeton’s “racism” is to open a new school that can extract tuition dollars from even more people!

Eisgruber’s letter was, of course, meant to be fake. A bland admission of sin by the university, followed by no serious changes, except, of course, spending some of the university’s vast endowment to hire new faculty based on skin color, with the cost offset by enrolling even more students at high cost. It was a ritualistic paean to Black Lives Matter’s moral totalitarianism, of the sort we have already seen from almost every university, non-profit, corporation, and government agency in the past four months.

But the Trump administration, brilliantly, decided to take Princeton at its word. If Princeton is an openly-racist institution, they asked, why is it getting millions of taxpayer dollars ever year?

Based on its admitted racism, the U.S. Department of Education (“Department”) is concerned Princeton’s nondiscrimination and equal opportunity assurances in its Program Participation Agreements from at least 2013 to the present may have been false … The Department is further concerned Princeton perhaps knew, or should have known, these assurances were false at the time they were made. Finally, the Department is further concerned Princeton’s many nondiscrimination and equal opportunity claims to students, parents, and consumers in the market for education certificates may have been false, misleading, and actionable substantial misrepresentations in violation of 20 U.S.C. § 1094(c)(3)(B) and 34 CFR 668.71(c). Therefore, the Department’s Office of Postsecondary Education, in consultation with the Department’s Office of the General Counsel, is opening this investigation. [Washington Examiner]

Princeton … stands by its representations to the Department and the public that it complies with all laws and regulations governing equal opportunity, non-discrimination and harassment. This work is core to the University’s teaching and research mission, and we are vigilant in our pursuit of equity in every aspect of our programs and operations.

It is unfortunate that the Department appears to believe that grappling honestly with the nation’s history and the current effects of systemic racism runs afoul of existing law. The University disagrees and looks forward to furthering our educational mission by explaining why our statements and actions are consistent not only with the law, but also with the highest ideals and aspirations of this country. [Princeton]

So, two weeks ago, Princeton said the school was often, “by conscious intention,” racist. Now that it might face the slightest consequence from the federal government, though, the school says it complies with all federal non-discrimination laws.

To the average American, and according to the Civil Rights Act, “racism” has a relatively clear meaning: Treating people differently on the basis of race. Besides being the older definition, this definition also has the advantage of being easier to define, and combat with the legal system: If a school racially discriminates against Asians in admissions, or a restaurant serves only white people, or an apartment refuses to rent to blacks, then these practices can be legally restricted, and the problem fixed.

In the modern, critical race theory version of racism, though, racism is mystical in nature. It is essentially a spiritual force that inhabits all institutions. It also colors all interactions between white and non-white persons. In the new definition of racism, all white people are racist, and only white people can be racist. This form of racism can be “confronted,” or have a “reckoning,” but it can never be fixed.

Universities prefer the second definition because, under the old definition, elite universities are among the most flagrantly racist institutions in American life. In both their faculty hiring, and in their student admissions, schools discriminate based on skin color to keep down the number of white Americans, and also Asian-Americans. Under any honest reading of the Civil Rights Act (not to mention the 14th Amendment), this federally-subsidized discrimination is illegal. And  yet the law has never been enforced, because conservatives have been too cowardly to insist upon enforcing it.

Fortunately, America’s core civil rights laws were written before this insane new definition was invented. It’s time for those laws to be enforced as they were actually written. The Trump administration should open investigations at every elite university, identify the obvious racial discrimination taking place, and cut off taxpayer funds until it is eliminated. It’s entirely possible that the schools will choose to do without federal funding to preserve their discriminatory policies. If so, that’s fine. American taxpayers shouldn’t be subsidizing preposterously wealthy private schools in the first place.

From “critical race theory” to “white privilege” to “systemic racism,” every single poisonous idea that ultimately trickles down to journalists and policy makers is originally concocted by some professor at a University. The American academy is truly the incubator of the cultural poison that has been responsible for rotting out the core foundations of our body politic, eating away at our social fabric, our freedoms, and the preconditions for the formation of healthy, happy families. The universities have been captured and weaponized against the American people, charging exorbitant prices to well-meaning parents for the privilege of indoctrinating their own children against them. It is imperative that the emerging elite recapture every single corrupt institution currently mismanaged by our corrupt ruling class—the universities chief among them. This recent move by President Trump against Princeton is an encouraging first step on the difficult journey of taking back our country for good.