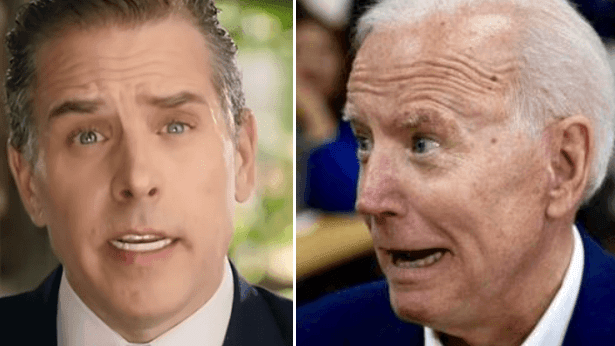 The Hunter Biden Ukraine bombshell from the New York Post suggested that Joe Biden is just another corrupt politician. The Biden campaign’s weak and tepid denial of Hunter and Joe’s pay-to-play corruption all but confirmed it.

The Post story included a screenshot of what the paper said was a 2015 email from Burisma adviser Vadym Pozharskyi to Hunter Biden, thanking him for “the opportunity to meet your father.” But the email doesn’t indicate whether Pozharskyi was describing a meeting that had already occurred or one intended to occur in the future. Nevertheless, the Post reported that the existence of such a meeting undercut Biden’s long-held assertions that he had no involvement with his son’s business dealings.

Biden’s campaign would not rule out the possibility that the former VP had some kind of informal interaction with Pozharskyi, which wouldn’t appear on Biden’s official schedule. But they said any encounter would have been cursory. Pozharskyi did not respond to a request for comment. [Politico]

You read that correctly. Joe Biden could not even deny that he met with a corrupt Ukrainian oligarch. And all so that Hunter could get a bigger payday, according to the Post.

Hunter Biden discussed leveraging his connection to his father in a bid to boost his pay from a Ukrainian natural gas company, according to an email he sent around the time he joined the firm’s corporate board.

In a lengthy memo to his then-business partner, Devon Archer, who already sat on the Burisma board, Biden repeatedly mentioned “my guy” while apparently referring to then-Vice President Joe Biden.

Hunter Biden wrote to Archer, “We need to ask for long term agreement and across the board participation. This is a huge step for us that could easily become very complicated. And if we are not protected financially regardless of the outcome we could find ourselves frozen out of a lot of current and future opportunities.

“The contract should begin now- not after the upcoming visit of my guy.

“That should include a retainer in the range of 25k p/m w/ additional fees where appropriate for more in depth work to go to BSF for our protection. Complete separate from our respective deals re board participation.”

It’s unclear if Hunter Biden or Archer got any of the $25,000 a month ­mentioned.

Hunter Biden was reportedly paid as much as $50,000 a month by Burisma before his lawyer has said he “stepped off” the board in April 2019.

The email to Archer contained 22 bullet points and bore the subject line “Tmrw.”

Following the bullet points, Hunter Biden wrote, “This could be the break we have been waiting for if they really are smart enough to understand our long term value. If they are looking to just use us until the storm passes then we risked far too much for far too little.

“Finally, we need to have a plan on how we develop a corporate entity or LLP that allows us to draw on funds generated here to free us from existing (under-producing current commitments) and to build our own investment and expansion strategy. Maintaining the status quo is not an option,” he added.

“We can preserve our interest in the areas where minimal involvement is appropriate but should not get greedy and try to keep all the balls in the air that exist today.” [New York Post]

So, to recap. Hunter used a meeting with his Dad to secure a payday, and told his business partner to buy a burner phone so they could discuss setting up a corporate entity where they could collect the loot.

Among other things, this completely undermines the “disinformation” pretext that Twitter, Facebook, and other major tech firms have used to completely censor the story.

The New York Post’s reporting does massive damage to a key claim of the Biden campaign. Biden has repeatedly claimed that, despite his son’s obviously corrupt arrangement with the Ukrainian energy company Burisma, he never discussed business with his son and never let it influence his public policymaking as vice president. The Post’s sleuthing suggests this was a lie:

Hunter Biden introduced his father, then-Vice President Joe Biden, to a top executive at a Ukrainian energy firm less than a year before the elder Biden pressured government officials in Ukraine into firing a prosecutor who was investigating the company, according to emails obtained by The Post.

The never-before-revealed meeting is mentioned in a message of appreciation that Vadym Pozharskyi, an adviser to the board of Burisma, allegedly sent Hunter Biden on April 17, 2015, about a year after Hunter joined the Burisma board at a reported salary of up to $50,000 a month.

“Dear Hunter, thank you for inviting me to DC and giving an opportunity to meet your father and spent [sic] some time together. It’s realty [sic] an honor and pleasure,” the email reads.

An earlier email from May 2014 also shows Pozharskyi, reportedly Burisma’s No. 3 exec, asking Hunter for “advice on how you could use your influence” on the company’s behalf. [New York Post]

Powerful forces in America have staked everything on Biden becoming president, and they decided the Post’s story was a threat. So on Wednesday afternoon, Big Tech and the MSM suppressed it more aggressively than any other political story in living memory.

This may be the most aggressively censored political bombshell in recent American history.

Facebook announced that, without waiting for the story to be fact-checked, it would block distribution of the story on its platform.

While I will intentionally not link to the New York Post, I want be clear that this story is eligible to be fact checked by Facebook's third-party fact checking partners. In the meantime, we are reducing its distribution on our platform.

The excuse for the suppression is, to use a technical term, bulls***. Over the past four years, outlets like The New York Times and The Washington Post have published countless stories, particularly on the Russia hoax, that proved to be completely untrue, and built entirely on politically-motivated leaks. None of those stories were ever suppressed, for the obvious reason that they didn’t imperil a Democratic presidential campaign.

Soon, Twitter joined in. Just for starters, the company deleted the New York Post‘s original tweet of its story.

Twitter deleted @nypost’s tweet about the Hunter Biden bombshell. This is election interference. We’ve entered the age where we have a "ministry of truth" run by Democrats and only they decide what’s true. They demand that you no longer believe your lying eyes & ears.

But the company didn’t stop there. They prohibited anybody else from sharing the link, even if they expressed skepticism of its contents. And then, for good measure, they banned sharing the link in private direct messages:

Before choosing to block the links entirely, Twitter began sending users to a warning screen if they tried to go read the story themselves: 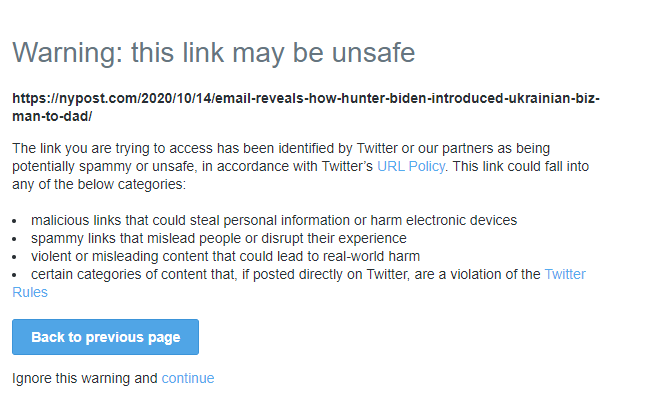 The Post’s primary Twitter account was locked as of 2:20 p.m. Wednesday because its articles about the messages obtained from Biden’s laptop broke the social network’s rules against “distribution of hacked material,” according to an email The Post received from Twitter. [NY Post]

Clearly, big tech, the establishment press, and the DNC are colluding to decide which stories the public is allowed to even think about.

The vast majority of people don’t follow every new Twitter controversy, and even most conservatives don’t frequently check right-leaning news outlets. They get their news through Facebook or by glancing at major, “mainstream” outlets. And as far as these outlets are concerned, the entire Hunter Biden story, and resulting censorship dispute, does not exist. The Washington Post’s front page carries not a single mention of it: 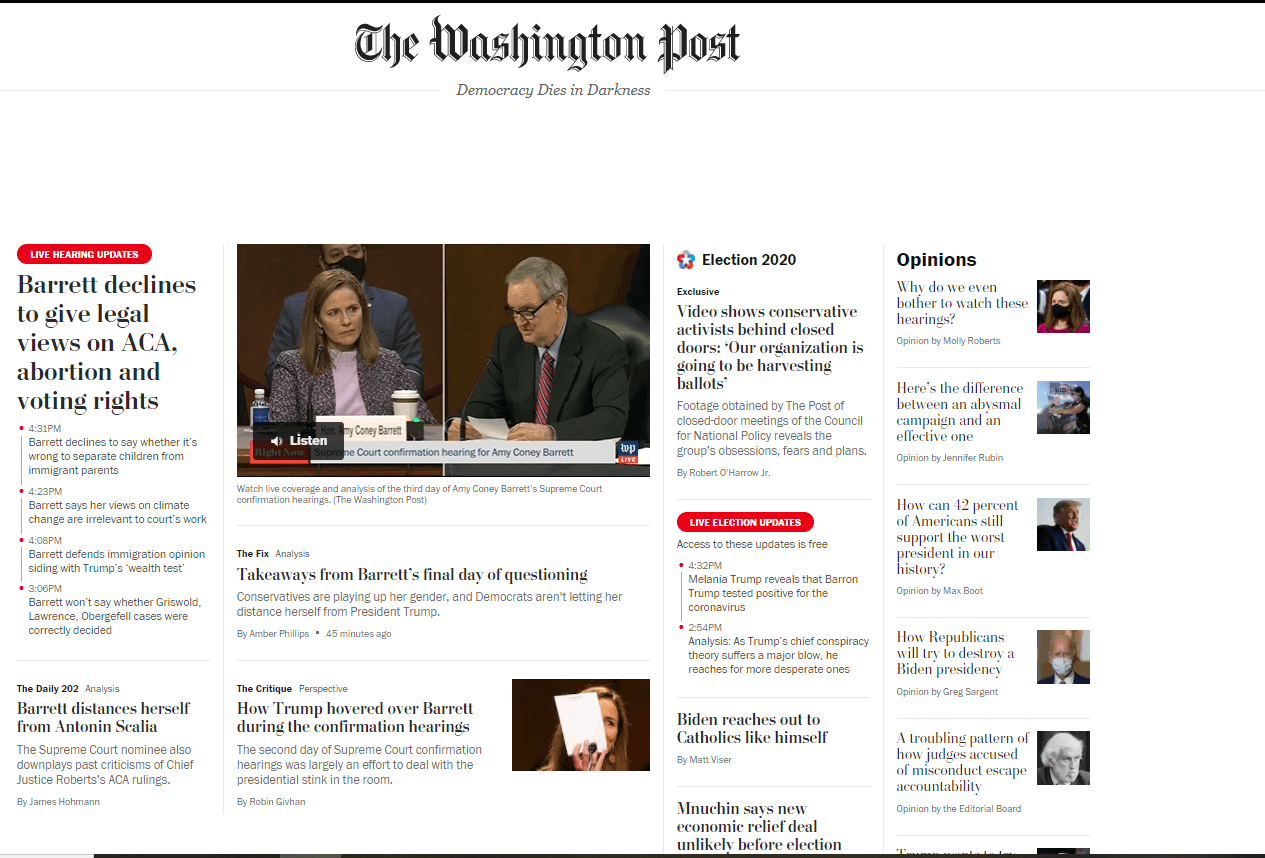 Neither does The Wall Street Journal:

CNN, The New York Times, and almost every other major outlet steadfastly refused to even mention Big Tech’s censorship effort, let alone the contents of the story itself.  One of the only notable publications to write about the censorship was Buzzfeed, which published the completely bogus Trump dossier almost four years ago. Politico’s initial reaction was to briefly mention the Biden campaign’s response to the story, without even mentioning Hunter Biden’s name:

JOE BIDEN SPOKESMAN ANDREW BATES hits back at the N.Y. POST STORY, via NATASHA BERTRAND and KYLE CHENEY: “Investigations by the press, during impeachment, and even by two Republican-led Senate committees whose work was decried as ‘not legitimate’ and political by a GOP colleague have all reached the same conclusion: that Joe Biden carried out official U.S. policy toward Ukraine and engaged in no wrongdoing. Trump Administration officials have attested to these facts under oath.

“The New York Post never asked the Biden campaign about the critical elements of this story. They certainly never raised that Rudy Giuliani – whose discredited conspiracy theories and alliance with figures connected to Russian intelligence have been widely reported – claimed to have such materials. Moreover, we have reviewed Joe Biden’s official schedules from the time and no meeting, as alleged by the New York Post, ever took place.” [Politico]

Thanks to its domination of all the supposedly “neutral” institutions in American life, the left can mold the public’s perception of reality . The public can’t reach its own conclusions about a story they are prevented from even reading.

In the particular case of this New York Post piece, the Big Tech Commissars actually played their hand poorly. Their heavy-handed attempt at censorship did nothing to cover up the Post story — it actually amplified it an order of magnitude. It also revealed the nakedly biased nature of these tech companies for tens of millions of Americans to see. This one egregious action may have turned up the heat to a degree that the frogs will jump out of the proverbial slow boiling pot — and the frogs are by now very angry.

While we must be sober about the uphill battle ahead of us, the globalists are not the invincible force they would like us to think they are. The future does not belong to our corrupt ruling class quite yet. It is still very much up for grabs for a smart, bold, fearless, emerging elite of patriots willing to seize it.