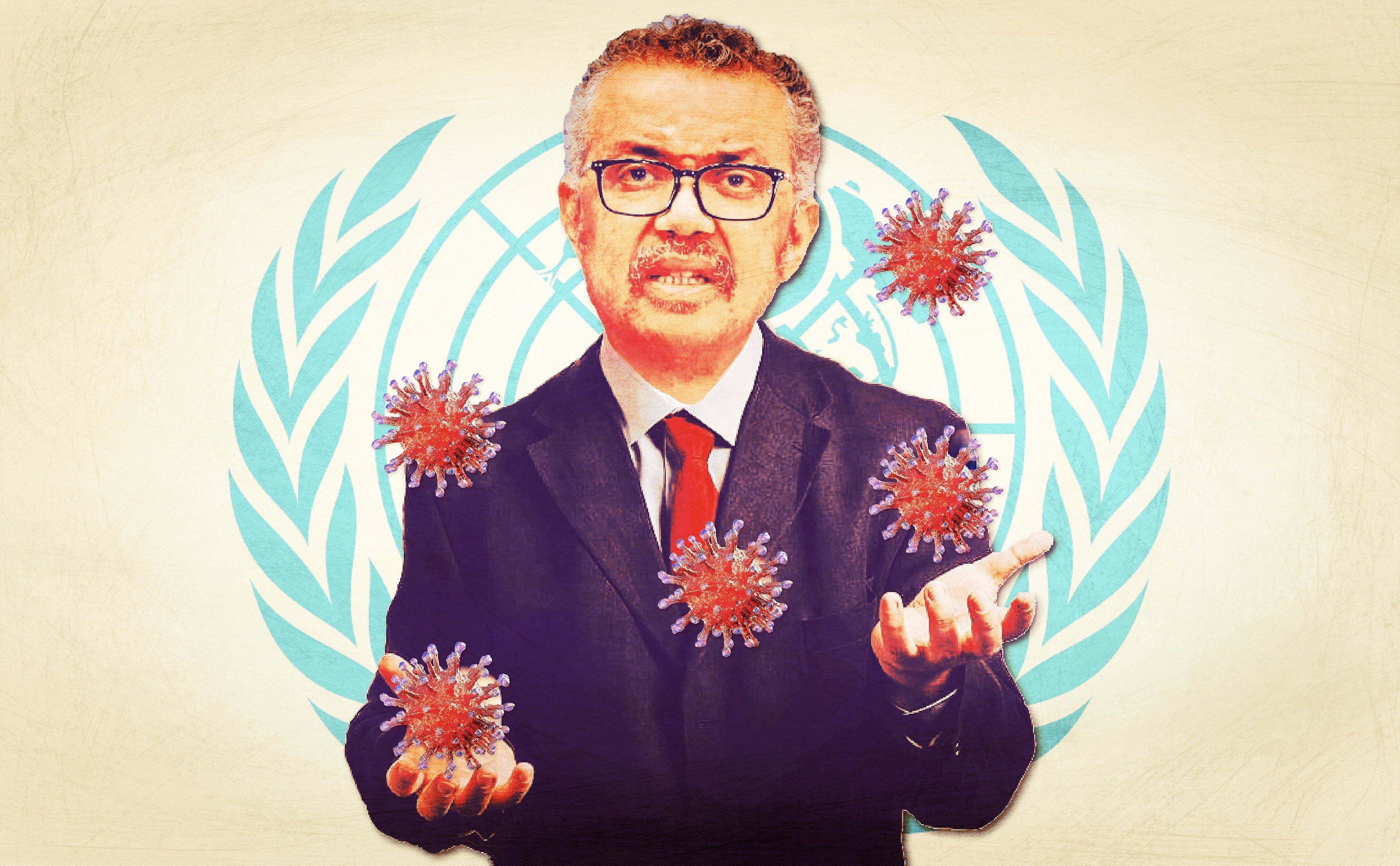 The world’s most prominent medical organization is turning its back on coronavirus lockdown insanity. Instead of embracing this new “science,” all the powers that be in America are ignoring the development. This says a lot about the cowardice and uselessness of America’s media, but it also says a lot about the role of our so-called “experts.” The true function of  “experts” is not to provide genuine advice to good-faith decision makers, but to serve as collective rubber stamps for the agendas set forth by our corrupt ruling class.

Three years ago, Dr. David Nabarro was a top candidate for the director-generalship of the World Health Organization. Nabarro lost that election to Tedros Adhanom, perhaps because he hadn’t distinguished himself enough at covering up cholera outbreaks.

Now, Nabarro is one of the WHO’s chief global envoys for combating the coronavirus. And in an interview last week with The Spectator, a British magazine, Nabarro made a confession: Mass lockdowns to fight coronavirus are terrible policy.

Nabarro’s confession was obvious to anybody who has honestly followed the science and data over the past seven months. As Revolver reported weeks ago, in the U.S. lockdowns will likely destroy ten times as many life-years as they save.

Nabarro and WHO deserve only minimal credit, though, for finally arriving at the correct position on lockdowns after half a year of unprecedented imbecility. Back in April, when it mattered, the WHO sounded an hysterical alarm against lifting lockdowns:

Lifting coronavirus lockdown measures too early could spark a “deadly resurgence” in infections, the World Health Organization chief has warned.

Dr Tedros Adhanom Ghebreyesus said countries should be cautious about easing restrictions, even as some struggle with the economic impact.

He said the WHO was working with governments to form strategies for easing restrictions, but that this should not be done too soon.

“Lifting restrictions too quickly could lead to a deadly resurgence,” he said.

“The way down can be as dangerous as the way up if not managed properly.” [BBC]

At the time Tedros pressed for economy-killing lockdowns, Sweden’s epidemic was already cresting, with no lockdown required and no collapse of the medical system. Nabarro, meanwhile, made absurd claims that coronavirus would create a master race of the COVID-immune and a slave race of the still locked-down:

Immunity will become a societal advantage.

“It will be a frightening schism,” Dr. David Nabarro, a WHO special envoy on Covid-19 predicted. “Those with antibodies will be able to travel and work, and the rest will be discriminated against.” https://t.co/2ZsWd5NX4H pic.twitter.com/UXy5ClNLQB

Nabarro’s admission should have been bombshell news in the United States. One would think it would cause New York Governor Andrew Cuomo to reconsider his presence plan to impose yet another round of economically suicidal lockdowns on his state.

One might also wonder, how did The New York Times respond to Nabarro’s suggestion that Cuomo is uselessly and destructively punishing his state’s citizens?

The Times didn’t give Nabarro’s interview so much as a brief mention on its website. Neither did The Washington Post. CNN? You already know the answer to that. The Associated Press, CBS News, ABC News, NBC News, Politico, even Fox News — all of them skipped past this crucial interview.

Fully four days after the explosive interview, only two U.S. publications saw fit to note it. The New York Post wrote about Nabarro’s interview on Sunday, as did USA Today. Even then, USA Today‘s take was deliberately hostile, with Nabarro’s advice buried after a wave of sensationalist statistics intended to make the virus sound out of control.

Even Lefty World Health Organization gets it—lockdowns are TERRIBLE:

“Lockdowns just have one consequence that you must never ever belittle, and that is making poor people an awful lot poorer.”

The story eventually attracted wider attention thanks to a tweet from the president himself:

The World Health Organization just admitted that I was right. Lockdowns are killing countries all over the world. The cure cannot be worse than the problem itself. Open up your states, Democrat governors. Open up New York. A long battle, but they finally did the right thing!

All of this is because WHO’s health “expertise” is fake.

If WHO’s actual health expertise mattered, then its dramatic flip-flop on lockdowns would be a major story. The press and leaders would take it as a sign that ridiculous lockdown theatrics should be scaled back or eliminated entirely. There would be discussion about how seriously WHO can be taken, or whether the organization needs major reform. Joe Biden, who has repeatedly promised to “listen to the scientists,” would be interrogated on his assumptions. Does he now oppose strict lockdowns because WHO is criticizing them, or does he only really listen to scientists when their advice dovetails with increased Democratic Party power?

“The federal government has an obligation to lay out basic guidelines and the science matters,” Joe Biden says at Florida town hall on his proposed national mask mandate if elected president. “Listen to the scientists.” #BidenTownHall pic.twitter.com/Fcam8DH1NH

Authentic expertise is no longer WHO’s purpose, if it ever was. Global “expert” organizations are a lot like “expert” political pollsters. They aren’t paid to be right, and they face no consequences for being wrong. The “experts” at WHO exist simply to justify their own power and influence, and to justify the policy decisions of the already powerful.

Despite its colossal failure, nobody of importance at WHO will pay any price. Tedros Adhanom is still director-general. Nabarro is still a COVID-19 envoy. The group’s leadership and structure remain fundamentally intact. Nobody of note is resigning.

At the decisive moment in March and April 2020, citizens around the globe were pressured to give unprecedented power to political leaders in the name of containing an unknown viral outbreak. They surrendered freedom of movement, freedom of association, freedom of speech, even the freedom to earn a living, all for indefinite periods of time. WHO, enabled this hysterical overreaction and delivered pablum about how China’s authoritarian response was a model for the rest of the planet.

In two years, or five, or ten, when there is another major medical crisis, WHO will be trotted out again to justify some new overreaction by powerful governments. Its disgraceful failure of this year will be papered over, and so will the powerful’s collective decision to ignore it when it finally began to dispense correct advice. The organization’s apparatchiks will once again be touted as an “experts” that must be respected and obeyed. Those who disagree too loudly will be censored.

There is only one fix to the global tyranny of this fake “expert” class: Stop enabling them, and stop allowing our corrupt leaders to summon fake representatives of “science” to shove their latest power-grab down our throats.

Wade Crowfoot, California Secretary for Natural Resources: "I wish science agreed with you."

President Trump’s decision to pull the U.S. out of WHO, and cut off hundreds of millions in taxpayer funding for it, is one of the best moves of his presidency. If Trump is entrusted with a second term by the American people, he should greatly expand on this policy. In a just and sane system, WHOs leadership would be brought to trial for its criminally incompetent complicity in the Covid-lockdowns, which arguably amount to the greatest crime against humanity in recent history short of war or genocide.

Only by crushing the false idol of fake expertise, and driving its glorified con men in shame from the public square, can we finally usher in the emerging class of fearless, intelligent, evidence-based and patriotic leaders as worthy stewards of our great and imperiled nation.