← Front page / Exclusive
Will Marsha Blackburn Fight Big Tech Tyranny and Confirm Simington Or Will She Buckle to Silicon Valley?
November 13, 2020 (1w ago) 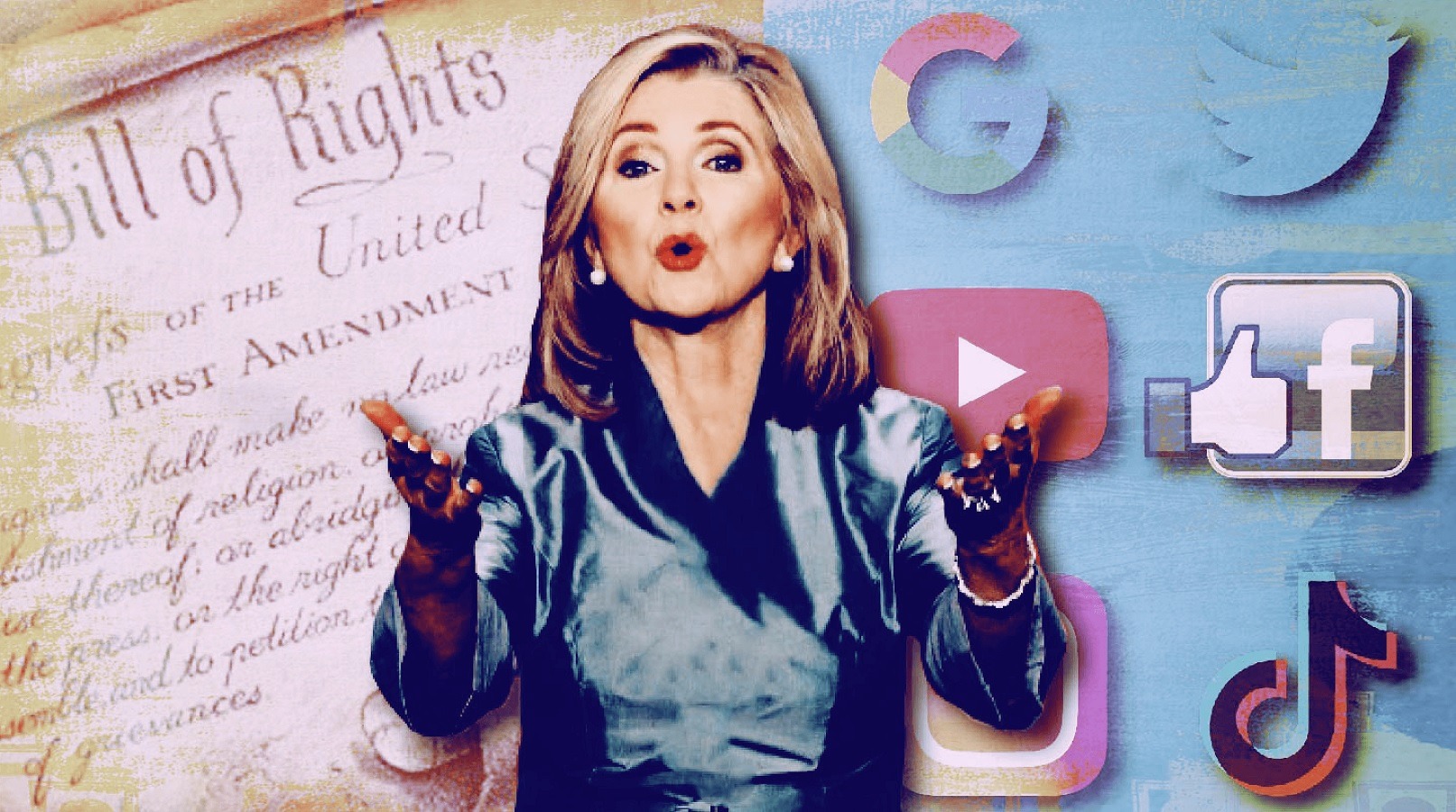 Revolver remains hopeful that President Trump will succeed in his efforts to stop the steal and triumph in the 2020 election. Irrespective of who is inaugurated on January 20, one of the best ways Republicans can prepare for the next four years is to confirm the president’s FCC nominee, Nathan Simington.

Over the past week, press attention has centered on President Trump’s purge of Afghan War holdouts in the Defense Department. These terminations are long-overdue, and will be well worth it if they allow President Trump to get U.S. troops home from Afghanistan by Christmas. But the reality is that if Biden becomes president, whoever is controlling Biden will be able to appoint whomever they want to the vast majority of federal jobs.

The Federal Communications Commission is different. Its five commissioners serve for five year terms, even when control of the White House changes. If Simington is confirmed now, he can serve for the entirety of Biden’s term. Other than making a lifetime appointment to a federal judgeship, confirming President Trump’s FCC pick is by far the most impactful personnel shift that can happen in the final two months of the president’s term.

The events of this fall have demonstrated that Big Tech’s censorship power is more oppressive than ever. Twitter, Facebook, and Google worked together to suppress important stories like the leaks from Hunter Biden’s laptop. After election night, they have enforced the dogma of Joe Biden’s victory while undermining the President’s efforts to stop the steal. Almost every Trump-aligned figure on Twitter has their tweets tagged with “fact checks” from Twitter, while on YouTube, searching “stolen election” sets one up for a lecture.

Simington, an appointee at the National Telecommunications and Information Administration, helped draft the administration’s petition to reform Section 230 of the Communications Decency Act. If that reform were implemented, it would drastically curb the censorship power of social media behemoths.

But disturbingly, other Republicans continue to inexcusably treat Simington coolly. Senator Dan Sullivan of Alaska has been characterized as a roadblock to confirmation, thanks to a feud with FCC Chairman Ajit Pai.

That spat, since it has nothing to do with Simington, should hopefully be resolved soon. But the biggest hindrance could be Tennessee Senator Marsha Blackburn. President Trump himself indicated as much on Tuesday, when he named Blackburn directly in a tweet urging Simington’s confirmation:

Nate Simington, a very smart and qualified individual, is having his Senate hearing today. Republicans will hopefully confirm him to the FCC ASAP! We need action NOW on this very important nomination!! @SenatorWicker @MarshaBlackburn @senatemajldr

Blackburn has even criticized Simington publicly:

Sen. Marsha Blackburn of Tennessee is among Republicans not yet backing Simington. “I had a brief phone call with him,” but hadn’t “sat down with him” for a more in-depth conversation, she said in October. “I wished he had been more prepared” for that conversation, including on spectrum issues. “For those of us who have worked on this policy area for a period of time,” Simington remains an unknown quantity, she said. “I anticipate that when we come back in the lame-duck [session], I’ll sit down with” him for a longer talk. [Communications Daily]

The Senate Commerce Committee held a hearing on Simington this week. Despite airing her concerns publicly, though, Blackburn didn’t bother to attend, either in-person or digitally. But no matter: If Blackburn was genuinely worried about Simington’s preparedness, her concerns should have dissipated by now. Telecom industry insiders confirmed to Revolver that Simington’s performance was stellar, well-received and alleviated any concerns about his knowledge or preparedness.

And if Simington is well-prepared, then there should be nothing to keep Blackburn from voting for him. For years, Blackburn has portrayed herself as a top Republican critic of Big Tech’s power to control online discourse:

Silicon Valley bias is real and dangerous. Whether Big Tech is censoring conservatives in “flyover country,” referring to California Republicans as Nazis, or stifling fellow competitors, it must end. See my op-ed below.#StopTheBias https://t.co/mmDa2Vd9ka

Big tech has made themselves the arbiters of free speech for the American people. The time has come for these platforms to stop removing content they simply don’t agree with while hiding behind Section 230’s liability shield.https://t.co/TCPy76TkjU

First they censor conservatives and now they want to tell people what to think of us. These aren’t “accidents” or “mistakes”. Silicon Valley Big Tech companies need to #StopTheBias. https://t.co/G9sIeIREPP

Free speech must be protected online. Big tech can’t play by one set of rules, while forcing conservatives to play by another. pic.twitter.com/JGqIGnZtAv

There is no denying the influence that Big Tech has over our lives. But increasingly, companies like Google and Twitter have become comfortable with abusing Section 230 protections. Silicon Valley has crossed the line with irresponsible content moderation and outright censorship of conservative voices.

Conservatives have suffered under liberal mob rule. Even I have been a victim of Silicon Valley’s irresponsible policies. As Chair of the Senate Judiciary Committee’s Tech Task Force, I am working with President Trump and my colleagues to examine efforts to reform Section 230. [Marsha Blackburn]

For years, Sen. Blackburn has talked a big game about containing tech. Now is her chance to prove she really means it by supporting Simington’s confirmation to the FCC.

The stakes are clear. If Joe Biden becomes president, Big Tech companies will feel more empowered than ever to shape speech to their liking, spreading their preferred views while suppressing and banning opinions elites find noxious. It is critical for Senate Republicans to do everything they can to contain tech’s power while they still have a supportive administration to do it.

Just like withdrawing from Afghanistan, the confirmation of Nate Simington offers Republicans a critical chance to leave a legacy that will outlive President Trump’s time in office, no matter what happens on Inauguration Day.

In contrast, failing to confirm Simington would represent a capitulation to Big Tech oligarchs who brought us this fraudulent and phony election in the first place. Any Republican who votes against Simington, or abstains from backing him, is voting to let Joe Biden populate the FCC. If they’re going to do that, they should save voters the confusion and simply become Democrats.

Sen. Blackburn should announce immediately that she is backing Simington’s confirmation –and other Republicans must follow suit. The clock is ticking and Revolver News is keeping track.

Sen. @MarshaBlackburn "looks forward to voting for Nathan Simington," President Trump's nominee for the FCC, her chief of staff tells me, dispelling any concerns on where she stands

Simington still requires a committee and floor vote by year's end, which is fast approaching

This is an excellent sign for Simington’s candidacy and the right’s battle against Big Tech. But the fight is not over, as Sen. Sullivan still has not committed to backing Simington, nor has a committee vote or Senate floor vote been scheduled. Revolver will continue to track this matter and hold Republicans accountable.