“Our people have all left Drudge ... They like REVOLVER and others!”
President Donald J. Trump
“...many of Drudge's long-time readers have fled to Revolver News...”
Tucker Carlson, FOX News
Close No thanks, I don't want breaking news emailed to me
America Just Experienced a Coup, But It Wasn’t By Trump 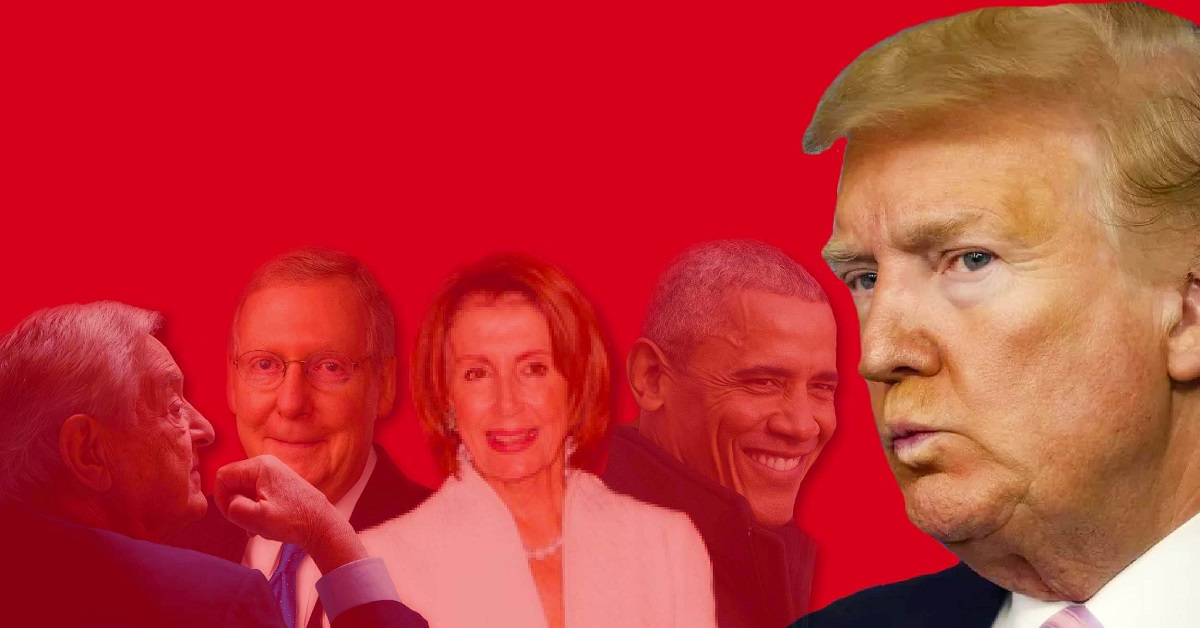 In its aggressive reaction to the storming of the Capitol Building on Wednesday, the press, Democrats, and even Republicans have settled on one preferred term: “Attempted coup.”

They are all either lying or in hysterics. The crowd that streamed through the Capitol on Wednesday had no plan and no goal, save chaos. It was a riot inside a government building, and nothing more.

But make no mistake. There has been a coup attempt in America this week. The globalist American regime has effectively overthrown Donald Trump two weeks early, and is now moving to secure its power.

Real coups are not clumsy mob attacks adjacent to lawmakers. Real coups, above all, are about control: Control of communications, control of bureaucracy, and above all, control of military power. And in the past few days, it is President Trump’s enemies who have seized control of all these things.

The most obvious sign of the unfolding coup is the most memorable: The suspension, and then banning, of the President’s Twitter account. After this ban was handed down, a flurry of other tech companies rushed to follow suit. 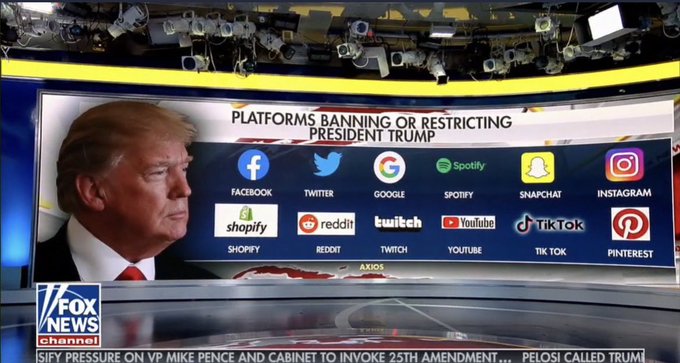 This isn’t just a petulant attack on the President. For tens of millions of Americans, the President’s Twitter, Facebook, and emails are the main ways they see his statements, unmediated by the press or other actors. While the President has other ways to reach the public, the bans slowed him down and made it far harder for the public to hear him. In effect, Big Tech has hobbled the President’s ability to speak out about what is happening.

Since it was obvious that the President would join Parler, there was an immediate campaign to ban that entire website as well. Google deleted it from the Google Play Store, while Apple issued an ultimatum, demanding that the company implement censorship or be deleted from the App Store. Then, Amazon Web Services decided to boot Parler off their servers, and every other company under the sun decided to follow suit.

This is a disconnection cascade.

Once the plutocrats at the big companies disconnect you, everyone else follows (or else).https://t.co/HTQgnkutoI

Our globalist overlords have decided that there must be no popular way for the President to easily communicate directly with the public he governs that is uncontrolled by powerful, left-aligned corporations.

After President Trump was banned, a cascade of bans rained down on his loyal supporters, including Rush Limbaugh, Steve Bannon, Ben Garrison, and more. Real coups are almost always about decapitation. They seek to neutralize anyone who could be a focal point of opposition to the unfolding seizure of power. This wave of bans sought to destroy the ability of people to fully understand what was happening until it was too late to respond.

As the mayhem unfolded in the Capitol, Pentagon leaders all but announced that they were no longer taking orders from the president:

Amazing statement by the Secretary of Defense.

Note whom Secretary Miller and Chairman Milley did NOT speak to: President Trump.

We have had something close to the de facto invoking of the 25th amendment. pic.twitter.com/KtrhD7WQUY

Amid mounting pressure to remove President Trump from office, House Speaker Nancy Pelosi on Friday spoke to the nation’s top military leader about taking precautions to ensure against Trump rashly initiating a military action or nuclear strike in the chaotic waning days of his presidency.

“This morning, I spoke to the Chairman of the Joint Chiefs of Staff Mark Milley to discuss available precautions for preventing an unstable president from initiating military hostilities or accessing the launch codes and ordering a nuclear strike,” Pelosi (D-San Francisco) said in a letter to her Democratic House colleagues Friday. [LA Times]

This is nothing more than a plot to illegally usurp the President’s constitutional powers. In other words, it is exactly what happens in a real coup. Real coup d’états always revolve around getting the military’s backing. And in this crisis, the military immediately showed where its loyalties lie.

That this could happen at all reveals the true nature of power in America. Ordinary Americans believe that the President’s powers rest with the office. But they do not: They can be revoked or reassigned by an amorphous globalist blob that goes by many different names: The D.C. Establishment, the Swamp, the Deep State. Some members of this blob may occasionally face elections, but it is not a democratic body.

By being overthrown two weeks ahead of time, President Trump has rendered America one last valuable service. The President was a great political mythbuster, and now, he has busted the myth that America is a free and democratic country.

The real fraud on the American voter is not that ballot boxes were stuffed with mail-in ballots, or that votes were switched in the dead of night, or that chain of custody was breached in the most consequential counties in swing states in America.

The greater fraud on the American voters is that the will of the people is never actually enacted into policy.

The idea that electoral results are the key to power is the biggest lie ever sold to the American voter. 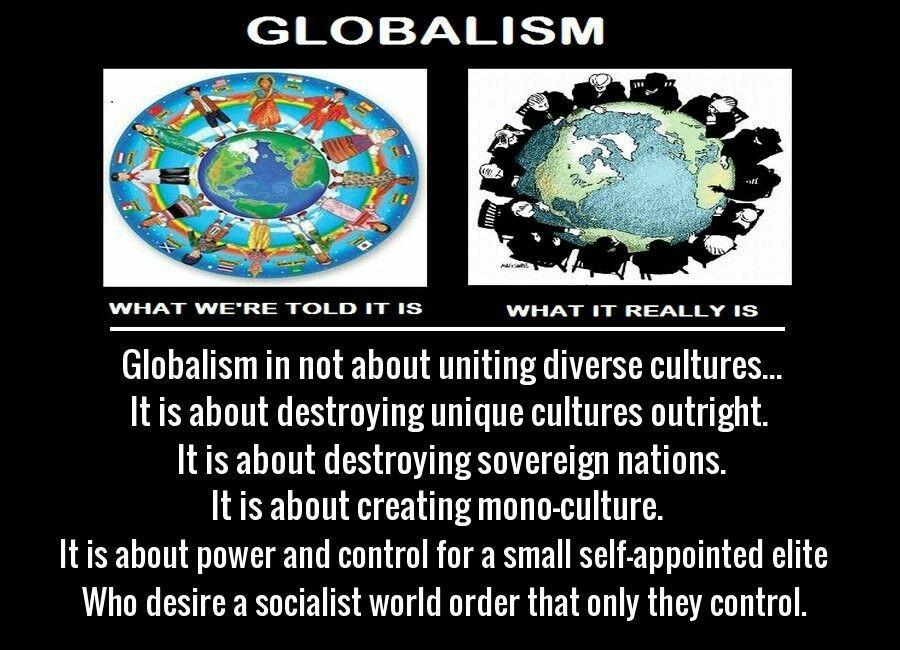 America has become a cultural oligarchy. No lone person is powerful enough to silence the President, or anyone else. But a Maoist collection of tech administrators, journalists, politicians, and bureaucrats can do whatever they want. No laws, no court rulings, and no norms restrain them, because acting in concert they can re-fashion all of them to their liking. Recall Hunter Biden’s laptop: Because enough of those in power decided the story didn’t matter, and wouldn’t be covered, it wasn’t. The story was memory-holed, instantly and completely, because enough of America’s real rulers decided it was important. It isn’t garden-variety “socialists” or “cultural Marxists” who repress and disenfranchise Americans. It is the full force of the globalist American regime.

This system cannot be brought down by winning one election. It will swallow up and destroy any upstart, like a Clydesdale stepping on a bug. The institutions that hold up the globalist American regime must be torn down brick by brick, and replaced by new ones that are actually pro-American and manned by a new patriotic elite. Only a new elite worthy of governing America will be strong enough to defeat America’s sinister globalist junta of the powerful.