If you were online last year around this time, your social media timeline was likely flooded with an endless stream of stories and memes featuring bats.

The Coronavirus was just gaining steam back in January of 2020 and rumors were swirling that the virus started because Chinese people ate “bat soup.” 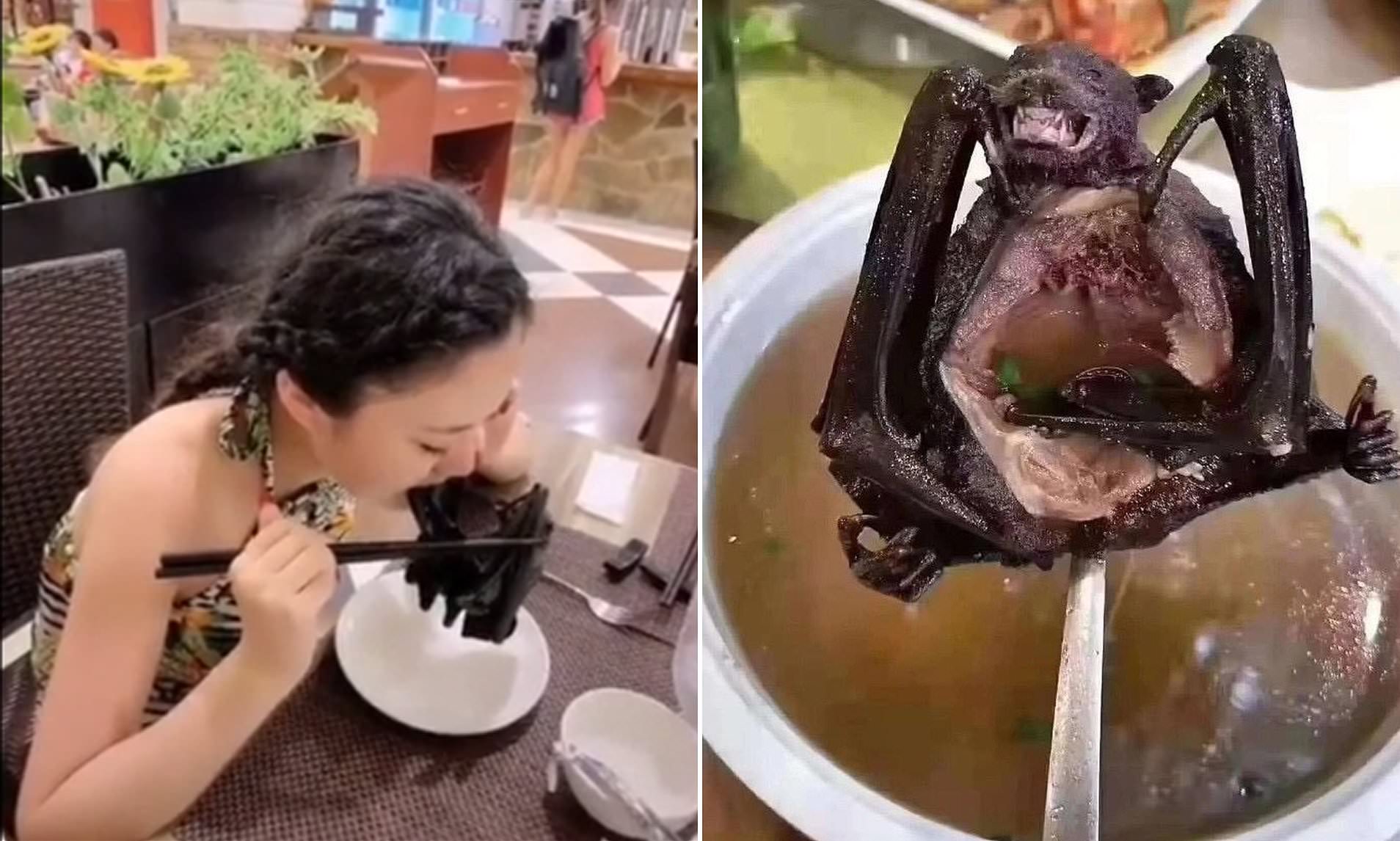 While most of the bat-themed stories and memes were outlandish, the Worldwide Health Organization (WHO) did admit that COVID-19 and bats are most likely ancestrally linked. However, that’s where they say the connection ends. WHO still claims the origins of COVID-19 remain a mystery.

A bombshell investigative report from Fox News host Steve Hilton has shed all-new light on the origins of Covid-19, and according to the report, it has nothing to do with bat soup and everything to do with Dr. Fauci and ferrets.

Ferrets are those adorable-looking fury little weasels that many Americans keep as pets…and Dr. Fauci is that annoying little weasel Americans can’t get rid of.

And when these two weasels finally came together inside a research lab in Wuhan, China, something unthinkable occurred – a deadly and destructive pandemic was created and unleashed upon the world.

That’s what Steve Hilton is claiming in his new investigation into the origin of the Coronavirus pandemic.

However, the story of COVID-19 doesn’t start in Wuhan, China. It actually began about ten years ago in a Netherlands research lab.

Specifically, researchers wanted to know if a non-airborne virus could be mutated in order to become a contagious airborne disease.

So, in order to find this out, researchers injected the ferrets with a flu virus and after a series of tests, they discovered that yes, non-airborne viruses could be manipulated to become much stronger and spread via respiratory droplets.

The findings were groundbreaking and this study paved the way for an entirely new type of scientific genomics research called “Gain of Function.”

The point of “Gain of Function” research was to replicate in a lab what had been done with the ferrets in the Netherlands – to take a virus and manipulate and mutate it to make it “stronger” in order to see if it will “gain new function.”

On the surface, it sounds a bit ghoulish and almost “Frankenstein-like,” but imagine the advances medical research could make in the field of virus testing and vaccines simply by recreating these viruses in a lab.

“Gain of Function” research was based on the philosophy, “keep your friends close, but your enemies closer.”

However, when you keep your enemies that close, you run the risk of getting burned.

Creating these ungodly strong and highly contagious viruses for research purposes could lead to an accidental or nefarious catastrophe of epic proportions.

But even so, and despite the danger, many in the scientific community believed the potential for progress outweighed the tremendous risks involved.

Dr. Anthony Fauci was one of those people.

The “Gain of Function” research quickly spread to labs all over the world and the money was flowing in from all corners of the globe, including the United States.

According to a Newsweek piece written in 2019, the National Institutes of Health (NIH), and the Fauci-led National Institute for Allergy and Infectious Diseases (NIAID), committed $3.7 million dollars to research bats and coronaviruses in China over a six-year period.

It’s worth noting in that particular Newsweek piece, the US intelligence backtracked from their earlier claims that the Coronavirus outbreak occurred “naturally,” and conceded that the pandemic “might” have started from a leak in the Wuhan lab.

But this new research wasn’t just about bats. It went deeper and darker than that. As a matter of fact, Dr. Fauci was among the first to fund the controversial “Gain of Function” ferret research in Wuhan, China. Fauci was so committed to the controversial work that back in 2011 he wrote an op-ed in The Washington Post, entitled, “A Flu Virus Risk Worth Taking,” where he vigorously defending “Gain of Function” research.

But something very interesting took place right before Obama’s moratorium on “Gain of Function” took effect.

Dr. Fauci had commissioned a study to assess the risk of new Coronaviruses emerging from wild animals. Fauci wanted to see what viruses could infect animals and humans. The directive behind the research and written in the project summary was “Gain of Function” manipulation.

But the Obama admin was getting cold feet about the program.

While many in the scientific community (like Fauci) were very excited by “Gain of Function” research, the more popular it became, the more scrutiny it received, and significant security issues were being raised. Eventually, the controversy got to be too much and in 2014 the United States pulled the plug.

NPR reported that the Obama administration was concerned about any research that could make the viruses more dangerous, so they wanted to stop and review studies to see if they could make these germs capable of causing more disease or spreading easily through the air.

This is the official US statement on defunding “Game of Function” research.

Gain-of-function studies, or research that improves the ability of a pathogen to cause disease, help define the fundamental nature of human-pathogen interactions, thereby enabling assessment of the pandemic potential of emerging infectious agents, informing public health and preparedness efforts, and furthering medical countermeasure development. Gain-of-function studies may entail biosafety and biosecurity risks; therefore, the risks and benefits of gain-offunction research must be evaluated, both in the context of recent U.S. biosafety incidents and to keep pace with new technological developments, in order to determine which types of studies should go forward and under what conditions.

In light of recent concerns regarding biosafety and biosecurity, effective immediately, the U.S. Government (USG) will pause new USG funding for gain-of-function research on influenza, MERS or SARS viruses, as defined below. This research funding pause will be effective until a robust and broad deliberative process is completed that results in the adoption of a new USG gain-of-function research policy 1 . Restrictions on new funding will apply as follows: New USG funding will not be released for gain-of-function research projects that may be reasonably anticipated to confer attributes to influenza, MERS, or SARS viruses such that the virus would have enhanced pathogenicity and/or transmissibility in mammals via the respiratory route. The research funding pause would not apply to characterization or testing of naturally occurring influenza, MERS, and SARS viruses, unless the tests are reasonably anticipated to increase transmissibility and/or pathogenicity.

Fauci kept the research alive by cleverly subcontracting the work out to a New York group called “Eco-Health Alliance,” led by Zoologist Peter Daszak. Daszak’s claim to fame is discovering the link between bats and SARS.

Fauci paid the three-plus-million dollars to “Eco-Health Alliance” and the research continued.

But here’s the wildest part.

According to Steve Hilton’s bombshell report, “Eco-Health” then turned around and subcontracted the “Gain of Function” portion of Fauci’s research back to the Wuhan Institute of Virology.

Hilton says the paperwork from Wuhan has a “reference number” attached that leads directly back to the funds Fauci paid to “Eco-Health Alliance.”

All roads lead back to Wuhan, and Fauci is driving the car.

It’s no secret that Fauci funded the Wuhun lab, there’s been a lot of reporting on his “general funding.” However, Steve Hilton’s bombshell report uncovered gory details about the specific work that was being done which nobody has reported on thus far.

According to the Wuhan paperwork that Mr. Hilton downloaded, the lab collected bat feces from a cave in China and discovered many cases of Novel Coronavirus in the samples. Researchers analyzed and sequenced their genetic information, then built new viruses off of those samples and infected human cells with them. That research revealed that their man-made viruses could actually behave exactly like a “natural virus.”

But it’s what researchers unlocked that is the most terrifying of all.

According to the report, the lab’s creation and research of the virus unlocked a very specific “gateway” into the human body. And even more curious and creepy is that the COVID-19 virus that we’re dealing with today has those exact same “gateway” characteristics.

Do you believe in coincidences? I don’t…

The COVID-19 virus sticks to cells 10-20 times stronger than the SARS virus did, and this is what makes COVID-19 so incredibly contagious.

Take a look at what happens when COVID enters the body:

Coronavirus enters the body through the nose, mouth, or eyes. Once inside the body, it goes inside healthy cells and uses the machinery in those cells to make more virus particles. When the cell is full of viruses, it breaks open. This causes the cell to die and the virus particles can go on to infect more cells.

The viruses created during the Wuhan research are not exactly the same as the COVID-19 virus we’re dealing with today. However, as Mr. Hilton points out, the research that was done confirmed that COVID-19 could be manufactured in a lab using the same techniques that were developed in Dr. Fauci’s project.

In addition, Fauci’s project continued for another three years.

Today’s COVID virus is different than any other “natural” virus we’ve seen in the past. Natural viruses become more contagious over time as they naturally mutate, but today’s COVID virus already had that feature “built-in” right out of the gate.

The paperwork from Dr. Fauci’s project explains how researchers swapped viruses from bats and other animals in order to make more infectious viruses to study.

And even more curious was what Chinese Virologisst Shi Zhengli said – she explained that the “backbone” of this COVID-19 virus matches other man-made viruses from the Wuhan lab library.

According to Steve Hilton, experts say that COVID-19 looks like two different strains from bats, and another unidentified animal…possibly the ferret again?

The question is this – can something like COVID-19 happen naturally? And if so, why does it look and act so similarly to man-made viruses from just a few years before, many of which are from Dr. Fauci’s personal disease vault?

I don’t believe in coincidences, but I also don’t know how COVID came to be or how it was unleashed on the world. But I do think that Steve Hilton’s investigation is the most in-depth and compelling that we’ve seen thus far. It definitely puts Fauci in the thick of things in a very precarious way, and it opens the door to a lot more questions.

Personally, I find it very hard to believe that all of this groundbreaking research was going on without Obama’s knowledge. He’s a man that loves to “weaponize” things. That’s what his entire legacy consists of – weaponized IRS, Intel, and media.

Or was everything just one big coincidence?

All good questions and the American people deserve answers.