Texas’s Power Grid Disaster Is Only The Beginning

Record-setting cold and snowfall in Texas has in turn caused dramatic power outages and rolling blackouts across the state. Texans stuck in powered-off apartments with no way to warm themselves have fled to “warming centers.” A few have died from carbon monoxide poisoning trying to warm themselves with a car.

The mess with the Texas power grid is only the beginning. In the years to come, American infrastructure will fail more and more often, as America becomes less capable of maintaining the core elements of a First World country.

Conservatives have been eager to blame Texas’s problems on increased use of wind power. It certainly played a role. Turbines froze in the cold and the focus on expanding renewable energy sources over conventional gas and oil left the state less able to expand energy production in response to a surge.

But solar energy is far from the only culprit. Another factor was simply that Texas infrastructure could not handle an outlier weather event.

While ice has forced some turbines to shut down just as a brutal cold wave drives record electricity demand, that’s been the least significant factor in the blackouts, according to Dan Woodfin, a senior director for the Electric Reliability Council of Texas, which operates the state’s power grid.

The main factors: Frozen instruments at natural gas, coal and even nuclear facilities, as well as limited supplies of natural gas, he said. “Natural gas pressure” in particular is one reason power is coming back slower than expected Tuesday, added Woodfin.

“We’ve had some issues with pretty much every kind of generating capacity in the course of this multi-day event,” he said. [Bloomberg]

In other words, faced with a black swan event, Texas’s power generation system imploded. It faced a major challenge, and wasn’t up to it. The cost is several lives and billions of dollars in economic damage.

Texas’s struggles are only a standout example of a problem that has been building up for years. Last summer, California suffered rolling blackouts because electrical providers were unprepared for a surge in demand during a heat wave. But the problem is greater than that. America’s electrical reliability has been declining, almost everywhere, for decades. The United States of America now trails competing nations, often dramatically.

In Japan, the average home sees only 4 minutes of power outages per year. In the American Midwest, the figure is 92 minutes per year. In the Northeast, it’s 214 minutes; all those figures cover only regular outages and not those caused by extreme weather or fires. 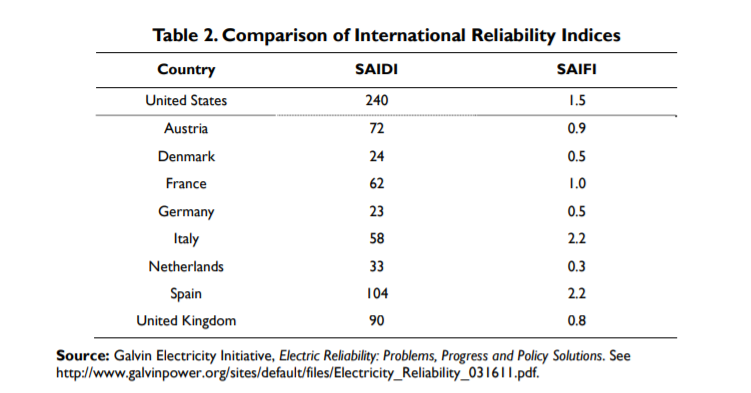 Sometimes, when America trails in an important measure of productivity or effectiveness, it has simply failed to keep up with the advances of other countries. But power supply is different. Forty years ago, America had no trouble keeping the lights on. It has steadily gotten worse at this basic function. A recent Popular Science article laid out the problem:

According to an analysis by Climate Central, major outages (affecting more than 50,000 homes or businesses) grew ten times more common from the mid-1980s to 2012. From 2003 to 2012, weather-related outages doubled. In a 2017 report, the American Society of Civil Engineers reported that there were 3,571 total outages in 2015, lasting 49 minutes on average. The U.S. Energy Administration reports that in 2016, the average utility customer had 1.3 power interruptions, and their total blackout time averaged four hours. [Popular Science]

What causes this? One popular answer is simply aging infrastructure. America was one of the first countries to build a modern power grid, so infrastructure in many areas is very old and now fails with increasing frequency.

Of course, that naturally raises the question. If infrastructure is aging, why isn’t it being updated or replaced?

That is a political question, with many answers. One reason is that maintaining existing infrastructure may be the single least-sexy use of public money, and thus is one of the first things cut back during budget crunches. Another factor, though, is America’s warped public spending. For decades, politicians have found it easy to build up a political base by upping the pay of public employees. The result is that, while enjoying rock-solid job security, public employees at all levels outearn private sector workers. Millions of current and former workers are also the beneficiaries of ridiculously generous pension plans which are routinely underfunded as well. When these pensions clash with basic infrastructure maintenance, the pensions win:

In real dollars, state governments’ investments in infrastructure dropped by 3.2 percent from 2007 to 2017, with ups and downs along the way. But infrastructure spending relative to gross domestic product (GDP) dropped almost every year between a 2009 peak and 2017, following more than two decades of stability. In fact, 2017 marked the lowest level of funding as a share of the economy in more than half a century. States’ declining infrastructure investment relative to GDP is a sign that spending on fixed assets has not kept pace with economic growth. [Pew Trusts]

But infrastructure isn’t just about allocating enough funding. It’s about people. The quality of a country’s broad-based infrastructure is heavily linked to the skills of its common blue-collar workers and local bureaucrats. When these groups are more capable, everything works a little bit better in a country. They cut fewer corners when building new infrastructure, and are more diligent in maintaining it. They work more diligently and efficiently. They are more likely to use the right materials. They avoid preventable errors.

For an example of a completely avoidable infrastructure calamity, look at Flint, Michigan. The city’s famous water crisis occurred when the city switched from Detroit’s water system to drawing water from the Flint River. The river water was perfectly safe to drink, but left untreated it corroded the protective lining of the city’s pipes, eventually allowing lead to leech into the water. And tragically, avoiding that problem was easy.

Cities such as Detroit add orthophosphate to their water as part of their corrosion control plans because the compound encourages the formation of lead phosphates, which are largely insoluble and can add to the pipes’ passivation layer. By press time, C&EN was unable to get a comment from Flint city officials about why a corrosion inhibitor wasn’t added to the river water. The entire Flint water crisis could have been avoided if the city had just added orthophosphate, Edwards says. [Chemical and Engineering News]

Adding orthophosphate would have cost Flint only a few thousand dollars a year. Instead, a $600 million calamity happened.

Another red flag for America’s infrastructure future is the Washington, D.C. Metro. The Metro has been known for years as one of the world’s worst, plagued with delays, safety issues, cost overruns, and poor maintenance.

By the early 2000s, workers began to notice a growing disregard for safety throughout Metro. “We’d report [safety violations] and then nothing would be done,” says Sherman Johnson, a WMATA mechanic from 1983 to 2010. “The [work order] would be closed, indicating that the problem had been corrected, but then you’d go and check and most times no one had even been there, let alone fixed anything.” Meanwhile, management focused on making sure employees wore their uniforms correctly and used Metro-issued microwaves to cook food instead of their own.

This wasn’t the only troubling thing the feds found in Metro’s plumbing. The FTA discovered that train drivers regularly relieved themselves on the tracks because supervisors, due to inadequate training, weren’t comfortable taking the wheel to give them bathroom breaks. [Washingtonian]

How did the Metro get so horrid? In large part, because of wretched hiring. A 2012 report in The Washington Times revealed that Metro hiring was starkly racialized, with applicants clearly being hired or rejected based on skin color rather than demonstrated job aptitude:

Ninety-seven percent of the bus and train operators at the Washington Metropolitan Area Transit Authority are black, with only six white women out of more than 3,000 drivers … It is a culture in which a white male engineer near completion of a Ph.D. was passed over for a management position in favor of a black man who was barely literate, multiple staffers said. … Dozens said white workers, especially women, were openly subject to racist and sexist remarks without repercussion — behavior that drove many targets to seek transfers or leave the agency. All said they have been inexplicably passed over hundreds of times for promotions to positions such as station manager while others with less seniority passed them by. [Washington Times]

Why do Metro’s particular failures matter? Because its rotten ethos is spreading across the country. While Metro is an outlier case, where a major public agency became a racial racket, countless agencies are adopting “diversity” guidelines that encourage choosing employees and contractors based on skin color rather than competence alone. When ability and effectiveness ceases to be the sole consideration for jobs, effectiveness suffers. That may not matter much for writers at The New York Times, where the only victims of affirmative action (besides whose passed over for jobs) are the paper’s readers. But for the basic buildings blocks of civilized life, the consequences can be severe.

There are other reasons to be worried about America’s future supply of builders, technicians, and repairmen.

For decades, America’s ruling elite have deliberately cultivated an underclass via low-skill immigration, both legal and illegal. While they were brought here as workers, these immigrants are people as well: Their children are the future human capital stock of the United States. When America admits an immigrant with fewer skills than the average American, they are admitting a person whose children will, on average, grow up to have fewer skills than most American workers. They will certainly have fewer skills than the children of the highly-skilled immigrants America has chosen not to prioritize.

The Trump Administration sought to change this, promoting a plan to focus immigration on highly-skilled workers who would have more highly-skilled children. Congress refused to pass that plan. Now, the Biden administration is mulling amnesty for low-skilled illegal immigrants, and is pledging to octuple arrivals of (mostly low-skill) refugees. If Biden succeeds, he will create an America where the population is less skilled, and less able to maintain the basic trappings of modern life. And that may mean a country where the lights go out a lot more often.