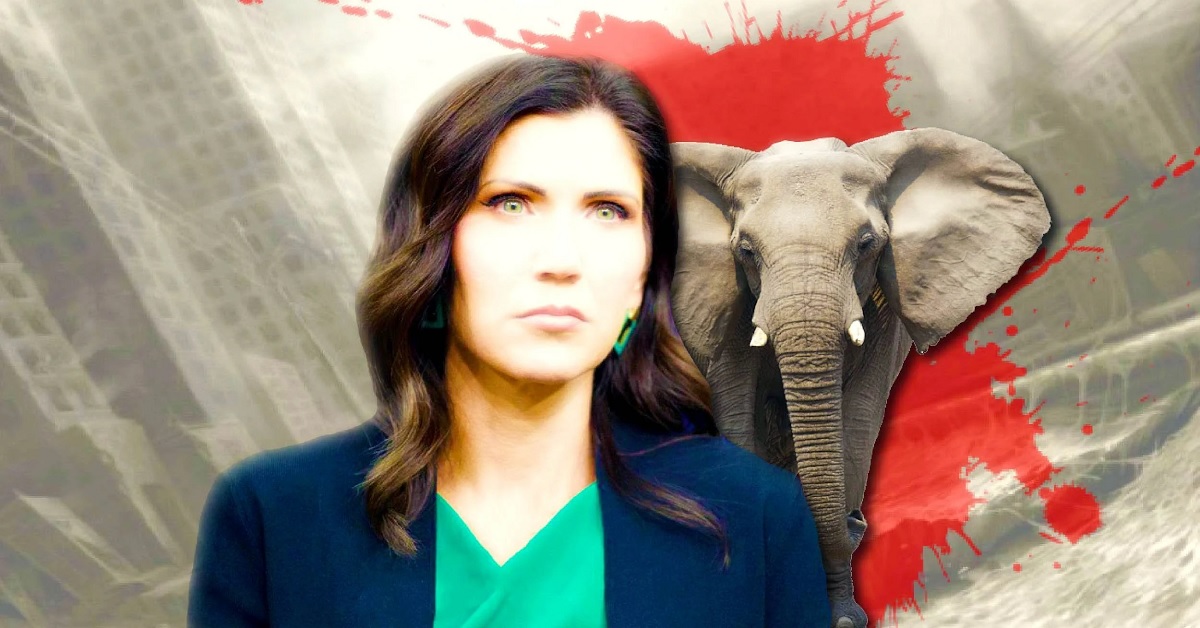 Gov Kristi Noem has taken much deserved heat for her disappointing and politically disastrous decision to veto a bill that would have completely banned transsexuals from invading women’s sports.

Once a prized star in the constellation of GOP Presidential hopefuls, South Dakota Governor Kristi Noem has become an object lesson in never investing too much hope in a politician, too early.

Tucker: “So you’re saying the NCAA threatened you & you don’t think you can win that fight…so you’re caving to the NCAA.”pic.twitter.com/h3lm8L6bjw

On the bright side for both Noem and conservatives, it’s early. President Trump made plenty of errors, but overcame them to win the presidency and deliver victories for Americans. It’s possible Noem could do the same thing.

But don’t bank on it. Noem’s failure on the transgender sports bill is not her first time failing her constituents. Noem has repeatedly been offered chances to stake her claim as a serious national ideological trendsetter for the Republican Party, and she has repeatedly rejected these opportunities.

Syrian immigrant Ahmad Al Aliwi Al-Issa’s massacre of ten people in Boulder, Colorado hearkens back to a prior time when Noem let Americans down, on refugee resettlement.

Like every other part of America, South Dakota has received thousands of refugees from around the globe. During President Obama’s second term, South Dakota received refugees faster than any state except for two. 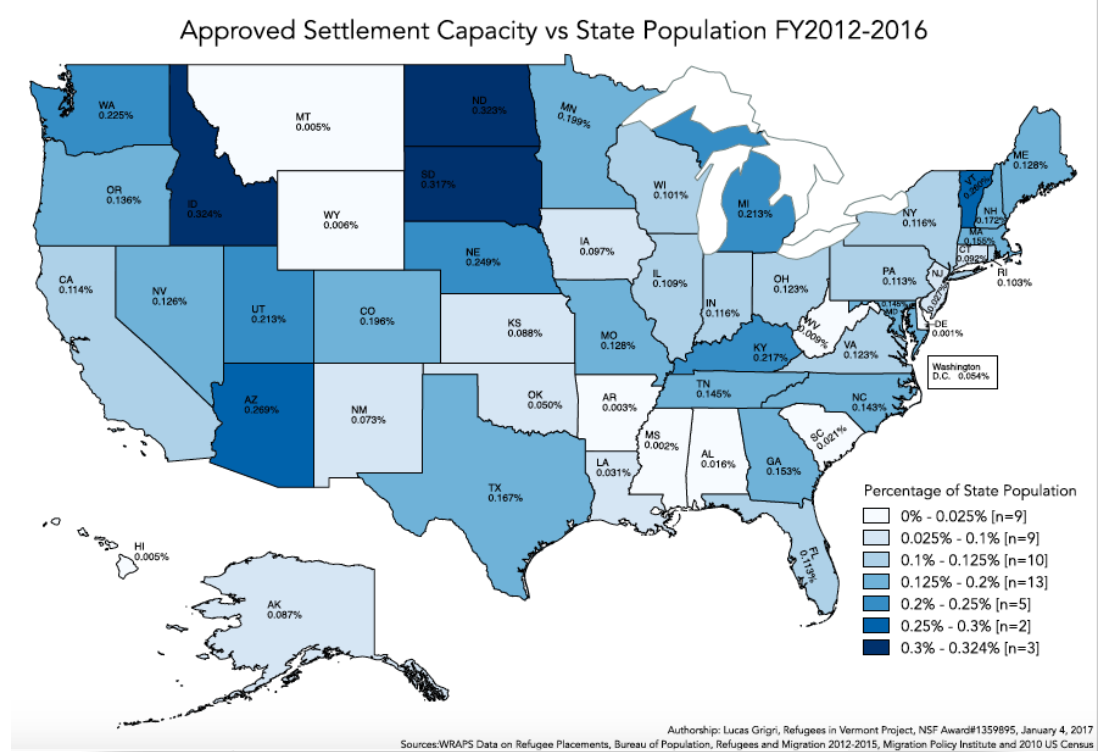 Political leaders present this as a marker of America’s altruism. Perhaps decades ago, it really was. Today, as America declines, the mass admission of refugees is just another front in an elite operation to crush native-born Americans, entrench their own power, and irreversibly transform the country. The small South Dakota town of Huron, in fact, has become a leading example of this transformation.

The work is monotonous, but the workers are markedly diverse. They hail from Brazil, China, the Dominican Republic, El Salvador, India, Nepal, South Korea, Vietnam, Puerto Rico, and the Micronesian archipelago of Chuuk. But most of the 1,200 employees are Karen, members of an ethnic group from Myanmar (historically known as Burma) whose families came to the United States as refugees. Their presence in Huron, South Dakota, 8,000 miles from their homeland, is an accident of history that has revived a dying city.

Just before the turkey plant opened in 2005, about 97 percent of kids in Huron schools were white. Today, just over a third of kindergartners and first graders are white. In 2018, the Huron area took in more people from abroad and Puerto Rico, as a share of its 18,800-strong population, than any other place in the United States. In less than 15 years, the community has gone through a demographic transformation that usually takes generations. [Mother Jones]

Whether what has happened to Huron counts as a “revival” or a “displacement” may depend on who you ask. Instead of hiring American-born workers for an American plant, corporate America relies on imported low-wage work from the other side of the planet. No doubt, native Huronians find their town unrecognizable.

One of the major achievements of the Trump administration was a major cut to the number of refugees admitted into the United States every year. Not only that, but in 2019 the administration gave U.S. states the right to turn down refugee resettlement entirely.

Given how many refugees her state was sent throughout the Obama administration, Noem might have jumped at the opportunity to take a break.

Instead, Noem turned down the president’s offer. More refugees, it turns out, was exactly what South Dakota needed. It’s not like turkey plants can be staffed by Americans or anything.

Noem’s decision didn’t come as a huge shock. In 2018, when the president remarked in private that the U.S. should take fewer immigrants from “shithole countries,” Noem strongly disagreed. Really, she argued, there was no problem at all with letting in more people from deeply dysfunctional societies.

After a Walleyes Unlimited event in Sioux Falls, the Republican Congresswoman said the remark was inappropriate if Trump did, in fact, make it.

“I think that it is a heated topic right now and it maybe raised emotions around it,” Noem said about the discussion surrounding Deferred Action for Childhood Arrivals (DACA) reform. “It’s something we have to fix.”

While in Congress, Noem voted well on immigration issues, and she wasn’t the only governor to keep taking refugees (only Texas’s Greg Abbott was brave enough to request a halt). She’s far from the worst Republican on immigration matters. But the fact remains that when given the chance to be a genuine leader on the issue, at the potential cost of alienating business leaders, she refused to step up. It’s a decision most Republican leaders would make. But that is exactly why we need new and better Republican leaders.

Refugee resettlement did not prove to be Noem’s only prior letdown. In fact, Noem caved not too long ago specifically on transgender issues. It appears that perhaps South Dakota governors abandoning their base to placate woke capital is a well-established tradition in the state.

In 2016, South Dakota lawmakers passed a bill requiring public school students to use bathrooms for their biological gender. Gov. Dennis Daugaard vetoed it. While running to replace Daugaard in 2018, Noem said she would have signed the bill.

South Dakota’s lawmakers were silly enough to think this promise meant Noem seriously opposed the transgender madness that is mutilating America’s children. In early 2020, they considered a more expansive bill, which would have done far more than any bathroom bill to protect South Dakota’s children and push back against the tide of transgender insanity. House Bill 1057 would have made it a criminal offense for South Dakota doctors to operate on children or prescribe them puberty blockers for the sake of “gender confirmation” treatments. The bill passed the state house. If it had become law, it would have been by far the most serious counterattack against the transgender mafia, and Noem could have been the hero leading this attack.

But it never came to pass. H.B. 1057 died in the state senate, so Noem never got the chance to veto it. But she absolutely played a role in the bill’s demise.

Gov. Kristi Noem said she is watching House Bill 1057 as it moves through the legislative process, but she has “a few concerns” about it.

The bill criminalizing medical treatment of transgender children younger than 16, including hormone treatment, puberty blockers or gender confirmation surgery, still needs to pass both the House and Senate before it reaches Noem’s desk and it could be an amended version by that time.

“When you take public policy and try to fill parenting gaps with more government, you have to be very careful about the precedent you’re setting,” she said. “That’s really the viewpoint I’m looking at it through.”

Noem said she’s heard from people both in South Dakota and out of state about HB 1057. Bills receive a lot of attention every year and she’ll watch the bill as it works its way through the process, she said.

“My job every day is to wake up and focus on what I can do to help South Dakota be successful, and our families here, so we’re focusing on workforce and education, bringing the next big industry to the state,” she said. [Argus Leader]

Beneath the surface, Noem’s message was clear: The bill shouldn’t pass, because corporate interests didn’t want it to pass, and corporate interests came ahead of protecting children from mutilation at the hands of demented doctors and brainwashed parents.

With the governor’s strong support, the bill may have passed, and South Dakota could be taking the lead in resisting the evil of child sex changes. Instead, it has remained servile in its devotion to woke capital.

Over the years, reliably catering to corporate interests above all has proven to be the most consistent theme of Kristi Noem’s political career. Noem was good on coronavirus because lockdowns were bad for business. But business wants low-wage workers and it wants NCAA tournaments, so Noem’s chances of leading on immigration or transsexualism are zero. As a mafioso might put it, it’s strictly business.

Is Noem a particularly bad Republican? Not at all. A Republican who postures as a champion of the people but then abandons them to serve business is the norm. Kristi Noem has had three chances to really set herself apart as more than a normal Republican. She failed. Republicans should look elsewhere for their next champion.