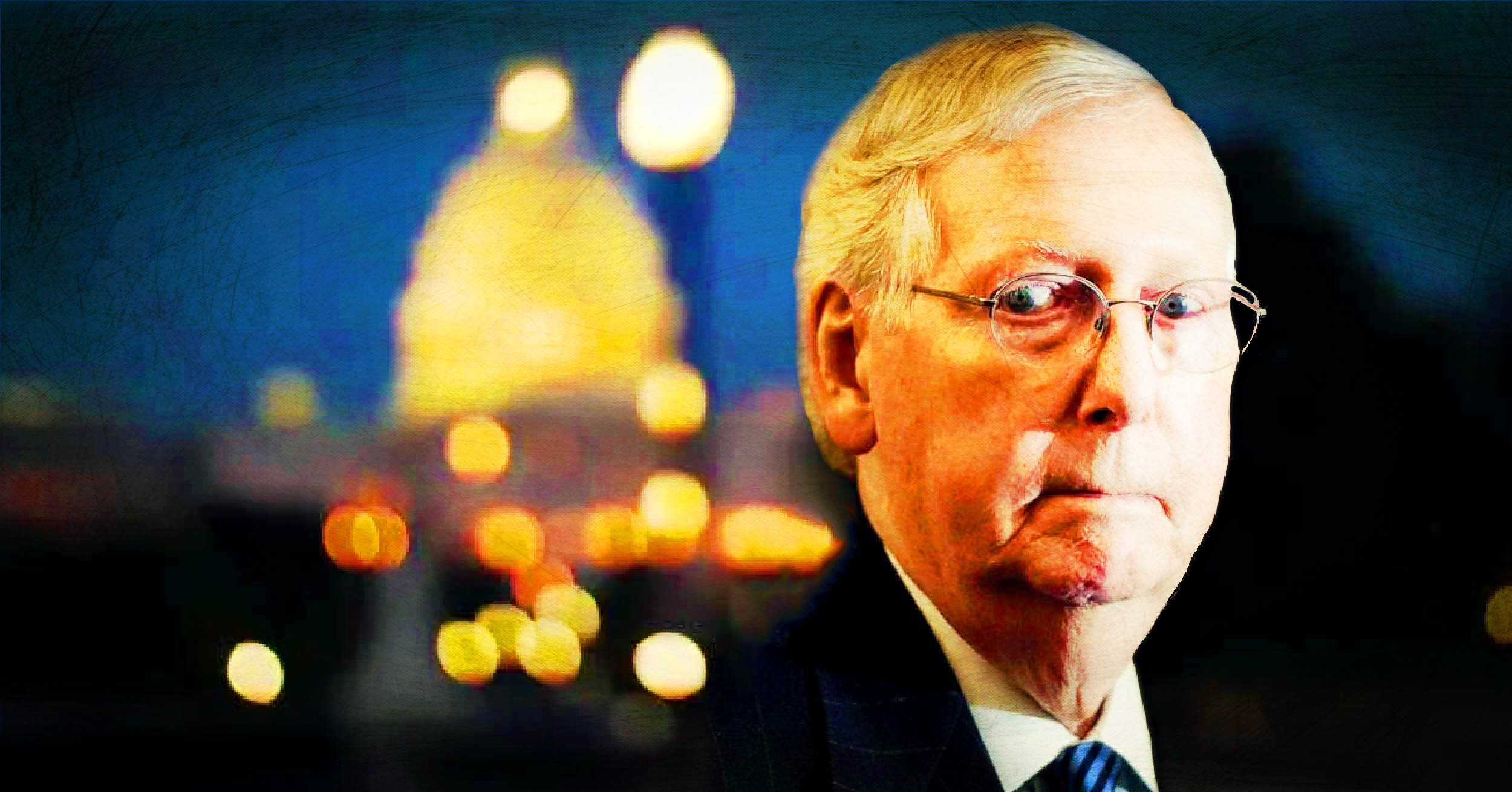 Senate Minority Leader Mitch McConnell has been mounting a spirited defense of the filibuster in the face of Democratic efforts to permanently eliminate it.

For the sake of avoiding disastrous left-wing policies, Republicans should support that effort. But McConnell’s efforts to sustain the filibuster also expose the establishment GOP’s scam to keep its hold on power without delivering a thing for its base.

During remarks on the Senate floor Tuesday, McConnell warned that the Republican Party would go “scorched earth” to prevent the passage of Democratic legislation if the filibuster is eliminated.

“Let me say this very clearly for all 99 of my colleagues: Nobody serving in this chamber can even begin to imagine what a completely scorched-earth Senate would look like. None of us have served one minute in a Senate that was completely drained of comity and consent. This is an institution that requires unanimous consent to turn the lights on before noon. to proceed with a garden-variety floor speech, to dispense with the reading of lengthy legislative text, to schedule committee business, to move even noncontroversial nominees at anything besides a snail’s pace.

I want my colleagues to imagine a world where every single task requires a physical quorum — for which the Vice President does not count, by the way. Everything that Democratic Senates did to Presidents Bush and Trump, everything the Republican Senate did to President Obama, would be child’s play compared to the disaster that Democrats would create for their own priorities if they break the Senate. [Senator McConnell]

McConnell’s threats are empty. A Democratic majority capable of abolishing the filibuster is also able to remake the Senate’s rules to obliterate other procedural stunts.

But McConnell’s second threat was both more real, and more ridiculous. McConnell warned that if the filibuster vanishes, he might finally pass legislation that Republican voters want:

As soon as Republicans wound up back in the saddle, we wouldn’t just erase every liberal change that hurt the country. We’d strengthen America with all kinds of conservative policies with zero input from the other side. Nationwide right-to-work for working Americans. Defunding Planned Parenthood and sanctuary cities on day one. A whole new era of domestic energy production. Sweeping new protections for conscience and the right to life of the unborn. Concealed-carry reciprocity in all 50 states and the District of Columbia. Massive hardening of security on our southern border. [Senator McConnell]

McConnell’s speech is meant as a warning to the left about the future. But it might inspire a different response from the average GOP voter.

Wait a minute. If all of this could happen without the filibuster, why didn’t you get rid of it four years ago?

President Trump’s first two years in office presented an unprecedented opportunity for the modern Republican Party. Over the past 90 years of American politics, Republicans have held both houses of Congress plus the presidency for just eight of them, and four of them were under George W. Bush. Given the enormous deficiencies of Bush-era conservatism, Donald Trump’s early years in office were quite possibly a once-in-a-lifetime chance to quickly enact far-reaching conservative policies at the national level. President Trump promised a dramatic immigration overhaul that put Americans first, a surge in infrastructure spending, curbs on Big Tech’s power, and a replacement for Obamacare.

None of that happened. Why? Because McConnell didn’t want it to happen. McConnell may tell voters now that he wants abortion restrictions, border security, and nationwide concealed carry. But in reality, McConnell preferred the status quo. Thanks to the filibuster, he always had a readymade excuse for his inability to deliver: “Sorry, we can’t. You need sixty votes.”

But as the Democratic push to abolish the filibuster shows, that’s a lie. The filibuster is a procedural relic, one that can be obliterated with a majority vote at any time. And in fact, it has been by McConnell himself.

Senate Majority Leader Mitch McConnell moved to change the Senate rules after Democrats blocked Gorsuch’s nomination minutes before, 55-45. All 52 Republicans then supported the vote to go nuclear, and Gorsuch subsequently advanced to a final confirmation vote with a simple majority.

“Our Democratic colleagues have done something today that is unprecedented in the history of the Senate. Unfortunately it has brought us to this point,” McConnell said. “We need to restore the norms and traditions of the Senate to get past this partisan filibuster.” [Politico]

When the issue was actually something the McConnell faction cared about, the filibuster was never a barrier. Even the establishment cares about getting Supreme Court justices appointed, so when Democrats filibustered Neil Gorsuch, Republicans immediately bypassed it. Passing corporate tax cuts mattered, so in 2017 they were happy to use reconciliation to ram through the Tax Cuts and Jobs Act of 2017.

But Mitch McConnell has zero interest in actually securing America’s border, which might imperil the earnings of the donor class. Likewise, he has no interest in defunding Planned Parenthood, because there might be backlash if he did so, and then he couldn’t as easily harvest votes from voters he likely views as abortion-obsessed rubes.

The filibuster does not protect the rights of the minority party. It protects the majority from keeping its own promises. And Mitch McConnell has a lot of promises he wants to break.

For McConnell and all his allies, the filibuster is perfect. They get the policies they want, ignore the ones they don’t, and then go back to fundraising and tweets promising change.

If conservatives, populists, nationalists, or just plain old American patriots ever want their interests actually  represented in government, they will need to be aware of scams such as the filibuster. Indeed, as much attention as we’ve given to voter fraud in the direct sense of votes not being counted properly, there is a different type of voter fraud that deserves even more attention. The notion that your interests will be represented just because the candidate you vote for gets into office is itself a form of voter fraud. This second and more insidious type of voter fraud is complicated, and many mechanisms of so-called democracy are designed to facilitate it. If patriots ever want to really win, in the sense of having the people’s will enacted by a representative government, then we need a deep and sober understanding of all the bottlenecks in place that allow this second type of fraud to persist.

As to the filibuster issue, there’s only one fix for this kind of failure: Get rid of McConnell, and all other Republicans who use bogus procedural excuses to avoid delivering on their promises. Conservative nationalists deserve elected leaders who will actually deliver what they want. If the Republican Party isn’t willing to supply those leaders, then it must be torn down utterly, and rebuilt from better human material.