“Our people have all left Drudge ... They like REVOLVER and others!”
President Donald J. Trump
“...many of Drudge's long-time readers have fled to Revolver News...”
Tucker Carlson, FOX News
Close No thanks, I don't want breaking news emailed to me
On January 8th, Nancy Pelosi Made an Ominous Phone Call That Could Change Everything

← Front page / Exclusive
On January 8th, Nancy Pelosi Made an Ominous Phone Call That Could Change Everything
March 28, 2021 (1y ago) 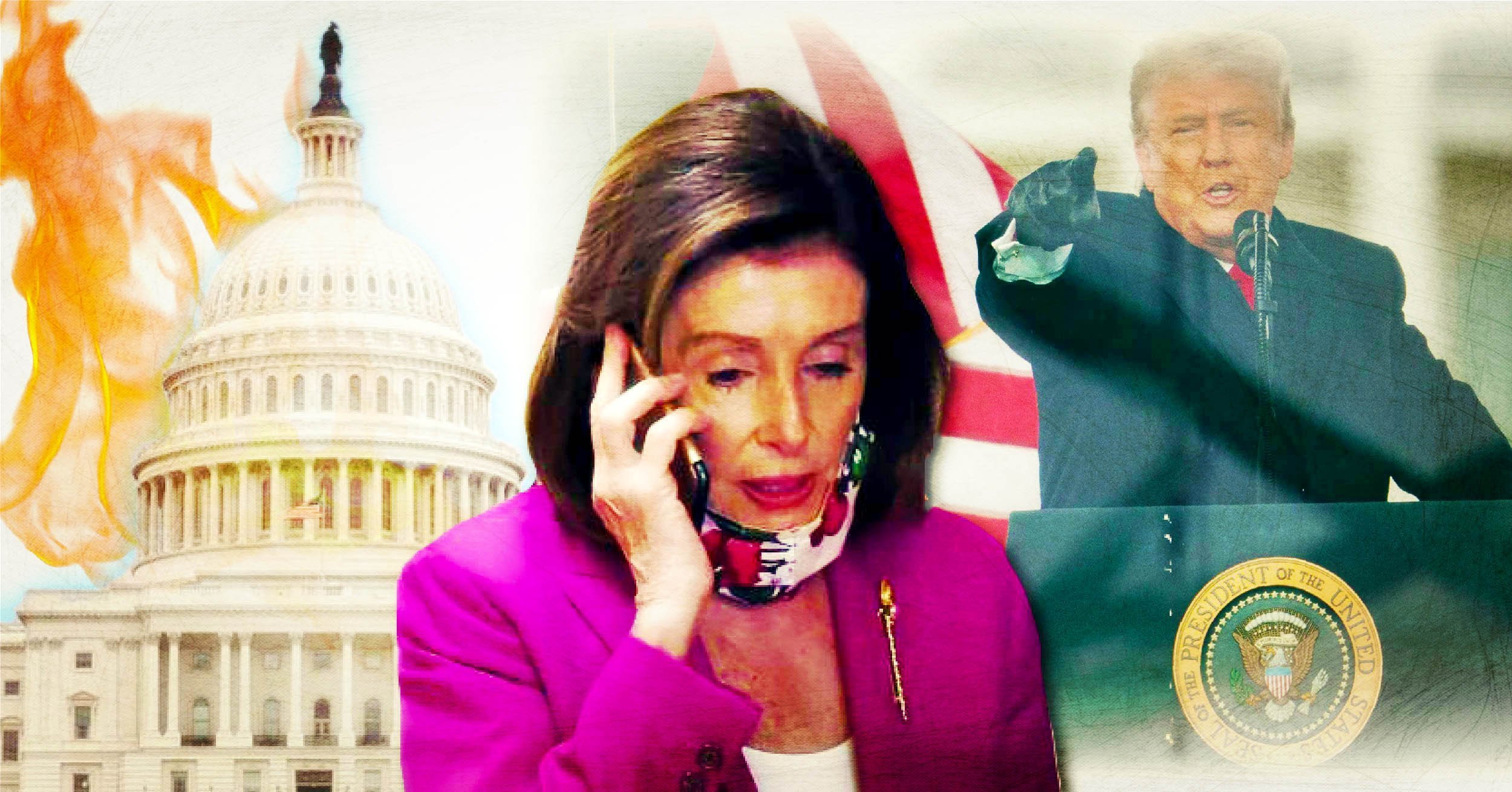 The Democrats and the mainstream media have successfully branded the January 6th melee as an “armed insurrection” even though nobody was armed.

In reality, the only people who had loaded guns were the Capitol Police. And as a result, one unarmed Trump supporter by the name of Ashli Babbit was shot and killed — and sadly, nearly four months later, her death still remains a mystery.

The January 6th event was a mixed bag of goodies. Many different types of people showed up for a lot of different reasons. Fed-up Americans who believed their votes were stolen were there to let their voices be heard. Rowdy patriots showed up ready to take back the government and drain the swamp.

Left-wing agitators and reporters were on sight to stoke the fires of “revolution,” and good-hearted MAGA “grandma and grandpas” who just wanted to support President Trump were innocently meandering around as well.

Some agitators fought with police in front of the cameras, while other groups were quietly ushered into the Capitol building by DC officials who looked more like friendly tour guides than law enforcement.

What happened on January 6th was not an insurrection by any stretch of the imagination. Instead, it was a jumbled assortment of protest and political theater that was cleverly molded by Dems and the media to form a “domestic terrorism” narrative.

But unbeknownst to most Americans, there actually was an “insurrection” that took place at the Capitol — however, it didn’t happen on January 6th. It took place on January 8th and it was carried out by Nancy Pelosi.

Two days after the Capitol melee, Democrat House Speaker Nancy Pelosi made an ominous phone call that could change the entire game.

On January 8th, Nancy Pelosi picked up her phone and bypassed the military chain of command by making a jaw-dropping direct appeal to Army General and Chairman of the Joint Chiefs of Staff Mark Milley.

Think about that for a minute: a politician who has no place whatsoever within the national security chain of command went around the already-established chain of command channels and used her power and position to try and give direct orders to the nation’s top military officer.

What Nancy Pelosi did when she made that phone call was as close to an “insurrection” that you can get, and it was far more menacing and dangerous than anything “politically motivated” that went down at the Capitol on January 6th.

And Pelosi knows it.

That’s why now, both the Pentagon and Pelosi are trying to cover up that very phone call.

However, Judicial Watch is all over the case — and they’re now suing to get their hands on that damning phone call.

House Speaker Nancy Pelosi’s January phone call with U.S. Army Gen. Mark Milley, chairman of the Joint Chiefs of Staff — in which Pelosi raised concerns about what she described as an ‘unhinged’ President Trump — is now the subject of a Freedom of Information Act (FOIA) lawsuit. Watchdog group Judicial Watch announced its legal action this week, saying the call between the House speaker and the nation’s top military officer – regarding the powers of a sitting president – set a “dangerous precedent” that could affect future presidencies. The group said its Jan. 11 request for information regarding the Jan. 8 call between Pelosi and Milley received no response from the Department of Defense. [Fox News]

Below is a tweet thread from Judicial Watch discussing the FOIA request in more detail:

BREAKING: Judicial Watch announced that it has filed a FOIA lawsuit against the DOD for records about House Speaker Nancy Pelosi’s January 8, 2021, telephone call with Chairman of the Joint Chiefs of Staff Mark Milley (1/3). https://t.co/yfWSaGIkNU

In addition, Nancy Pelosi foolishly documented her conversation with General Milley in a letter to her Democrat colleagues. Here’s some of what she said:

This morning, I spoke to the Chairman of the Joint Chiefs of Staff Mark Milley to discuss available precautions for preventing an unstable president from initiating military hostilities or accessing the launch codes and ordering a nuclear strike… The situation of this unhinged President could not be more dangerous, and we must do everything that we can to protect the American people from his unbalanced assault on our country and our democracy.

As you know, there is growing momentum around the invocation of the 25th Amendment, which would allow the Vice President and a majority of the Cabinet to remove the President for his incitement of insurrection and the danger he still poses… Yesterday, Leader Schumer and I placed a call with Vice President Pence, and we still hope to hear from him as soon as possible with a positive answer as to whether he and the Cabinet will honor their oath to the Constitution and the American people. [CNS News]

Based on Pelosi’s own description of the phone call in that letter, Judicial Watch President Tom Fitton is convinced that the Speaker of the House stepped way, way over the line.

Fitton said Pelosi has set a “dangerous precedent that could undermine the president’s role as commander in chief and the separation of powers.”

Indeed. However, what Pelosi did was even scarier and crazier than that. This woman tried to push the US military into taking “action” in a national domestic incident.

The only question now is — once her call is made public will Republicans pounce and use Pelosi’s power-crazed move to flip the false “insurrection narrative” on its ear, or will they let another golden opportunity to blow up the Dems’ narrative quietly slip away?