The Meme God That Failed: Suez Crash Was Not Caused by First Woman Captain From Egypt

Internet meme-lords took to social media the other day to carry out a devious internet prank after a gigantic, skyscraper-sized container ship ran aground in the Suez Canal, grinding international commerce to a screeching halt. Pranksters spread the rumor that the culprit was not a man, but a woman — specifically, Egypt’s first female ship captain Marwa Elselehdar.

As hilarious as that would have been, it turns out to be just a meme. Ms. Elselehdar appears to have not been involved at all.

The blockage of the Suez Canal has given anti-feminist internet trolls a chance to circulate fake news about Egypt’s first woman to have sailed as a ship’s captain.

Just hours after the Evergreen Marine Corp-operated, 20,388-teu Ever Given (built 2018) hit the canal bank on 23 March, anonymous trolls went to work falsifying a headline — purporting to be from regional English-language publication Arab News — about captain Marwa Elselehdar.

Unidentified users on Twitter and Instagram stole the Instagram portrait of Elselehdar plus material from a published 20 March write-up on Arab News detailing her role when leading the 1,386-dwt Aida IV (built 1992) through the expanded Suez Canal in 2015.

They used this to connect her falsely with the casualty of the Shoei Kisen-owned, Bernhard Schulte-managed Ever Given, under the mocked-up and social media-circulated headline “Cargo ship crashes into Suez Canal. First female Arab Lloyd captain involved in incident”.

But this headline is false in at least four ways.

There was never any such story on Arab News; the ship on which Elselehdar is now chief mate had no connection with the incident; she does not work for Hapag-Lloyd’s Arab Lloyd; and Arab Lloyd — the former United Arab Shipping Corp — is not a partner but a competitor of Evergreen. [TradeWinds]

The humor of the prank, however, derives from how the U.S. State Department, USAID and intelligence agencies have increasingly sought deep control over foreign nations’ civil societies through diplomacy on the basis of feminism, women’s empowerment and LGBTQ politics.

However talented Ms. Elselehdar may be as a ship captain, it is hard not to notice her status as a poster child of Globalist American Empire foreign aid meddling. Last October, at the height of the Covid pandemic, USAID “gave” $22.8 million of U.S. taxpayer dollars to Egypt for “women’s empowerment” programs, specifically in the Science and Technology spheres where Ms. Elselehdar received her education.

After her graduation, she joined the crew of the AIDA IV ship, with the rank of the second officer. Additionally, during the opening ceremony of the new Suez Canal, she applied to register as part of the crew that would lead the AIDA IV in the celebrations. Her request was accepted, and she led the AIDA IV as the youngest and first Egyptian female captain to cross the Suez Canal.

Remember all those foreign aid dollars from the “coronavirus stimulus” bill? That’s where they went. 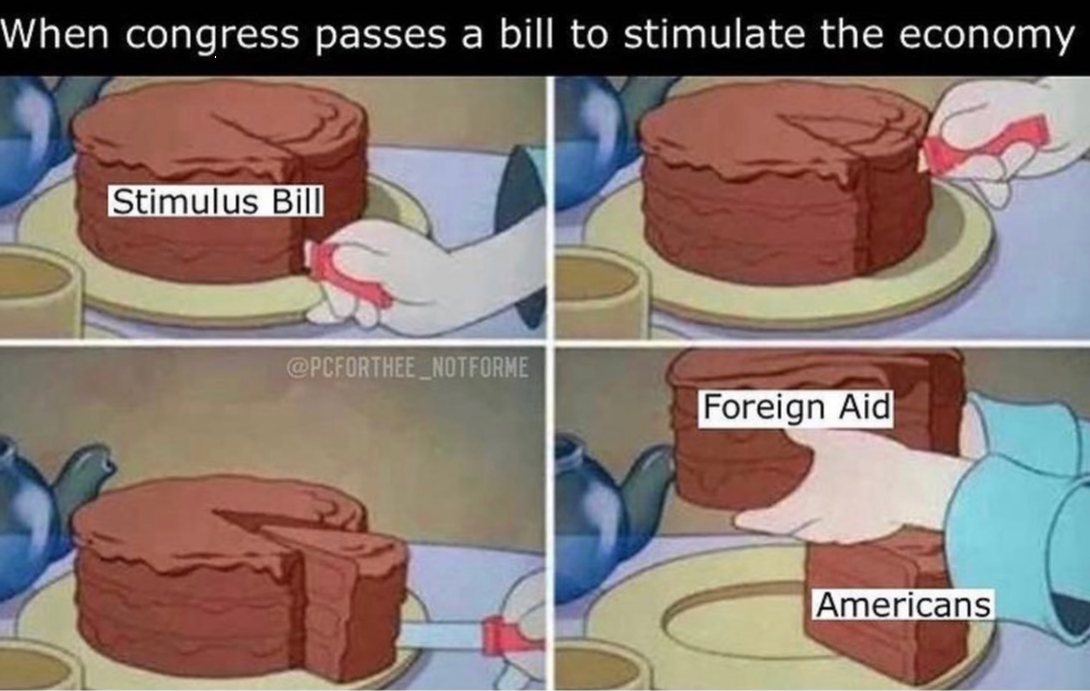 The USAID page on “Gender Equality and Women’s Empowerment in Egypt” is worth its own gander. 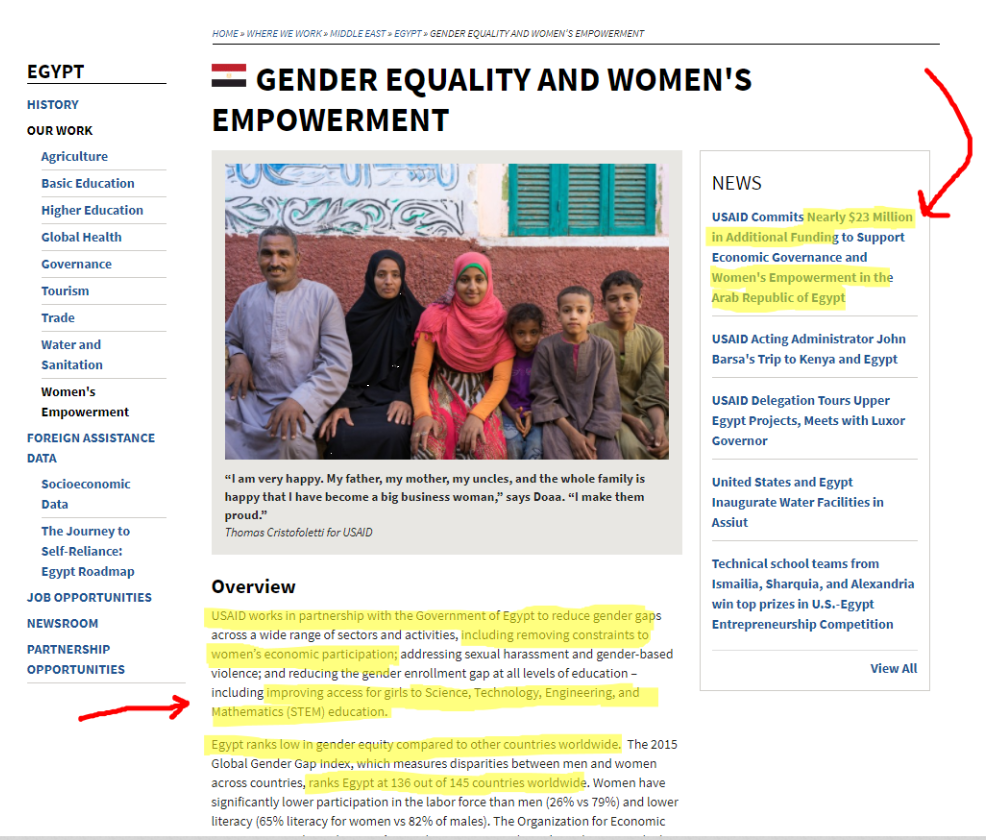 The Suez Canal is perhaps the most geostrategically important 300-meter wide stretch of waterway in the world.

The tiny canal handles 12 percent of all global trade every day. It sustained nearly the whole of European sea trade for the entire late 19th through 20th centuries. It was the key battleground of the North Africa campaign during both World War I and World War II. Its nationalization by Egypt in 1956 nearly caused World War III, and heralded the end of European empire.

The massive cargo ship currently blocking the canal is the size of the Empire State Building. 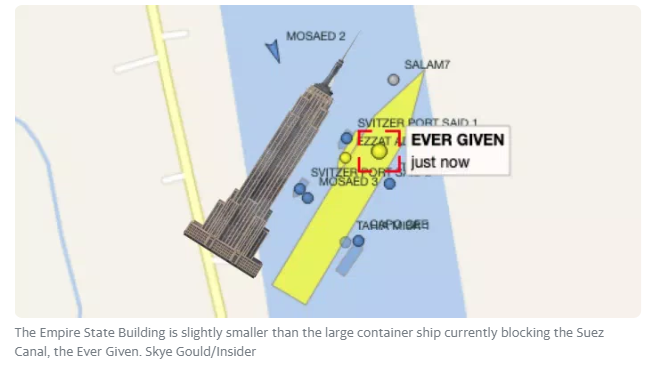 What would have previously been the equivalent of an Act of War is now just another Beached Whale on the embankment of Western ambition.

This is basically the heaviest man-made object on earth, and its captain managed to perfectly block the most important human passageway in the most Here’s-How-You-Die-In-Tetris way possible: 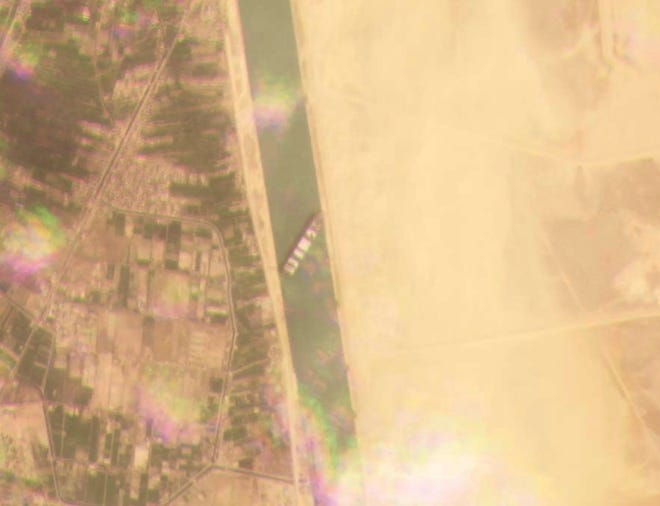 There are almost 165 ships backed up currently. Officials are trying to dislodge a floating skyscraper nearly a quarter-mile in length with tug boats. Every day the ship stays stucks costs roughly $9 billion in global trade. Even the “elite salvaging unit” tasked with unscrewing the ship costs a whopping $400 million an hour. After today’s dislodging mission failed, officials say it may take weeks to resolve this worst-case scenario for global shipping.

So if Egypt’s first female ship captain did not cause this wreck, what did cause the hulking Ever Given vessel to veer off and cause the first ever accidental ship wedging of the Suez Canal in its 150 year history?

It’s difficult to demonstrate just how drunk and incompetent the captain must have been without going through the tracking data itself. For starters, the ship didn’t just “get stuck.” 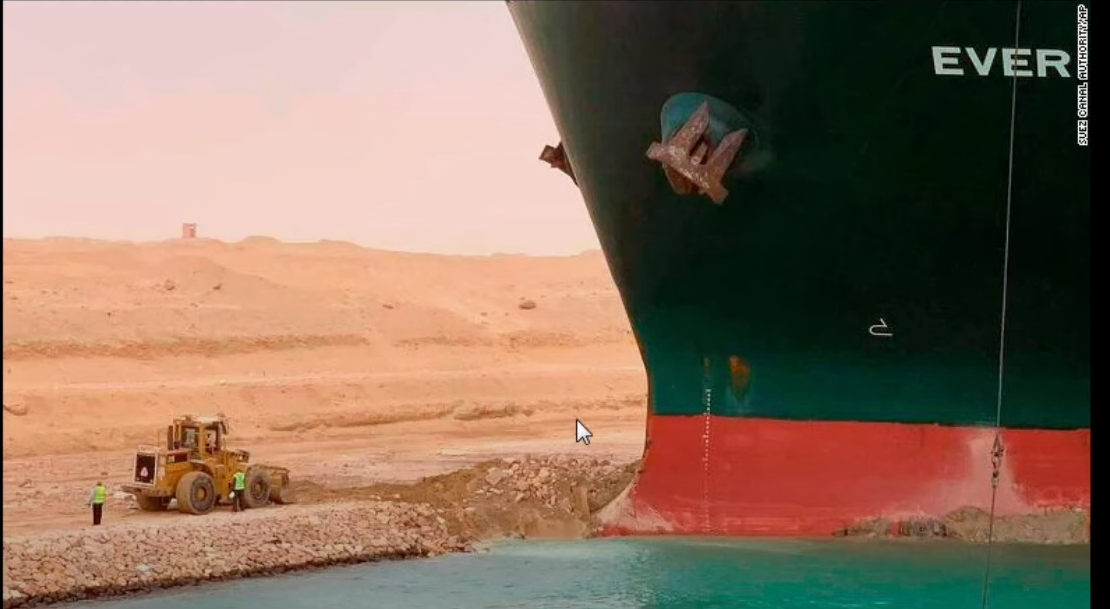 The captain clearly almost crashed the world’s biggest bumper car into the left side of the canal. 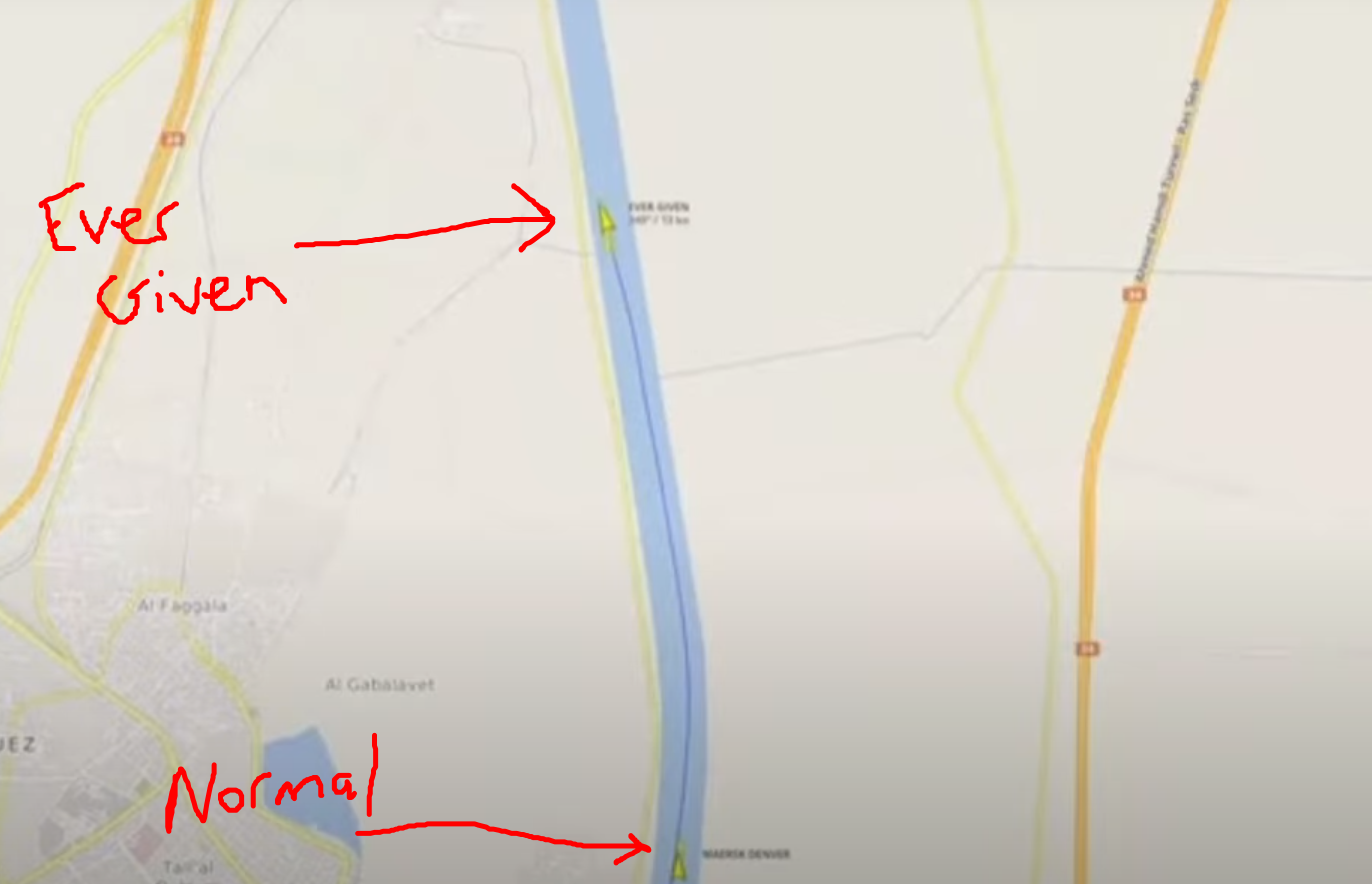 Before finally beaching it with a hard bank to the right. 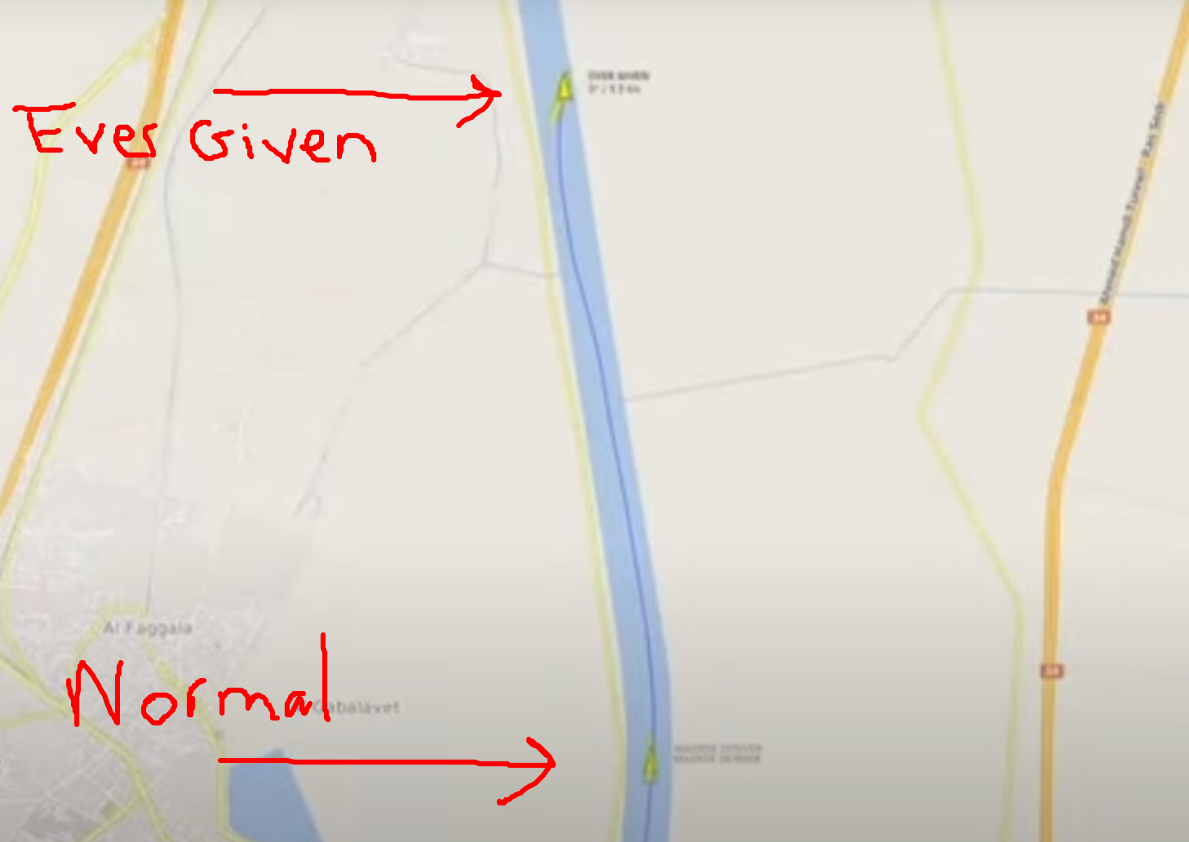 The resulting historic cargo ship pile-up clogging up the canal led Internet message boards to rename the Ever Given to the Zero F*cks Ever Given. 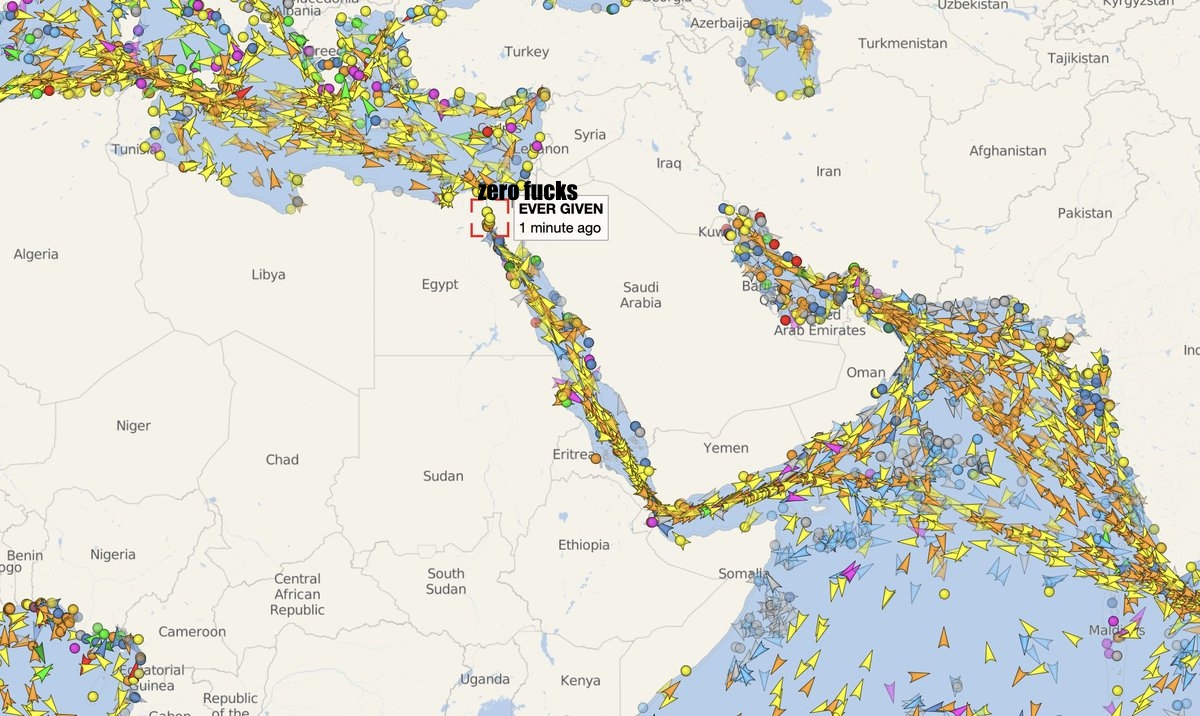 Naturally, the sheer size of this week’s Suez Canal shipwreck has spawned a thousand explanations for What Went Wrong. CNN quickly blamed the wind.

Cairo, Egypt (CNN) Eight tug boats are working to free a large container ship stuck in Egypt’s Suez Canal, halting marine traffic through one of the busiest and most important waterways in the world.

The rescue boats are working to float and release the Ever Given, a 59-meter-wide (193.5-feet) vessel that ran aground after 40-knot winds and a sandstorm caused low visibility and poor navigation, the Suez Canal Authority said in a statement Wednesday.

The 224,000-ton vessel, sailing under a Panama flag, was en route to the port of Rotterdam in the Netherlands when it was knocked off course. [CNN]

But 40 knots is just 46 miles per hour (MPH). That would be just an 8 out 12 on the Beaufort Wind Force Scale. (forces 13-17 are for genuine cyclones). A helpful animation shows how a force 8 is only two forces above “strong breeze” and two forces below an actual “storm”.

This is now the second episode in a week where “The Wind Played a Role” is the American media’s preferred response to inexplicable levels of incompetence. Recall how only last Friday, the American President’s path up the long, narrow stair canal of Air Force One was explained away by the New York Times with similar investigative rigor.

President Biden was “doing fine” after falling off balance while boarding Air Force One ahead of his Friday trip to Atlanta, according to a press secretary traveling with him.

For reference, the wind that evidently beached Biden was just 14 MPH.

Biden Spox: Yea, the wind!!! That’s it… the wind. The president is in tip top shape.

The Beaufort Scale would describe 14 MPH as a force 4 “Moderate Breeze.” That’s just one above force 3, also known as “Gentle Breeze.”

The incredulous “Wind Theory” fails to provide a satisfactory explanation for the rather odd shape the Ever Given tanker drew in the ocean shortly before its ill-fated crash. An apt description of that shape is best given by yesterday’s Vice headline: “A Cargo Ship Drew a Giant Dick Pic in the Ocean Then Got Stuck in the Suez Canal.”

Tracking info from VesselFinder showed, well, it’s easier to just see it yourself.

Again, this is the full journey shape. 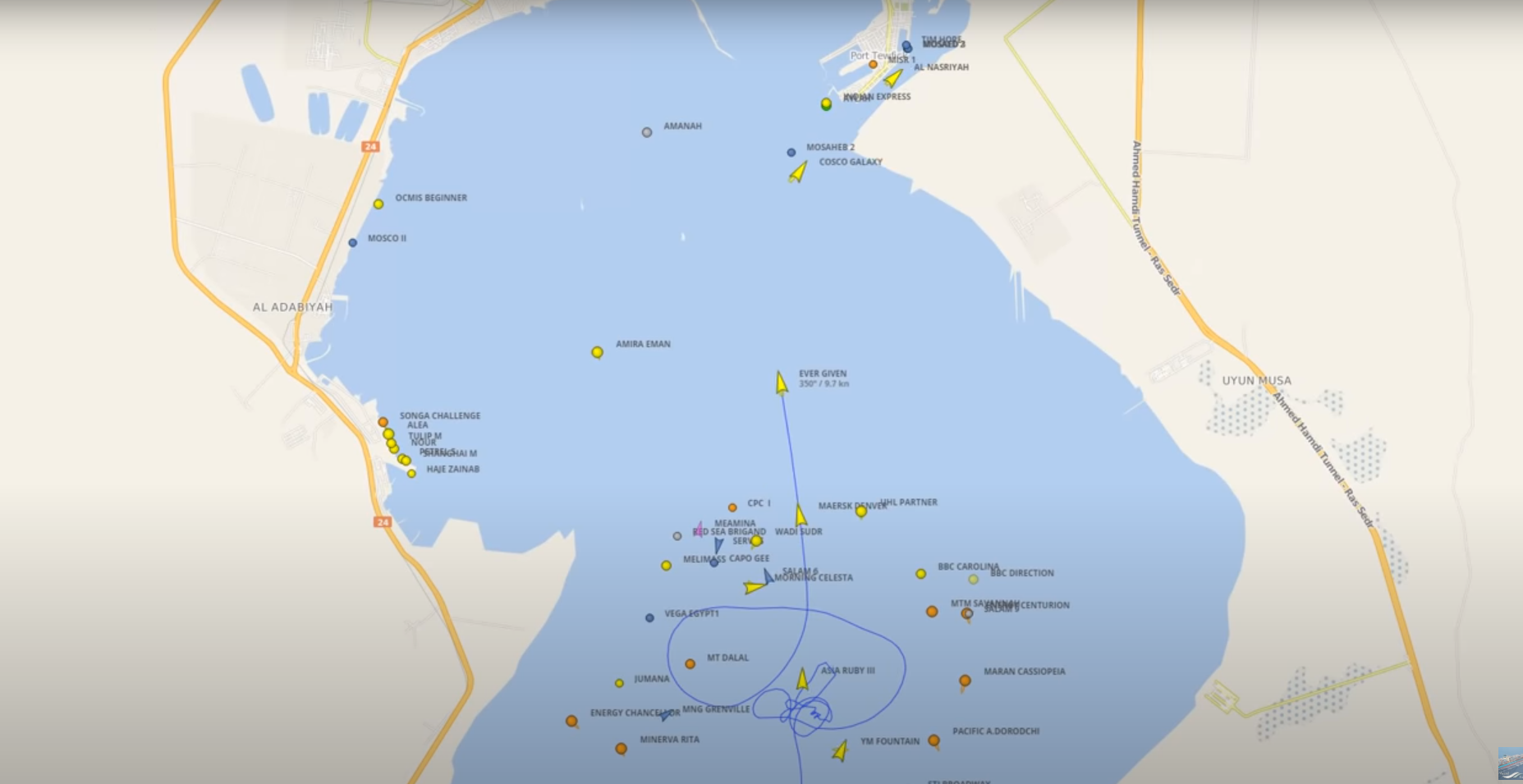 And immediately before entering the canal, the captain drew this precise, fully trackable shape into the sea with a skyscraper-sized vessel. 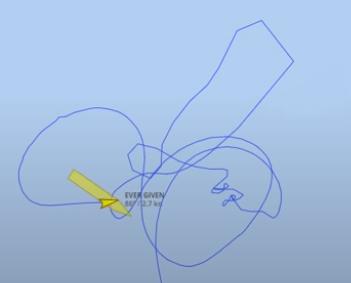 Either that’s a male phallus or a middle finger. Either way, it’s a symbolic sayonara to the proud legacy of Western infrastructure supremacy, as global power – and perhaps basic competence – shifts East.