“Our people have all left Drudge ... They like REVOLVER and others!”
President Donald J. Trump
“...many of Drudge's long-time readers have fled to Revolver News...”
Tucker Carlson, FOX News
Close No thanks, I don't want breaking news emailed to me
Mystery Surrounding Ashli Babbitt’s Shooter Deepens as Curious Details About “Capitol Police” Emerge 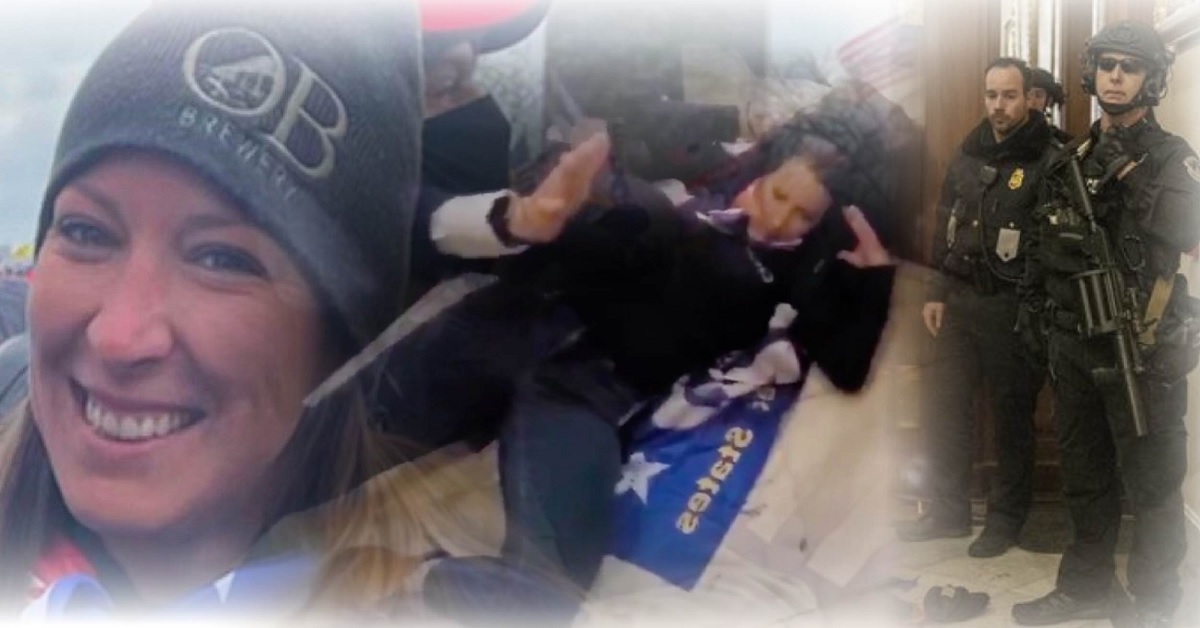 On January 6th, an unarmed 14-year vet and American patriot by the name of Ashli Babbitt was murdered inside the US Capitol.

Ashli was shot in the neck by a federal officer. The DC coroner listed the cause of death as a “homicide.”

And since that fateful day, Ashli’s murder has been shrouded in mystery.

Unlike other high-profile police incidents, like George Floyd and Daunte Wright, Ashli’s killer-cop has never been named. We have no idea who he is. All we officially know about this federal officer is that he will not be charged with Ashli’s murder.

During an investigation that appears to have been conducted under a cloak of extreme secrecy, it was determined there wasn’t “sufficient evidence to support criminal prosecution.”

From The Wall Street Journal:

The police officer who shot and killed Ashli Babbitt during the Jan. 6 riot at the U.S. Capitol won’t face federal criminal charges in connection with her death, the Justice Department said Wednesday.

“Based on that investigation, officials determined that there is insufficient evidence to support a criminal prosecution,” the Justice Department said in a statement announcing the closure of its probe.

It’s a baffling conclusion when you look at the criminal justice circus we’re watching unfold in Minneapolis with the Derek Chauvin trial. That officer is facing a murder charge involving a man who ingested enough Fentanyl to kill a herd of elephants.

Was this officer part of the Capitol Police force?

Well, the secrecy surrounding the case would suggest that yes perhaps he was, but we’re only speculating.

Everything is a mystery when it comes to the Capitol Police because they operate under a totally different set of rules.

Thanks to their buddies in Congress, the U.S. Capitol Police do not follow the same public reporting or transparency protocols that most other major police forces do.

For example, if someone is shot outside the Capitol by a DC police officer, the department is required by law to release the names of the officers involved in the shooting.

The Capitol Police force is not required to release the names of officers involved in any shooting, and most-often times they choose to withhold that information from the public.

Not to mention, Capitol Police are also under no obligation to respond to FOIA (Freedom of Information Act) requests.

The Capitol Police are part of the Legislative Branch and are not subject to the Freedom of Information Act. That means if a journalist or watchdog group asks for records on police misconduct or inspector general reports, they’ll come up empty because Capitol Police are not required under the law to comply.

Not very “transparent” policing, is it?

If the man who shot Ashli Babbit is not in fact a member of the Capitol Police, is it possible that authorities are studiously hiding his agency affiliation in order to avoid FOIA requests which don’t apply to Capitol Police but could for other agencies (say, the Secret Service).

Some more facts. Unlike most major police departments, Capitol police are not equipped with body cameras.

Honestly, it’s mind-boggling that Democrats are demanding a nation-wide discussion on police reform and transparency, yet the officers who are sworn to protect them have almost no transparency and no accountability whatsoever to the public who pay their salaries.

One can’t help but wonder if the lack of “transparency” within the Capitol Police force is not only about covering up questionable police activity, but also protecting the privacy of politicians. Just imagine what we’d find out about our sacred political figures if we had access to police reports and body cam footage from inside the Capitol?

Prior reporting on the Capitol Police does not exactly inspire confidence either. Even by government standards their historical incompetence is enough to give pause.

Capitol Police say that the commander of officers on the House side of the Capitol left his service weapon unattended in a bathroom where it was discovered by another officer.

A spokeswoman for the department told Roll Call that Lt. Mike Byrd will be investigated after his Glock-22, which has no manual safety to prevent unintended firing, was found “during a routine security sweep” by another officer in a bathroom on Monday.

Monday’s incident appears to be the first unattended service weapon involving Capitol Police reported since 2015, when the department faced a rash of similar incidents including on where an officer’s loaded weapon was found on a toilet seat cover holder.

In another case that same year, a young child found an unattended gun in the bathroom of then-Speaker John Boehner’s (R-Ohio) office. That incident too involved a weapon without a traditional safety mechanism preventing unintended firing. [The Hill]

The American taxpayers who fund this “police force” are left with a million unanswered questions, growing suspicion and a lack of trust in their government officials.

Who was this officer that killed Ashli? Is he part of the Capitol Police, or is he a member of another government agency?

If Democrats want to have a nation-wide talk about “law enforcement transparency and reform” then we need to start at the top with the Capitol Police. That way we can help make sure no other American citizen ends up like Ashli Babbitt, and that no other family is forced to go through this sort of hell on earth.