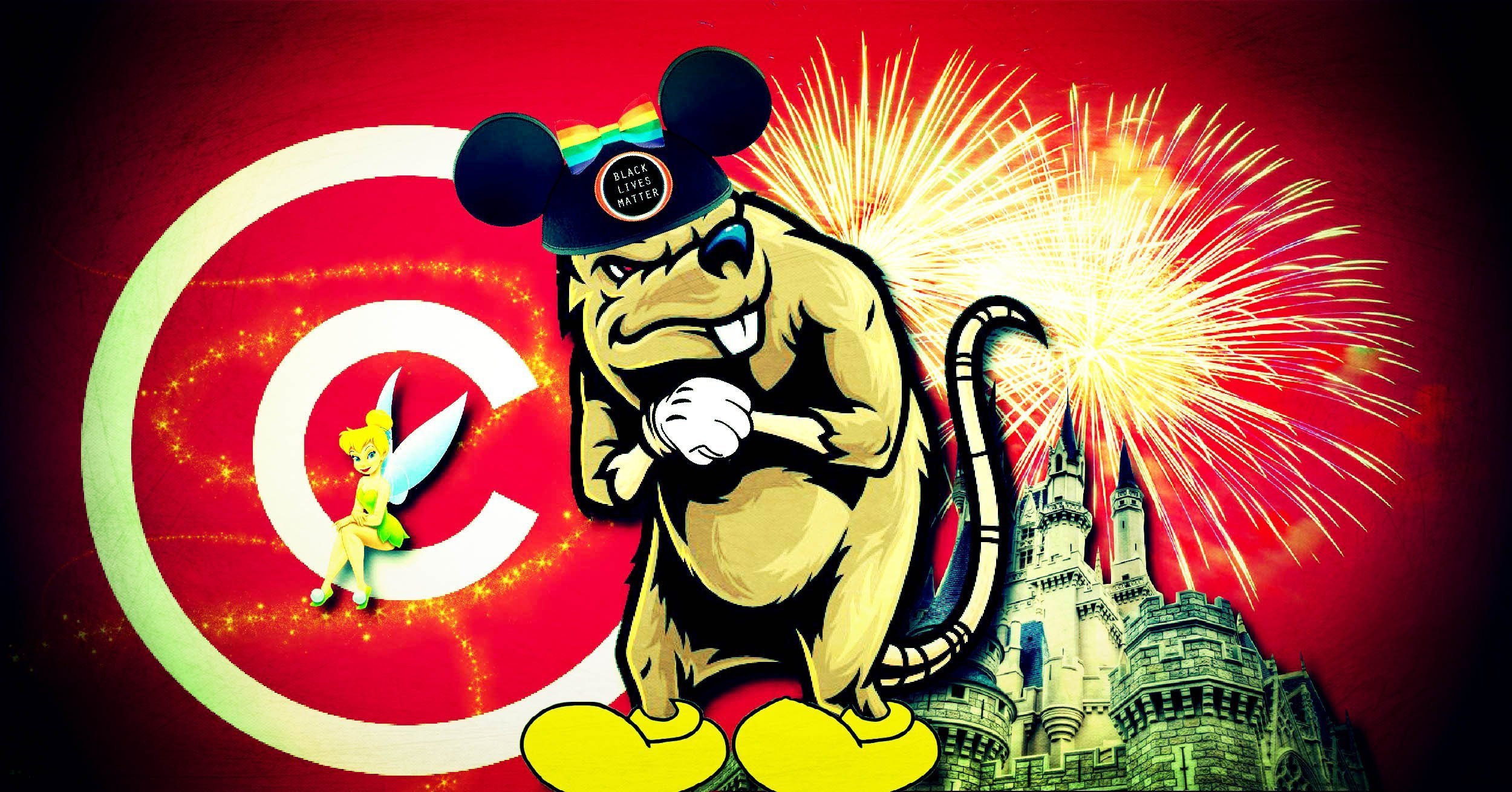 “Disney makes its money on Middle Americans who go to their theme parks, who buy their content and those people should know this corporation hates you,” the Manhattan Institute’s Christopher Rufo told Tucker Carlson recently. “It hates your culture, and it hates the color of your skin.”

Chris: "This corporation hates you, it hates your culture, and it hates the color of your skin." pic.twitter.com/fYRRT2hxE9

Disney laid off tens of thousands of workers due to the COVID-19 pandemic. As Rufo’s reporting exposed, despite those financial headwinds, the company still found a way to roll out a corporate diversity, inclusion, and equity program (commonly known by the acronym DEI, but deserving of the Freudian descriptor DIE, the fate reserved for the based in these programs, and straight white males in particular) featuring a Two Minutes Hate against white people and other race-and-sex-shaming content.

Disney’s new DIE program is not the first time the House of Mouse violated Middle America’s conscience. In 1997, the Southern Baptist Convention, the largest Protestant Christian denomination in the United States, called for a boycott of Disney. At the time, CNN reported the Convention’s objections “to Disney’s policy of giving health benefits to same-sex partners of employees, ‘Gay Days’ at theme parks, and the release by Disney and its subsidiaries of controversial books and films like ‘Pulp Fiction’ and ‘Kids.’”

Like many of the cultural right’s other projects over the years, the boycott failed at every level. Thankfully, to use Benjamin Franklin’s words, “God governs in the affairs of men.” Providentially, a GOP-controlled Congress’ previous coddling of Disney presents America First Republicans with a timely opportunity.

What comes to mind when you see the term “copyright law”? Maybe the blue FBI warning screen accompanying an old VHS cassette or perhaps the ill-fated file sharing service Napster and its similarly-doomed cousin Grokster. Probably not a cultural battlefield.

Copyright law predates the Founding. The Constitution grants Congress the power to “promote the Progress of Science”— i.e., knowledge — by giving authors “exclusive rights” with respect to their protected content, including articles, books, and music. Subject to the fair use defense, modern copyright law gives the copyright holder the exclusive right to reproduce, make derivative works of, and publicly perform the copyrighted content. Once copyright expires, the work passes into the public domain where the public can copy at will.

As the year 2000 approached, Disney had a problem. Copyrights on some of the company’s earliest cartoons, including “Steamboat Willie,” were set to expire soon. As one 1998 report put it, “[w]ithout copyright term extension, the company faces the potential nightmare of seeing its greatest treasures pass from corporate possession into the public domain.” Americans would be free to reproduce Disney’s public domain works, and even make new stories derived out of that content, without worrying about getting sued for copyright infringement. With “billions of dollars in revenue” at stake the report adds, Mickey Mouse went to Washington.

The story of how the Sonny Bono Copyright Extension Act, known within the copyright bar as the Mickey Mouse Protection Act, came to be is pure Swamp. In 1998, Disney Chairman Michael Eisner descended on Trent Lott’s office to ask the Senate Majority Leader for help. “He was very much interested in seeing the copyright bill,” Lott said at the time. As Congressional Quarterly reported, “[b]efore he left the spacious offices of the majority leader at the U.S. Capitol on June 9, Eisner was assured that his company’s pet bill would get the help it needed.”

In addition to Eisner’s visit, the company donated money to key committee leaders, including Republican Congressman Howard Coble of North Carolina, who was then the chairman of the House Judiciary Subcommittee on Arts and Intellectual Property. Disney also “paid $2,700” to host House Speaker Newt Gingrich and his wife “for three days at Disney Institute, the company’s educational facility in Orlando.”

When it was all over, Mickey Mouse had his way with the Republican-controlled Congress. With unanimous consent in the Senate and a voice vote in the House, Congress enacted the extension, tacking an additional twenty years onto existing copyright terms.

MAGA to Disney: Take a Hike

Fast forward to today. The extension Disney toiled for on Capitol Hill in 1998 is about to run out. As early as 2024, key Disney cartoons will pass into the public domain.  When the company came to Congress in 1998, it struck a decidedly neutral tone, however false those pretenses might have been at the time.

“Mickey Mouse is not a Republican or a Democrat,” a former Disney lobbyist once said. What Rufo’s reporting on Disney’s DIE program shows is that, if that were ever true in the first place, it is no longer the case. Now Mickey is a cartoon Gramsci and Adorno, an open critical theorist. MAGA Republicans must resist Disney’s inevitable call to further extend its copyright control over this entertainment from a bygone America.

Such opposition will no doubt roil Disney. Good. Disney is ashamed of much of this content anyway. The company now adorns old movies with warnings about “negative depictions and/or mistreatment of people or cultures.” Disney moralizes its audience in these warnings, informing them that “[t]hese stereotypes were wrong then and are wrong now.” Wait a second.  What’s this about moral truth for all time? It’s evidence of what Paul Gottfried has observed about the left in general: the woke aren’t “relativist” in any meaningful sense, rather they are about the business of tearing down anyone and anything that gets in their way.

Disney wants us to “learn from” this old content and “spark conversation to create a more inclusive future together.” If Disney wants “conversation,” there is no better way to do that than to get these works into the public domain, so Americans can freely engage with, modify, and improve upon them.

As with its DIE program, Disney is not really interested in conversation so much as it is controlling the terms of debate. The company used copyright law to bankrupt a service called VidAngel, which allowed families to stream censored, curated versions of Disney content. For its part, the useless Beltway Right, in the form of the American Conservative Union, lent its support of Disney, urging in a blog post now removed from ACU’s site, that the streaming service “operates in violation of the Ten Commandments: Thou Shalt Not Steal.”

One can already hear the handwringing over not giving Disney what it wants. For its part, the modern iteration of the Southern Baptist Convention is unlikely to pose any opposition to Disney’s woke agenda. Nowadays, Southern Baptist Convention President JD Greear says “God has not called us to save America.” (Let not your heart be troubled, Pastor Greear, who closed his church’s doors during the COVID-19 pandemic, apparently did hear the Lord calling him to encourage his flock to take to the streets in the aftermath of George Floyd’s death last summer.)

To self-identified evangelical and Never Trump conservative David French, Disney’s Marvel franchise, especially Avengers: Endgame, is not just entertainment, the films are one of the things French loves most about America.

Surely, David French conservatives will argue that we must extend copyright terms so Disney can enjoy the “blessings of liberty.”

David French to the New Yorker: “The fact that a person can get a room in a library and hold a Drag Queen Story Hour and get people to come? That’s one of the blessings of liberty.” [Pulpit and Pen]

But appeals to “thou shalt not steal,” like those which run before movies in the form of anti-piracy PSAs under the banner “you wouldn’t steal a car,” fail scrutiny in the case of Disney. At first blush, the fact that Hollywood, one of our nation’s primary purveyors of moral rot, invokes Mosaic law is sour irony.  It is also a modern-day fulfillment of Saint Paul’s observation that humans know God and his law, but “suppress the truth through unrighteousness.” America First conservatives should not listen to the voices of Beltway culture warriors or Never Trump evangelicals who supported and continue to support the Iraq War, but instead to what actual theologians have to say on the matter.

The trouble for the Never Trump faux Puritans of today is that copying public domain content isn’t theft.  Moreover, to indict someone of a moral failing for copying copyrighted content, one must overlook a rather significant detail: the copyist does not deprive the copyright owner of the content itself. The author of a book still has the book, even if another person copies it. To use the analogy from the Hollywood PSA, the car owner still has the car.

The translators who gave the world the Greek Septuagint, the scribes who copied the New Testament, the Irish monks who preserved various literary works after Rome collapsed — these people didn’t “steal” anything. The justification for copyright law, the entire constitutional basis for it, is that it exists to incentivize people to generate content for public benefit, not that the law of Nature’s God entitles authors to exclusive rights.

A Copyright Reform Agenda for MAGA

First, copyright terms should be tiered depending upon the relative size of the copyright owner. It is one thing for an individual artist or entrepreneur to use copyright to start a business or attract initial investment. It is another thing for highly-capitalized media conglomerates to profit from the system for decades and to use copyrights to prevent competition.

Second, copyright protection should be tailored based on the type of content. In Slouching Towards Gomorrah, Robert Bork called for outright censorship of society’s most abhorrent content. “The very fact that we have gone from Elvis to Snoop Doggy Dogg,” Judge Bork observed, “is the heart of the case for censorship.”

Setting aside the censorship question, Bork’s critique of popular culture raises interesting copyright issues. Again, if copyright exists as, in the Supreme Court’s words, an “engine of free expression,” in what universe does Cardi B’s “WAP” deserve the same level of protection as Booker T. Washington’s Up From Slavery? Isn’t it obvious we should incentivize the creation of the latter as opposed to the former?

Third, related to the second, Republicans should strip the pornography industry of copyright protection entirely. Copyright for smut is arguably unconstitutional anyway, as pornography does not promote the progress of “knowledge” in any way the Framers’ intended. Republicans should end any doubt on the question.

Fourth, the GOP should strengthen fair use and free speech. In this regard, copyright law’s privileging of parody over satire deserves rethinking. Why is 2 Live Crew’s rewrite of Roy Orbison’s “Oh, Pretty Woman” fair use, but a meme featuring Pepe the Frog is not? Republicans should take up the mantle of free speech and prevent content creators from using copyright law to stifle First Amendment rights.

Finally, and distantly related to Disney, but directly related to the propagation of swill and lies online, Congress needs to substantially revise the Section 230 of the Communications Decency Act to strip away protection from content providers who in any way moderate or manipulate the publication or preference of political, policy or religious speech on their platforms.

E.C. Knight is an attorney in middle America.