“Our people have all left Drudge ... They like REVOLVER and others!”
President Donald J. Trump
“...many of Drudge's long-time readers have fled to Revolver News...”
Tucker Carlson, FOX News
Close No thanks, I don't want breaking news emailed to me
Noor Bin Ladin Reflects on Osama’s Death and Biden’s America, Where Patriots Are the New “Terrorists”

← Front page / Exclusive
Noor Bin Ladin Reflects on Osama’s Death and Biden’s America, Where Patriots Are the New “Terrorists”
May 2, 2021 (1y ago) 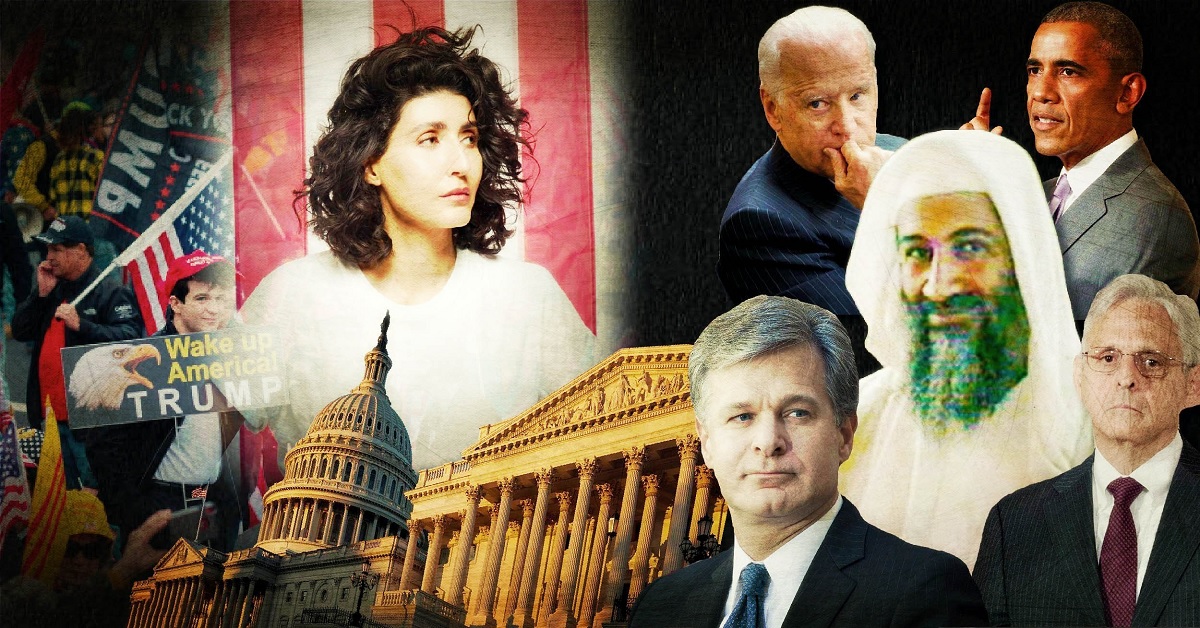 Ten years ago on this day, the world watched as Barack Obama officially announced the killing of Osama Bin Laden.

It took a decade, but the most notorious terrorist in modern history had finally met his fate. The Free World could finally breathe a sigh of relief.

At the time, my immediate thoughts went out to the victims of 9/11. I had hoped that this moment could provide solace — however little — and some form of closure to those directly impacted by this tragedy.

This sentiment turned into concern soon afterwards, when both the lack of communication by the Obama Administration and the operation itself turned out to raise more questions than they answered for many victims — questions for which I hope they will one day receive answers.

For the sake of clarity and those who might be curious, the news did not affect me personally. I never met Osama bin Laden, I was never in contact with Osama bin Laden, and I had absolutely nothing in common with him.

Or so I thought.

Recently I stumbled upon the CIA’s released listing of English books seized in Osama bin Laden’s Abbottabad compound. Surprisingly, I discovered I had researched some of the very same contentious topics — such as the Federal Reserve’s founding, the Committee of 300, and even Project MK Ultra. Incredibly, also on his shelf was a book on electronic voting machines and their proneness to fraud.

Of course, our motivations to understand the inner workings of America’s Deep State were diametrically opposed. While his were born of his hatred of America, mine are spurred by my love for that great nation and admiration for the American Experiment. Freedom, I had realized very young, was not to be taken for granted — and neither should the Founding Fathers’ monumental achievement in conceiving the freest, most just form of society to this day.

This is why I am heartbroken by the state in which America finds herself today, with her foundational values besmirched and her sovereignty almost fully usurped by her treasonous ruling class.

As I have previously written, this planned demolition from within has spanned decades; the 21st century merely heralded the final stages of the nation’s transformation from a constitutional republic to the globalist system we see emerging today.

September 11th shook our world to the core. Aside from being devastated, like many of us I was terrified of another atrocious attack. I thought that the very real danger of Islamic terrorism, with these cells having been allowed to fester in the West for years, justified the immediate implementation of protective measures.

Barring a few prescient voices warning of the threat it would pose to Americans’ Fourth Amendment rights, support for the Patriot Act was overwhelming and thus was set in motion the unprecedented growth of the national security apparatus. The Department of Homeland Security (DHS) was swiftly created, the Foreign Intelligence Surveillance Act (FISA) was expanded, the National Security Agency (NSA) and other intel agencies were given more reach — all in the promise that it would help prevent future attacks.

Two decades on, it’s painfully obvious that those who had sounded the alarm were right: the very measures enacted to protect Americans from foreign threats are now being used to terrorize them if they dare question their rulers’ legitimacy.

In conjunction with a politicized, two-tiered justice system, victims of egregious infringements by their own government have very little to no recourse under the law, and face a grueling process to try and get these injustices rectified.

While the past five years gave us countless examples of such cases, the current treatment of the so-called Capitol ‘insurrectionists’ of January 6 perfectly illustrates the current Regime’s modus operandi in its treatment of ‘dissidents.’

If you are a regular Revolver reader, you know that no insurrection took place on that day, despite all the Regime Media’s best efforts to convince us otherwise. Indeed, since I first wrote about my take on events shortly thereafter, Revolver’s investigative team has unraveled one manufactured aspect of the narrative after another, through a series of meticulous articles providing incontrovertible proof that 1/6 is yet another media hoax.

From the fallacy that five people died at the hands of violent Trump protestors (none did), to the claim that it was an ‘armed insurrection’ (it wasn’t), it turns out that 1/6 was in fact a largely peaceful protest, with a number of infiltrators tasked with creating a chaotic scene for the cameras. The framing did the rest.

The objective behind this entire production is clear: impeach President Trump and justify the persecution of anyone who dares question the result of the 2020 elections.

While the ‘insurrection’ is fake, the consequences protesters face are very real. Roughly 400 people have been arrested since 1/6, with many still currently held in jail, including in solitary confinement. This is in keeping with Federal prosecutor Michael Sherwin’s shock and awe plan of speedy, mass arrests irrespective of evidence, to deter future protests.

Since that day, the regime has waged an unabashed attack on the character of Trump supporters, labeling them as domestic terrorists, extremists or white supremacists.

From a DHS statement issued earlier this week…

…to Joe Biden’s remarks in his address on Wednesday:

“We won’t ignore what our intelligence agencies have determined to be the most lethal terrorist threat to our homeland today: White supremacy is terrorism.”

In the same breath, Biden even equated Americans  to Al Qaeda and ISIS terrorists, and called January 6 the “worst attack on America’s democracy since the Civil War.”

That Biden would compare the non-event of 1/6 to 9/11 and compare Americans to some of the worst barbarians on Earth is despicable, and a slap in the face to all those who have suffered from real terror attacks.

These shameful and defamatory words are meant to serve one purpose — to justify the Regime’s increased assault on Americans’ civil liberties.

Just this week, FISA abuses by the FBI  have been confirmed as common place, and we learned that even the US Post Office spies on citizens’ social media posts.

In a dramatic escalation that should terrify every American, Federal authorities placed conservative activist Nick Fuentes the No-Fly List. And several others, including congressional candidate Laura Loomer, are being denied their constitutional rights.

READ MORE: Feds Just Launched An Official “Test Run” — Conservative Activist Placed On “No Fly List”… Could You Be Next?

Meanwhile, it is worth noting that actual terrorists, whether Islamic or garden variety Cartel killers, simply and easily make their way into the United States via its notoriously porous Southern border. Any good faith attempt to correct this glaring security hole is of course met with cries of racism, xenophobia, and Islamophobia by the very same people who have no compunction labeling large swathes of the American population as white supremacists.

Who would have ever imagined that upstanding US citizens would be treated less fairly than Islamists in America?

I’m dumbfounded watching this unfold, and can’t help but think Bin Laden would be elated.

A strange twist of fate is revealed by documents found in Bin Laden’s Abbottabad compound showing an assassination plot to kill Barack Obama. The specific intention was to weaken America by having Joe Biden ascend to the presidency:

When American special operations forces raided Bin Laden’s compound in 2011, on Obama’s orders, they found a trove of computer files. The Office of the Director of National Intelligence translated and published the last of that material in 2017. Among the many memos was one where bin Laden called for the assassination of Obama.

“Obama is the head of infidelity, and killing him automatically will make Biden take over the presidency,” bin Laden wrote, according to a 2012 Washington Post article. “Biden is totally unprepared for that post, which will lead the U.S. into a crisis.” [Austin American Statesman]

Osama bin Laden got his wish. But what he and all of America’s other foes fail to understand is that despite all their attempts to destroy her, America will prevail.

Whether foreign or domestic, her enemies don’t stand a chance in the face of American Patriotism and Courage. Love of Freedom, God and Country is more powerful than the conniving, evil designs of the globalist ruling class.

Americans know their rights, and that these are indeed God-given. Americans will not give up their rights, because they know these inalienable God-given rights are not theirs to give.

This righteous defiance is of course precisely why these patriots are being persecuted: they present the greatest obstacle to the Regime’s hegemony, and thus must be neutralized by any means necessary. Resistance to tyranny is “terrorism” in the eyes of America’s would-be tyrants.

As dark as these times are, and while we are unsure how much longer they will last, one thing I do know is that this Regime will fall as the truth of its machinations continues to be revealed.

Noor bin Ladin is a writer living in Switzerland. She is an unapologetic Trump supporter and loves America and its people. Read more at her website.