A new book coming out reveals exactly what Barack Obama really thought of the press and the public. And in the process, it reveals something else: The American government was never more honest and transparent than it was under President Trump.

The book in question is “Battle for the Soul: Inside the Democrats’ Campaign to Defeat Trump,” and excerpts are already circulating online:

Obama made the comment near the end of the year, after the Obama Foundation’s holiday party in Chicago, the book said. He and his staff were winding down after the event, and they were picking his brain about the latest hurdles the Democratic Party was facing as well as other episodes he was writing about for his memoir, which was released earlier this year.

Obama secretly hating half the American public is perhaps no surprise. But the new book also reveals Obama’s contempt for the mostly-fawning professional press.

Former President Barack Obama, normally reserved and measured in his signature speaking cadence, reportedly got real with a prospective presidential candidate during a sitdown ahead of the 2020 Democratic primary.

According to The Atlantic’s Edward-Isaac Dovere … Obama vented about political reporters and how they covered him.

“Motherf—ers, I’m aloof with you because I don’t want to talk to you,” Obama said, according to Dovere. [Business Insider]

And while Obama was relatively restrained toward President Trump during the transition and afterwards, in private he spoke very differently.

“He’s a madman,” Obama once said of him. “I didn’t think it would be this bad.” In another instance, he said, “I didn’t think we’d have a racist, sexist pig.” Other times, he would send emails to aides containing links to articles with the line, “Can you believe this?” He also referred to Trump as a “f—ing lunatic” and called him a “corrupt motherf—er” when it surfaced that Trump sometimes had phone calls with foreign leaders without any aides listening in.

It would be low-hanging fruit to complain about Obama trashing half the American public as “racist motherf***ers” for opposing him. But we won’t. Who hasn’t said nasty things about their opponents, political or otherwise?

No, what is gross about Obama’s behavior is the two-faced, fake diplomacy of it all. What Dovere’s book reveals is that Obama’s public persona was a fraud, a mask worn for political gain. Another article about the upcoming book describes Obama as “known for his affable nature,” yet this is transparently false. If one’s public demeanor is the total opposite of what one says in private, it isn’t “affability,” but calculated manipulation.

This manipulation is so routine that many Americans simply take it for granted that politicians are perpetually bullshitting them. They debate amongst themselves what the “real” beliefs of George W. Bush, Hillary Clinton, or Andrew Cuomo are, beneath the slick veneer of decades of polished dishonesty. Every speech, every ad, and every initiative by the typical politicians is framed in terms of “optics,” because treating them as representative of the politicians’ actual worldview and innermost beliefs would be absurd.

But it doesn’t have to be that way, and President Trump proves it. Whatever else one thinks of Trump, he was man enough to say the same things in public (or on Twitter) that he said to his closest advisors.

If Donald Trump thought Barack Obama was a “f***ing lunatic,” then he’d go on Twitter and say so. He’d do the same for other Republicans, members of the press, and even his own Cabinet members. 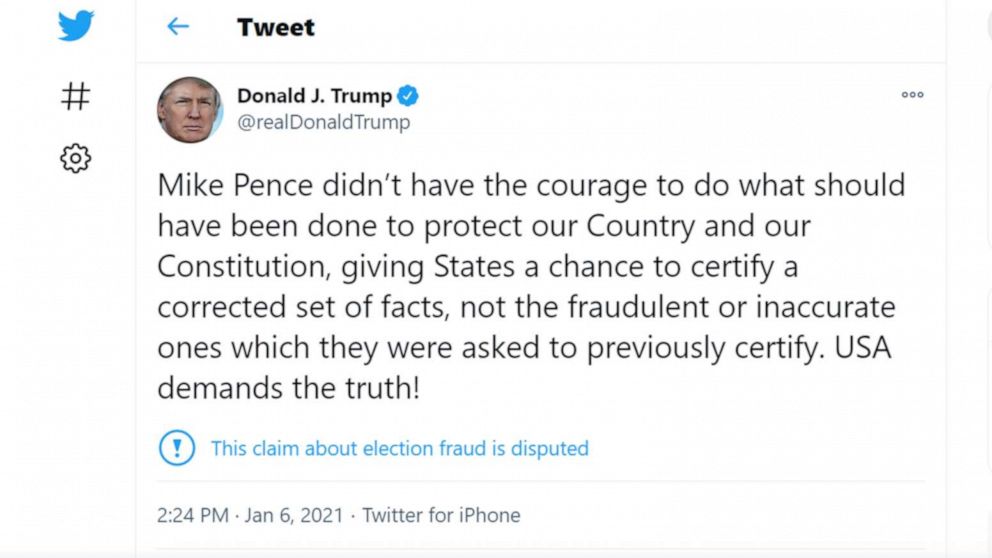 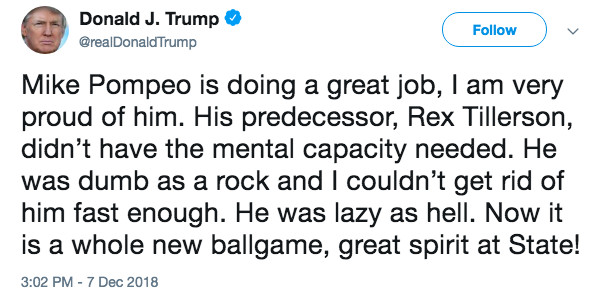 If President Trump was displeased with someone, be they enemy or (supposed) ally, everyone found out right away. They didn’t have to wait for a scummy tell-all book to come out three years later to find out what the president really was thinking. But this wasn’t just about Trump’s personal spats. Trump was also refreshingly honest about actual policy matters. When the press demanded that America punish Saudi Arabia for the death of Jamal Khashoggi, Trump’s response was forthright: Saudi Arabia was too useful to ditch as an ally.

After the United States, Saudi Arabia is the largest oil producing nation in the world. They have worked closely with us and have been very responsive to my requests to keeping oil prices at reasonable levels – so important for the world. As President of the United States I intend to ensure that, in a very dangerous world, America is pursuing its national interests and vigorously contesting countries that wish to do us harm. Very simply it is called America First! [Vox]

With a system-backed politician like Obama (or pretty much anyone else running for office prior to 2016), you got two-faced, shallow “diplomatic” language, the fake discourse of press releases and daytime television. With a real people-backed leader like Donald Trump, what you see is what you get.

At heart, this is why Donald Trump resonated with the American people from the moment he descended the escalator in June 2015. Whatever his coarseness, nobody believed President Trump’s words were anything but genuine. Trump didn’t show up at the Al Smith Dinner or the White House Correspondents Dinner and kiss up to reporters and insiders he secretly hated. He just said he despised them and avoided their events.

As Tucker Carlson pointed out in 2019, the Globalist American Empire’s shrieks that Trump was a “liar” were projection and the complete opposite of reality. What made Trump so much more upsetting to them than prior Republican politicians was his fundamental honest about his own views and the policy of America.

Think back over the last four years: When have the CNN anchors been the angriest? Was it when Trump told some whopper, or exaggerated his own accomplishments? Nope. They’re used to that kind of lying. Everyone who spends time around politicians is used to it. What infuriates official Washington is not when Trump lies — it’s when he tells the truth. Truth is the real threat to their power.

There’s an unspoken agreement among the people in charge of our country not to talk about what’s happened to it. They are personally implicated in its decline, for one thing. Often, they are profiting from it. The last thing they want is a national conversation about what went wrong. And so they maintain an increasingly strict policy of mandatory reality-avoidance: ‘Everything’s fine,’ they shout, voices rising in hysteria. ‘Diversity is our strength. Shut up, or we’ll hurt you.’ But Trump won’t shut up. He keeps talking. That’s his crime. That’s why they hate him. [Breitbart]

We will never have more transparency in American government than we had under Trump. In fact, Trump’s transparency was so powerful that it elevated even his enemies. The Globalist American Empire, which thrives on lies and propaganda, was forced to rip off its mask and show its true face in its insane zeal to destroy Trump.

But there is a greater lesson here than simply Trump being more transparent than his enemies, and therefore better. Sadly, while this honesty is what made Trump so exceptional as a leader, it also may have been his fatal flaw. Everything about Trump was public. Often, this was necessary; sometimes only public pressure was sufficient to bring the president’s own treacherous aides, officials, and Congressional “allies” in line. But even policies that could easily have been done quietly were often blasted out to the entire world on Twitter. By being an open book instead of a closed-door Machiavelli-Kissingerian schemer, Trump’s political opponents could capitalize thoroughly on his every move.

Ironically, as a candidate, Trump observed this hazard directly while speaking about the transparency of U.S. military strategy overseas.

“General MacArthur and General Patton would be in a state of shock if they were alive today to see the way President Obama and Hillary Clinton try to recklessly announce their every move before it happens — like they did in Iraq — so that the enemy can prepare and adapt,” Trump said in 2016.

It’s a lesson he failed to heed for a far more important war than Iraq or Afghanistan: The one happening on the home front.

We’re not saying that Trump should have simply been like Obama, Bush, and all the rest. Rather, we’re saying that a golden mean exists somewhere between the two (and closer to Trump).

The fact that the Globalist American Empire was able to remove Trump from power isn’t proof that being shady and dishonest is the ideal mode of governance. The radical fakeness and dishonesty of the ruling class is actually counter-productive, even for their sinister ends. More and more of the public is learning not to trust them. This lack of trust is the strongest fuel in the crisis of legitimacy that is causing the Globalist American Empire to crumble and lash out. The blatant deception of the average leading Republican is what allowed Donald Trump to so instantly stand out in 2015.

On the flipside, though, simply being open about everything couldn’t get the Trump movement over the hump. Any winning ideology needs a “ground game,” a mass of rank and file actors who make sure the agenda is done even when the leader’s attention is elsewhere. In America, we’ve learned to call this the Deep State, and patriotic Americans are understandably deeply suspicious of it.

But the biggest problem with the Deep State isn’t that it operates under-the-radar most of the time. The problem with the Deep State is that it works on behalf of a corrupt ruling class and is hostile to the American people. A pro-American “deep state” would be a huge force multiplier for Americans. It would allow far more to be accomplished in a single presidential term, and it would make those accomplishments harder to undo after a political setback.

There’s another problem with being fully forthright as well: The Globalist American Empire is now naked in its use of censorship and speech suppression to crush dissident views. Once they banned President Trump from Twitter, Facebook, and even his email list, Trump’s ability to communication with the masses was badly crippled. Going forward then, political success will sometimes rely on taking political action without attracting the laser-like destructive focus of the Globalist American Empire’s tech auxiliaries.

We’re happy that President Trump brought badly-needed transparency to the Globalist American Empire. But his successor, or Trump himself should he run again in 2024, will need more than personal openness. He’ll need the human infrastructure that can sustain an internal governing strategy as well as a public-facing one. And by its very nature, this isn’t something any one politician can build. For the next three years, it is the job of the America First movement to ensure that when the White House is retaken, there is a real governing elite ready to step into place and work behind the scenes to provide the real, effective leadership the American people deserve