Even Worse Than Dilapidated Airports: Our Nation’s Theme Parks Are The Real Dystopian American Vision

Last week, a Revolver essay made a strong case that airports are the ultimate, hellish symbol of modern America. And they are a worthy contender. But they aren’t the best one. No, the most visceral, immediate way to witness the decay of 2021 America is to set foot into a popular amusement park. From Disney World and Universal Studios to Cedar Point and Six Flags, America’s theme parks may offer charm and exciting thrill rides, but they also offer a stark dystopian vision of how far America is from the great country it once was.

Sure, there are a lot of fat people in airports. But to stroll through a contemporary American theme park is to witness a blob of humanity in all its greasy, engorged, jiggling horror. 35+ BMI humans waddle about, gorging on funnel cakes, shaved ice, and the bespoke ice cream confabulations that are the typical fare of theme parks. Syrup and sugar coat the face, stick to the fingers, clog the arteries, and bloat the waistline.

In airports, the obese masses at least benefit from air conditioning, but in a theme park on a glorious summer day, their bodies will be coated in a generous lather of sweat, which will soak through their shorts and T-shirts, making them resemble wrappers at the fast food outlets they eat at 2-14 times a week.

Sadly, more than ten percent of Americans have diabetes. Sometimes that figure is hard to believe, but a quick trip to Kings Dominion will immediately convince anyone that ten percent is, if anything, an underestimate.

Airports are sterile, boring places. If they’re uninspired, they at least don’t drive home the way America has been gutted by the left’s cultural Maoism. There aren’t many statues to rip down (though exceptions exist), and only a handful are named after American heroes now targeted for cancellation, like Charles Lindbergh or John Wayne.

No such luck at theme parks, which offer a grim, visceral reminder of America’s cultural implosion. For decades, tens of millions of visitors from around the world enjoyed Disney’s Splash Mountain ride, whose theme was based on animated sequences from the 1946 film Song of the South. 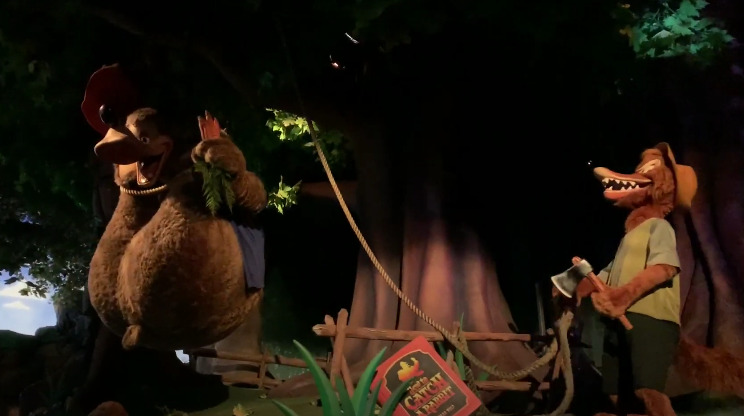 No more! The woke battalions have decreed that the theming is racist, and so the ride is getting the 1619 Project treatment. The Song of the South music and characters will be scrapped, and replaced by new themting from the inferior modern Disney film The Princess and the Frog.

And the cultural obliteration doesn’t end with the ride:

[W]hile the actual overhaul of Splash Mountain is likely years away, it seems that both resorts have begun to take steps to remove other Song of the South references from other parts of the parks.

First, it was reported by the OC Register that the music loop at Downtown Disney, the one part of Disneyland Resort that is currently open, had removed “Zip-A-Dee-Do-Dah” from the playlist. Now, BlogMickey has reported that The Zip-A-Dee-Doo-Dah Day, a game available to play in the Disney Play app at Walt Disney World, has been removed from the app, and even the Disney Parks Blog post announcing the game’s existence has been removed from the web. [CinemaBlend]

Walt Disney was an all-time great American, whose creations were genuine works of art that brought joy to the entire world. Now, right in front of everyone, those works are being thrown into the garbage to appease a Maoist mob.

It’s not just at Disney parks, either. Universal has announced that it is “evaluating” Seuss Landing at its Islands of Adventure theme park in Orlando.

The Florida theme park has a Seuss Landing area called “If I Ran the Zoo,” which is the title of one of the books yanked on Tuesday. It also has a gift shop called the Mulberry Street Store as well as a Mulberry Street sign, both nods to another of the six pulled titles, “And to Think That I Saw It on Mulberry Street.” “Seuss Landing continues to be very popular with our guests and we value our relationship with Seuss Enterprises,” a Universal spokesperson told News 13 in a statement. But, “we’ve removed the books from our shelves as they have asked and we’ll be evaluating our in-park experience too,” the company said. [NY Post]

Almost every theme park in America trades on childhood nostalgia. But in 2021 America, that nostalgia can and will be rewritten at any time.

As any miserable member of the decaying American middle class knows, everything of real importance in their overcrowded, declining country costs more. Single-family homes, university degrees, childcare, and health insurance have all surged in price. Often, as the price has exploded, quality has fallen. A college degree is essential for most career paths, yet actual colleges teach less than ever, and entire fields like English and anthropology have become embarrassing jokes. In cities like San Francisco, enormously expensive housing is paired with the need to pay for a private school to avoid a calamitous public system. For millions of Americans, the struggle to maintain the middle class trappings they grew up with has become a path to financial destruction.

One of the few goods that has grown in price as quickly as the accoutrements of a middle-class life is a ticket to a Disney theme park. In 1955, a single-day ticket to Disneyland could be had for $1. That’s not a misprint. Sixty-five years ago, it cost only a single dollar (less than $10 today, even after inflation) to get into Disneyland. That doesn’t tell the whole story (visitors also had to buy tickets for individual attractions), but it is inescapably true that visiting a Disney theme park a half-century ago was economical for any middle class family. Even as recently as 2000, a day pass for Disneyland was $43. But just like the cost of attending a southern California college, the price of a Disneyland ticket has grown at three times the rate of inflation, and by last year a single day pass was more than $150. 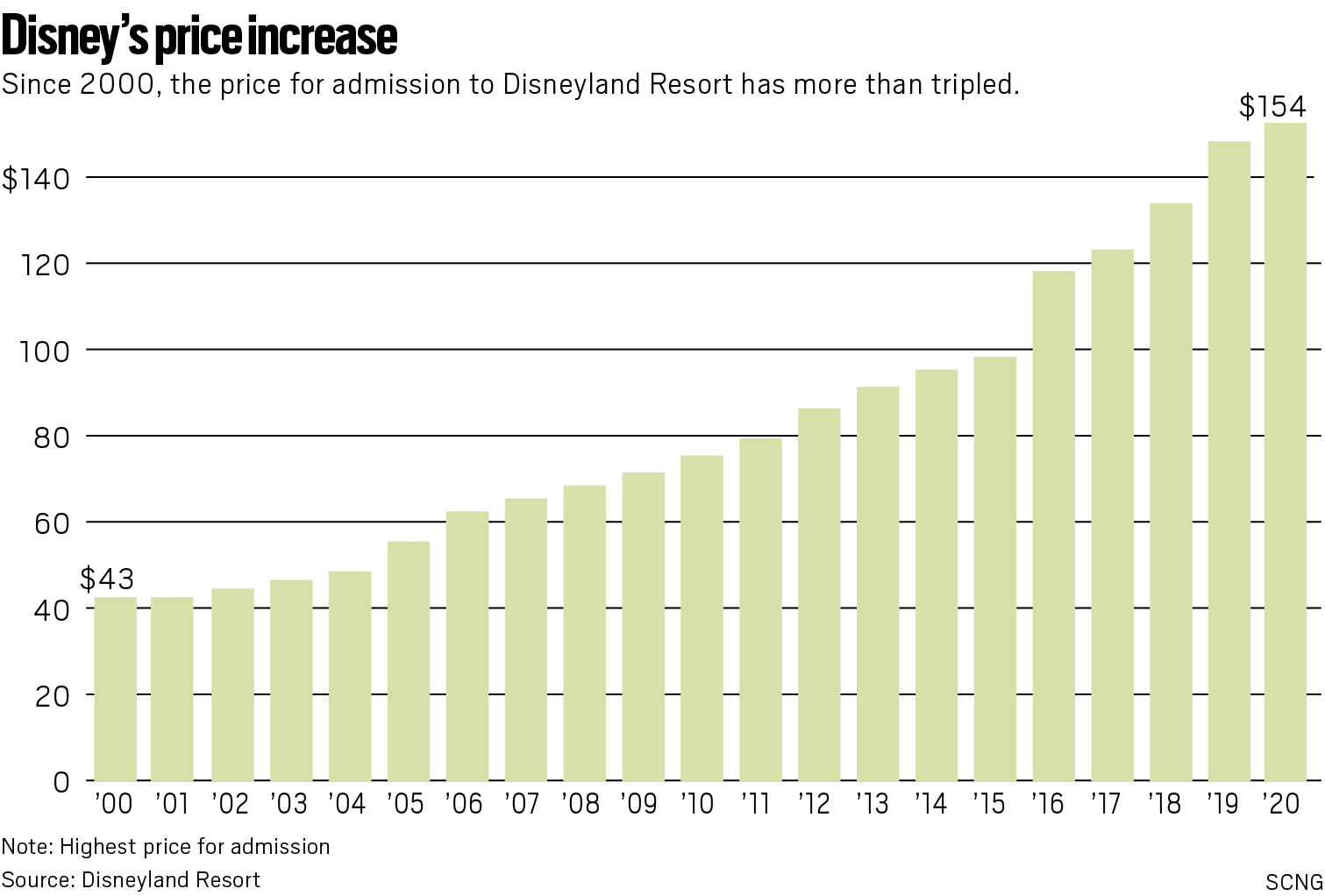 Disney’s chief rival, Universal Studios, is also charging more than $100 per day for its parks. And all that is before paying the inflated costs for food inside a park.

Prices have grown so preposterously that Disney now offers a payment plan for its passes. Just like a family home or a college degree, a theme park vacation has gone from a manageable expense to an absurd luxury.

That price increase might be justified if it at least kept demand low enough to make the park experience just as enjoyable as before. But instead, theme parks are packed to the gills, swamped with humanity just like the country that houses them.

America’s most famous theme parks were built for a country that still pleasantly uncrowded. When Disneyland opened in 1955, America’s population was 165 million, exactly half what it is today. California’s population was just 13 million, one-third of today. Since then, while the park has only grown marginally, attendance has exploded. In 1992 11.6 million people visited Disneyland. In 2019, almost 19 million people visited. Magic Kingdom grew from 11.5 million to 20.5 million. The growth is even more jarring at less famous amusement parks. Cedar Point in Ohio first exceeded a million visitors in 1960; in the last year before COVID-19 it cracked 3.6 million. Six Flags over Texas has grown from less than 2 million visitors in the 60s to more than 3 million today.

The bigger crowds mean that, instead of a joyous experience, a visit to a major park during busy season is a miserable one, requiring waits of 45 minutes, an hour, or even longer to go on a single ride (for particularly in-demand attractions, 4-hour waits aren’t unheard of). Of course, America has suffered the same fate. America still may be a massive country, but opportunity is increasingly concentrated in just a few major cities, and effectively unlimited immigration has turned those cities into cramped, sprawling hellscapes. The average one-way commute in America has grown from under 22 minutes in 1980 to more than 27 minutes today. The typical Los Angeles resident spends more than 100 hours a year just being stuck in traffic, on roadways that have hopelessly failed to keep up with the area’s explosive population growth.

The pioneer of 19th Century America spent his life building a vast wilderness into the most powerful and advanced nation in human history. His 21st Century grandson spends his life dying by inches in a three-hour line for Space Mountain.

A Different Set of Rules for the Rich

Of course, if oppressive lines aren’t your jam, there’s an alternative: Just fork over a few thousand dollars to have a better experience. For as little as $425 an hour (minimum seven hours!), you can hire a Disney tour guide to breeze you through all the lines for everyone else, and experience what it’s like to be a megadonor’s child visiting a college campus.

Airports may be commercial hubs, but it’s amusement parks that are meccas of commercialism, the relentless exploitation of every facet of human existence for profit. Whether it’s Walt Disney’s classic films, or the Marvel Cinematic Universe, or Star Wars, or Harry Potter, or Peanuts, or Dr. Seuss, theme parks have become masters of taking classic (and not so classic) cultural products and mashing them into a refined commercial slurry. Want to build your own “real” lightsaber? It’s just $199.99 at one of Disney’s Star Wars: Galaxy’s Edge attractions. If that’s too pricey, how about a $55 replica wand from Universal’s Wizarding World of Harry Potter? If that’s not good enough, you have more than a hundred alternatives to choose from: 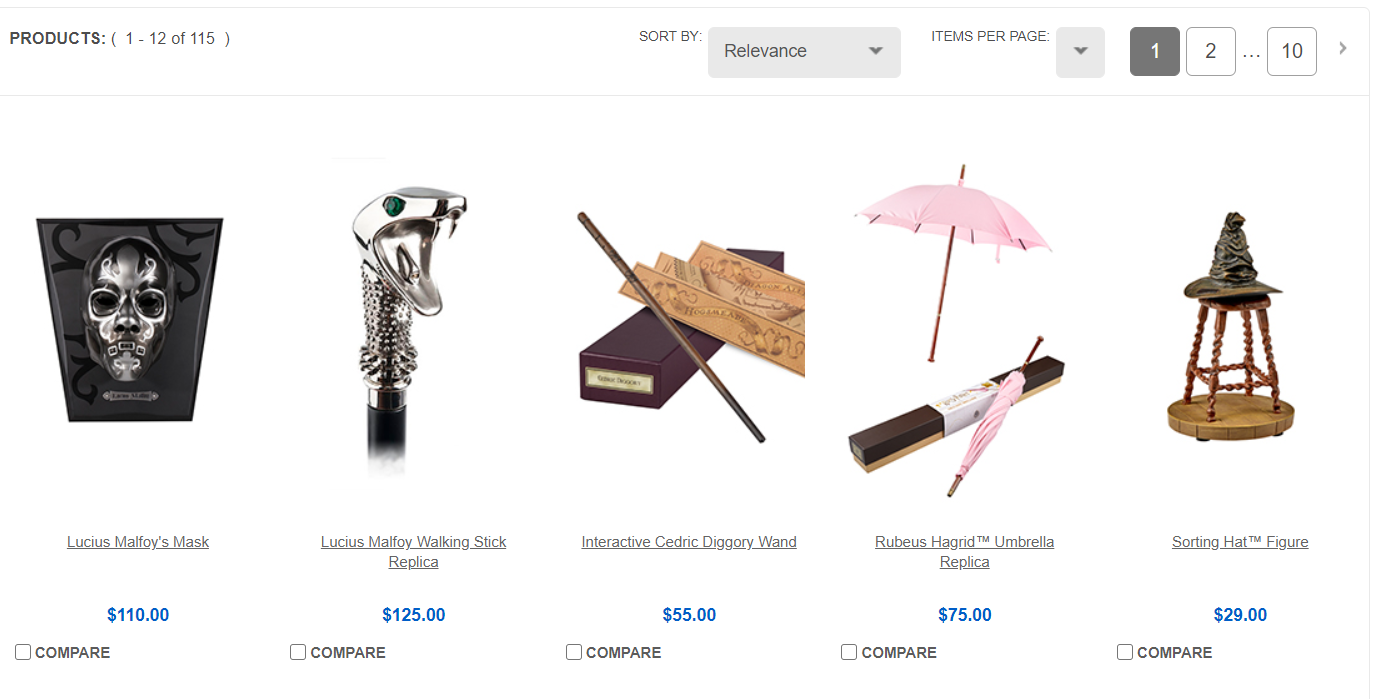 No trinket is too silly to be sold for a 500% markup at a theme park, cashing in on adults’ near-universal nostalgia for the better era known as “the past.”