Earlier this week an appeals court overturned the district court’s ruling that 1/6 defendant George Tanios be detained without bond, noting that the D.C. district court “clearly erred” in its assessment that Tanios posed a danger to the community.

A West Virginia man charged in the assault of Capitol Police Officer Brian Sicknick, who died after defending the U.S. Capitol on Jan. 6, can be released on bond while he awaits trial, a federal appeals court ruled.

The district court erred in assessing the danger posed by George Tanios, according to the appellate ruling issued Monday.

“The record reflects that Tanios has no past felony convictions, no ties to any extremist organizations, and no post-January 6 criminal behavior that would otherwise show him to pose a danger to the community within the meaning of the Bail Reform Act,” the ruling said. [WTAE]

Revolver News has been following George Tanios’ tragic and shameful mistreatment for months now. Tanios, a 39 year old sandwich shop owner from West Virginia, attended the January 6 protests along with a childhood friend Julian Khater, who runs a smoothie shop. Tanios allegedly was carrying bear spray in his backpack to protect against Antifa and other elements. When a melee involving Capitol Police officers erupted, Khater allegedly asked Tanios for “that bear sh*t” to which Tanios replied “no, no, not yet, it’s too early.” At a later time, Khater allegedly took the bear spray out of Tanios’ bag, used the spray, and the spray allegedly hit a few Capitol officers.

For responding “No, no, not yet, it’s too early” when Khater asked him for the spray, Tanios was charged mid-March with multiple counts of assault on an officer with a dangerous weapon and faces up to 60 years in prison. If 60 years — more than most people get for first degree murder — seems like a ridiculous sentence for Tanios, it gets even more outrageous when we recall the full context of these charges.

If you will recall, Tanios was slapped with very severe and high profile charges because the “bear spray” Khater allegedly took out of his backpack and sprayed allegedly found its way into the face of an officer called Brian Sicknick. Readers will remember that in the early months after January 6, the media Regime Media unanimously reported that Sicknick was bashed in the head by a violent, frothing MAGA mob with a fire extinguisher. Revolver News and other outlets immediately detailed the impossibilities of that narrative being even remotely true.

FLASHBACK: MAGA Blood Libel: Why are they Hiding the Medical Report?

Subsequently, the Regime Media was forced to retract that narrative and try to recalibrate their lies. The next official story was that Officer Sicknick did in face die at the hands of MAGA rioters, but instead of being bludgeoned to death with a fire extinguisher, he died from complications of bear spray. Unfortunately for Tanios and Khater, all of the punitive energy generated from the first lie that Sicknick was bludgeoned by a fire extinguisher ultimately fell on them as the media coalesced around the next lie that Sicknick actually died as a result of bear spray. The following headline from Salon is a representative sample of the media coverage contextualizing Khater and Tanios’ arrest.

On March 24, a so-called “bombshell” set of videos by the New York Times purported to show the exact moment that Khater allegedly sprayed Sicknick to death.

Video proof that suspect Khater sprayed the stream of toxic spray, that can be proven to have been bear spray, at Officer Sicknick-this action may have led to Sicknick’s death. (via @nytimes) pic.twitter.com/x18cDle4JB

On April 19, Revolver News was completely vindicated when the DC Medical Examiners report showed zero evidence of chemical ingestion by Officer Sicknick, and no association between a chemical spray and the cause of death — two strokes by ‘natural causes’.

Astonishingly, the situation gets even worse.

On March 31, Revolver went even further. We demonstrated, in excruciating forensic detail, that the so-called “bear spray” wasn’t even there.

The New York Times laughably drew a white box around an empty strip of air and said there was bear spray inside it. And CNN and the rest of Regime Media simply, squawkingly, and unthinkingly amplified the New York Times’ lie.

As demonstrated by Revolver News, here was the so-called “spray stream” of bear spray that the New York Times purported to be fired by Khater: 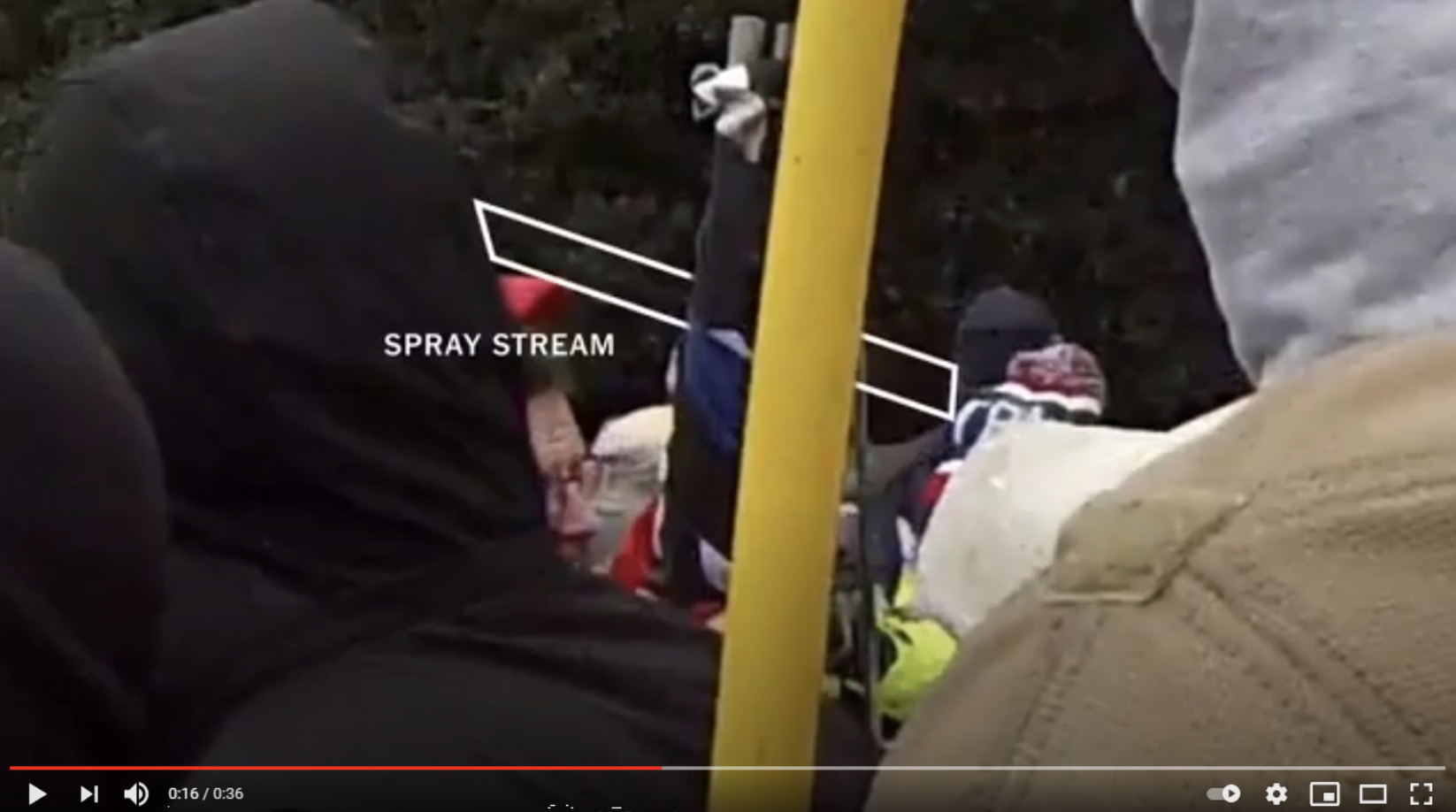 A thin stream of liquid is visible shooting from a canister in Mr. Khater’s hand. It is unclear in the video what Mr. Khater is firing, and prosecutors have alleged that Mr. Tanios brought two smaller canisters of pepper spray to the Capitol in addition to two cans of Frontiersman bear spray. [NYT]

But Revolver News did its own forensic investigation of the photos. Revolver was only the media outlet to identify the excruciatingly obvious: there was no “thin stream of liquid” visible. In fact, there was no stream at all. 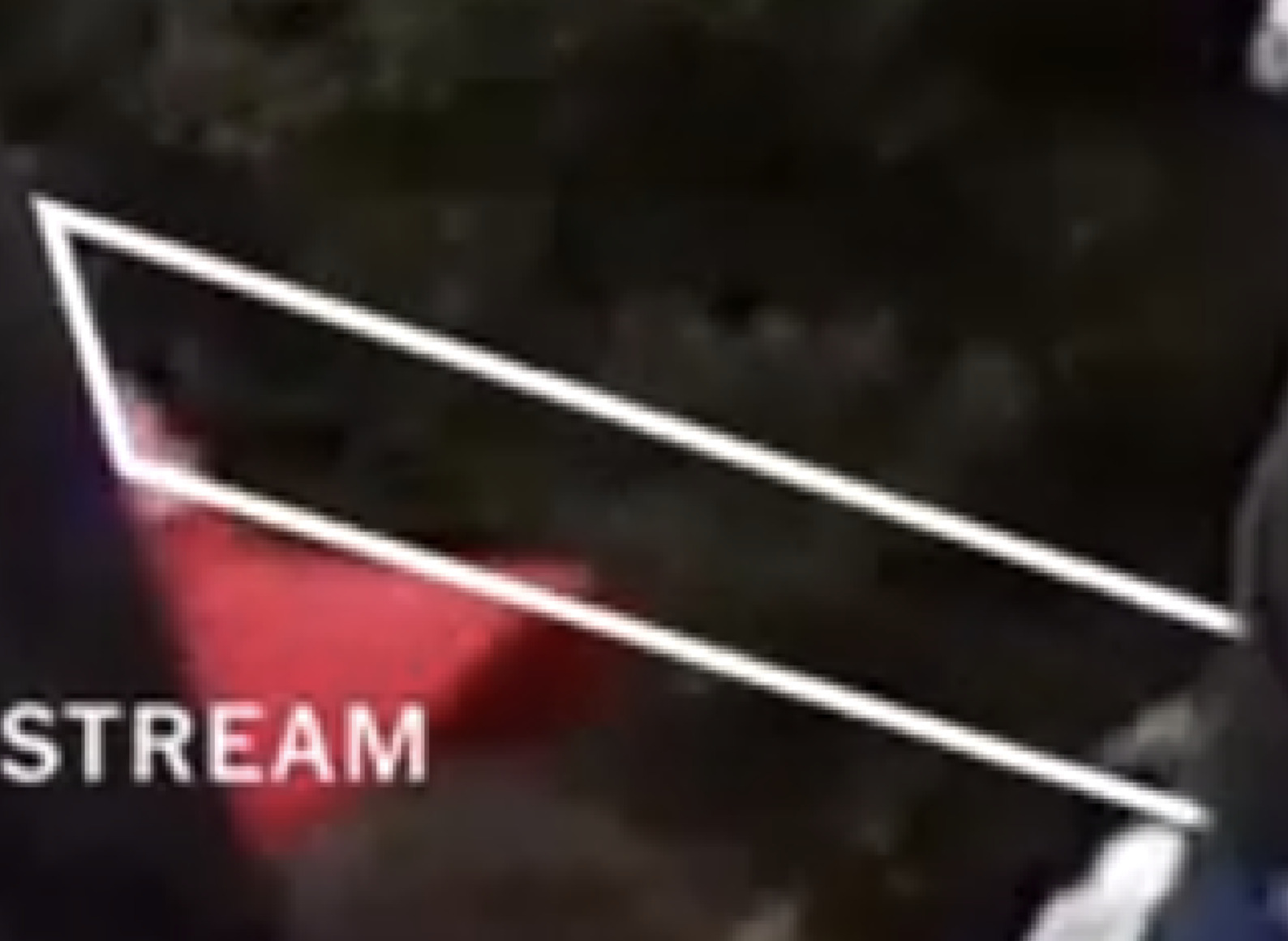 As we described months ago:

When we set the still frame to max resolution in Photoshop, it becomes apparent that the supposed “bear spray stream” is utterly invisible.

A tonal heat map of the image in Photoshop confirms that there is no “thin stream of liquid” visible at all. The boxed area is entirely indistinguishable from background noise…There appears to be nothing there. 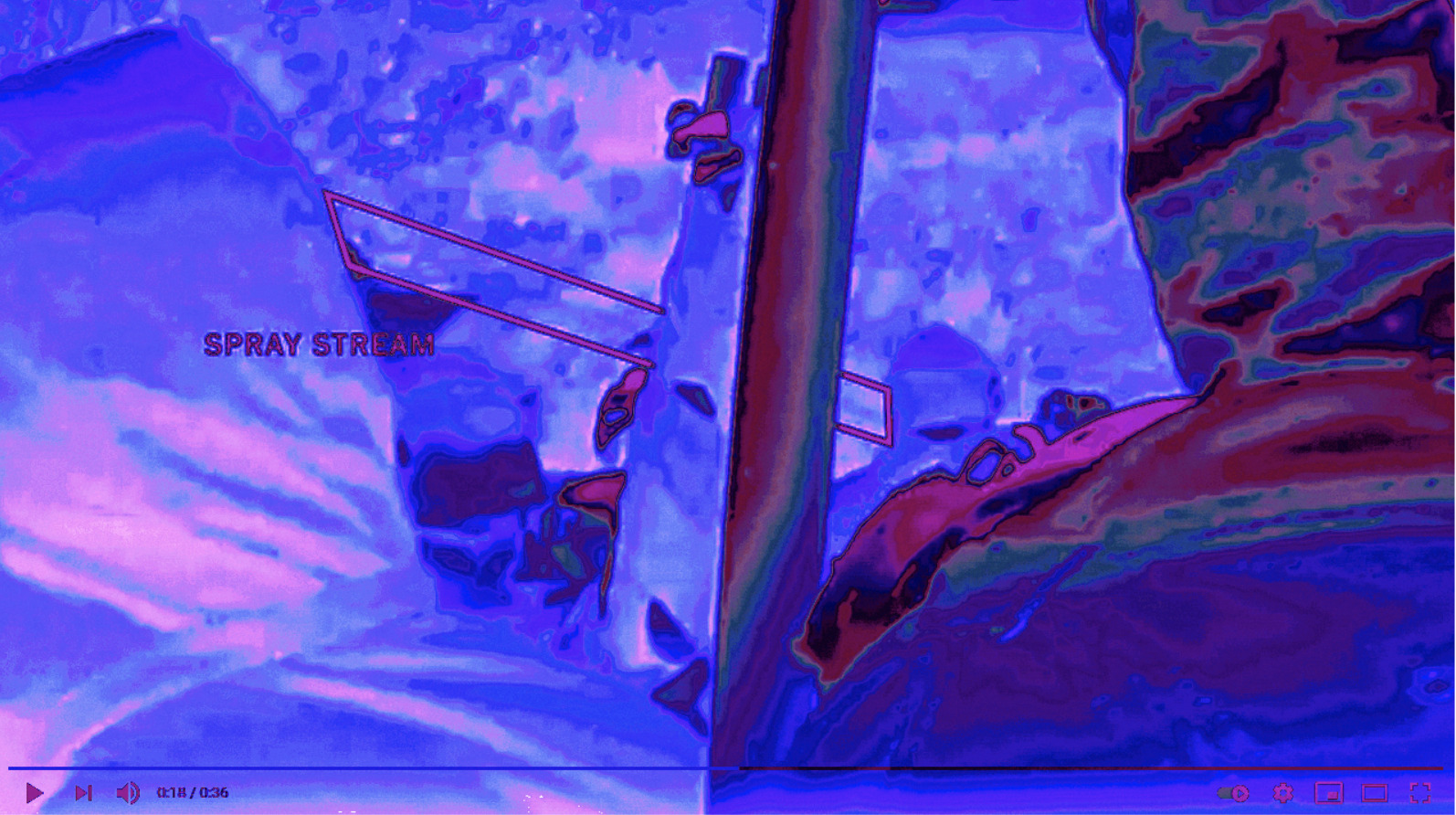 We further demonstrated what it would have looked like had Julian Khater’s bear spray canister actually been deployed.

And sure enough, Revolver News’ analysis was yet again vindicated when CNN admitted that not only did Officer Sicknick die of natural causes, but that no bear spray had been used against Officer Sicknick at all in the first place!

Washington (CNN) — The Justice Department on Tuesday abandoned the idea that pro-Trump rioters had used bear spray against US Capitol Police Officer Brian Sicknick during the January 6 riot, a major change after implying for weeks that bear spray, not pepper spray, had been deployed.

Prosecutors addressed the seemingly small but significant difference at a detention hearing for the two men charged in connection with the chemical attack. All sides now acknowledge that the defendants, Julian Khater and George Tanios, brought bear repellant to the Capitol and that Khater asked for it just moments before the attack but ended up using pepper spray instead.

The clarification came a week after Washington’s chief medical examiner ruled that Sicknick had suffered strokes and died of natural causes a day after the attack. The finding undercut theories that an allergic reaction to the chemical spray may have led to his death.

Taken together, these developments clarify key facts about the day before Sicknick’s death, which has emerged as one of the most well-known incidents from the insurrection.

The narrative was already muddled by prosecutors repeatedly citing the bear spray, unsanctioned speculation from the former US attorney who led the probe, exaggerated statements from law enforcement and inaccurate early press reports about a fire extinguisher hitting Sicknick.

Khater and Tanios have pleaded not guilty and maintain that they’re not a danger to the public. They’re seeking to be released from jail and will be before a federal judge again next week. [CNN] 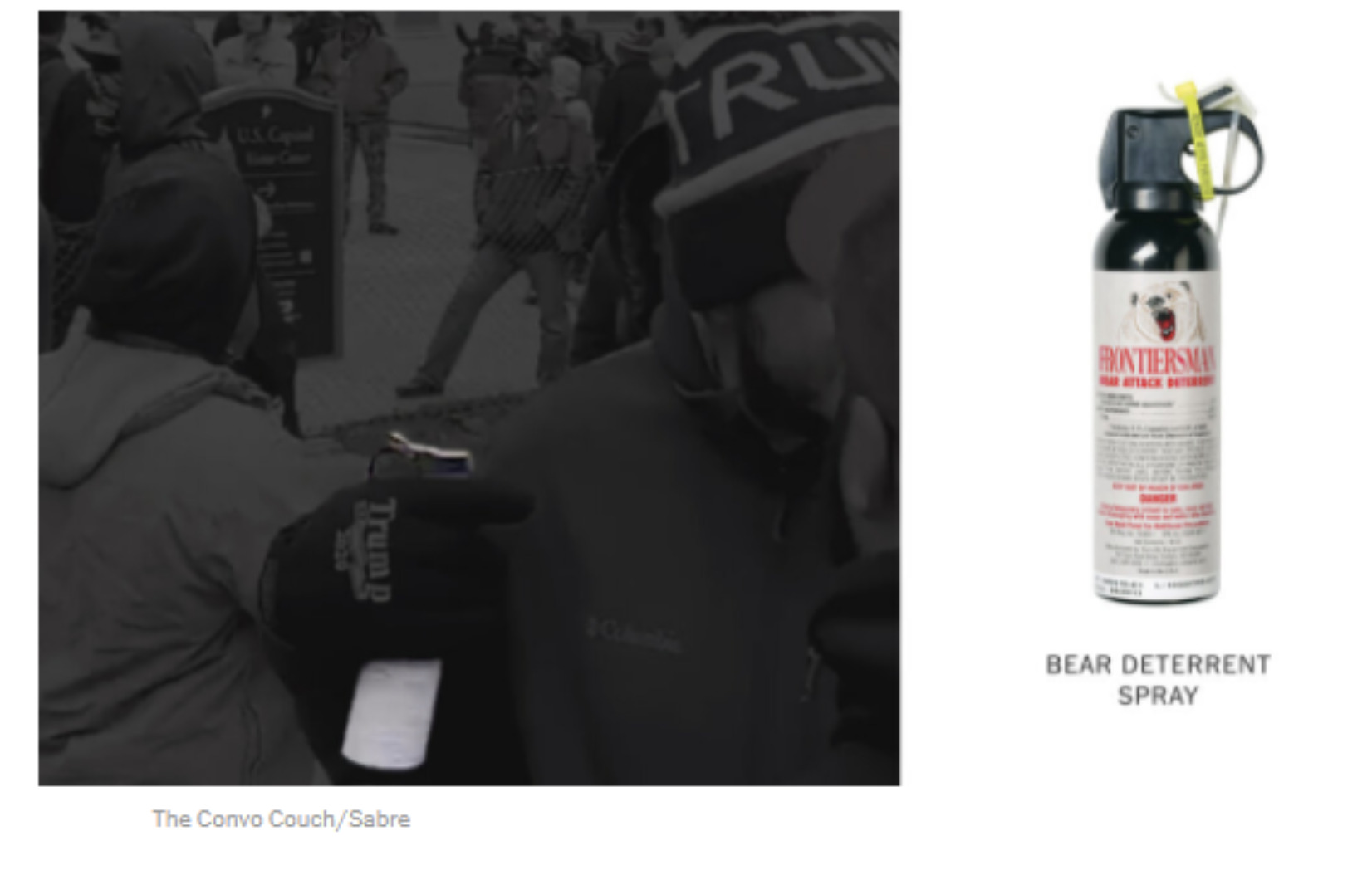 The DOJ and FBI have now simply moved their goalposts into an even more unaccountable realm. There is no visual or chemical record of the alleged events in question at all.

While Revolver is glad that Tanios is finally allowed out on bond, the charges filed against him remain unspeakably absurd and unconscionably unjust. He faces 60 years in prison for saying “no, no, not yet” when his friend reached into his bag to grab bear spray. And it turns out Officer Sicknick wasn’t even sprayed with bear spray, and there is no evidence whatsoever of Khater using any spray of any kind.

Apart from the utter injustice of Tanios’ detention and indictment, the above analysis ought to remove any doubt as to the acuteness and accuracy of Revolver News’ investigative capacity. There’s a reason the Regime Media and its allies in the Biden Administration would do anything to stop our reporting, in particular our ongoing investigation into possible Federal foreknowledge and involvement in the 1/6 operation.

We take pride in their scorn and draw motivation from their endless efforts to silence us. Our investigation into the full truth behind the events of 1/6 is just beginning.

With vindication after vindication, our biggest investigative work is yet to come. Stay tuned.