“Our people have all left Drudge ... They like REVOLVER and others!”
President Donald J. Trump
“...many of Drudge's long-time readers have fled to Revolver News...”
Tucker Carlson, FOX News
Close No thanks, I don't want breaking news emailed to me
Revolver Investigates Disturbing Link Between DHS and The Domestic War On MAGA 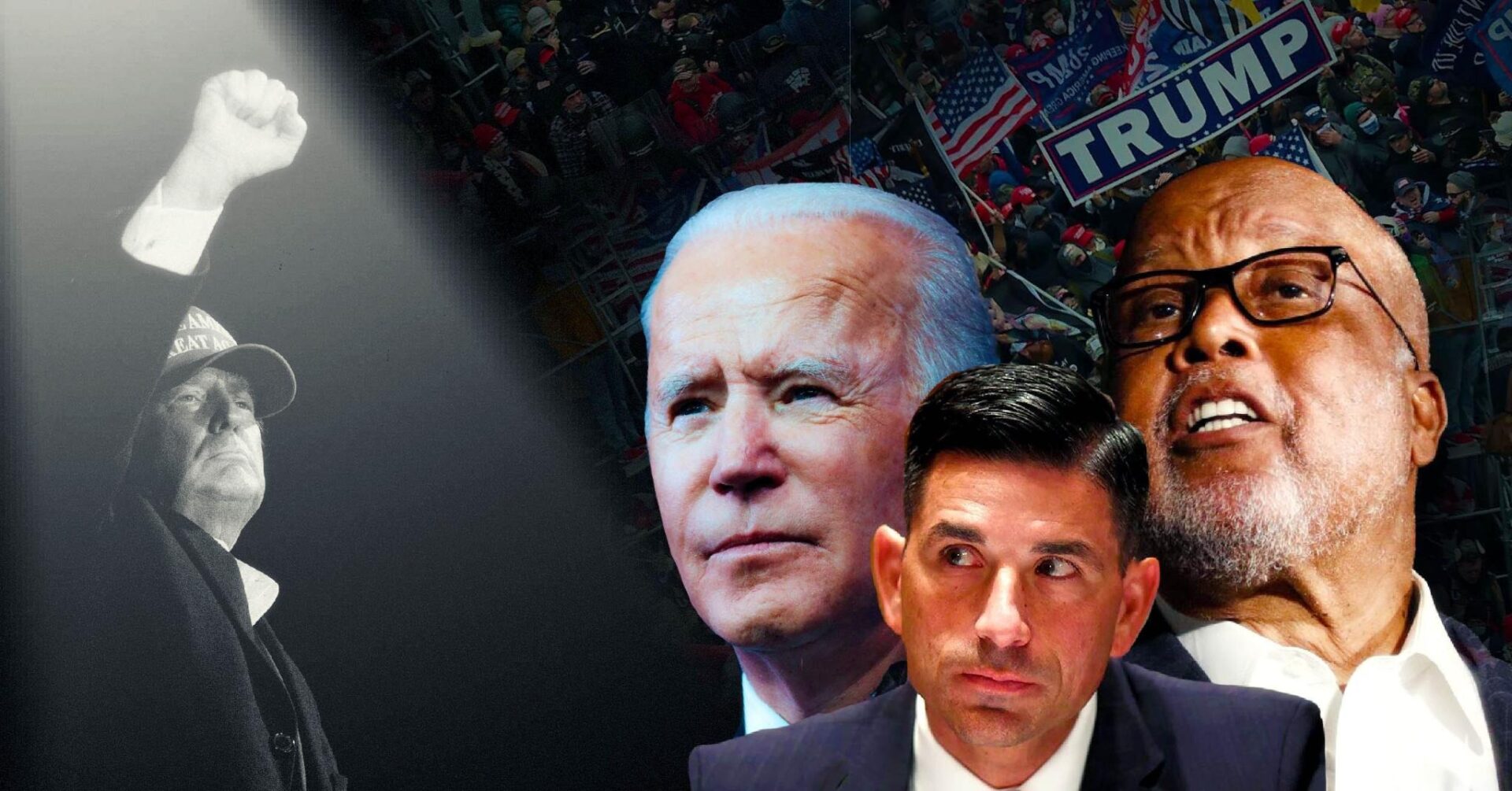 In a move that is Orwellian even by the current year’s dystopian standards, Biden’s Department of Homeland Security on Monday issued a heightened terrorist threat assessment centered around “online misinformation:”

The United States remains in a heightened threat environment fueled by several factors, including an online environment filled with false or misleading narratives and conspiracy theories, and other forms of mis- dis- and mal-information (MDM) introduced and/or amplified by foreign and domestic threat actors. [DHS]

That’s right, folks, the Ministry of Truth is officially here, under the auspices of the government’s Cybersecurity & Infrastructure Security Agency:

CISA’s Mis-, Dis-, and Malinformation (MDM) team is charged with building national resilience to mis-, dis-, and malinformation and foreign influence activities. Through these efforts, CISA helps the American people understand the scope and scale of MDM activities targeting elections and critical infrastructure, and enables them to take actions to mitigate associated risks. The MDM team was formerly known as the Countering Foreign Influence Task Force (CFITF). [CISA]

While the official announcement concedes that there has been no underlying change in threat conditions over the past year (leaving aside the threat the Regime poses to the American people), it nonetheless emphasizes the urgent danger of “false or misleading narratives, which sow discord or undermine public trust in U.S. government institutions.” In the land of freedom, democracy, and drag queen supremacy, how fortunate to have a US government national security bureaucracy to warn against the dire national security threat of… Americans who more and more do not trust their government.

The Department of Homeland Security threat assessment goes on to highlight specific concerns related to so-called “misinformation” on Covid-19 and election integrity issues. But of course!

Key factors contributing to the current heightened threat environment include:

Even more disturbingly, the DHS announcement cites as a potential national security threat the lifting of Covid restrictions such as lockdowns. After all, when the cattle are allowed outside of their homes without restriction, there’s a greater likelihood of a terrorist attack!

As COVID-19 restrictions continue to decrease nationwide, increased access to commercial and government facilities and the rising number of mass gatherings could provide increased opportunities for individuals looking to commit acts of violence to do so, often with little or no warning.

It is worth processing this remarkable statement. The completely unnecessary Covid-lockdown restrictions have become normalized to the point that the Department of Homeland Security considers the removal of such restrictions as a national security threat. This is a development almost too dark for satire. Of course, the Covid restrictions that remain in place, such as vaccine mandates, also pose a national security threat — because Americans might dare to object to such measures:

Meanwhile, COVID-19 mitigation measures—particularly COVID-19 vaccine and mask mandates—have been used by domestic violent extremists to justify violence since 2020 and could continue to inspire these extremists to target government, healthcare, and academic institutions that they associate with those measures.

This national security assessment comes just days after the Biden White House called on audio streaming giant Spotify to do more to censor Joe Rogan and others who would dare deviate from the government-approved Covid narrative. That the Biden White House has seemingly enlisted the Department of Homeland Security to amplify its crusade against prohibited speech constitutes a dangerous assault on the First Amendment that would take a separate article to explore in proper depth.

For now, we might begin with the question as to why, of all agencies, the Biden regime would have enlisted the Department of Homeland Security. Put another way, what’s going on with the DHS? Why does the DHS seem to be playing a special role in the Domestic War on Terror — that is, the re-purposing of the American national security apparatus domestically, in order to treat American citizens with the wrong political leanings as national security threats?

The question concerning the specific role of the DHS as an instrument in the Domestic War on Terror presents itself all the more forcefully when we recall the special relationship the DHS enjoys with Congressman Bennie Thompson, who just happens to be the Chairman of the heavily politicized and corrupted January 6 Committee.

Thompson is a key component in the establishment DNC’s merger with the national security state after 9/11, using the pretext of fake “domestic terrorism”. As an untouchable incumbent in Mississippi with 28 years in Congress, Thompson was the chair of the Homeland Security Committee from 2007-2011 and has been back in charge again since 2019.

Essentially, whenever Democrats have a majority in the House, Thompson is put in as the hatchet man to control oversight of the Department of Homeland Security.

Bennie Thompson scratches the back of an ever-expanding US national security state. In turn, Thompson is rewarded with plush committee chair roles and an expanding DHS turf of his own.

Indeed, Thompson was tapped to serve as the Permanent Chair of the 2020 Democratic National Convention. In the 2020 election, Thompson presided over all official business of the convention that made Joe Biden the Democratic nominee for President.

Ironically, in 2004, Thompson was one of only 31 House Democrats who voted to overturn the results of the Bush-Gore election. But today, the vast Department of Homeland Security agency reports to him. And that agency now calls anyone who claims fraud in the 2020 election “Potential Terror Threats.”

See how that works? When Bennie Thompson does it, it’s democracy. When you do it, it’s terrorism. 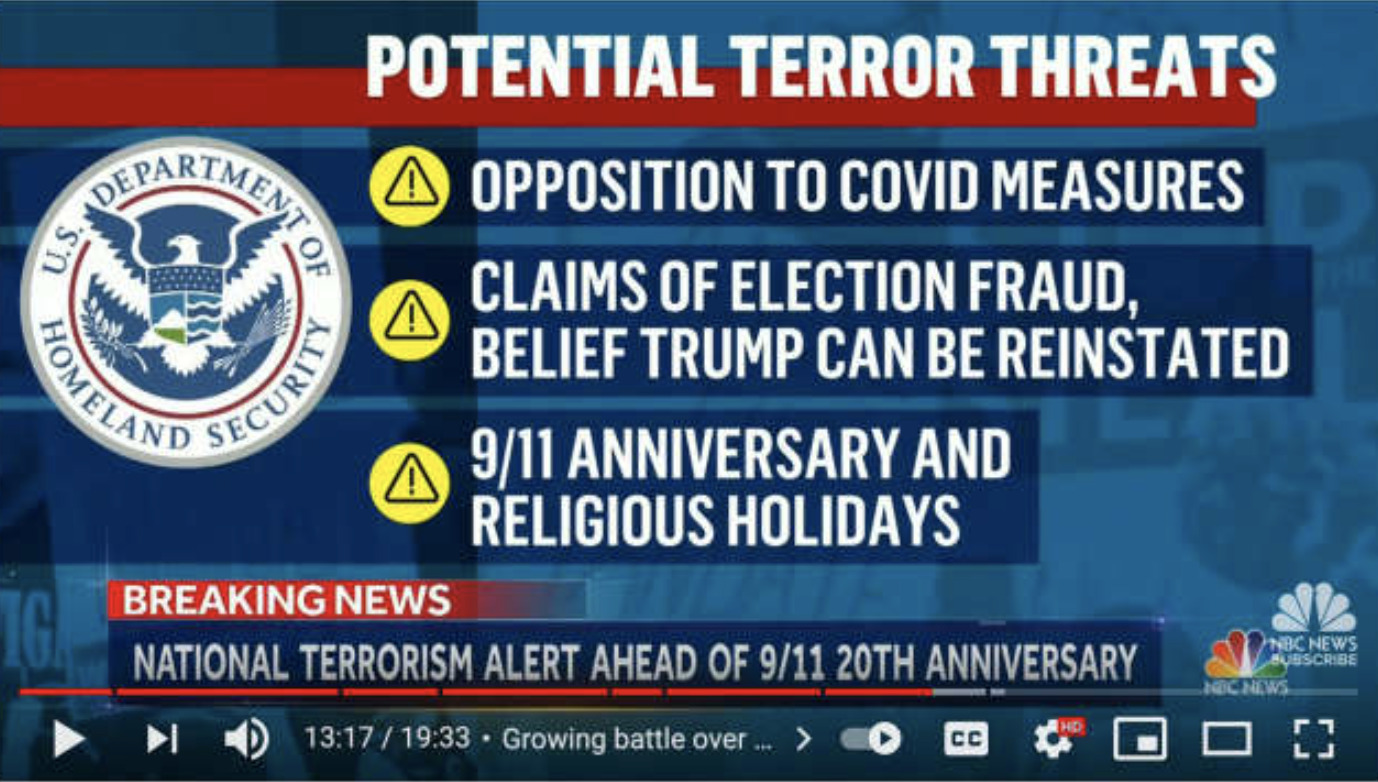 In 2007, Thompson’s first act as chair of the Homeland Security Committee was to sponsor a bill that granted sweeping new police powers to DHS, using the pretext of 9/11.

However doubtful the role of the DHS in the War on Terror may have been morally and effectually, Bennie Thompson has at any rate always demonstrated far more passion for the “domestic” element of DHS’s duty to “defend against all enemies, foreign and domestic.”

In the clip below from 2013, Thompson chastised the Republican-led Homeland Security Committee for its insufficient emphasis on homegrown domestic threats:

With the appropriately botched withdrawal from Afghanistan all but officially marking an end to the War on Terror, Bennie Thompson’s 2013 vision for the Department of Homeland Security has proved as apt and prescient as ever. Indeed, the Department of Homeland Security now finds itself in the same dilemma as many bloated, failed, and inefficient bureaucracies desperate to justify their budgets — it needs a new purpose. And in the present environment there are essentially two (not mutually exclusive) options — get on board with the new Cold War with China, or get on board with the new War on Terror — that is, the Domestic War on Terror aimed at American citizens whose political positions threaten the corrupt ruling class.

To its credit for forward thinking, the Department of Homeland Security was one of the earliest and most aggressive in repurposing itself to prosecute the new Domestic War on Terror against American citizens with the wrong political leanings. In September of 2020, the Department of Homeland Security took the remarkable and clearly politicized step of identifying so-called “white supremacy” as the number one terror threat facing America—and this all happened under Donald Trump!

This is all not to suggest that Bennie Thompson is any kind of mastermind. In all likelihood, Thompson smiles and serves faithfully as a mouthpiece for the security state and is rewarded with honorific but vacuous perks in return. January 6 Chair Bennie Thompson’s DHS connection, along with the recent threat announcement for online misinformation on Covid do, however, gesture toward the DHS’ playing an especially important role in the most important and dangerous development in the past several decades: the weaponization of the American national security apparatus against the American people.

In order to better understand this new domestic, politicized variety of the War on Terror, it might behoove us to take a closer look at DHS’ special role in this War. And this is precisely what we will do. Stay tuned, we’re going on a deep dive.