One could not have possibly watched the vicious attack on podcast host Joe Rogan and believed that it was all a run-of-the-mill “Twitter mob” cancellation. We certainly didn’t.

As it turns out, the political attack on Joe Rogan was a planned, calculated hit, with the heaviest lifting done by Clintonland veterans who now stoke Twitter mobs for grift and profit. Surprise, surprise.

Let’s hit the rewind button and analyze how this whole thing went down.

First of all, the video compilation of Joe Rogan saying the “n-word” may be a few years old, but it was revived and publicized by the left-wing Twitter group PatriotTakes.

This is who the right is defending. pic.twitter.com/qqaB12dFYz

PatriotTakes’s Twitter profile reveals that it is partnered with another group, Meidas Touch. Meidas Touch is a Super PAC, a political organization that is allowed to collect unlimited donations from outside supporters, but can only make limited donations to support candidates and is barred from coordinating with campaigns.

For the past week, PatriotTakes and Meidas Touch have been fighting relentlessly to make the Rogan story as viral as possible, with the clear objective from the very beginning of getting Rogan’s show pulled off Spotify. This is not a purely organic Twitter mob. This is the work of professionals in creating astroturfed viral content. Professionals who know how to stoke an outrage flame as hot as possible.

Of course, duplicity is their stock in trade. The professional goons at Meidas Touch claim to oppose cancellation, when it is obvious they relentlessly support it:

1/
Meidastouch is now trying to bscktrack and pretend they did not help launch an attack on Joe Rogan and did not try to Cancel Joe Rogan.

I already dealt with most of the claims in this thread, but let's do it again because I won't stand for this dishonesty and nonsense. https://t.co/nRMcRp3Ljf

3/
Meidastouch says they don't want to cancel people (pic 1), but
1. when Malcolm Nance said #firejoerogan Ben from Meidastouch RT'd it (pic 2).
2. When Patriottakes called for Joe Rogan to be fired Ben said Thank you! (pic 3) and Meidastouch amplified/endorsed that tweet (Pic 4) pic.twitter.com/e8FfcGSwne

Why? because Patriotakes had political pros (Meidastouch) amplify and boost their tweet. pic.twitter.com/78YkvDhqUZ

7/
This is the twitter feed of Ben Meiselas (@meiselasb) of Meidastouch.
His whole feed is just tweet and RT's of Joe Rogan clips to make Rogan look bad. Ben has 162k followers. He is not just RTing randomly, he's trying to get "saturation."

10/
The Meidastouch crew did not create the video, but they worked with @patriottakes to amplify and boost the signal of the video so it would get traction and go viral.

They were manufacturing virality, and they knew precisely what they were doing because they are professionals

Even before the N-word tape, PatriotTakes was relentlessly tracking Rogan and complaining, with the obvious goal of going viral and taking out Rogan.

Jordan Peterson went on Joe Rogan’s podcast and said that "there's no such thing as climate." It only got worse from there.pic.twitter.com/t52JEnz9Fc

I wonder what Alex Jones and Joe Rogan talk about. pic.twitter.com/ejMneNbSBi

As Wokal Distance points out above, Meidas Touch is the work of three left-wing brothers named Ben, Brett, and Jordan Meisales. But they aren’t the only ones involved with the Super PAC. Another figure tied to the group is Adam Parkhomenko, who identifies himself on Twitter as a “senior advisor” to the group. 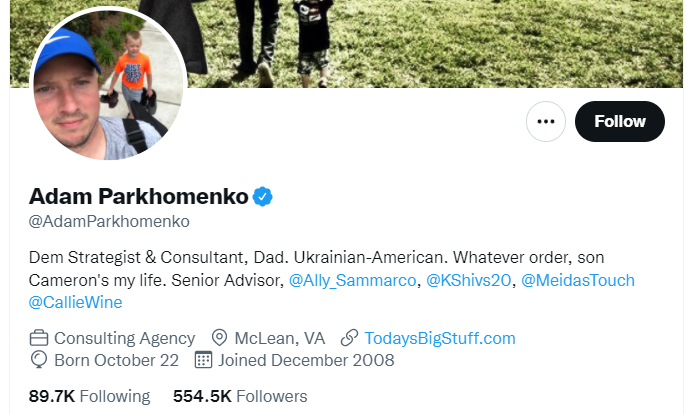 It may be hard to believe such a person exists, but Parkhomenko is a fanatical acolyte of Hillary Clinton. According to a 2016 Washington Post profile, Parkhomenko has “devoted his life to her cause”:

[T]his campaign knows it can trust Parkhomenko. They know he has dedicated much of his life, since age 17, to her ascent to the presidency. They know he put off college to work for her, then started the Ready for Hillary super PAC.

There aren’t a lot of Clinton superfans. All the passion goes to the fiery socialist and the theatrical reality-TV star currently in the race. They fill stadiums and call for revolution. Clinton, on the other hand, told Lena Dunham, “If you can’t get excited, vote pragmatic.”

So why then has Parkhomenko spent much of the past 13 years working toward a Clinton presidency? He’s not particularly close with the candidate, nor has he earned inner-circle status. His fanaticism is a very practical kind. You might even call it . . . Clintonian.

Parkhomenko doesn’t have one Rosebud moment that sparked his devotion; he’s got a thicket. As a kid in Arlington, Va., he seethed with jealousy when he learned his best friend’s dad was a convention delegate with a photo of Hillary Clinton on the family piano. By 13, he started writing letters to politicians and asking for a signed head shot.

Then there was the time Hillary came to his elementary school and shook his hand; and the time he washed Bill’s golf cart at the local course. He still has a $5 bill the president signed for him.

“He’s absolutely the person I’m supporting in the 2020 primary, should he decide to run,” Parkhomenko said at the time.

Parkhomenko has had Rogan in his crosshairs for a while. Back in 2020, he tweeted about Rogan’s past use of the n-word during his podcast.

Yes, it’s super shocking that Joe Rogan, who enjoys using the n-word, thinks Obamagate is a real thing. I don’t understand this thing these days where we’re supposed to pretend that obvious racists aren’t racists.

Today, Parkhomenko has a lucrative arrangement with Meidas Touch. In 2021, Rolling Stone published an investigative piece on the Super PAC’s finances, which appear to have been designed to minimize transparency:

At the heart of MeidasTouch’s opaque finances is an arrangement with a Virginia company called Prestige WW Inc. — a reference to the Will Ferrell comedy Step Brothers. Prestige received more than half a million dollars of Meidas’ donor money, FEC filings show. Prestige is run by Adam Parkhomenko, Meidas’ political strategist and a former aide to Hillary Clinton who later did political work for Michael Avenatti, a onetime anti-Trump hero who was convicted last year of trying to extort $20 million from Nike. (One of Ben Meiselas’ law partners, who was a witness to the events at the center of the extortion scheme, was subpoenaed in Avenatti’s criminal case in Manhattan, and Ben Meiselas is listed as an interested party in the case, as is Nike. According to Meiselas, he was listed as a result of being a managing partner in his firm at the time of the subpoena to his law partner. Rolling Stone is not aware of any facts suggesting that Nike, Meiselas, or his partner were implicated in any of the alleged wrongdoing.)

While Parkhomenko frequently promoted MeidasTouch on social media, his work for the Super PAC was not made clear until Rolling Stone started asking questions. Prestige WW has no public-facing website. Its owner could only be identified through a search of Virginia state corporate filings. Unlike MeidasTouch, Parkhomenko’s Prestige WW, as a private entity, isn’t required to disclose its spending.

[I]n the course of reporting, Rolling Stone learned that Prestige has an unusual financial relationship with Brett Meiselas. In December, Brett said he was being paid for his work producing videos for the Super PAC and later volunteered that the payments were coming through Prestige. Brett, who holds legal authority for MeidasTouch as its treasurer, is being paid as a consultant to his own Super PAC’s consultant — an arrangement that Noti says flies in the face of transparency requirements mandated by federal law.

“That’s not OK,” says Noti. “If the PAC is paying the company just as a pass-through for the money to get to its treasurer or to some fundraising company or whatever, what they need to be disclosing are the ultimate payments to those recipients. And there are rules on the books that require that. The FEC has been derelict in enforcing them because the FEC is derelict in enforcing everything. But there are laws on the books that say you can’t do that.”

There’s more to the arrangement that makes it all look shady. Federal Election Commission records show that both the Meidas Touch and the PatriotTakes Super PAC also share the same address: 51194 Romeo Plank Road, Macomb, MI 48042. The location is a UPS store. The only difference in the addresses is the box number. 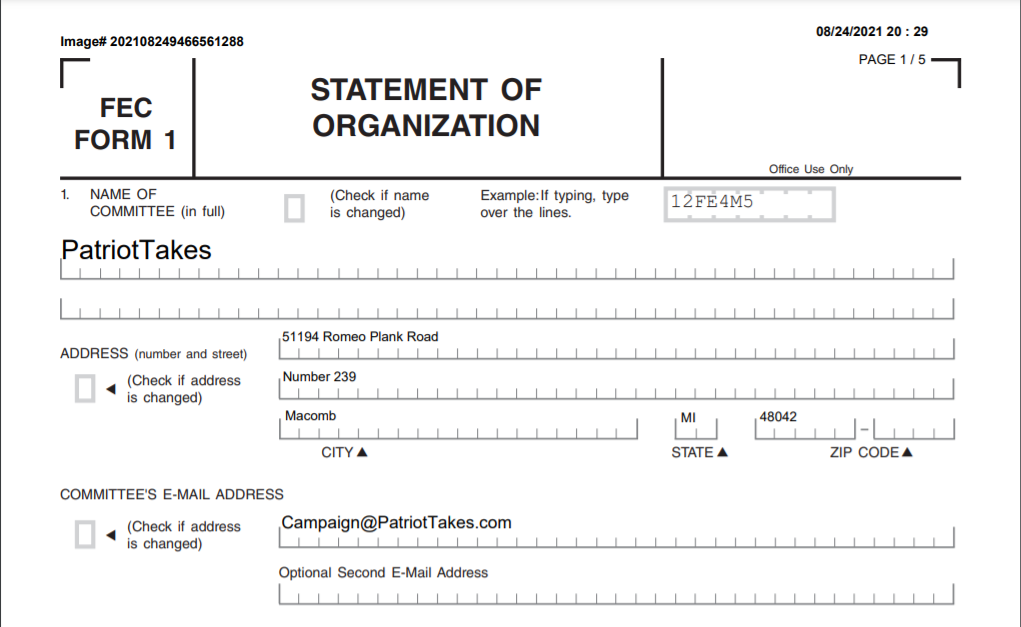 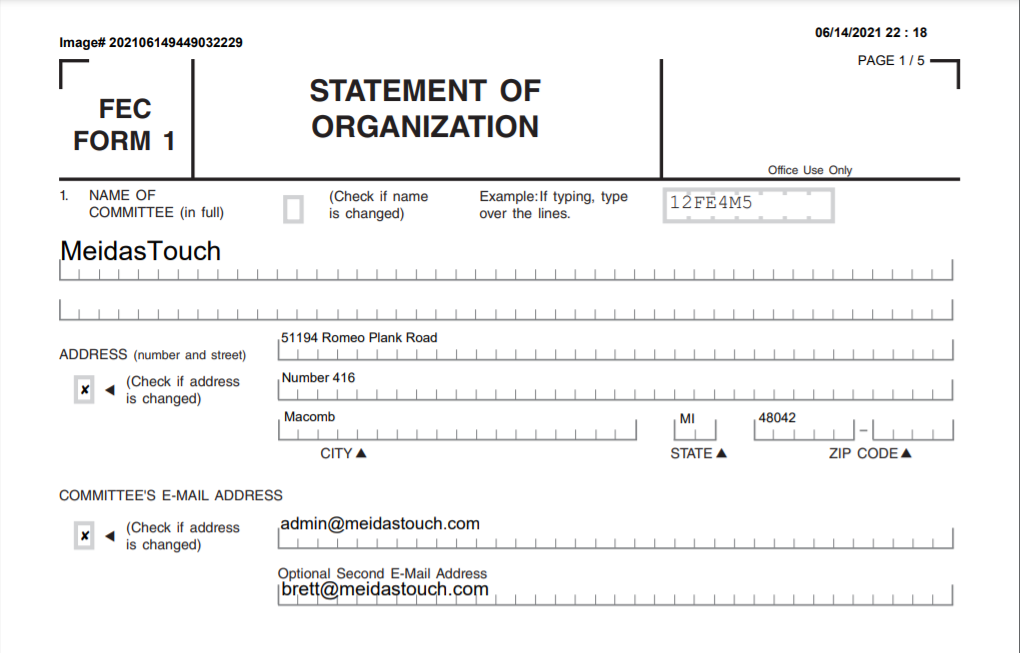 At least two other PACs founded by Parkhomenko also share the same Macomb, MI address. In 2017 Parkhomento launched the Party Majority PAC, targeting then-Senate Majority Leader Mitch McConnell with bogus allegations that the leader was “colluding” with Russia. In June 2019, Parkhomenko founded the Cyber War Room Super PAC to raise awareness of investigations into the Trump Administration and publicize the Administration’s “lies.” FEC records show both Party Majority and Cyber War Room have the same address as Meidas Touch and PatriotTakes.

In fact, many Democratic PACs all have this same Macomb UPS store as a mailing address. They include groups like Pressure PAC, Protect the Results PAC, Protect the Vote PAC, and Make My Day PAC. Whether Parkhomenko founded all of these PACs as well isn’t clear, but they do all share many of the same consultants. For instance, consultant Amy Willis Gray and her firm Grays Consulting have provided “compliance consulting” to the entire trifecta: PatriotTakes, Meidas Touch, and Make My Day.

But the Clinton ties to the cancel-Rogan movement go beyond Parkhomenko. On January 25, days before PatriotTakes’s promotion of the n-word montage, another nonprofit called Ultraviolet released a petition demanding that Spotify remove the Joe Rogan Experience. The petition currently has more than 100,000 signatures. The chairwoman of Ultraviolet’s board is Karen Finney, who was Hillary’s press secretary during her days as vice president and later senior spokeswoman for her 2016 campaign.

That is the true nature of the relentless charge against Joe Rogan. Rogan’s fans are not outraged. There is not a mass upsurge of popular hatred against Rogan for his “misinformation” or “racism.” This is a political hit job by leftovers from Hillary Clinton’s failed presidential run. They aren’t even necessarily going after Rogan because he’s a threat (although he is). This is just what parasitical career operatives on the left do. The Post biography of Porkhomenko says it all: He built his entire career attaching himself to the Democratic politician who seemed like the most long-term sure thing. Now, after Clinton’s failure, the most sure thing isn’t any candidate, but the perpetual excitability of the online left. By stoking Twitter frenzies heedless of the consequences, these operatives gain followers and attention, which they convert into consulting and advertising dollars. The activism is a front and always will be. In the end, it is money and power that matter to such creatures.

RELATED: Joe Rogan vs. the Globalists: Will He Fight?