The family of George Floyd is preparing a $250 million defamation lawsuit against Kanye West over false [Editor’s note: True] comments he made about Floyd’s death during an appearance on the Drink Champs podcast.

Roxie Washington, the mother of Floyd’s only daughter Gianna, intends to sue West, his business partners, and his associates for harassment, misappropriation, defamation, and infliction of emotional distress, according to a statement released on Tuesday. The family is seeking $250 million in damages.

During the podcast, West asserted the false [true] claim that Floyd died from fentanyl. “I watched the George Floyd documentary that Candace Owens put out… They hit him with the fentanyl. If you look, the guy’s knee wasn’t even on his neck like that,” West said.

Floyd’s family may have cared about him so little they abandoned his personal possessions after his death, but now they are very concerned about the George Floyd myth, or at least they money they can make by defending it.

And the George Floyd myth, as it is repeated over and over and over, takes a very specific form: Last summer, the Ad Council put out an ad centered on a phrase you have probably head before. Maybe you’ve heard it twice. Or ten times. Or a hundred.

Whoa! Did you see that twist at the end coming? Who’d have expected that George Floyd would be the gentle giant?

Well, you probably did expect it, actually. Most people have been convinced by the media’s portrayal of Floyd that he was big and benign; humongous and harmless; towering and tame. Well, except for that time he broke into a woman’s home and pointed a gun at her stomach while his friends looked for stuff to rob. Or that time he committed armed robbery in Houston.

But forget about those incidents — at least until the $250 million check from Kanye clears. George Floyd is called a “gentle giant” so often it might as well be his Homeric epithet.

Only one problem: there’s already a violent criminal whose Homeric epithet is “the gentle giant.” Before moving to his current location of “an early grave,” Michael Brown was throwing his gentleness all over the town of Ferguson, Missouri.

Sometimes, Michael Brown’s gentleness could be misunderstood. Many attacked him for robbing a convenience store and roughing up the owner just a few minutes before charging Officer Darren Wilson and getting shot for his trouble. But has anybody praised him for how gently he did it? 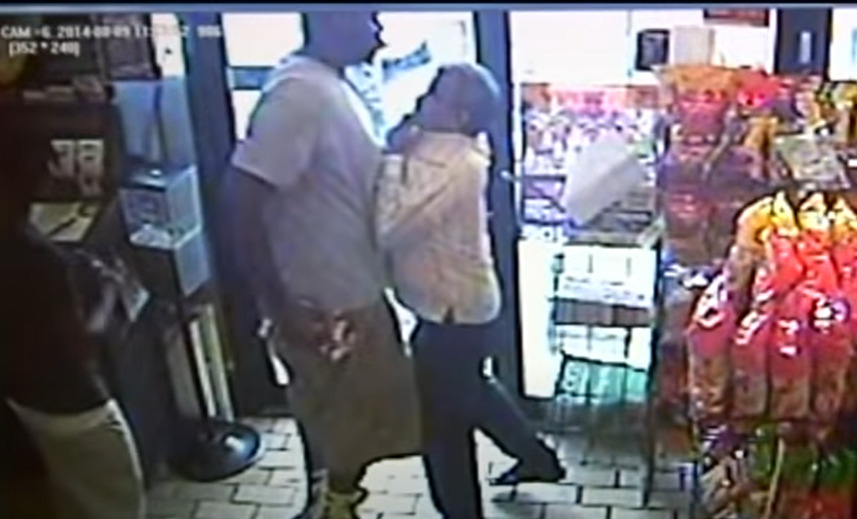 But wait! Brown and Floyd aren’t even the only Gentle Giants to be national news stories. Joining them to form the Holy Trinity of gentleness is one Eric Garner, who you may recall as the guy who started the whole “I Can’t Breathe” thing by (gently, giantly) resisting arrest when police tried to stop his latest offense in a life of petty crime.

Before he was a dead giant, the 6’3, 350-lb Garner was (you guessed it!) “also known as a peacemaker and a gentle giant.” It’s a real shame the police targeted this peacemaking gentle giant for arrest thirty separate times, including for assault.

The “gentle giant” has become a stock character of American life. Specifically, as a warning sign. If the giant is gentle, he might just be mental!

Sandra Sterling told Camerota that her nephew was, “like a gentle giant.” Police responded to reports that a man outside a convenience store had threatened a passerby with a gun, and the ensuing altercation resulted in Sterling being shot by police after being tased and tackled hard to the ground.

While police can be heard on the video claiming, “He’s got a gun!” Sandra Sterling refuted those claims.

“My nephew would never have a gun,” she said to Camerota Wednesday. “He was on probation, but he was taken off. But in the state of Louisiana you can not carry a weapon because of his previous incident. He can not carry a weapon.” She was careful to note that Alton Sterling did not have a history of violence, though would not directly name that crime for which he had previously been sentenced.

In Madison, Wisconsin, activists are still trying to get a cop imprisoned for shooting teenager Tony Robinson to death seven years ago. After all, he was… wait for it: 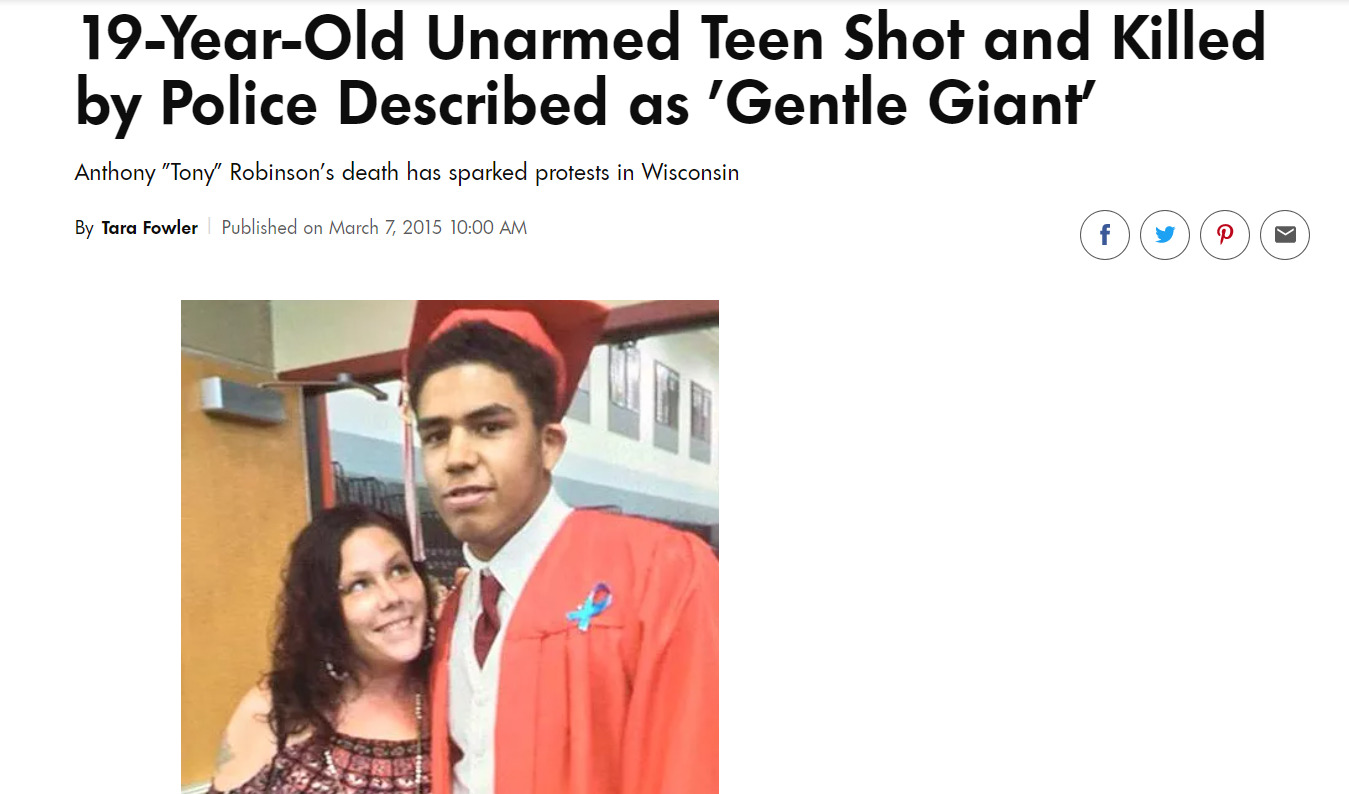 Uh oh! It’s that phrase again. You know where this is going:

Police said on the night of the incident, Kenny was responding to calls that Robinson was running in and out of traffic and had assaulted two people, and Kenny was attacked when he entered the apartment house.

That evening, Robinson told the girlfriend of one of the apartment tenants that he was ‘freaking out’ after taking mushrooms.

One 911 caller rang in to say Robinson had just tried to strangle him as he was fueling his car at a gas station. The man told police, ‘He looked like he was trying to kill me.’

He announced his presence and hears someone say, ‘Well, the police is here.’ Robinson then appears and punches Kenny in the head. Kenny told investigators he thought Robinson hit him more than once and that he was afraid he would fall down the stairs and end up incapacitated. He said he feared Robinson would then take his gun and kill him and whoever was in the apartment.

And so forth. 2019 Hanukkah stabbing suspect Grafton Thomas slashed up an entire congregation of Jews with a machete at a rabbi’s home in Monsey, New York. But fear not, citizen. While Grafton Thomas may come off a tad homicidal, that is not who he is.

To Paige, Thomas was always “a gentle giant with mental illness,” she said.

He is a vegan and a “germophobe” who incessantly washes his hands, Paige said.

Gentle giants don’t all have to be from one race, though:

A gentle giant. A teddy bear.

The sweet, but quiet, soul always ready to help.

This is how those who know Jesus Cartagena Jr. describe the 6-foot-6, 250-pound 20-year-old with jet black hair – an aspiring pharmacist who worked at a local hospital, had purchased his own condo and was taking classes at Central New Mexico Community College.

Sadly, this colossus of kindness had a weakness for knives. Specifically, using them on people:

But why wouldn’t one be a gentle giant just for the minor problem of knifing a couple people? Focusing on the one day Cartagena murdered people ignores the thousands of days where he didn’t murder anyone. On literally 99.99% of days, it’s all gentle, all giant.

And besides, two bodies isn’t even that many.

Erbie Bowser, the 44-year-old suspect in Wednesday’s shooting spree, was a certified special education teacher in the Mesquite School District from 2001 to 2010. Laura Jobe with the district says colleagues who knew Bowser are shocked.

“From what I’ve heard from those who knew him, he was kind of described as a gentle giant,” Jobe told KERA.  “He is a very large man and kind-of surprisingly was very soft spoken; very kind.  They describe him as a big, lovable guy.”

Just a great big lovable teddy bear. But hey, nobody’s perfect. Sometimes everyone has a bad day. Sometimes that bad day makes them lash out. And sometimes that lashing out takes the form of a murderous killing spree.

According to police, Bowser began his shooting spree around 10:30 p.m. at a home in the 7100 block of Long Canyon Trail in Dallas.  Two people, 43-year-old Toya Smith and her 17-year-old daughter Tasmia Allen were killed.  Police say Smith and Bowser were in a dating relationship, but Bowser was not related to anyone in the home.  Two children were also shot.

Bowser then traveled to a home about seven miles away in the 100 block of Galleria Drive in DeSoto. There, he tossed some type of explosive device into the home, police said, before opening fire again. In this shooting, police confirm Zina Bowser, 47, and her daughter Neima Williams, 28, were killed. … An unidentified 11-year-old boy and 13-year-old boy remain in critical condition.

Besides the whole “mowing down helpless women and children” thing, Bower was also a pervert.

Earlier in the trial, jurors heard Neima’s terrified 911 call where she is heard calling Bowser by name and begging repeatedly for her life.

She was shot and killed just steps from where her toddler son had been hidden under some coats. Bowser can also be heard on a 911 call, asking the whereabouts of Zina’s then 10 and 13-year-old sons.

Prosecutor Glen Fitzmartin [also] presented evidence that Bowser hid cameras in Smith’s home to secretly record her teenage daughter in the shower and in her bedroom.

But as the old saying goes, “let he who has not spied on a teenage girl in the shower before murdering four people in a violent rampage cast the first stone.” We’re pretty sure that’s somewhere in the Bible.

Man, just think about how bad things would be if they weren’t gentle.