“No government, any more than an individual, will long be respected without being truly respectable.” So said Publius at the conclusion of Federalist No. 62. Publius’s intent was to praise the virtues of having a small, aristocratic Senate as part of the new United States Constitution.

Well, let’s all hope Publius is wrong, because that Senate is on the verge of losing its respectability forever. Because in just three short weeks, it may be welcoming John Fetterman to its ranks.

NBC: "Can voters trust that you will be ready to do this job?"

Fetterman: "Yeah, of course," after reading the question off a giant MacBook that he needs to understand what is being said to him. pic.twitter.com/McBRfyd3R3

Fetterman sounds horrible. He's clearly not well and it's so bad that he makes Joe Biden sound like a Rhode Scholar. pic.twitter.com/vcZ5f7GhBo

The part-time mayor-turned-full time invalid is the narrow favorite to be Pennsylvania’s next United States senator.

#VOTER: "Are you afraid to debate #DrOz?"#JOHNFETTERMAN: *confused gibberish*

Fetterman has mostly hidden from public view ever since last May’s primary, as staffers try to conceal the devastating effects of a stroke he suffered at that time. Fetterman finally gave his first full sit-down interview, and promptly revealed that he can’t, technically speaking, understand human speech.

Fetterman couldn’t even make it through a basic, friendly interview with MSNBC: couldn’t hear, couldn’t understand.

He’s unfit to serve in the Senate. pic.twitter.com/GIApHtd2AS

We could bully Fetterman all day. But that’s not the point of this article. A million different publications have harped on Fetterman’s flaws as a person, candidate, and politician. Instead, we would like to reflect on the meaning of Fetterman being a major political candidate at all. Specifically, John Fetterman is the perfect symbol and representative of “democracy” as it exists in 2022 America.

In 1787, the fledgling government of the United States was failing. In Philadelphia, the delegates of the Constitutional Convention gathered to debate and define the structure of a new, stronger national government to replace the faltering Articles of Confederation.

One of the major changes the convention agreed upon was splitting the unicameral Congress of the Confederation into a new bicameral Congress, with a large and more democratic House coupled with a smaller, less democratic Senate. James Madison, “Father of the Constitution,” took the floor to explain his vision of the Senate’s purpose:

A people deliberating in a temperate moment … on the plan of government most likely to secure their happiness, would first be aware, that those charged with the public happiness, might betray their trust. An obvious precaution against this danger would be to divide the trust between different bodies of men, who might watch & check each other. … Another reflection equally becoming a people on such an occasion, would be that they themselves, as well as a numerous body of Representatives, were liable to err also, from fickleness and passion. A necessary fence against this danger would be to select a portion of enlightened citizens, whose limited number, and firmness might seasonably interpose against impetuous councils. … How is the danger in all cases of interested coalitions to oppress the minority to be guarded against? Among other means by the establishment of a body in the government sufficiently respectable for its wisdom and virtue, to aid on such emergences, the preponderance of justice by throwing its weight into that scale.

Elsewhere in the constitutional debates, Madison argued that “the use of the Senate is to consist in its proceeding with more coolness, with more system, and with more wisdom, than the popular branch.” By design, he said, the Senate would be “generally a more capable set of men.” During the same debates, John Dickinson argued that the Senate ought to “consist of the most distinguished characters, distinguished for their rank in life and their weight of property, and bearing as strong a likeness to the British House of Lords as possible.” 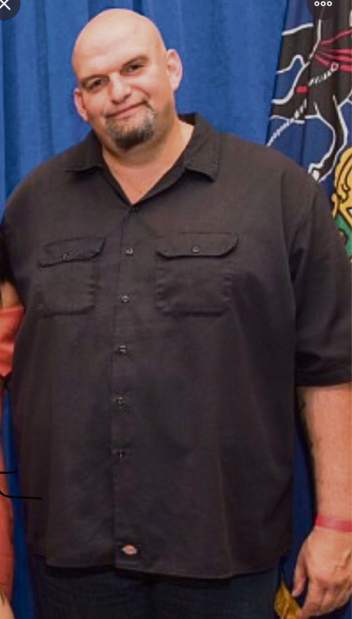 Fetterman’s shortcomings far exceed the limitations caused by his failing health. Fetterman could have two whole functioning brain hemispheres and he’d still be a disturbing joke of a public figure. When asked what problem he would fix first if he had a magic wand, Fetterman’s thought’s immediately jumped to “get all the murderers out of prison”:

INSANE: Democrat John Fetterman says if he had a magic wand to “fix one thing,” he would end “life without parole” for MURDERERS.

Fetterman claims it would “not make anyone less safe.” pic.twitter.com/OHryyEWYiP

Until his run for lieutenant governor, “Feederman” weighed an astonishing 417 pounds, so heavy that even the average American woman could fit inside him twice. In 2017, Fetterman started taking his weight seriously, dropping all the way to 270 pounds — a mere forty-two pounds overweight for his height! 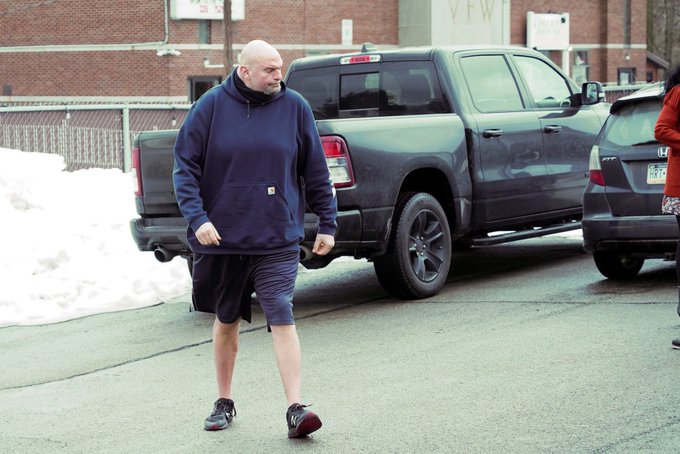 Fetterman lived off of his parents until he was 49 years old (by that age, Theodore Roosevelt was been president for six years, and JFK was dead for three), while he spent 13 years as the part-time mayor of Braddock, a Pittsburgh suburb with just 1,300 people. That’s right: despite the working-man, paycheck-to-paycheck image he cultivates, Fetterman’s parents handed him up to $54,000 per year for 13 years so he wouldn’t have to get a real job to supplement his part-time position as mayor. Furthermore, Fetterman lives with his wife and two children in a loft that his sister bought for $70,000 and then gifted him for a dollar. But it gets even worse. Fetterman frequently failed to even show up to more than a third of his town’s city council meetings despite not having a real job. Then, as Lieutenant Governor, Fetterman continued skipping work, often failing to show up to preside over the state Senate, which was one of his chief duties, according to the AP.

Fetterman’s official photo portrait as Pennsylvania Lieutenant Governor looks like an employee of the month headshot at a Jiffy Lube. 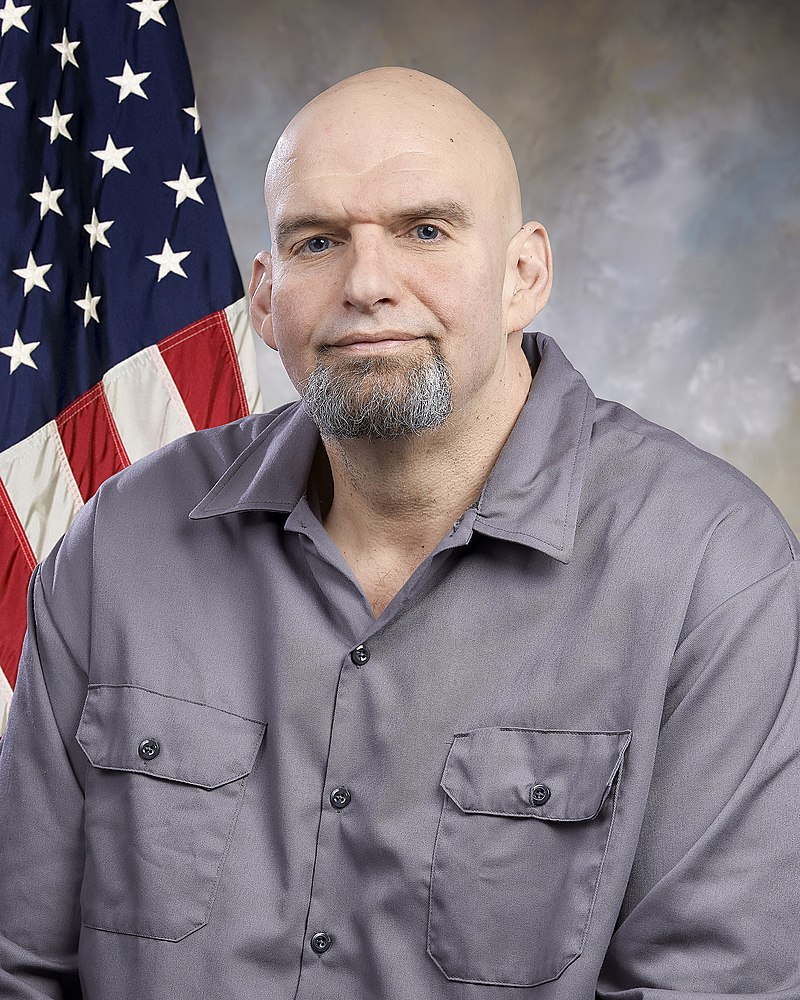 In Federalist No. 63, James Madison elucidated the importance of having a small senate, elevated above the rabble, for governing the fledgling American republic. One key advantage of the Senate, he said, was that it would lend American politics the stability and dignity needed to win the respect of other nations:

A FIFTH desideratum, illustrating the utility of a senate, is the want of a due sense of national character. Without a select and stable member of the government, the esteem of foreign powers will not only be forfeited by an unenlightened and variable policy, proceeding from the causes already mentioned, but the national councils will not possess that sensibility to the opinion of the world, which is perhaps not less necessary in order to merit, than it is to obtain, its respect and confidence.

The esteem of foreign powers? Does Fetterman even have the esteem of his own family members? Fetterman is ultimately just a failson on the brink of holding national office.

And most incredibly, none of this is being hidden. Fetterman’s campaign, apparently realizing that it’s futile to present their man as a strong candidate, have instead taken the approach of “Hey, voters, elect someone just as poor and messed up as you losers are!”

Dr. Oz is both perfectly healthy + extremely wealthy. Must be nice.

Who do you think is going to fight for them?

The Fetterman episode, as farcical as it is, says a great deal about America’s representative democracy in 2022.

American politics has always had populist streaks—Donald Trump himself is one of the most populist figures in American history. Thousands of politicians have successfully campaigned (and governed) presenting themselves as relatively ordinary people, sharing the values and concerns of the voters they cater to.

But conventionally, a populist still tries to look good. Donald Trump presented himself as a supremely talented businessman, the kind of person the masses aspire to be. Even many “ordinary” politicians still try to appear as functional members of their community. A populist campaigning against fentanyl will talk about seeing friends’ children die of it. They won’t be actual fentanyl addicts themselves.

But John Fetterman represents a different, even more base version of populism. He represents the populism that admits American society is falling apart, and leaders should be elected who reflect that collapse—in body, mind, and soul. John Fetterman’s Senate campaign doesn’t rest on sharing the values or experiences of the Pennsylvania public. It instead rests upon this premise: Hey, have you noticed that America is increasingly full of obese, slovenly, tatted up, jobless losers? Well hey, here’s the biggest obese, slovenly, tatted-up, jobless loser of them all!

And really, why not have that person be in the Senate? This is the other side of the cynicism coin. Fetterman is the perfect politician for America’s 2022 regime because he has essentially no independent agency. A barely-functioning recovering stroke victim with a life story of not having a job or failing to show up for work is the perfect lawmaker to simply be shuttled around and controlled by unelected handlers. He will be told where to go and how to vote. He will be a safe vote for the permanent power of the governing class that stands behind him. He will not get ideas of his own, he will not ideologically evolve, he will not rock the boat. In fact, he may not be capable of “rocking” at all.