“Our people have all left Drudge ... They like REVOLVER and others!”
President Donald J. Trump
“...many of Drudge's long-time readers have fled to Revolver News...”
Tucker Carlson, FOX News
Close No thanks, I don't want breaking news emailed to me
Revolver Exclusive: Kevin McCarthy Had More Than a Little Bit to Do With Rep. Yoho’s Groveling Apology to AOC

← Front page /
Revolver Exclusive: Kevin McCarthy Had More Than a Little Bit to Do With Rep. Yoho’s Groveling Apology to AOC
July 23, 2020 (2y ago) 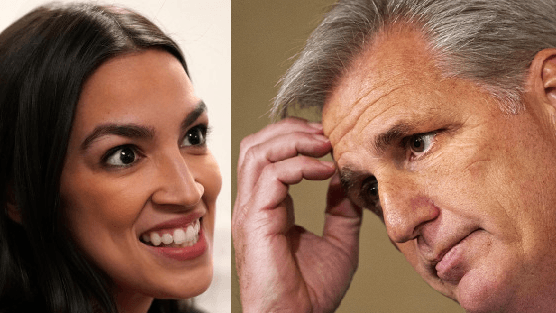 Many of you may have followed along or may have heard in passing about the small kerfuffle involving Republican Rep. Ted Yoho (R-FL) and Democratic Rep. Alexandria Ocasio-Cortez earlier this week.

Yoho was accused of calling Ocasio-Cortez a “f***ing b***h” after a confrontation over skyrocketing crime in New York City.

In a brief but heated exchange, which was overheard by a reporter, Yoho told Ocasio-Cortez she was “disgusting” for recently suggesting that poverty and unemployment are driving a spike in crime in New York City during the coronavirus pandemic.

“You are out of your freaking mind,” Yoho told her.

Ocasio-Cortez shot back, telling Yoho he was being “rude.”

The two then parted ways. Ocasio-Cortez headed into the building, while Yoho, joined by Rep. Roger Williams (R-Texas), began descending toward the House office buildings. A few steps down, Yoho offered a parting thought to no one in particular.

Yoho took to the House floor to offer an apology, which was swiftly rejected by Ocasio-Cortez, who accused him of “refusing to accept responsibility.” From Ocasio-Cortez’s Twitter:

Republican responds to calling a colleague “disgusting” & a “f—ing b*tch” w/ “I cannot apologize for my passion” and blaming others.

I will not teach my nieces and young people watching that this an apology, and what they should learn to accept.

Yoho’s meandering apology seemed forced and strained. It turns out, he might not have made it willingly.

REVOLVER EXCLUSIVE TIP: Multiple sources close to Rep. McCarthy’s office have informed Revolver News that it was McCarthy himself who demanded that Yoho apologize to Ocasio-Cortez for referring to the Antifa-sympathizing congresswoman as a “f*cking b*tch.”

“I think that when someone apologizes, they should be forgiven,” McCarthy told reporters at a press conference on Thursday.

“I watched that Congressman Yoho went to the floor and apologized not once but twice to the congresswoman from New York. I watched the majority leader of the House accept his apology,” McCarthy said.

“In America, I know people make mistakes, we’re a forgiving nation. I also think when someone apologizes they should be forgiven — I don’t understand that we’re going to take another hour on the floor to debate whether the apology was good enough or not,” he said. [The Hill]

As the country becomes more vulgar, there ought to be a premium placed on civility. Rep. Yoho probably should not have used the words he did.

However, the fact that Rep. McCarthy forced Yoho in a grovelling position, only to be spurned by AOC for more grandstanding, only reinforces the notion that establishment Republicans are playing by Marquess of Queensberry Rules, while the Democrats, and their loosely-affiliated paramilitary force Antifa, go straight for the jugular.

McCarthy appears to be carrying forward a long tradition of Republicans playing the Washington Generals to the Democrats’ Harlem Globetrotters.

As Revolver has previously reported, Kevin McCarthy is the leading figure behind many of President Trump’s primary endorsements of establishment GOP figures. Many of those figures have gone on to lose primary races to challengers who are more aligned with President Trump’s America First policies.

REVOLVER EXCLUSIVE TIP:  Much in the same way that Big Tech companies, with the support of SWAMP Republicans like Kevin McCarthy, outsource American IT jobs to inferior but more compliant labor from India and China, President Trump has effectively outsourced the decision making with respect to congressional endorsements to House Minority Leader Kevin McCarthy.

The only exceptions to this practice involve cases in which the President has a personal vendetta, as with Rep. Massie and, most notably, former Senator Sessions. [Revolver News]

McCarthy, who is currently waging a covert battle with neoconservative Senator Liz Cheney for the speaker position, has much in common with many Never Trump actors, but he is far sneakier and less overt.

Back in 2016, McCarthy told Republican colleagues in private conversation that he thought Donald Trump was being paid by Russian President Vladimir Putin.

McCarthy made the comments to House Speaker Paul Ryan and other party leaders in Washington on June 15, 2016 — a month before Trump clinched the Republican nomination, and just after news reports surfaced that Russia had hacked into the Democratic National Committee.

House Minority Leader Kevin McCarthy refused to endorse Rep. Steve King in his primary election and shot down the Iowa Republican’s claim this week that he’d get back his committee assignments.

So much for America being a “forgiving nation” where people who apologize “should be forgiven.” To call McCarthy a duplicitous snake would be insulting to snakes.

McCarthy has a long record of supporting the job-killing HR1044, “The Fairness for High-Skilled Immigrants Act.” This act is neither fair nor is it to help high skilled workers. Instead, it is meant to allow tech companies to exploit cheap Indian and Chinese data-entry labor at the expense of American college graduates in the IT sector.

Contrary to President Trump, McCarthy has also expressed willingness to erase American history by renaming U.S. Military bases—catering to the demands of the mobs who have burned down American cities, decapitated Christian statues, and defiled the American Founders.

Rep. McCarthy, of course does not exist in a vacuum. He is yet another speck in a larger constellation of establishment GOP operatives who have cozied up to the President, only to do everything they can to derail, defuse and otherwise co-opt the insurgent victory that propelled President Trump to the White House in 2016.