One of the most frustrating features of the Trump Administration is its tendency to hire, and even promote, personnel who are either indifferent or actively opposed to President Trump and the America First agenda he ran on in 2016.

Although the Administration remains crawling with such subversives, saboteurs, and so-called “Never Trumpers,” one especially interesting case is State Department employee George Kent.

George Kent was a star witness at the Trump impeachment hearings, in which he described Trump’s actions in Ukraine and the United States as “injurious to the rule of law.”

Highlights of his testimony include defending fellow star impeachment witnesses Marie Yovanovitch, Fiona Hill, and Lt. Col. Vindman, and accusing the President’s personal lawyer, Rudy Giuliani, of conducting a “campaign of lies.” Perhaps most damningly, Kent directly attacked President Trump on precisely the issue at question in the impeachment trial when he gave a second-hand description of President Trump’s phone call with Ukrainian President Volodymyr Zelinsky.

Trump’s July 25 phone call with Ukraine’s new president, Volodymyr Zelensky, was so unusual that a National Security Council official — Lt. Col. Alex Vindman, who also has testified for the inquiry — didn’t want to get into the details with Kent. That call is now at the heart of the impeachment inquiry.

“It was different than any read-out call that I had received,” Kent told investigators. “He felt — I could hear it in his voice and his hesitancy that he felt uncomfortable. He actually said that he could not share the majority of what was discussed because of the very sensitive nature of what was discussed.”

Kent told investigators that, based on his conversations with other senior American diplomats, Gordon Sondland relayed that Trump “wanted nothing less than President Zelensky to go to microphone [sic] and say investigations, Biden, and Clinton.” [Politico]

That Kent not only kept his job but was promoted after providing such impeachment testimony is a surprising and lamentable fact, especially given the President’s strong and largely successful commitment to clean house in the aftermath of impeachment proceedings in which many State Department officials connected with Ukraine and Eastern Europe testified as witnesses against the President.

It would be really great if the people within the Trump Administration, all well-meaning and good (I hope!), could stop hiring Never Trumpers, who are worse than the Do Nothing Democrats. Nothing good will ever come from them!

That a key impeachment witness against the President not only remains within the Trump Administration, but was actually promoted, is remarkable enough. He should be removed from his position just like his colleagues and fellow impeachment witnesses Yovanovitch, Vindman, and Taylor.

But once one takes a look at what George Kent’s job actually is at the State Department, the story becomes far more suggestive—even explosive. Kent just happens to be Deputy Assistant Secretary in the European and Eurasian Bureau. This bureau is generally known as the State Department hub for so-called “Color Revolutions,” through which the State Department, together with covert agencies and a constellation of allied NGOs influence, and at times overturn, elections in foreign countries. Indeed, one former senior state department official has told Revolver News that Kent is a “color revolution expert” — a designation that has been corroborated to Revolver by two current senior State Department sources.

Prior to his current role, Kent served as Deputy Chief of Mission in Kyiv, Ukraine (2015-18), working directly under the ousted star-impeachment witness Ambassador Yovanovitch. Prior to this, Kent was working as a “deputy political counselor” in Ukraine during the infamous “Orange Revolution” — arguably the most famous of the State Department and NGO-facilitated “Color Revolutions.” In essence, the Orange Revolution refers to a continuous barrage of protests, mass demonstrations, and other acts of civil disobedience in Ukraine in response to the contested election of Russia aligned Viktor Yanukovych, who defeated the Western-backed Viktor Yushchenko.

What is relevant here is not whether Yanukovych rigged the election, or whether he would have been a better ruler for Ukraine. What is relevant is that the State Department’s preferred candidate did not win, and the State Department, with the help of its constellation of friendly NGOs, helped to facilitate the overthrow of Yanukovych by contesting the legitimacy of the election, organizing mass protests and acts of civil disobedience, and leveraging media contacts to ensure favorable coverage to their agenda in the Western press — all tactics eerily similar to those used against President Trump beginning the day after he was elected.

Of course, the principal figure associated with this Orange Revolution in the US Government is none other than Victoria Nuland, who served as President Obama’s point person on Russia during the Color Revolution in Ukraine.

Nuland was a year into her role as Obama’s assistant secretary for Europe. She had been in Kiev, frantically working behind the scenes to put in place a new governing coalition in Ukraine as it teetered on the brink of revolution against its Russia-backed leader, Viktor Yanukovych. [Politico]

Nuland took the extraordinary step of personally speaking to the mass of protesters organized against the Russian-backed President Yanukovych.

Nuland’s highly symbolic appearance in the square came a day after Secretary of State John Kerry issued a strong statement, expressing the United States’ “disgust with the decision of Ukrainian authorities to meet the peaceful protest … with riot police…” [CBS News]

“Peaceful protest” sounds mighty familiar, doesn’t it? That’s because organizing mass demonstrations against a target government and criticizing and provoking that target government into cracking down on said protests is part and parcel of the Color Revolution playbook.

Careful observers of recent events will note that it is no coincidence that this is precisely the playbook being run right now in Belarus.

Indeed, the entire constellation of State Department-aligned and Atlanticist-aligned NGOs have been questioning in advance the legitimacy of the newly-elected Lukashenko, who won decisively with over 80 percent of the vote, compared to his rival, who received less than 10 percent.

These same State Department and NGO-aligned groups have been encouraging mass protests against Lukashenko. Perhaps most notably, they’ve referred to the demonstrators specifically as “peaceful protestors,” and used any attempts to control the riots as a pretext to further undermine the legitimacy of the target government.

"It is possible that #Lukashenko will lose the presidency in a matter of days, but it is also possible that he will bring the situation back under control, with all the brutality he has at his disposal," GMF's @JoergForbrig tells @EURACTIV: https://t.co/59wVasqxkL

Women in Belarus carried flowers and formed a long "line of solidarity" along a busy road in a peaceful protest on Thursday.https://t.co/RseYwcLTdA pic.twitter.com/GDcB7qo6HU

If the prominent use of women as demonstration props seems familiar, its because the Atlanticist networks tasked with Color Revolution operations have explicitly identified tactical “feminism” as a leverage point in undermining target regimes. Here’s one such acknowledgement from the German Marhsall Fund — a key node in the State Department-linked Color Revolution NGO Axis (more about them later). 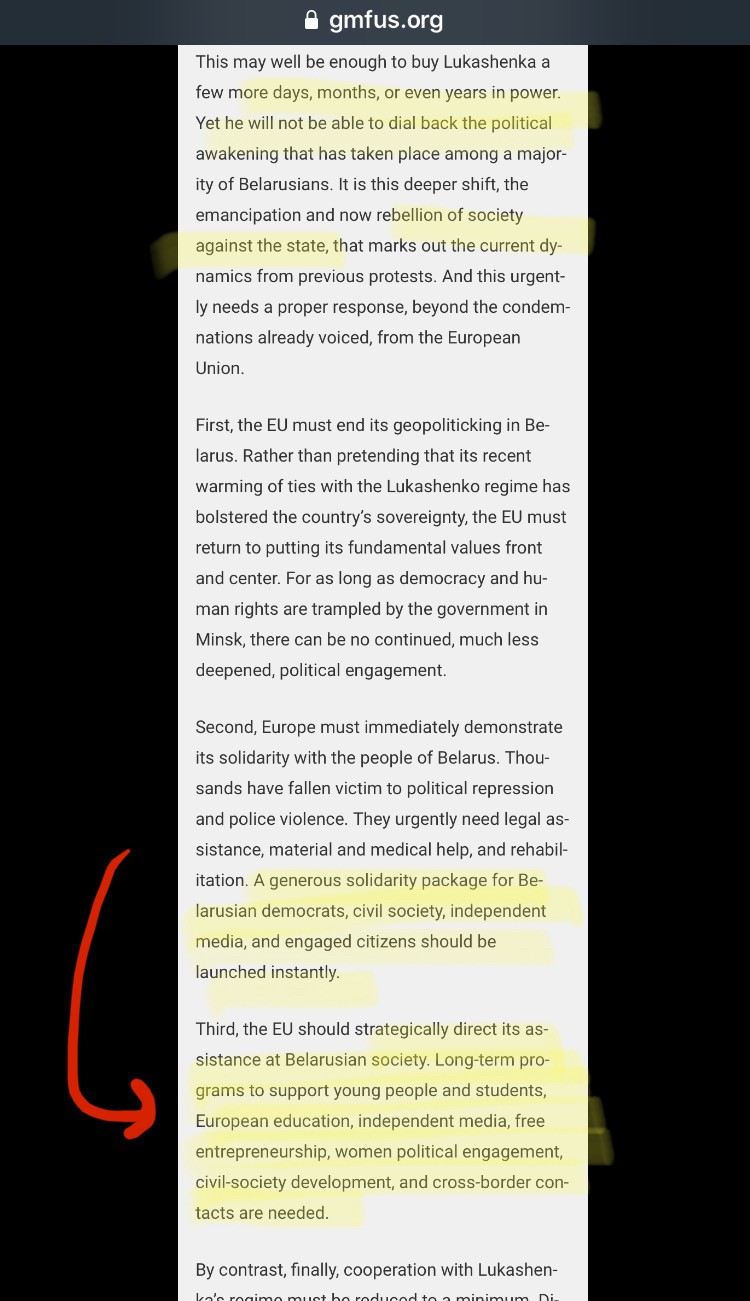 The similarity between the Atlanticist-backed Belarus riots and the way the organized ANTIFA and BLM protests operate in the United States is impossible to ignore. Indeed, many of the Color Revolution experts currently fixated on Belarus have explicitly made this comparison in relation to the United States. The Transatlantic Democracy Working Group (more about them later) is a deeply anti-Trump so-called “bipartisan” group that is essentially a Who’s Who of every influential Color Revolution regime-change NGO in the World.

More of a warning of why we need to defend our democracy. The slide to authoritarianism can be swift…

Let's hope that is not what we see in Nov. We can say this is the Ghost of Democracy's Future if we don't take a stand.

Many have noticed theoretical parallels and similarities between how US State Department and associated Atlanticist NGOs run color revolutions in foreign countries, and the sustained operations targeted against Trump in the United States. The case of George Kent — and many others to be exposed in this series — demonstrates that these similarities are not merely theoretical—they literally involve the same people! The very same people running cover revolution operations in Ukraine and Eastern Europe have been using the very same playbook to overturn 2016 and destroy the legitimacy of President Trump’s election.

And guess who runs the Belarus station at the State Department? If you guessed George Kent, the “color revolution professional,” you might be right.

Stay tuned for more explosive information in this series. Many more will be exposed (don’t worry, the receipts are already archived).