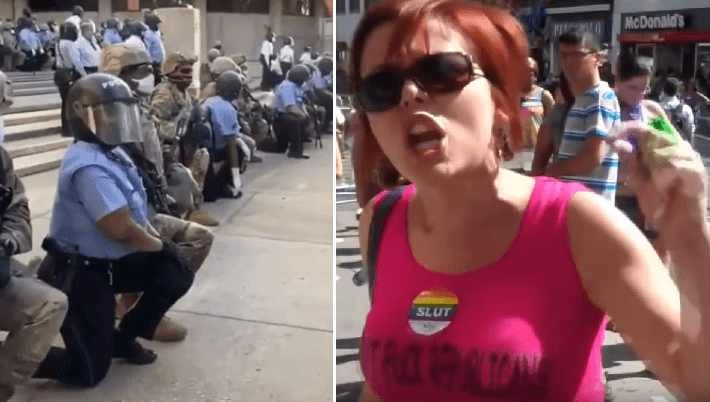 Over the weekend, a mob of BLM activists stormed into a Washington, D.C. restaurant. That much was unremarkable. Even in 2015, left-wing demonstrators were happily bothering people in public spaces with their “Black Brunch NYC.”

But Saturday’s harassment had a twist. The mob didn’t just annoy diners. They demanded they pledge fealty by raising their fists in solidarity with the movement. Those who refused were denounced and tarred as racists:

This is called disturbing the peace & is a criminal offense

“Think about the people who are not raising their hand.” Diners who kept their hands down were lucky to get away with mere verbal criticism.

If members of the right tried such a stunt, they would be shouted down and arrested. But they would likely never try it in the first place, because the right lacks the left’s belief in its absolute moral supremacy. The left can pull stunts like this with impunity, because they know the odds are minimal they will ever be punished for harassing the public. Recent events have demonstrated that the left is rarely ever punished even for committing more destructive crimes like vandalism, looting, or criminal assault.

There is only one conclusion we can draw from all of this. We currently live under a regime of left-wing moral imperialism.

As defined by the left itself, “moral imperialism is the imposition of a set of moral values onto a culture that does not share those values, either through force or through cultural criticism.”

In a recent interview on the Chris Buskirk podcast, former Duke Professor and White House speechwriter Darren Beattie explained why “moral imperialism” is so crucial to the success of the left:

Beattie: “Having the moral high ground gives you the confidence to hold frame in a discussion… Not only are you going to sit back & say it’s wrong — you are going to defend against it — with the same kind of conviction… that the left uses to destroy everything that is just" pic.twitter.com/P5osvXlSdG

In the past, the Western tradition allowed for a strong, confident conception of morality—of right and wrong. The tradition supplied both the concepts and conviction necessary to condemn clear injustices like murder, rape, and treason.

Today, though, the worst crime imaginable is not murder. In fact, the left routinely makes excuses for murderers. Instead, the moral arbiters of the left have decreed that “racism” is the most heinous crime imaginable.

Racism once meant overt discrimination or antagonism towards someone of a different race. Later, it came to include offenses like using slurs or indulging in racial caricature (stereotyping). Then, “racism” also came to include opposition to policies like affirmative action. Eventually, racism was also equated with support for race-neutral policies, like strict criminal justice or enforcing national immigration laws. Today, it is racist to oppose favored status for “oppressed” races, and any system that does not provide for statistically equal and representative outcomes is guilty of systemic racism. Anyone who supports such a system is themselves racist.

The definition of racism may always change, but the solution never does. The left must be given total power, and its enemies must be subservient or destroyed.

For years, with increasingly palpable desperation, Republicans have tried to defend themselves by copying the left’s attacks. Republicans aren’t racist, they argue, because Democrats are “the real racists.”

This attack has been recited for years. Dinesh D’Souza became a very rich man by making “Dems are the real racists” his core talking point. President Trump’s own campaign has generated tweet after tweet accusing Joe Biden of racism for supporting law and order and honoring the dead:

President Trump signed the first major reform to our criminal justice system in over a decade, helping to undo the damage that Joe Biden caused. #BlackVoicesForTrump #PromisesMadePromisesKept pic.twitter.com/WwiZHLZWUO

Byrd once led a KKK chapter with 150 members. pic.twitter.com/gcOlww8i0q

None of this copycat rhetoric ever successfully works to enact a right-wing agenda. So why does the right keep using it? Simple: Moral imperialism. The right has had its thought space thoroughly colonized by the left, just as the Spanish imposed their values on Mexico. The right cannot win, because they implicitly accept the values of the left. They will not win until that changes.

Today’s left is not well-intentioned. They are not merely misguided in the pursuit of moral goods. Today’s left pursues moral evils, and they’re not shy in telling you this. The left denies any differences between men and women. They want to mutilate your children if they deviate from predefined personality types. The left attacks marriage and the family, and celebrates deviancy and child abuse. They reject justice and accountability, and blame or exonerate based on group affiliation. The left attacks the successful and celebrates violent criminals.

Chiefly, the left seeks to upend traditional morality and replace it with “social” justice in order to indict American society as structurally racist, and the American people as hopelessly racist merely by virtue of the fact that they live in such a society. The goal is simply to discredit and destroy the moral safeguard of tradition in favor of a new morality and new tradition that empowers the left-wing managerial class.

This wave of moral inversion cannot be defeated by claiming that the left is failing to meet its own standards. It cannot be beaten by calling the left “the real racists” or by saying that those on the right are “the real feminists.” Their moral framework must be rejected entirely. Their cries of racism must be identified as disingenuous attacks by the immoral, who care not one bit for the long-term well-being of any race of people. The right must meet the left head-on with the goal of defeating and subduing it, and make a stand for virtue as its own end. For God, family, faith, reason, truth, justice, beauty, liberty, and law and order. The right must make a stand for civilization itself, on its own terms, with no concessions.

10 responses to “Revolver Analysis: To Save Civilization, Stop Kneeling Before the Left’s Moral Imperialism”