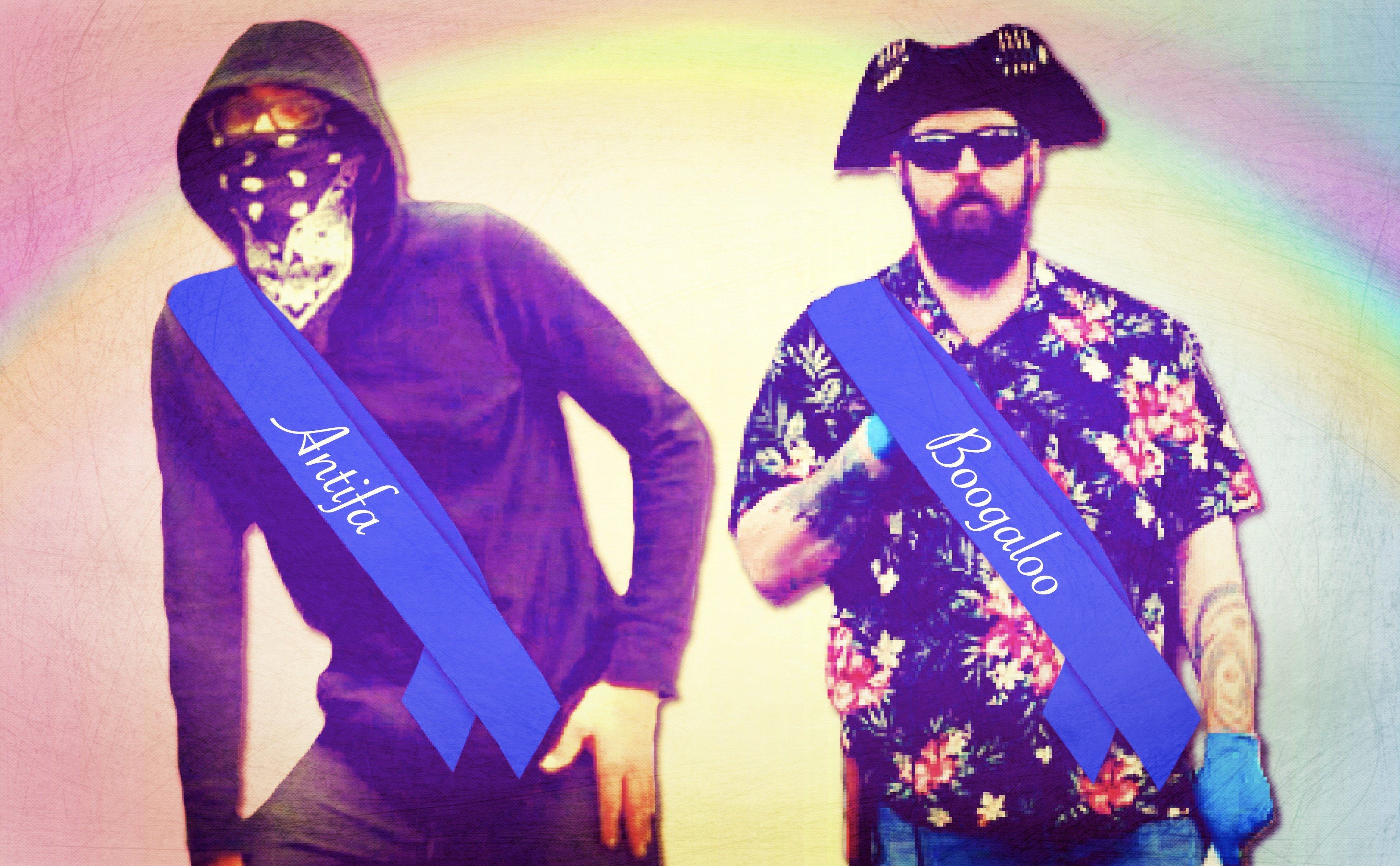 For five months, Americans have lived in terror of the left’s violent mobs, who have looted cities, ripped down statues, and even attacked police with the approval and endorsement of the Democratic Party. Now, with Election Day closing in, Democrats are trying to shift the blame for their violence onto the right. Their latest tactic is to blame the “Boogaloo Bois,” sometimes known more vaguely as the “Boogaloo movement.” According to the press, the Boogaloo Bois are right-wing extremists, and the ones really responsible for the violence in America’s cities last summer.

Another case of right wing domestic terrorism. Time for political leaders to cool the rhetoric of incitement. https://t.co/VEAWshf85w

This is a lie. The Boogaloo movement is not a “far right militia” or a network of “right-wing extremists.” To the extent the group has a coherent ideology at all, it is best described as a “woke” “anti-racist” group with a left-wing anarchist-libertarian twist. Though it is similar to Antifa in its “woke” “anti-racist ideology” and violence,  the Boogaloo Bois lack the political connections and trust funds of your standard Antifa member. This makes the Boogaloo Bois an ever attractive target to falsely frame as “right wing” as justification to sic the FBI, DHS, and other guard dogs of the corrupt ruling class against peaceful, law abiding conservatives under the pretext of combating “right wing terrorism.” Proving this is as simple as ignoring the press’s distortions and paying attention to what Boogaloo Bois actually do.

The Boogaloo movement is a broad, decentralized network of people who believe American society is headed inexorably toward a second civil war. Many Boogaloo believers are stockpiling weapons and ammo for this war, and according to the press, this alone is apparently proof positive of sinister “right-wing” intent.

But a simple look at the action of Boogaloo Bois who have been arrested shows that the dangerous ones are operating according to “anti-racist,” radical left-wing anarchist principles:

Here is arrested boogaloo anarchist Ryan Teeter clearly explaining he is on the side of BLM protesters & against the police pic.twitter.com/NOXQojdiaN

Well look at that pic.twitter.com/vWOGwJ5FKJ

If “right wing” could accurately describe a radically anti-racist, pro-BLM group that shot up a police station while shouting “justice for George Floyd” then the term right -wing has no meaning whatsoever. The entire premise is absurd.

Rather than admit this, the press routinely lies, using “far-right” as a dishonest trick to link Boogaloos with the left’s enemies. A recent article from the Star Tribune of Minnesota illustrates the press’s typical approach to covering Boogaloo business:

The Star Tribune repeats the claim in the second sentence of its article, once again calling Boogaloo extremists “far-right.”

But the details of the story show the exact opposite:

Ivan Harrison Hunter, a 26-year-old from Boerne, Texas, is charged with one count of interstate travel to incite a riot for his alleged role in ramping up violence during the protests in Minneapolis on May 27 and 28. According to charges, Hunter, wearing a skull mask and tactical gear, shot 13 rounds at the south Minneapolis police headquarters while people were inside. He also looted and helped set the building ablaze, according to the complaint, which was filed Monday under seal.

Two hours after the police precinct was set on fire, Hunter texted with another Boogaloo member in California, a man named Steven Carrillo.

“I did better lol,” Carrillo replied. A few hours earlier, Carrillo had killed a Federal Protective Services officer in Oakland, Calif., according to criminal charges filed against him in California.

Hunter had bragged about his role in the Minneapolis riots on Facebook, publicly proclaiming, “I helped the community burn down that police station” and “I didn’t’ [sic] protest peacefully Dude … Want something to change? Start risking felonies for what is good.”

“The BLM protesters in Minneapolis loved me [sic] fireteam and I,” he wrote on June 11. According to the complaint, “fire team” is a reference to a group he started with Carrillo “that responds with violence if the police try to take their guns away.” [Star Tribune]

In other words, the Boogaloo Bois helped burn down a police station, targeted police officers, proudly allied with Black Lives Matter, and embraced the left’s agenda of committing felonies to achieve amorphous “change.” There is no indication that any of this violence was intended as a “false flag.” Hunter and Carrillo were instead both earnest supporters of BLM’s anti-cop agenda.

Nothing about this is right-wing. In fact, there’s already a word for heavily-armed anarchists who support Black Lives Matter and love violence against police in the name of change: Antifa. While Boogaloo isn’t identical and doesn’t appeal to the same people, the overlap is too massive to ignore.

There are more examples. In August, two other Boogaloo Bois were arrested for allegedly plotting to aid Hamas. Sympathy for Hamas is common enough on the left, but unheard of on the right. Newsweek described the Bois’ other antics:

In an interview with CNN in June, [Benjamin Ryan] Teeter described how he made the trip to Minneapolis from his home in North Carolina with the aim of protecting protesters from police abuse and white supremacists during unrest in the wake of the killing of George Floyd.

Teeter said he was a non-voting “left anarchist” and a member of the LGBT community, adding, “people think I’m part of a Nazi group—I’m not.” [Newsweek]

As shown above, Teeter said the same thing on Twitter just days before his arrest.

Once again, a criminal member of the Boogaloo Bois is clearly aligned with the political left and Antifa. In another article released the same week, Newsweek went to the ridiculous extreme of insisting the Boogaloo Bois were right-wing even as the only ones they could find insisted they were not.

The word boogaloo has been adopted by white supremacists and other far-right extremists as shorthand for a future civil war, according to the Anti-Defamation League. The term refers to a “casual acceptance of mass violence” and may even signify an “increased willingness” to participate in such violence among some adherents, the ADL said.

But [Ryan] Balch, who described himself as a “Boog Boi” in a series of Facebook messages to the Sun-Times, said that there is a difference among those aligned with the far-right and the mission of the boogaloo movement he adheres to.

“We’re just trying to make it so we can help protesters when they need it without causing a confrontation,” Balch wrote in a message to Newsweek. While Balch told the Sun-Times that there is a “general consensus” among “boogaloo bois” that a civil war is “imminent,” he clarified that the group he adheres to believes the war wouldn’t have to do with race.

“The Boog boys tend to adhere to extreme libertarian and anarchist ideals so race is a non issue for us,” Balch told Newsweek. “There are Boog boys out there of all races and creeds.”

The estimated 32 boogaloo members present for Tuesday’s protests “all shared the same ideology” as Balch, he said. [Newsweek]

So, in other words, more than 30 Boogaloo Bois showed up in Kenosha to participate in the protests (and rioting) there. They called themselves anarchists, and explicitly denied any connection to Kyle Rittenhouse. Once again, they are clearly aligned towards the left, and once again, the “far-right” Boogaloos are totally missing.

In a profile of the Boogaloos published last July, the U.K.’s left-wing Guardian newspaper admitted that while white supremacists have appeared on Boogaloo-related Facebook groups, the group’s administrators instead “want to stand in solidarity with Black Lives Matter.” Ridiculously, in the same article former DHS analyst Daryl Johnson claims that Boogaloo is right-wing because it is “primarily white.” It’s no surprise that Johnson was pushed out of DHS a decade ago for obsessively claiming that the Republican Party was stoking domestic terrorism.

Boogaloo Bois show up at the same protests as Antifa. They join in the same anti-police rhetoric and violence as Antifa. They have the same anarchist attitudes, and they have the same posture toward Black Lives Matter. So what makes them different at all? Primarily this: Antifa is already known as left-wing, while Boogaloo is unknown to the public. By branding it as right-wing, the press can continue to erase the real history of the Summer 2020 riots and spin them as the product of right-wing agent provocateurs rather than the left-wing foot soldiers who are actually to blame.

But the mainstream press’ disingenuous characterization of the Boogaloo Bois points to something far more dangerous than typical media interference for Democrats and the radical left. This false characterization of Boogaloo Bois as a “right wing” group plays into an emerging narrative embraced by increasing swaths of the FBI, DHS and other government agencies, namely, that “right wing terrorism” is the number one national security threat. This is as ridiculous as it is dangerous. When a group actually is violent, it turns out almost always to not fit any reasonable definition of “right wing.” By formulating “right wing terror” as a real threat, the media and its complicit agencies in our national security bureaucracy redirect the force of our national security apparatus against those with “right wing” views, which all too often in practice simply means opposition to open borders and a support for traditional values.

The overwhelming majority of American patriots simply want a healthy nation run by an intelligent, competent, and moral ruling class that actually cares about its citizens, rather than by a rapacious oligarchy that puts the interests of the citizens last. They do not sympathize with ridiculous and destructive movements like the Boogaloo Bois, but rather view them as the product of the dysfunction and degeneracy that they oppose — and shame on any dishonest journalist who suggests otherwise.