Revolver News recently obtained screenshots of never before released e-mails that raise serious questions regarding the ethics, security, and legality of Hunter Biden’s business dealings, particularly in China. Although Revolver staff have not yet cross-referenced the screenshots to the hard drive, we can with an extremely high degree of confidence attest to their authenticity. 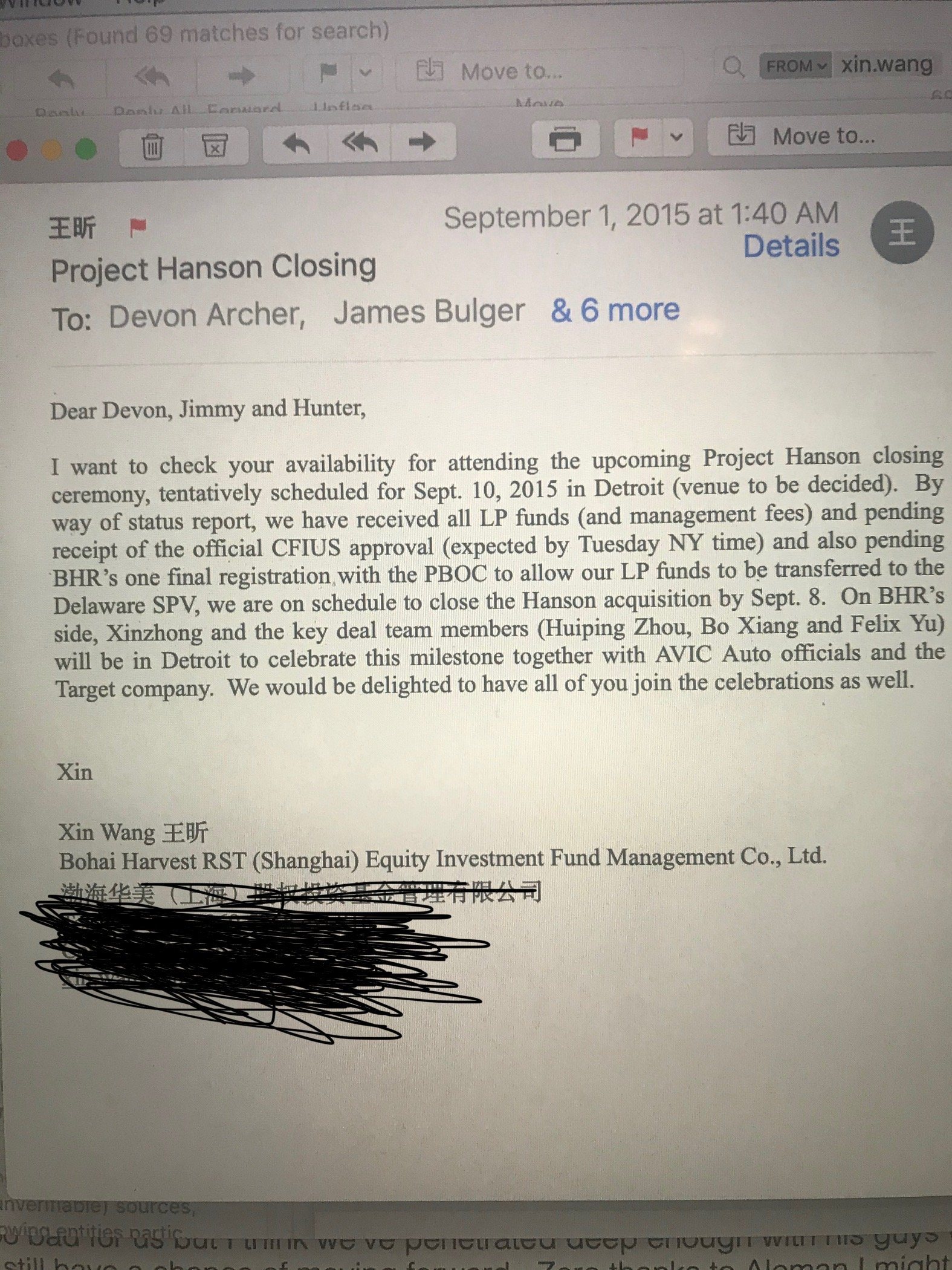 The above is an e-mail from Xin Wang, a managing partner of the private equity firm Bohai Harvest (BHR), to Devon Archer, James (Jimmy) Bulger, Hunter Biden, and other business associates. Revolver cited a report on BHR in an earlier article on Hunter Biden’s suspicious dealings in China:

There is no apparent reason for HUNTER’s participation in the BHR partnership other than political payoff and influence. Virtually all financial investors or partners are state policy entities, state owned entities, or only nominally private. The investments flow primarily to Chinese state backed projects or firms. The financial terms, where we have been able to locate specific deal terms, engage in non-normal business practices designed to funnel fees and assets to benefit a specific party

BHR is a state managed operation. Leading shareholder Bohai is a Bank of China subsidiary, and BHR’s partners are Chinese State Owned Enterprises (SOEs) that funnel revenue/assets to BHR. [Revolver]

For those unfamiliar with Hunter’s business partner Devon Archer, all one needs to know is that a federal court recently reinstated a fraud conviction against him. James Bulger, the other business partner on the e-mail, is the nephew of the infamous late Irish mafia boss Whitey Bulger.

The email in question pertains to the closing of a deal that requires approval by the Committee on Foreign Investment in the United States (CFIUS) — a review process required for foreign investments that might pose a national security risk. That this deal obtained CFIUS approval says more about the people involved than the safety of the deal from a national security perspective. At the time of the deal, Hunter’s business associate Christopher Heinz’ step-father, John Kerry, was Secretary of State. Hunter’s father was the Vice President of the United States.

The e-mail also makes reference to a Delaware based SPV (Special Purpose Vehicle) as part of the celebrated deal. Although the e-mail is dated September 2015, it is important to note that Beau Biden, Hunter’s late brother, had been Attorney General of Delaware until January of 2015 — perhaps during the early stages of the deal.

The questions then arise: given these political connections, what if any influence did they have on BHR’s ability to pass the CFIUS process? Did any of the connections mentioned use their influence illegally to influence this process? Perhaps more scandalous than the possibility of illegality is the possibility that all of this was legal. Indeed, it is simply absurd that a national security review would be subject to such egregious conflicts of interest. But this is just business as usual in Joe Biden’s America. This email is again from Xin Wang, partner at BHR, and is addressed again to Hunter (on cc), James Bulger, and Devon Archer.  Xin appears to be giving the recipients in question inside information regarding an investment auction. This raises questions not only regarding how often Hunter and his associates would receive inside information from Xin, but the provenance of that information. Given BHR’s effective state-owned status in China and its role in foreign influence, one wonders how much if any of this information may have been obtained through Chinese corporate espionage or industrial tradecraft.

Another e-mail of interest raises some suspicion about a number of major investment enterprises: 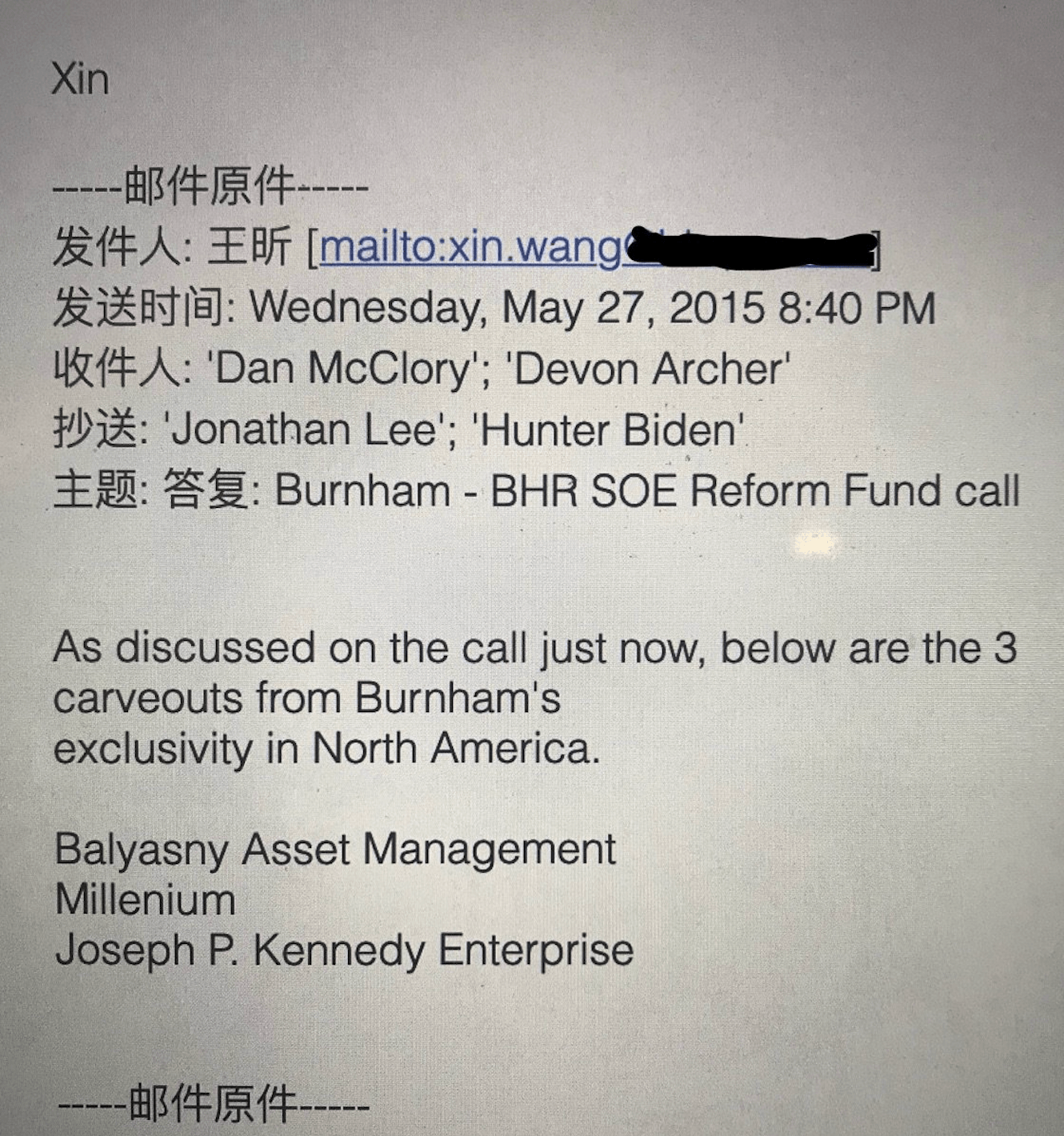 Balyasny, Millenium and Joseph P. Kennedy Enterprises are all major financial firms. One wonders why they would be singled out in this context as having the privilege of carve-out deals with BHR. Revolver staff are presently investigating ties between these firms and the Bidens and encourage readers and journalists alike to do the same. Be sure to also look into Dan McClory, an American investment banker who seems to have been closely involved in these dealings (at the time with the mentioned firm Burnham Securities).

Given that the FBI, which has had possession of Hunter’s hard drive for almost a year, appears to be asleep at the wheel — perhaps it is time for the SEC to take an active interest in the deals and investments detailed in Hunter’s trove of e-mails.

It is of course entirely possible that no illegal activity was involved in this process — if true, this in itself would be a scandal.  In Joe Biden’s America, it is simply business as usual for the relatives of powerful political officials to sell their influence to the highest bidder, no matter the ethical, economic, and national security implications.