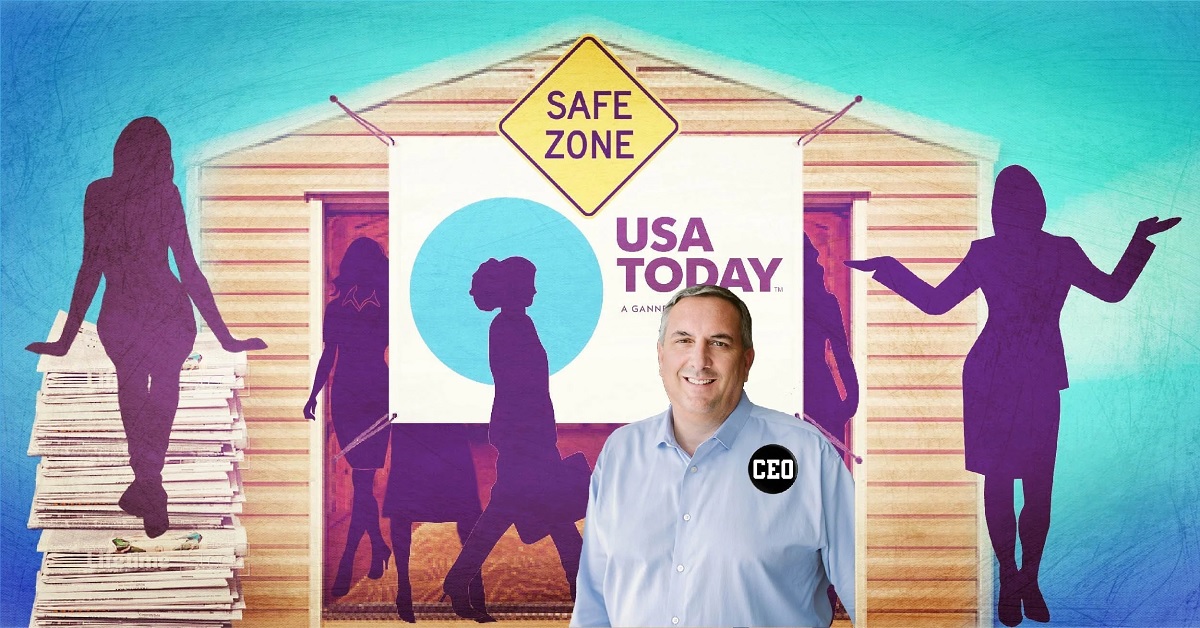 From the Soviet Union to Vietnam to the Black Lives Matter riots, the American press has routinely run interference for the enemies of the American public.

But now they’ve learned to copy the tactics of America’s foes, too. Just like Al Qaeda and ISIS used human shields to protect themselves from reprisals, the American press hides behind women and children to attack the MAGA movement with impunity.

The most recent example of this shameful practice comes courtesy of USA Today CEO Mike Reed, who recently shielded himself behind defenseless women and children (whom he labelled “journalists”) to write a piece attempting to deprive Trump supporters of effective legal representation.

On Sunday, USA Today published a hideous article whose only purpose was to undermine the constitutional rights of Americans. 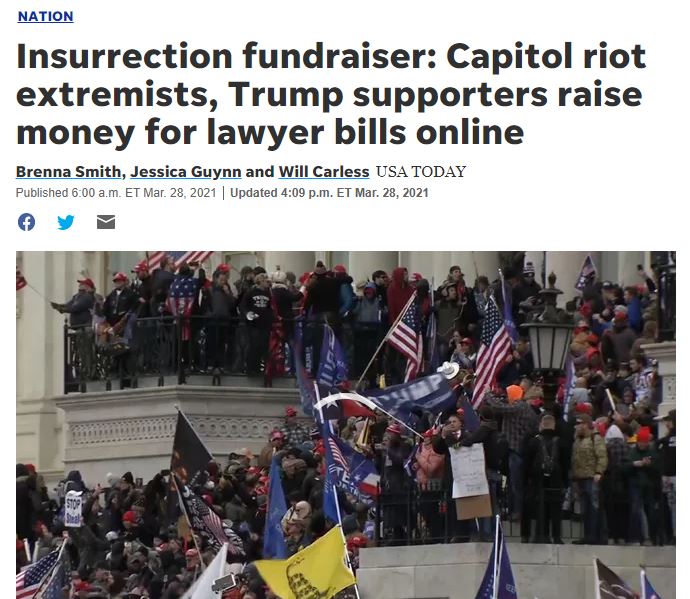 Defendants accused in the Capitol riot Jan. 6 crowdfund their legal fees online, using popular payment processors and an expanding network of fundraising platforms, despite a crackdown by tech companies.

The Capitol riot extremists and others are engaging these companies in a game of cat-and-mouse as they spring from one fundraising tool to another, utilizing new sites, usernames and accounts.
In one case, a crowdfunding website set up in late 2020 has been adopted by a defendant charged with storming the Capitol, who used it to raise almost $180,000. His was one of eight fundraisers on the site as of last week, and his donations accounted for 84% of the money raised on the platform.

The trend isn’t limited to extremists connected to Jan. 6. Neo-Nazi Paul Miller has crowdfunded legal fees through Cash App and asked for Bitcoin donations, even after federal authorities arrested him this month for being a felon in possession of a firearm.

“It’s so predictable, and it’s never going away,” said Megan Squire, a computer science professor at Elon University who has studied how extremists raise money online. “Whenever there’s money involved, it’s never going to stop; there will always be something new that pops up.” [USA Today]

Hundreds of Americans have been charged with crimes relating to the January 6 Capitol incursion. Many of them are poor or bankrupt and most of them are charged with purely non-violent offenses. So naturally, some of them have tried to raise money online for the legal defense attorneys they have a constitutional right to hire. Last summer, a future American vice president raised money to bail out sociopathic looters and arsonists, so there should be little controversy about the right to defend against one of the most politically fraught prosecution campaigns ever.

But no. The transparent purpose of the USA Today piece was to urge Big Tech companies to shut the fundraising campaigns down and deprive American citizens of the ability to defend themselves from criminal charges. USA Today even bragged of its success in getting the campaigns shut down in the story itself:

Soon a PayPal account took its place. PayPal caught that and removed it, too. [USA Today]

Congratulations on using your new journalistic platform to try to pressure tech companies to terminate the ability of impoverished criminal defendants to raise money for their legal defense from online donations. You're well on your way upward in this industry for sure: https://t.co/pvpmX3DaaW

Seems like legitimate criticism, no? Not so fast! A Sacred Band of Twitter personalities attacked Greenwald and any who supported his criticism. They said that Greenwald, by standing up for the right of Americans to a lawyer and a fair trial, was actually engaging in harassment of a young journalist. Possibly deadly harassment.

He's not just dunking on her. He's knowingly driving a right wing hate mob to attack her, and quite possibly threaten her life. https://t.co/XU21Eel991

I’ve known @brenna__smith for a while now and she is an excellent journalist. Nothing excuses this sexist barrage of vitriol unleashed against her reporting esp when she’s an *intern*, by two male “journalists”. Here is her article in Q:https://t.co/wACQEwttbl pic.twitter.com/oNvudzefZG

what kind of grown adult speaks this way to random young women doing their job.. it’s sickening. love this cute industry where harassment is supposedly par for the course. pic.twitter.com/aVsPosKmJ3

Expect we’re going to see a lot more good work from this byline. Sorry that this beat comes with constant harassment, but glad bright young reporters like her aren’t scared off by the craven men who make a living from trending on this stupid website. https://t.co/JE5XJtLicE

And so on, ad infinitum. You see, the author of the USA Today piece, Brenna Smith, was an intern. In contrast to normal journalists, who print lies and propaganda for globalist masters at slave wages, Smith was doing the same for a chance to print lies and propaganda at slave wages. Despite that, Greenwald and her other critics were happy to treat Smith like a full-fledged adult responsible for her own actions and writings. But this, they were told, was harassment of the most violent sort. Besides being an intern, Smith was also a woman, so attacking her was an atrocity.

This strategy has been trotted out repeatedly in the past few months, always to defend bad or unethical reporting. Taylor Lorenz lied repeatedly about what Marc Andreesen says on the Clubhouse app. In the past, that was called “slander” and reporters were “fired” for it. Now, it’s Lorenz herself who is the victim. When Tucker Carlson criticized Lorenz during a show in early March, The New York Times retaliated with a statement denouncing Carlson, while the International Women’s Media Foundation made it clear that any criticism of Lorenz put her at risk of a premature and violent death.

After tweeting about her experience with online violence against women on International Women’s Day, Lorenz was subjected to virulent online attacks, exacerbated by repeated coverage by Fox News’ Tucker Carlson. … Research shows these attacks can move offline through doxxing, stalking and physical threats.

Carlson’s commentary is a deliberate, deeply dangerous effort to mobilize harassment toward Lorenz. Coordinated attacks against women journalists by major news networks not only threaten a journalist’s livelihood, but her life itself: online violence is real violence with real consequences.

Lorenz is a legitimate journalist whose work should be applauded, not attacked. Women journalists must be able to do their jobs without fear for their lives – we stand with Lorenz and call for an immediate end to this violent behavior. [Facebook]

Similarly, last fall Carlson and Revolver exposed NBC’s Brandy Zadrozny, who professionally doxes people for ideological crimes. Sure enough, criticizing Zadrozny’s reporting was cited by other media hacks as evidence of a “pattern” of sexist harassment. 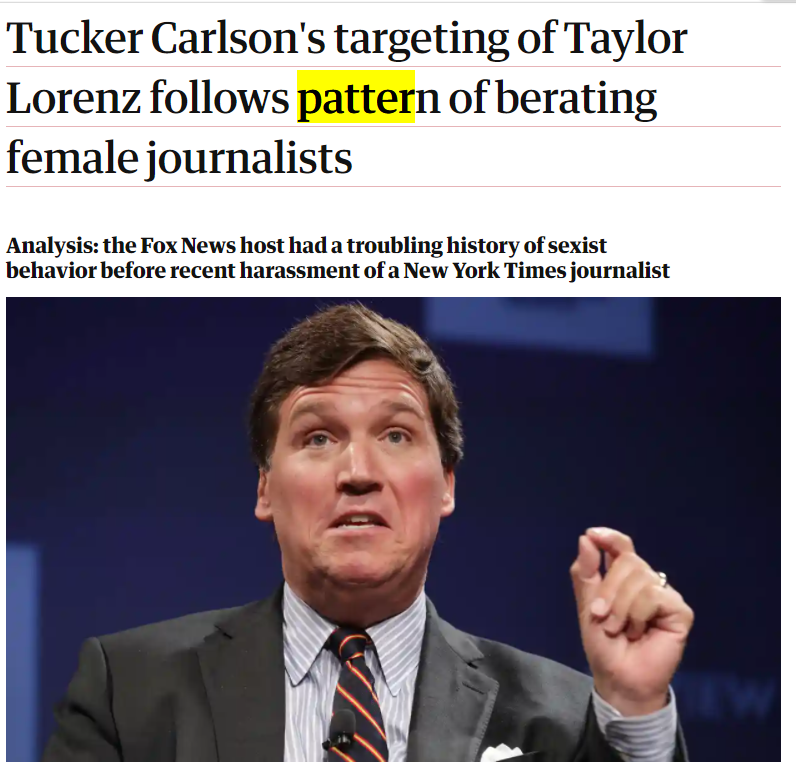 Instead of disputing this narrative, then, Revolver is going to embrace it. Can the lived experience of so many people be wrong? Instead, Revolver will take them entirely at their word. This being the case, it’s entirely clear who needs to be punished: The editors and publishers at USA Today, The New York Times, NBC, and the rest.

It is a rule of modern society, a part of our unwritten “Geneva Conventions,” so to speak, that any woman, no matter how loud her voice or how powerful her platform, is so vulnerable and so fragile that she cannot be criticized. Criticizing women reporters in any way, no matter how egregious their behavior or dishonest their prose, is a violent, nay, deadly act of harassment.

Accepting that to be the case, then, morally speaking, Gannett CEO Mike Reed and USA Today editor-in-chief Nicole Carroll are on par with Hamas terrorists who stash weapons in schools and hospitals. The paper may refer to Brenna Smith as an “intern.” In a more honest epoch, perhaps she would be called a “child soldier.”

Any journalist who publishes controversial material on politically loaded topics is inevitably going to be attacked. USA Today publishes Smith, NBC publishes Zadrozny, and the New York Times publishes Lorenz, knowing and in fact eagerly anticipating that their work will draw criticism. That criticism can then be denounced as dangerous, even homicidal harassment.

By their own standards, these outlets are taking vulnerable women and putting them in grave danger. It’s like a parent dolling up their 14-year-old and letting them travel with Bill Clinton to Jeffrey Epstein’s private island.

Why do they do it? For the same reason Hamas keeps children close to its rocket sites. They are trying to block retaliation, while ensuring that if they are attacked they can exploit the reaction for maximum political leverage. Reed and Carroll are using Brenna Smith as a human shield to attack the American Constitution and the MAGA movement. They swoop in and use malicious, agenda-driven sham “journalism” to get tech companies to quash the constitutional right to legal representation and a fair trial. Then, when others call out what they’re doing, they hide behind an “intern” who is declared immune from all attacks, like a Red Cross hospital with $50,000 in student loans.

It’s a stunt to avoid ever being held responsible for their own unethical political activism masked as “reporting.” For both newspapers and Hamas, it’s a sordid, sinister tactic, the kind of thing you’d expect from a failing company like Gannett.

It’s unclear just how far this immunity can be stretched. Brenna Smith is a 20-something intern, but Taylor Lorenz is 36, and was born closer to Harry Truman’s reelection than today. Don’t bring that up to her though, she’s a bit touchy about it.

I love how I went from a “very young reporter, much younger than most people at the NYT” to “middle aged” in a matter of weeks pic.twitter.com/bYDB1zBQkc

Evidently, though, her sheer imbecility and lack of professionalism earn her the right to be treated as if she were 20 years younger. So, if 36-year-old women are too fragile to criticize, does the same go for Nicole Carroll? If they wanted to try, they could probably get away with it. But why bother? Just like Hamas never had trouble recruiting new suicide bombers, America’s left-wing newspapers never have difficulty finding more Twitter attention whores happy to endure “harassment” for the cause.