A 9/11-style committee to investigate the January 6 Capitol incursion may be imminent.

The House passed a bill Wednesday authorizing a bipartisan, independent commission to investigate the Jan. 6 pro-Trump assault on the U.S. Capitol, but the proposal could stall in the Senate after GOP leaders in Congress and former President Donald Trump urged Republicans to reject it.

The legislation was the product of negotiations between the chairman of the House Committee on Homeland Security, Democrat Bennie G. Thompson of Mississippi, and the panel’s top-ranking Republican, John Katko of New York. Modeled on the probe carried out by the 9/11 Commission following the 2001 terrorist attacks, the panel would have five members appointed by Democratic leaders and five by Republican leaders, with shared responsibility for issuing subpoenas.

“I strongly believe this is a fair and necessary legislation,” Mr. Katko said before the vote Wednesday. “I encourage all members, Republicans and Democrats alike, to put down their swords for once, just for once, and support this bill.” [WSJ]

Despite the heroic opposition of figures like Matt Gaetz, and the less heroic but still welcome opposition of House Minority Leader Kevin McCarthy, 35 House Republicans joined with the Democrats Wednesday to approve the commission’s creation. The measure now goes to the Senate. If ten Senate Republicans defect (or if Democrats decide to trash the filibuster for this), the commission will happen.

American patriots are justifiably wary of creating this kind of commission. Revolver itself has previously warned about the dangers it could pose. Merely by existing, it would legitimize insane comparisons with past American events, like the Kennedy assassination or 9/11 (the attempt to brand it as “1/6” does the same). Plus, anything that Liz Cheney is smugly celebrating on Twitter should give cause for alarm.

Photos from Statuary Hall & the Rotunda on the night of January 6th after these brave Americans fought to defend the Capitol. What happened that day must never happen again. I urge the Senate to pass the bipartisan 1/6 commission bill. Some things must be above politics. pic.twitter.com/CNSkXAfOqo

The first step to making sure the commission is handled properly is not to focus on the wrong things. In his show Tuesday night, Tucker Carlson made the case that this commission will only be legitimate if it also investigates the looting and mayhem caused by Antifa and Black Lives Matter over the past year. This has been a common line, so common that even Kevin McCarthy embraced it in his Tuesday statement.

[T]he renewed focus by Democrats to now stand up an additional commission ignores the political violence that has struck American cities, a Republican Congressional baseball practice, and, most recently, the deadly attack on Capitol Police on April 2, 2021. The presence of this political violence in American society cannot be tolerated and it cannot be overlooked. I have communicated this to our Democrat colleagues for months and its omission is deeply concerning. [Office of Kevin McCarthy]

We at Revolver have tremendous respect for Tucker Carlson. The desire to shine more attention on the mass violence perpetrated by Antifa and BLM with the often-explicit endorsement of America’s ruling regime is understandable. But in the case of a January 6 investigation, Revolver sees such a demand as misguided.

Pairing a January 6 investigation with an inquiry into the mass riots of last summer implicitly accepts the establishment’s framing of events.

First, it concedes that January 6 by itself was equal in importance to months of rioting and looting which caused dozens of deaths and billions of dollars in damage. It admits that the so-called “insurrection” at the Capitol was a crisis on par with million of Americans being terrorized while their leaders pulled back the police and abandoned them to their fate. It equates an event of (accidental or deliberate) poor police crowd control with a months-long operation that was cynically stoked by the left’s institutions to tear apart the country, degrade institutions, hoard power to themselves, and of course eject President Trump from office.

This framing should not be conceded. January 6 and the Summer of BLM are not equivalent. The BLM riots were vastly worse. They should absolutely be investigated and investigated separately.

Revolver and other reporters have thoroughly trashed the original, bogus, self-serving narrative of what happened on January 6th. There was no “insurrection,” no “assault on our democracy,” at least not from MAGA protestors. Far from being bludgeoned to death, as The New York Times sensationally claimed, Officer Brian Sicknick suffered no injuries in the riot and died of a stroke. The only lethal violence was from an unnamed officer, firing through the neck of unarmed patriot Ashli Babbitt. The whirlwind of lies spun up around January 6 from the first minutes after it happened amount to a “MAGA blood libel”.

Only the silence and cowardice of Republican leaders can stop the above case from being made directly to the American public. The January 6 commission would be an opportunity to change that. And it will be easiest to do that if the commission does not squander energy on the riots of 2020. If BLM and Antifa are included within the commission’s purview, then the temptation will be too strong for the Republican members to focus entirely on that, and simply try to beat Democrats in an outrage contest. That would be a mistake.

Instead, a commission narrowly focused on the events of January 6 would give Republicans a chance to aggressively probe at the power structures of the Globalist American Empire.

They could bring in D.C. medical examiner Francisco Diaz and find out why it took him three months to issue a report on Officer Sicknick’s cause of death. They could demand that the FBI come forward to testify about its half-baked investigation of the Capitol “MAGA pipe bomber” for whom DNA and cell phone evidence apparently does not exist. Capitol Police aren’t subject to FOIA requests, but a specially empowered committee could demand whatever it wants, like all the video footage of January 6 that they are refusing to release.

In fact, the committee would also be empowered to specifically request the underlying intelligence that American intelligence agencies use to perform their work. 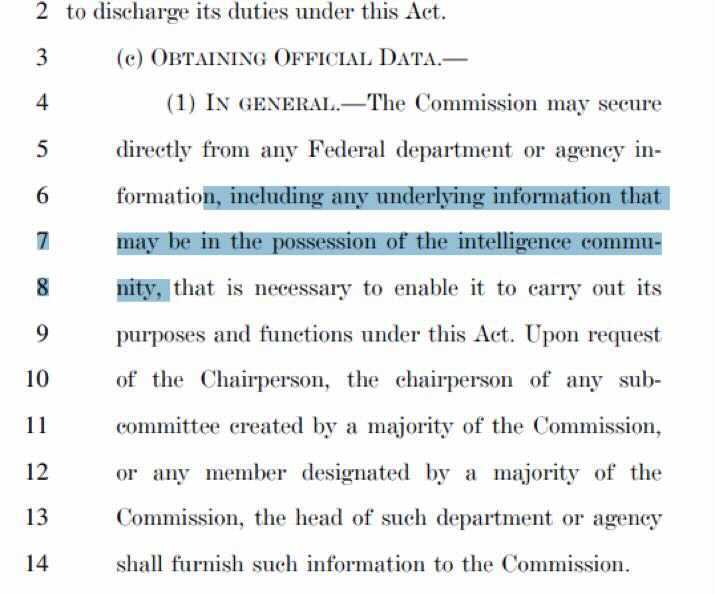 The FBI, DOJ, DHS, NSA, DoD, and other agencies in the alphabet soup of the federal government are overwhelmingly staffed by, controlled by, and loyal to the Globalist American Empire.

The FBI is all but openly bragging about using unprecedented surveillance technology to hunt down and crush glorified trespassers:

The federal documents provide a rare view of the ways investigators exploit the digital fingerprints nearly everyone leaves behind in an era of pervasive surveillance and constant online connection. They illustrate the power law enforcement now has to hunt down suspects by studying the contours of faces, the movements of vehicles and even conversations with friends and spouses. [Washington Post]

When the Mueller investigation tried to launch a politically-motivated take down of President Trump for “collusion,” it instead blundered into revealing the biases and criminal behavior of the agents doing the investigating. The same sort of own-goal is possible with January 6, if aggressive investigators send out the right subpoenas. These investigators could also probe the rapid, coordinated mass censorship wave that was launched within hours of the Capitol breach — a totalitarian crackdown that censored Parler, the U.S. president, and countless others.

For that matter, the Commission could be used to probe the killing of Ashli Babbitt, an unarmed Trump supporter who was the only person actually killed at the Capitol.

Or how about using the Commission platform to ask why there was such lax, even non-existent security at the Capitol that day? Who ordered the lax security and why? What foreknowledge, if any, did the Government have about an upcoming protest that might require some security?

By all indications, Capitol Police actually welcomed protesters into the Capitol.

Exclusive video obtained by American Greatness shows USCP officers talking with January 6 protestors inside the building that day, giving the ok to enter and peacefully protest.

Properly handled, a full commission on the Capitol incursion can be a tremendous boon for America First conservatives, nationalists, and supporters of President Trump. A wisely-managed commission would make it clear that January 6 was fundamentally non-violent, and that from the very beginning the entire incident has been manipulated by corrupt authorities to serve as a blood libel against American patriots and justify stripping them (and all Americans) of their basic liberties.

But there is no need to stop there.

Besides investigating the events on and after January 6, the commission will also have the power to look into events leading up to it. President Trump was impeached a second time because he supposedly pushed the “big lie” that the 2020 election was stolen. But of course, the real big lie is that the 2020 election was transparent and fair in the first place. Instead, coronavirus was used as an excuse to dramatically change electoral practices at the last minutes, and an iron triangle of media pressure, Big Tech censorship, and Department of Justice threats have stifled discussion of what happened, and crush state-level legislation the would prevent it from ever happening again.

This lie is a bigger one than any allegedly told by President Trump, and the commission is the one impossible-to-censor way to bring it publicity.

But this can only happen if Republicans act wisely. The temptation will be strong to slap a “moderate” Trump-hating Republican on the commission who will then vote with the Democrats on every issue of importance and give hideously biased and politicized findings a sheen of “bipartisan” legitimacy. Others will seek out big-name pro-Trump figures who are over-the-hill and lack the energy and intensity needed to make the most of the commission.

We understand that the chances of this Commission being used for its actual purpose are slim, and that procedurally the deck will be stacked against us. And to count on the Republicans to do anything right might come across as the height of delusion — after all, since when have they ever done anything right? These are valid concerns and Revolver has great respect for those patriots on our side who have raised concerns about the commission.

But the deeper truth is that the establishment’s MAGA blood libel narrative relating to 1/6 is not going away, whether we have the commission or not. The false narrative is simply too important as it is the pretext behind an unprecedented political repositioning of our entire national security apparatus against the American people who are MAGA supporters or MAGA-adjacent.

Perhaps the delusional take is not that the Commission could be weaponized for good, but that by killing the Commission we can kill the narrative that the establishment is trying to use it to advance.

If the Commission takes place, it is up to us to achieve this. Make no mistake: a full and honest inquiry into the truth of 1/6 is not bad for MAGA, it is bad for the globalists, and for the corrupt ruling class of the Globalist American Empire who are using false narratives as a pretext to launch a domestic civil war on their own citizens.

Rest assured, commission or not, Revolver News will continue to be at the forefront of exposing the dangerous lies behind the 1/6 narrative, and the sinister agenda these lies are ultimately meant to serve.

This fight is not over. Not by a long shot.

We’ve got something very big coming that could change the game entirely.

Strap in and stay tuned.