There’s finally something to celebrate in the not-so-friendly skies. Thanks to a lovely and patriotic 35-year-old Trump-appointed judge in Florida, nobody has to wear masks on airplanes anymore.

The BBC reported that U.S. District Judge Kathryn Kimball Mizelle ruled that the CDC exceeded its legal powers in issuing the mask mandate. So now, the TSA has said it would no longer enforce mask-wearing. And it looks like the Biden administration is not even going to bother asking for a stay on Judge Mizelle’s ruling in court. The DOJ is punting the whole issue to the CDC, who will probably just capitulate on the mandate soon.

DOJ’s statement says appeal is dependent upon CDC analysis, so theoretically they would not appeal if the CDC suddenly decides to reverse course on mask mandate.

The good judge has a pretty “based” resume, if we do say so ourselves.

This is Kathryn Kimball Mizelle. She is a Federalist Society judge who worked for Clarence Thomas. The American Bar Association said she is unqualified to hold office, but Republicans confirmed her anyway after Trump lost.

The CDC had just last week decided to extend the mandate until the third of May before Judge Mizelle issued her ruling. The BBC explained further:

Judge Mizelle is based in Florida, but federal judges can issue rulings that block nationwide government policies.

Her order on Monday effectively removes the masking requirement in all airports, trains, taxis, and transit hubs.

It feels like that jubilant moment in the movie “Footloose,” when everybody kicked off their Sunday shoes.

And that was the “vibe” midair when customers and flight crews learned the mandate was finally over. Planes erupted in cheers when pilots got on the speaker and announced Biden’s tyrannical mandate was kaput.

This was yet another blow to the Biden Regime, who had a front-row seat to watch Americans hoot and holler that another one of Joe’s unconstitutional mandates was shot down.

“Ladies and gentlemen, this is your pilot speaking. This is the most important announcement I’ve ever made. The federal mask mandate is over. Take off your mask if you choose!”

Needless to say, liberals are not handling the news well.

When Trump nominated her to the federal judiciary, Kathryn Kimball Mizelle had never tried a case, civil or criminal, as lead or co-counsel, since her admission to the bar. She spent 10 months at a firm and 3 years in government practice. The ABA rated her Not Qualified.

I also think the Biden Administration should maybe ask for an appeal. Otherwise every time the CDC wants to do its job, you risk having some antiscience judge with a political agenda working to undermine things and sabotage public health.

It’s interesting because it wasn’t so long ago that these same liberals were applauding “activist judges” who were stepping in every few minutes to rule against President Trump.

Now that it’s happening to them, they’re freaking out and crying “foul.” 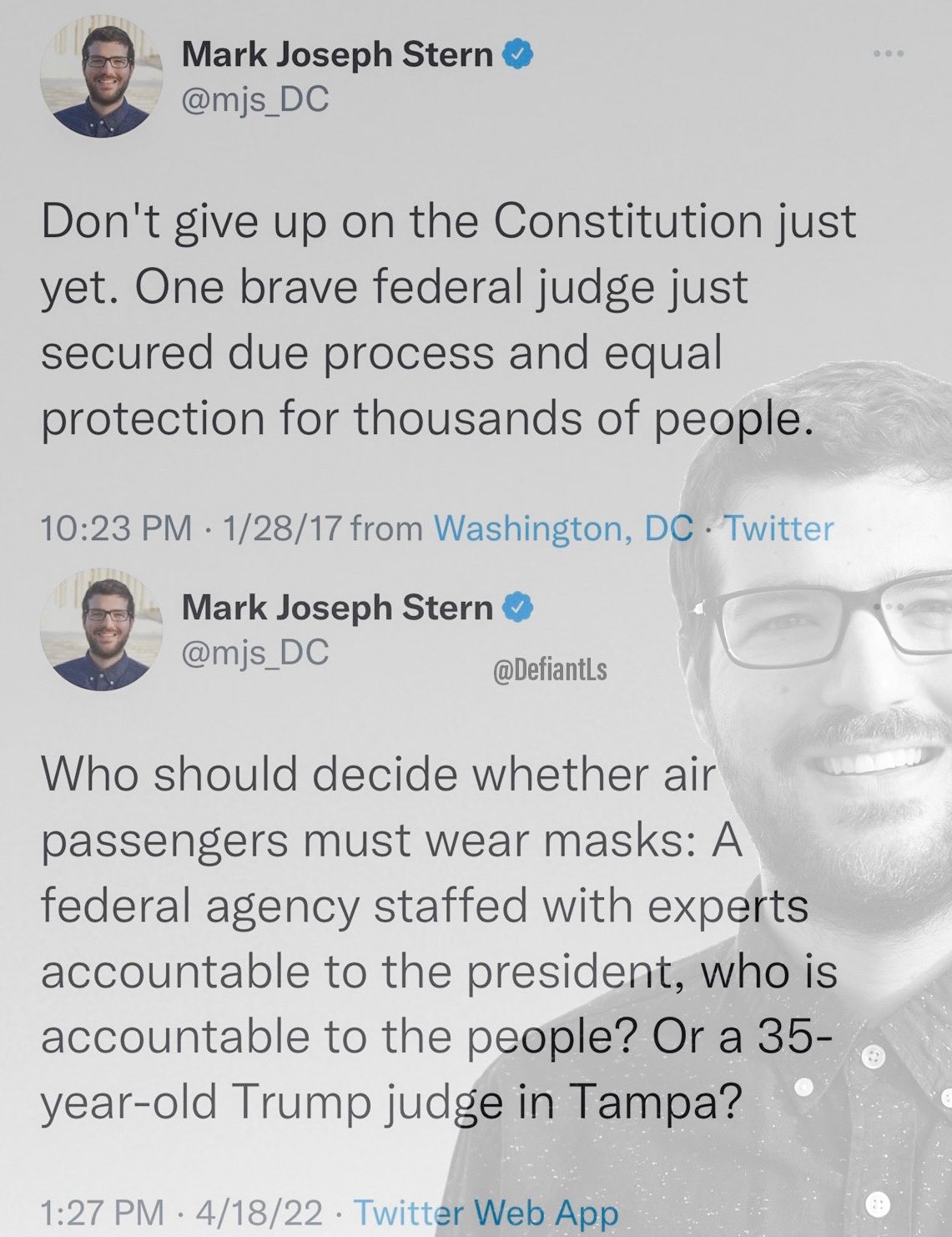 And losing their minds…

We as a nation are fucking hellbound to destroy ourselves. We are addicted to self-destruction — all at the behest of the corporations and politicians who will gladly use our bodies as firewood. https://t.co/MxPlXtLOYa

It's a pro-death movement. Sigh. https://t.co/YcGNzhG8tg

Thank you, Judge Mizelle, for giving decent, hardworking Americans a slice of freedom back and making liberals cry again.