In the days and weeks after George Floyd’s fentanyl overdose, America’s universities proudly proclaimed an imminent “racial reckoning” on campus. “Diversity,” understood in a very specific way, became the top objective. Harvard’s university press published books on how to eliminate schools that were “too white.” Activists demanded the abolition of “white supremacist” standardized tests, and dozens of schools swiftly complied.

Two years have passed. Last fall, American colleges welcomed their first 100% post-George Floyd classes, and the results are clear: At one elite school after another, ordinary white Americans are being treated as academia’s “undesirables” and are slowly being cleansed out.

On June 13, University of Chicago freshman Daniel Schmidt posted a Twitter thread that quickly went viral. The thread described the class profile of the school he was attending.

I just finished my freshman year at an elite university that costs $80,000 annually (University of Chicago).

The students at a school like this are future politicians, billionaires, etc.

Here are 5 observations I made this past year about them that may shock you:

Every time I do meet a white kid who appears to be middle-class, I shortly learn they are actually Hispanic and marked Hispanic on their college application, giving them significant help via affirmative action.

Shortly after his thread, Schmidt appeared on Fox News to repeat his story.

Elite institutions want to blacklist middle-class white Americans because they are the group most likely to challenge the ruling class.

I think the only reason I got into UChicago, as a white male, is because I am low-income.

It is a fascinating personal account. Schmidt’s claims about wealth and sexual orientation are hard to measure, though a (non-randomized) 2015 campus climate survey found only 76 percent of men, and 68 percent of women, identified as exclusively heterosexual at UChicago. But Schmidt’s claims about race certainly can be measured. Do the facts bear out his story? Are ordinary middle-class, middle-American, heterosexual whites vanishing from the University of Chicago? There’s a lot of evidence they are.

The University of Chicago avoids saying how many whites attend — nobody wants that information — but in 2019 its freshman class was 22 percent Asian, 10 percent black, and 16 percent Hispanic. Two years later, much had changed. The freshman class of 2021 was the first one whose entire application cycle took place after the great “racial reckoning” of 2020. And sure enough, its numbers shifted greatly from just two years before. This time around, 27 percent of freshmen were Asian, 10 percent were black, and 19 percent were Hispanic.

It’s unclear whether these figures include or exclude international students, and there also aren’t precise figures for multiracial students or the handful of American Indians and Pacific Islanders who must attend the school. But the shift is so dramatic it still tells a clear story: UChicago’s white percentage has dropped roughly eight percentage points in just two years, from about 52 percent to 44 percent.

America’s demographics are changing rapidly, but they aren’t changing that rapidly. Whites are still an absolute majority of public high school graduates (and both private high schools and homeschooling are whiter than public schools). From 2019 two 2021, the composition of public high school graduates changed from 53.2 percent white to 52.0 percent, a drop of just 1.2 percent. UChicago’s two year shift was more than six times the actual rate of change nationwide.

UChicago isn’t alone: All across America, two years into the media-announced “racial reckoning” of America, top universities are squeezing out white Americans for the sake of admitting others from more preferred racial categories.

Last week A New Radical Centrism, a dissident Twitter account, highlighted that at John Hopkins University in Baltimore, supposedly only 19 percent of the most recent class are Caucasian.

Johns Hopkins directly confirms the figures in its statistics. 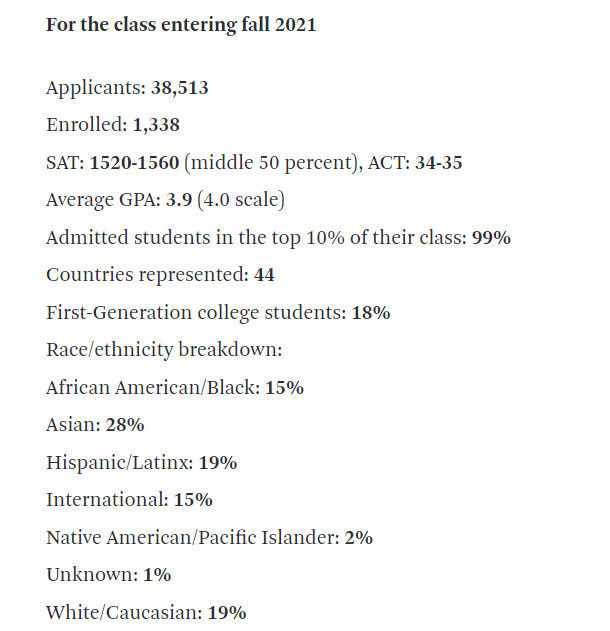 Strip out the 15% international students (which are typically treated as ‘null’ for race purposes), and whites are just 22.4% of JHU’s domestic undergraduate class, less than half their share of the country’s actual high school graduate population. Even in Maryland, whites are about 40% of public high school seniors.

But perhaps JHU has always been shunned by white students? Not so. The class of 2021, just four years ago, was 50% whiter.

Just two years later, America’s other three major racial categories were all steady or higher, but whites were down five percentage points.

Look around and the same pattern is unfolding over and over:

The pattern is consistent: At one elite school after another whites are already a minority, and their numbers are falling faster than mere demographic change would predict.

All of this would be perfectly defensible, of course, if it simply reflected the outcome of a fair admissions process. But it doesn’t. Even before 2020, America’s university admissions have been nakedly discriminatory based on race. Data uncovered by the Students for Fair Admissions v. Harvard case shows that whites have the second-lowest admissions rate at Harvard, despite having the second-best academic profiles behind Asians, who also face discrimination.

White students already faced discrimination in college admissions before 2020. But over the past two years, this discrimination seems to have ramped up.

What is going on? It is impossible to know the exact mechanisms without university’s private internal documents, but it’s easy to think of a plausible hypothesis. The 2020 “racial reckoning” has produced more pressure than ever to maximize “diversity.” Over the past two years, using Covid and equity as excuses, the vast majority of American colleges have made their admissions” test-optional,” no longer requiring objective measures like the SAT or ACT from applicants. At the University of California, admissions officials aren’t even allowed to consider the scores of applicants who did take tests.

The purpose of going test-optional is clear-cut and frequently stated by the people advocating such policies: admit fewer whites and more non-whites who have relatively lower scores:

The pandemic forced a pause on colleges requiring standardized testing, long the gold standard for admissions in the U.S. As Covid-19 restrictions ease, widespread mandatory reliance on the ACT and SAT entrance exams isn’t springing back as quickly. One reason is that schools anticipate more Covid disruptions and want to provide predictability to applicants. Another is concern over large race-related gaps in SAT scores, which have been blamed for unequal educational opportunity for non-White students.

Meanwhile, the Students for Fair Admissions lawsuits against Harvard and UNC are still alive, and scheduled to go before the Supreme Court this winter. Those lawsuits have embarrassed America’s elite schools and exposed their widespread anti-Asian discrimination. It’s possible that, to sway the Supreme Court away from banning racial discrimination in admissions altogether, schools may be easing up on their de facto quotas on Asian students. It probably doesn’t hurt that there’s also a media forcememe about a surge in anti-Asian hate crimes, allegedly caused by Donald Trump, even though the crimes themselves are mysteriously concentrated in Democratic urban centers and obviously overwhelmingly committed by blacks.

So more Asians are being admitted, and there’s pressure for more blacks, Hispanics, and American Indians to be admitted too. But if those groups are going to grow, another group has to take the hit. Fortunately for America’s admissions gatekeepers, the decision is easy: just crush the kulaks.

The modern American regime is built on explicit, institutionalized hostility to the people who most resemble the great Americans of the past. It is anti-white, anti-male, anti-Christian, anti-rural, and anti-middle class. The more of these traits a person has, the more worthy of hate they become. The more the Globalist American Empire decays and squanders the inheritance it was given, the more bile and hatred it directs against those who symbolize what came before.

The white American middle class has become America’s kulaks — blamed for every problem, vilified for every success, and deserving of every punishment. Their destruction has become a fundamental goal of American political life.

READ THE REST… Are You Ready to Be an American Kulak?

And yet, hope still remains. Perhaps the shift does not only reflect the increasingly anti-white attitudes of America’s college administrators. It may also be that American parents are heeding the advice of Revolver, and refusing to play by the rules of a rigged system.

After all, America’s repulsive racial spoils system actually runs on the honor system. This honor system is why Elizabeth Warren was able to parlay bogus family lore about “high cheekbones” into an Ivy League professorship.  Sure, an entirely white person trying to claim black identity might raise an eyebrow. But Hispanic identity? Please. The entire identity is a fabrication of the Census Bureau. There is no genetic test that can tell whether a person is “Hispanic.” Japanese from Peru, Germans from Chile, and Mixtecs from Oaxaca all qualify. There is absolutely no authoritative database of who is a real Hispanic and who isn’t.

For families willing to take a risk, the opportunity is right there: Get ahead by faking a minority identity. Already, this generation’s Shaun Kings and Ben Jealouses are getting a leg up by presenting as the heirs of American slaves, and 100% European teens are writing bogus essays about their beloved abuelas who left Argentina at age 5. In comparison to that, fabricating a racial identity outright is actually more noble, because it directly undermines an evil system rather than perpetuating it.

If you are a white American high schooler, or the parent of one, then America’s academic cartel despises you. You’re the kind of person they will always want less of, and will always tweak the rules to harm and exclude you. Defrauding them in return isn’t merely justified. It is a moral necessity.