With our coverage of Ray Epps, Scaffold Commander, and the ever-elusive MAGA Pipe Bomber, we at Revolver have done our part to thoroughly discredit the mainstream narrative of January 6.

Most of America, of course, has moved on from January 6, regardless of how it voted in 2020. But then, there are the diehards: The collection of people for whom a few hooligans in the Capitol was the most psychologically traumatizing event of their entire lives.

And now, they have a comic book. Fresh from OneSix Comics, it’s… “1/6: The Graphic Novel”! 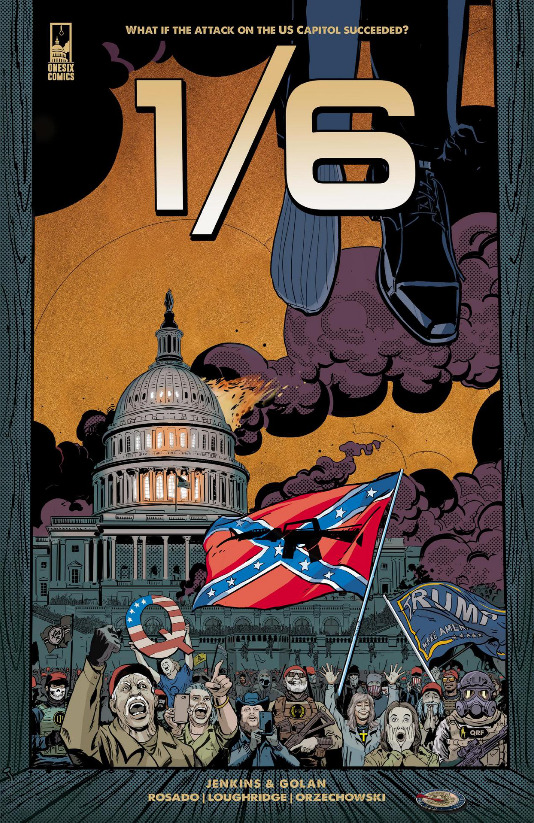 1/6: The Graphic Novel asks and answers the question: what if the January 6, 2021 Insurrection had been successful? In an entertaining, chilling, and sometimes humorous form, 1/6 illustrates how close we came to authoritarian rule in the United States, demonstrating how strategic disinformation, racial and religious bigotry, and cynical political ambition convinced millions of ordinary Americans to reject cherished constitutional values and support violent sedition.

Harvard Law School Professor Alan Jenkins and New York Times bestselling graphic novelist Gan Golan have teamed up with veteran comic book artist Will Rosado to depict, in chilling detail, what the Insurrectionists and their allies had planned on that day, the threats to our democracy that remain, and what can be done about it. 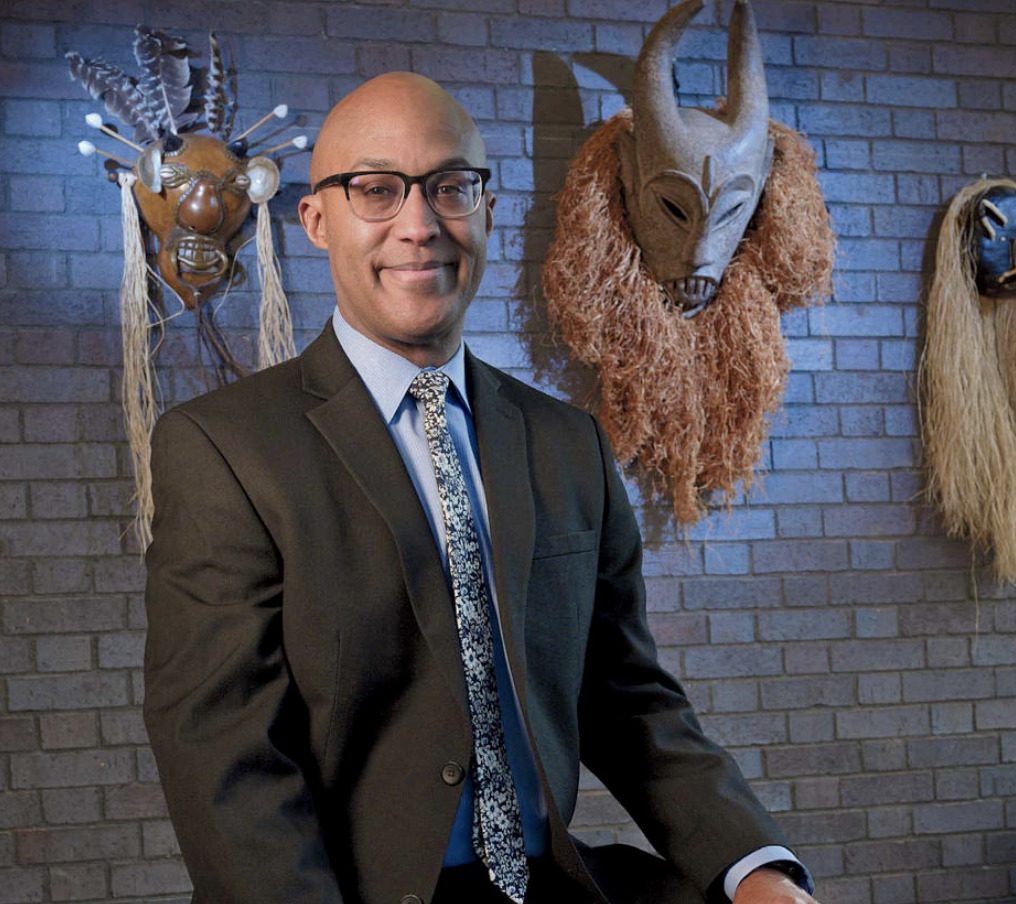 He’s come a long way from Los Pollos Hermanos (we kid! we kid!). 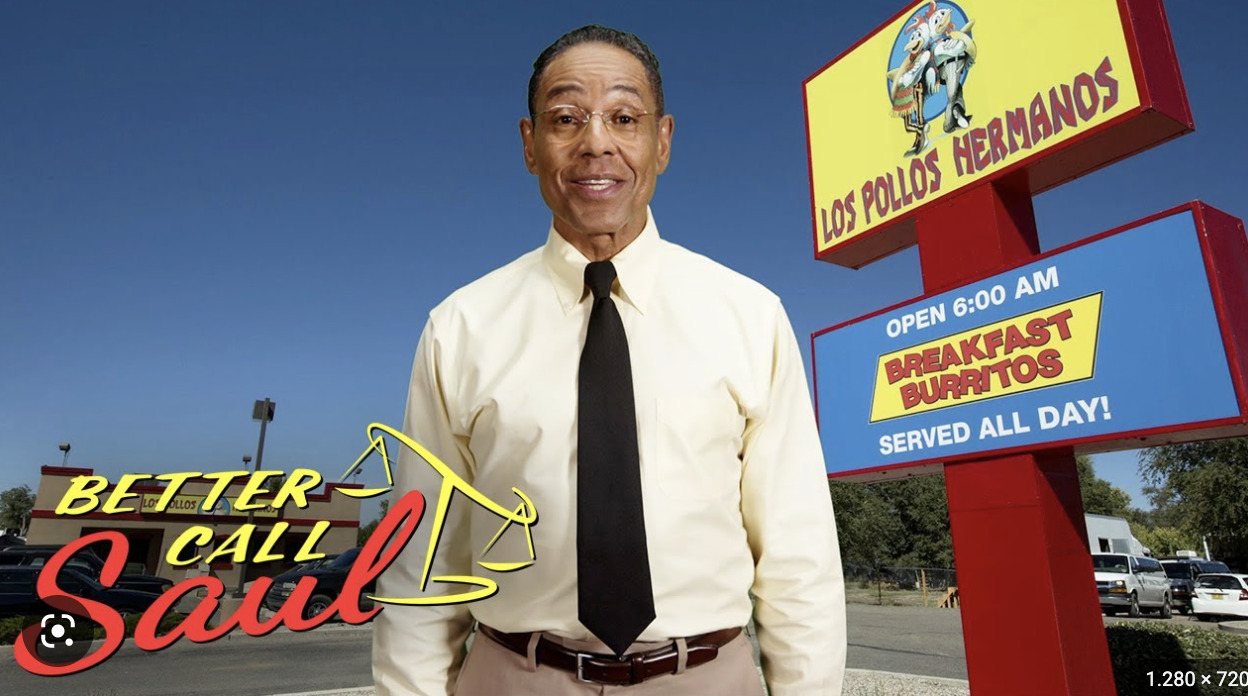 You won’t find any Ray Epps in this graphic novel, or federal provocateurs. In fact, in the first volume, you won’t even find the events of January 6. Instead, the story opens an unspecified amount of time afterwards, when America (or some portion of it) has become a fascist state ruled by MAGA militias. The cover and text hints at the story’s point of divergence: the largely unarmed 1/6 crowd actually does hang Mike Pence, but the killing is blamed on Antifa and used to justify a massive purge in American politics.

Does this bother us? Of course not! This comic is hilarious. We have published several satirical pieces here at Revolver News, but never in a million years could we have concocted a work as shrill, ludicrous, and hysterical as this one. “1/6: The Graphic Novel” is set to run for four issues, and we’re already sad it’s not scheduled for more. We look forward to reading every volume the moment it comes out.

For now, here are Revolver’s nine favorite details from Volume 1.

1. The story opens with a team of special forces storming a CNN-esque news station, and executing the staff without a trial. 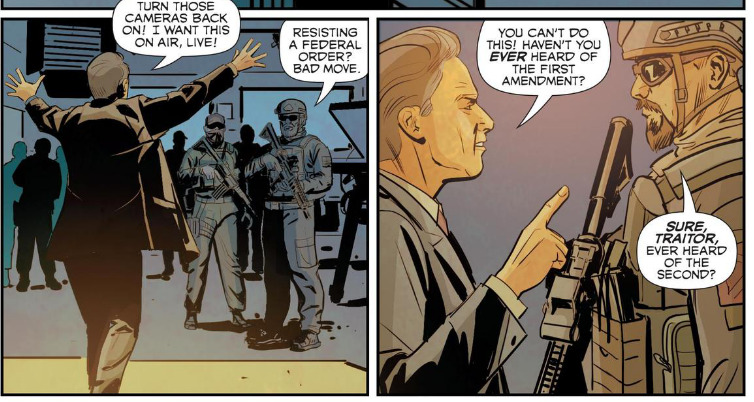 2. The murdered news anchor is replaced with a new one, and apparently, the new anchor is supposed to be Tucker Carlson. Only problem is, he looks more like Mitch McConnell in a toupee. 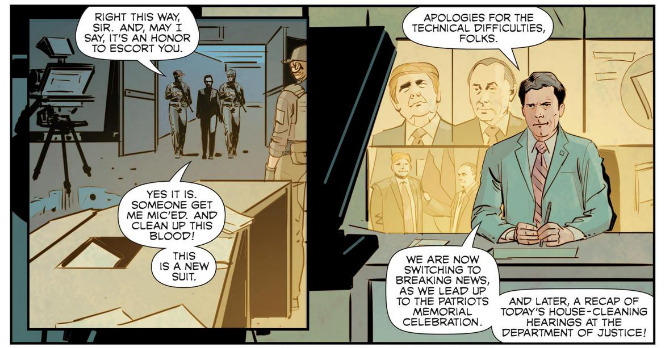 3. The comic is peppered with allusions to off-screen events that are apparently supposed to be very bad.

Wait, this is a dystopia?

4. The official 1/6 Memorial dedication is too amazing to parody. 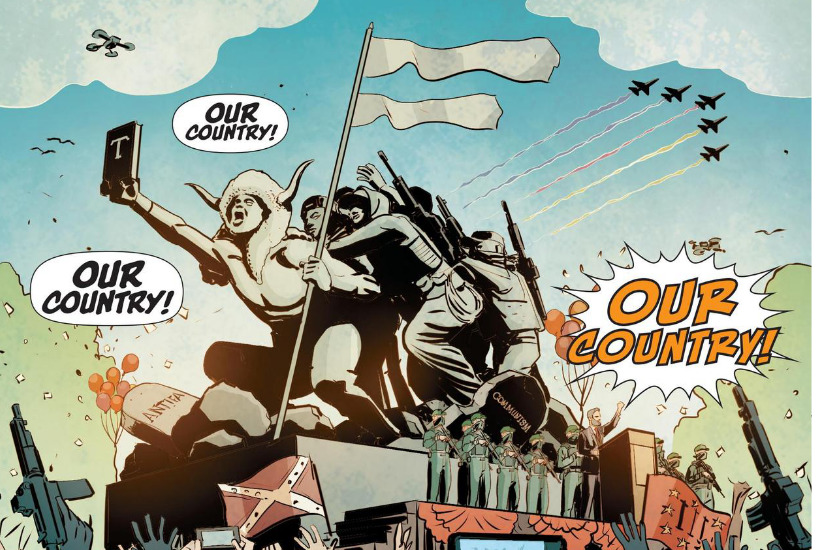 5. The old Thurgood Marshall Federal Judiciary Building has been renamed in honor of a far better black Supreme Court justice… and also his wife, for some reason.

The building’s courtyard is dominated by a massive statue of Clarence Thomas and Donald Trump both waving gavels. 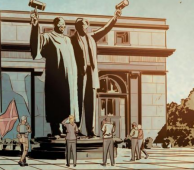 6. How can you tell that America is ruled by militias? Because they literally drive through the streets of D.C. spraying gunfire into the air. 7. The climactic moment of the first issue comes when a group of underground dissidents discovers the long-lost Electoral College ballots! (Dun dun dun!). 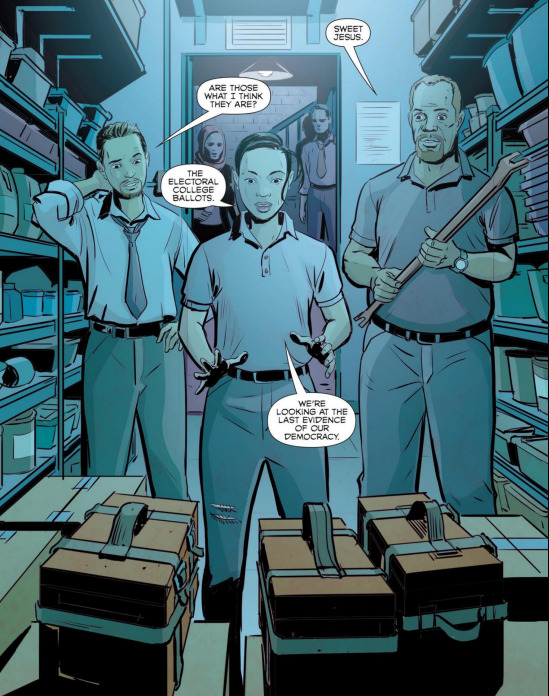 And of course, it wouldn’t be a leftie dystopia without one of the dissidents sporting a full hijab. 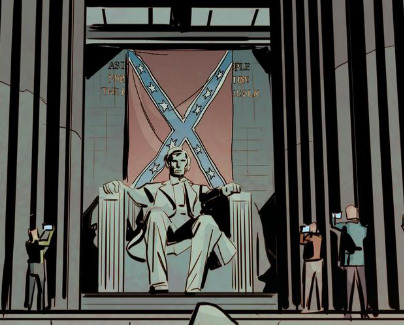 The imagery in the comic book is a little inconsistent. While the illustrators sometimes just plaster the Confederate flag everywhere, at other times they suggest the post-1/6 regime has even less subtle imagery.

9. This part even we’re a bit baffled by. A mom with a newborn baby at a rally is feeding him with a “Stand Back and Stand By” baby bottle? 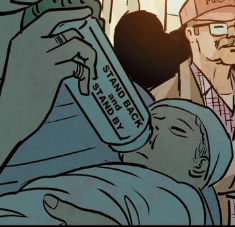 Is the idea that the baby is a “proud boy”? Your guess is as good as ours.

We will keep track of future installments of the graphic novel for your entertainment and edification. Stay tuned.