UPDATE: Turns out the victim was a registered sex offender. Details here.

Very sad scenes unfolded last night on the streets of Kenosha, Wisconsin, as an apparently law-abiding citizen shot multiple rioters in an apparent act of self-defense against a violent, lawless mob. Ironically, the anti-police rioters cried out “CALL THE POLICE” after their friend was shot.

I will update who shot him! pic.twitter.com/xZ6v5mpI82

More details from the Daily Mail:

Two people were killed and another was wounded as shots were fired late Tuesday in Kenosha during the third night of unrest in Wisconsin following the police shooting of black man Jacob Blake.

The shootings were reported at about 11.45pm after police drove away protesters from in front of a courthouse that has been the site of the main clashes between protesters and authorities.

Footage showed gunshots ringing out amid a scuffle in the street while bystanders screamed and fled in terror, with one person shot in the arm and another one hit in the chest.

Panic broke out as another man lay in agony ‘losing a lot of blood’ after he was shot in the head, with onlookers desperately trying to stem the wound and yelling that ‘we’ve got to keep him alive’.

Another man was helped to his feet by cops after bleeding heavily from a wound to his arm as law enforcement vehicles approached.

One of the victims was shot outside an auto garage, where the gunman was apparently caught on video saying ‘I’ve just killed somebody’ before he was pursued down the street carrying his rifle.

As the crowd gave chase, one pursuer took a flying kick at the gunman and another tried to grab his weapon before he started firing to disperse the crowd, hitting another two people.

Three people were shot in total and two of them were killed, police confirmed in the early hours of this morning – but it is not clear which victims died and the identity of the shooter is not known.

Police are hunting for a man with a long gun and fear that the shooting stemmed from a conflict between ‘self-styled militias’ defending their properties from looting and demonstrators voicing anger at the shooting of Jacob Blake. [Daily Mail]

Here’s a video with some of the amazing footage. In the video, the looters attack the man like a horde of zombies, and he just starts shooting them like in a zombie apocalypse movie.

Very sad that has come to this. Pretty hard to argue that he was acting in anything but self-defense.

A Molotov cocktail appears to have been thrown at the shooter in Kenosha before he fired at the first victim. pic.twitter.com/DPVgjepDsb

Americans have understood for generations that the only way to stop violent looters and mobs is by shooting them in self-defense if they threaten your property, person, or your family. 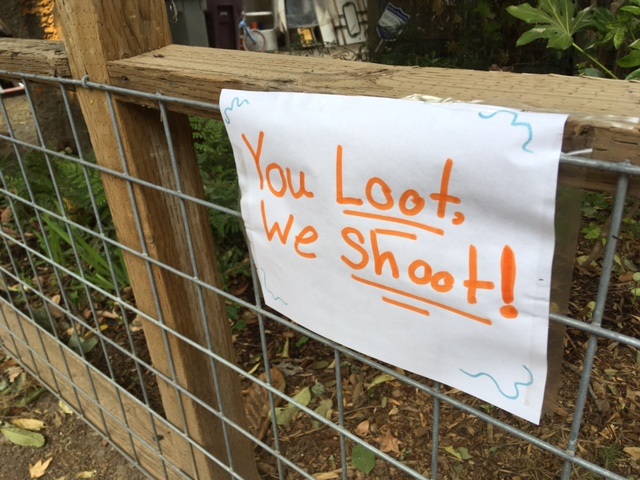 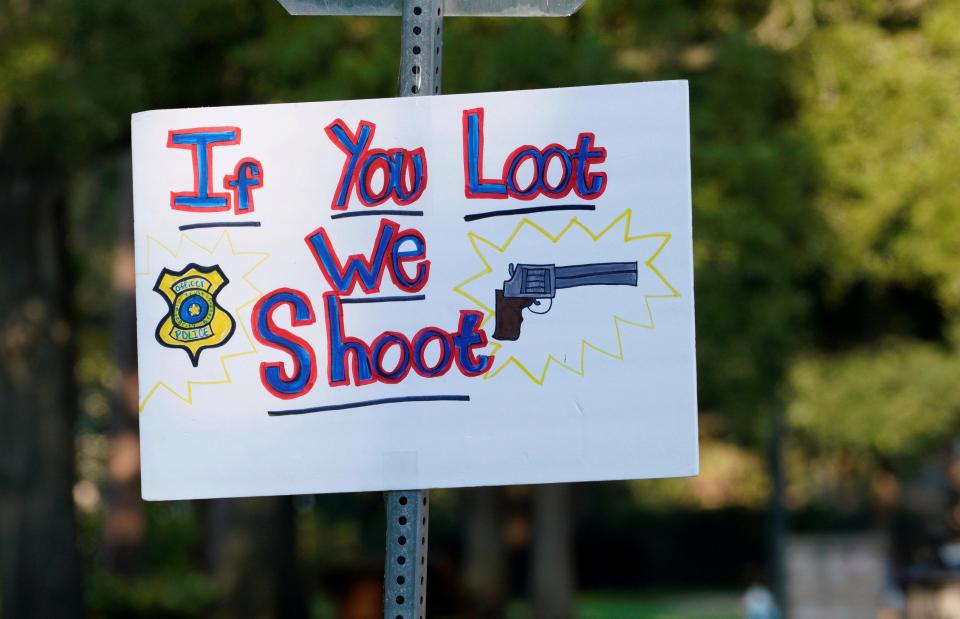 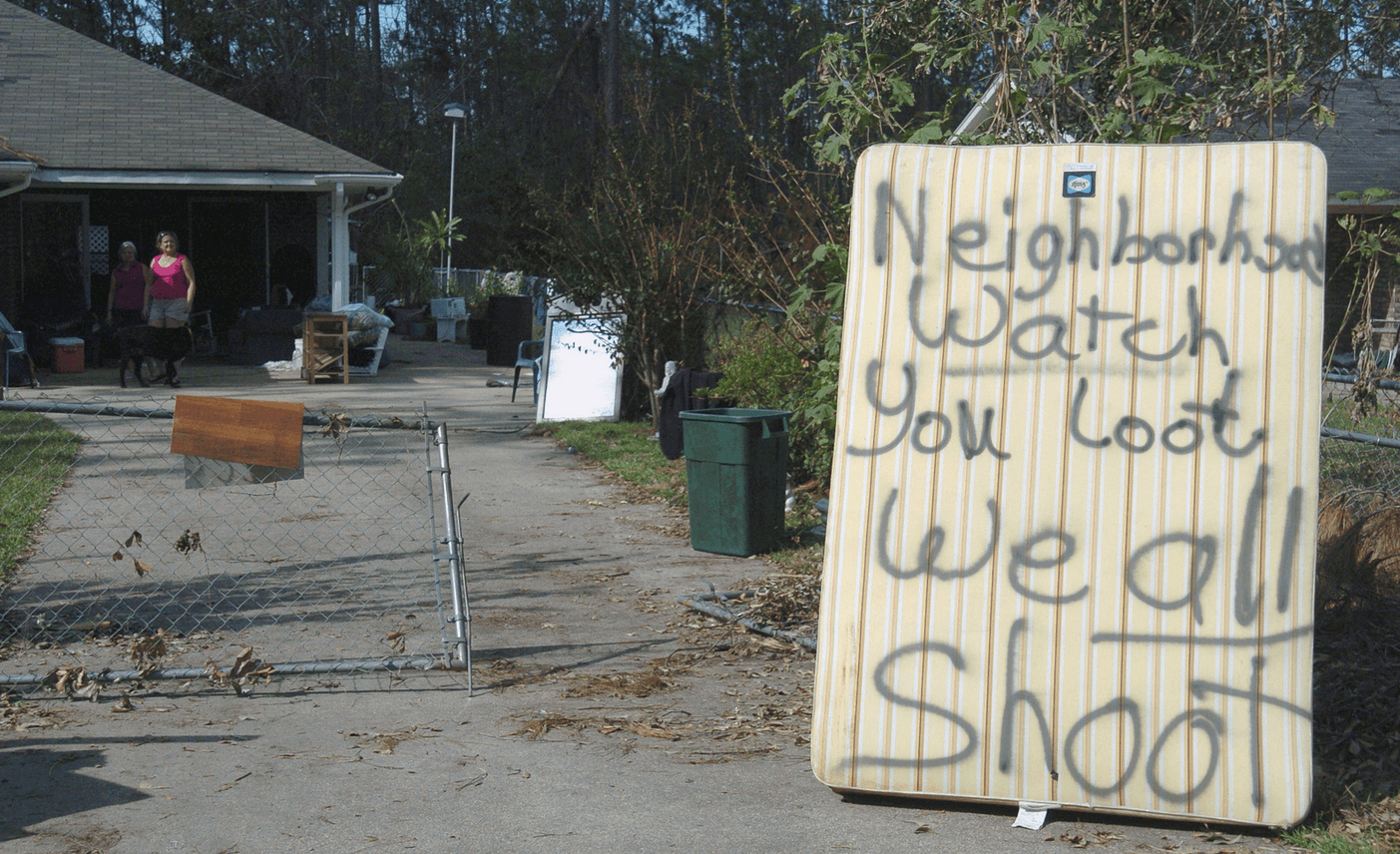 One of the looters who attacked the gunman got a massive chunk taken right out of his arm. [GRAPHIC]

This is one of the violent ARMED anarchists that chased down & attacked an innocent armed man who was protecting businesses in Kenosha, Wisconsin.

He nearly got his arm blown off in self defense. Why was he chasing & attempting to possibly kill a man protecting businesses there? pic.twitter.com/DZwPdhbPWE

Kenosha police reported two were killed and one wounded.

This self-described “progressive” looks like he takes daily yogurt enemas. The people of Wisconsin actually chose this Democrat to be their governor in 2018.

Our Constitution guarantees the right to peaceably assemble.

Congress shall make no law respecting an establishment of religion, or prohibiting the free exercise thereof; or abridging the freedom of speech, or of the press; or the right of the people peaceably to assemble, and to petition the Government for a redress of grievances. [Cornell Law]

There is no right to violent protest or seditious revolution. If Attorney General Bill Barr was serious and strong, he would throw the book at some of these rioters in federal court, and also go after the main financiers and organizers of Antifa. But unfortunately, Attorney General Barr appears to be mostly scared and reactionary, only acting in hindsight and never tactically or strategically, which is unfortunately quite common among conservatives these days. Back in July, Revolver exclusively reported that Barr was terrified and frozen over with panic.

REVOLVER EXCLUSIVE SCOOP: One White House source and one DOJ source have independently confirmed that the DOJ is deliberately resisting putting an active FBI presence in riot torn Portland and Seattle.

Two sources close to the matter in the DOJ say that Barr is eager to stop the protests, but he is simply scared. While this might seem quite damning, it is an understandable human reaction. Along with the State Department, the DOJ is a key swamp stronghold and any bold actions taken against Antifa on behalf of the American people will be met with sabotage and resistance internally.

To put an end to this madness, AG Barr would be wise to do the following immediately:

First, find a handful of the most violent perpetrators and lay down the full weight of the United States Department of Justice on them. They should get the same maximal treatment usually reserved for those who expose corruption and embarrass the powerful, such as Julian Assange.

When the DOJ actually wants to play hardball, they can. Just look at the initial sentencing recommendation for Roger Stone, an absurd seven to nine years in prison for a process crime.

Secondly, the FBI and DOJ should identify ten of the top behind-the-scenes organizers and funders of these riots and throw the absolute weight of the DOJ against them. [Revolver News]

Attorney General Barr is still not being proactive. He still isn’t investigating the major donor, funders, and organizers behind Antifa. And now, citizens are taking the law into their own hands, and people are getting shot in the streets all over America.

Despite the absence of law enforcement and Attorney General Barr, karma itself appears to have dealt instant justice to some rioters in Kenosha. The man who got shot in the head was actually daring people to shoot him, earlier. Be careful what you wish for, as God will sometimes grant you exactly what you wanted in the weirdest ways.

It certainly is interesting that these rioters are overwhelmingly overeducated white women combined with violent or thrill-seeking or drug-addicted lumpenproles.

“The lumpenproletariat is passive decaying matter of the lowest layers of the old society, is here and there thrust into the [progressive] movement by a proletarian revolution; [however,] in accordance with its whole way of life, it is more likely to sell out to reactionary intrigues. – The Communist Manifesto

You can watch this video here, which has a lot of great images of the element that is gathering at these riots.

It sort of looks like a gathering of Juggalos.

Kenosha itself is a town that is only 10 percent black, according to the US Census.

What Kenosha needs now is our prayers. The chickens are coming home to roost after fifty years of unrestrained liberalism and narcissism.

Pray that Attorney General Barr wakes up and actually gets proactive in fighting this nonsense, and that the American people rise up and finally defend themselves and their communities from the forces of hell.