While the Press Runs Away, Americans Live Under a Deadly Reign of BLM Terror

Without Googling, do you recognize and can you name these two people? pic.twitter.com/QmQyNgJlca

Everybody recognizes Kyle Rittenhouse by now, but we doubt one person in a hundred can name Darrell Brooks Jr. on sight. Even now, can you remember who Darrell Brooks Jr. is? Probably not. To jog your memory, Brooks drove an SUV into a Christmas parade in Waukesha, Wisconsin, killing six people and injuring sixty-two others.

Brooks’s attack came just two days after Rittenhouse’s acquittal. He had a history of posting support for BLM and violent anti-white screeds on social media:

Brooks was almost certainly motivated at least in part by anti-white animus for his attack. That should matter, given the press does everything it can to fan anti-white resentment in the United States. Yet the Waukesha attack has already been memory-holed. The New York Times hasn’t even written about it since last November. Yet the Charlottesville car attack, which happened five years ago and killed a single person, is still a regular topic at the Times.

This case is hardly exceptional. A little over a week ago, Frank James allegedly shot 10 people on a New York City N train. Mercifully, he failed to kill anyone, but the attack could easily have been a bloodbath.

What motivated James to go on a killing spree? A fanatical hatred of white people.

A troubled man who railed against Mayor Eric Adams and made bizarre, threatening rants on YouTube has been identified as a person of interest — and now a suspect — in the savage Brooklyn subway attack that injured at least 23 people Tuesday morning, officials said.

The person of interest ranted about race issues and claimed that the Russian invasion of Ukraine was proof that black people were treated with disdain in society.

“These white motherf—ers, this is what they do,” he said. “Ultimately at the end of the day, they kill and commit genocide against each other. What do you think they gonna do to your black ass?”

In his rambling conspiracy theory, James claimed that a race war would follow the ongoing conflict in Europe.

“It’s just a matter of time before these white motherf—ers decide, ‘Hey listen. Enough is enough. These n—ers got to go,’” he said.

After James’s arrest, countless outlets were determined to minimize and excuse the nonsense he spewed. CNN even went so far as to say James “repeatedly espoused hatred toward African Americans,” implying he simply was angry with everyone rather than having a particular fixation on whites.

There will be no “reckoning with racism” over James’ attack.  By May, even the New York press will have forgotten James. He will be memory-holed, just like Darrell Brooks.

Even while James was at large, the press avoided mentioning that he was black even though his quick capture might help save lives. This was no surprise. As shown by a Washington Free Beacon analysis published Thursday, the U.S. press reliably and predictably suppresses stories that undermine regime racial narratives:

The Free Beacon collected data on nearly 1,100 articles about homicides from six major papers, all written between 2019 and 2021. Those papers included the Chicago Tribune, Los Angeles Times, New York Times, Philadelphia Inquirer, San Francisco Chronicle, and Minneapolis’s Star-Tribune—representatives of each paper did not return requests for comment for this article. For each article, we collected the offender’s and victim’s name and race, and noted where in the article the offender’s race was mentioned, if at all. 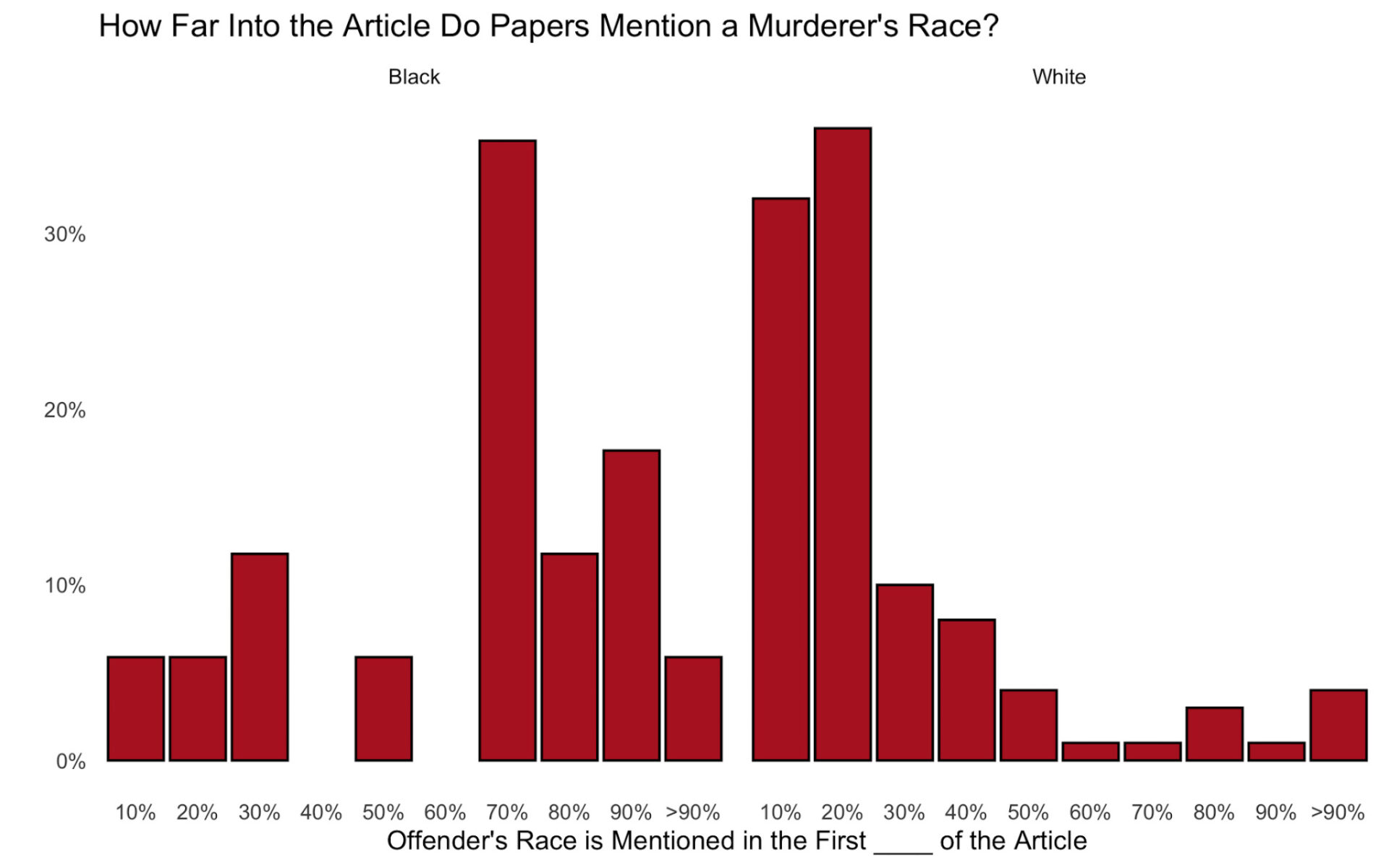 The Free Beacon also found that, since the George Floyd-induced “racial reckoning” began, newspapers roughly doubled the rate at which they mentioned the race of white criminal suspects, while halving the rate they mention black ones. 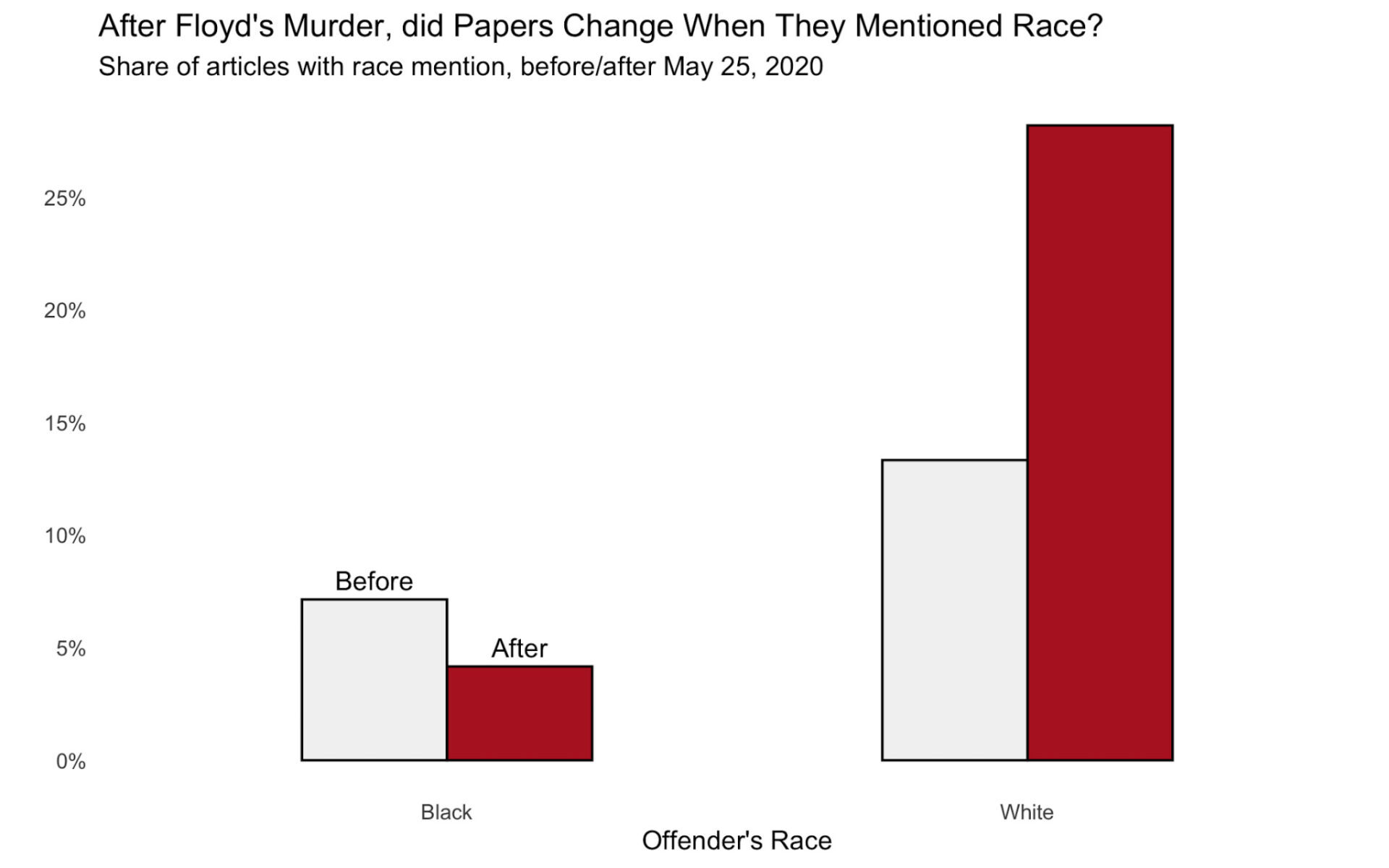 When a white American commits a spectacular crime, the press makes sure you knows about it. If there is the slightest reason to believe the crime is motivated by “hate,” you will definitely know about it. But when whites are the targets of racial terrorism, the story demands either nuance or outright silence. Or, to cite the online comic Stone Toss:

What’s going on? Chances are, you already know: America is facing a wave of BLM-motivated terrorism, which the press ignores and downplays in favor of a fake panic over “white supremacist” terrorism.

According to the FBI and the Department of Homeland Security, America’s greatest threats are “white supremacy” and “far-right” domestic terrorism. These are the concerns that warrant constant vigilance and vastly-expanded censorship and surveillance powers.

“Specifically those who advocate for the superiority of the white race,” Mr. Garland told the Senate Appropriations Committee.

Mr. Garland said that “if there has to be a hard hierarchy of things that we prioritize,” the Jan. 6 attack would be at the top because it most threated [sic] democracy.

This is a lie. Right-wing and “white supremacist” terrorism is clearly not the greatest domestic threat to America. It’s obvious, requiring only the briefest look at actual facts.

The last right-wing attack of any note in America was in 2019, when an anti-Great Replacement extremist Patrick Crusius murdered 23 at an El Paso Walmart. Since Crusius’s spree, even oft-biased Wikipedia only lists three “right-wing” terrorist actions in the U.S. Let’s look at each of them:

Grafton Thomas, a black man, invaded the home of a Hasidic rabbi and stabbed five people, killing one. While police found journals written by Thomas filled with anti-Semitic content, the truth is that Thomas is profoundly mentally ill. He suffered repeated bouts of psychosis prior to his stabbing spree, and has since been diagnosed with schizophrenia sufficiently severe that a judge found him unfit to stand trial.

In two separate incidents a week apart, two members of the “boogaloo” movement launched surprise attacks on police in California, killing two and wounding three. But as Revolver explained back in 2020, the press’s portrayal of boogaloos as a “far right militia” is bogus. Boogaloo is broadly anti-Trump, and its members have supported Black Lives Matter and carried out violence on its behalf. Another boogaloo member, who identified as a “left anarchist” and LGBT, was arrested for trying to aid Hamas. To the extent boogaloo has an ideology at all, it is a “woke” “anti-racist” group with a left-wing anarcho-libertarian twist.

The 2020 boogaloo killers fit perfectly into this worldview. Steven Carrillo, the gunman in both attacks, appeared in court with a mask reading “BLM” and “Portland, Kenosha, George Floyd and Breonna Taylor.”

Revolver trusts that it doesn’t have to explain to its readers how bogus it is to describe January 6 as a “terrorist attack” at all. Still, if you want a refresher, feel free to check out our reporting from the past year.

But just in the 15 months since Joe Biden’s inauguration, America has had four separate, major BLM-motivated terror attacks. One of those attacks is Frank James’s rampage on the N Train last week. Another happened almost exactly a year ago, when black nationalist Noah Green smashed his car into a U.S. Capitol barricade. Green killed one police officer before being shot dead himself. The press was briefly very interested in Green’s attack, hoping that it was another “right-wing” attack by a “radicalized” Trump supporter. But they soon lost interest when it turned out that Green was merely a left-wing anti-white racist. Boring. In the words of the AP, “a car” did something:

The U.S. Capitol Police veteran killed last week is being remembered as a man with a sense of humor who loved sports and was most proud of being a dad. William Evans died when a car rammed into him and another officer at a barricade near the Capitol. https://t.co/Zs4J4OfT7a

Then there was Kentucky BLM activist Quintez Brown’s attempt to assassinate Jewish mayoral candidate Craig Greenberg in Louisville. Brown’s assassination attempt is already forgotten, yet it happened a mere two months ago. Inexcusably, while Kyle Rittenhouse spent months in jail after Kenosha until millions in bail could be raised, and many January 6 defendants have been in jail for a year without being tried, Brown got out on bail just two days after his attack.

All of this, though, is ignoring the far larger elephant in the room. In summer 2020, literally dozens of U.S. cities were convulsed by BLM-motivated riots which killed dozens, destroyed thousands of businesses, and likely caused far more terror than all “white supremacist” attacks combined in the past half-century. Even now, every city government in America lives in fear that, should something go wrong while its police arrest someone, their city could be gutted by looting, arson, and destruction while every institution lines up to justify the violence. What do you think a business owner in any American city fears more — that a white supremacist will bomb his shop, or that a “mostly peaceful” BLM protest will break out nearby?

A press that not only invents a fake menace of “white supremacy,” but also colludes to hide the real terror threat in the United States, is not a press looking out for your interests. If you need any additional proof that the American press hates you and wants you dead, this is it.